Tess is a Wall Street secretary with big hair and even bigger ambitions.  Derided for her Staten Island style, she is taken under the wing of a smoothly sophisticated mentor, but quickly learns to bear her own velvet claws in order realize her dreams.  Harrison Ford, as a dishy colleague (the girlfriend part, really) understands consent, which is refreshing for an 80s movie.  Griffith takes her own derided public image as a sexpot, and asks to be revaluated for her talent, even if the film never asks why there is room for only one woman at the top.  Working Girl points to the future, “a modern Cinderella story where the heroine is blessed with an iron will, not glass slippers” (Amy Nicholson). 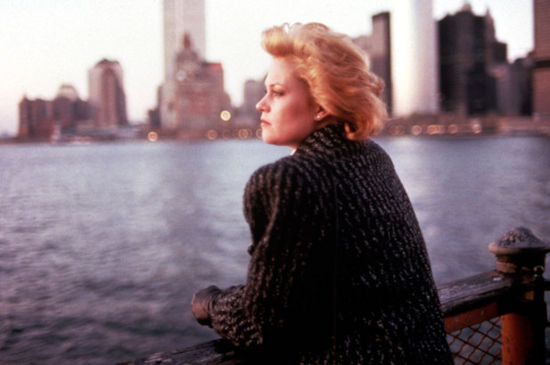 The 1980s is when the movies seem to have decided that it’s OK for women to have executive dreams.  In 9 to 5 (1980) the secretaries are capable of running the office, even if they still deferred to the male boss, no matter how incompetent.  But this film, and Broadcast News, announced that the corner office was not too distant a goal.

Working Girl is about class privilege.  Tess never expects to improve her status, because she doesn’t know anybody else who has. When she sees her female boss’ confidence in asking for a more important role, she’s inspired.  Treated as a sex object both at work by the male workforce and at home by her cheating boyfriend, she’s determined to change her destiny.

The number of movies portraying women who passionately love their work is limited.  Even more so are those in which it seems that women will continue to work after marriage, or whatever the acceptable “happily ever after.”  We only have to look at our own families to see women of previous generations socially pressured to give up careers they loved to take care of a husband and family.  In original 1928 stage play of The Front Page, there wasn’t the slightest doubt that Hildy Johnson, a man, would continue to chase down the hottest stories for the newspaper after he married (if he ever did).  But, when Hildy’s gender was flipped by director Howard Hawks’ 1940 version His Girl Friday, in which Rosalind Russell played Hildy Johnson to Cary Grant’s Walter Burns, would she continue to work after he has lured her back to the paper and his arms?  I don’t think it’s anywhere near as clear.  Our 21st century vantage point assumes Hildy would keep working, but what if dinner was always late at home?  What if there wasn’t anyone to go to the cleaners to fetch those sharp pinstriped suits?  How many real-life women silently drank in the kitchen to tamp down their frustration at being shut out of the workplace?  We prefer to think that Hildy would insist on keeping her job, and not take no for an answer. 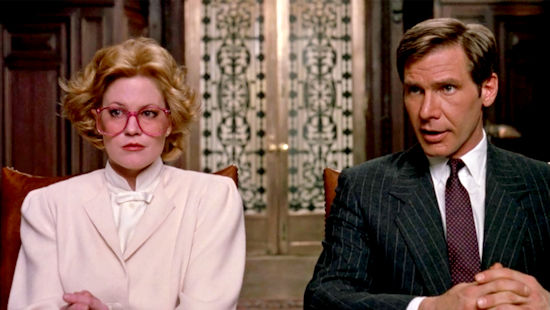 Melanie Griffith’s mother was Tippi Hedren, the last actress/muse to inherit the Alfred Hitchcock’s “icy blonde” mantle, in Marnie, and, especially, The Birds. Hedren was discovered by Hitchcock in a tv commercial and was under personal contract to him.  After the part was hers, he dictated her off-camera look as well as her hair and costume for the film. “That part I found surprising” she told biographer Donald Spoto. “He spent as much money on an outright gift of a personal wardrobe as he did on my year’s salary.” (Paglia). Her delicate beauty belied a feistiness which allowed her to withstand the strenuous and sometimes dangerous filming with real birds, which resulted in many injuries, since the birds did not enjoy being on the sound stage. Hedren was injured when a gull gashed her lower eyelid, and she became distraught over the grueling process.  Griffith, six years old at the time was given a gift by the famous director, a small coffin with a doll of her mother inside.

Griffith was a wild child. She had substance abuse issues in her teens, and moved in at 16 with Don Johnson, 8 years her senior.  She was treated like a sexpot by Hollywood, and not valued for her acting skills.  She wanted to be taken seriously, as so many beautiful women in Hollywood before her.  The producers didn’t want her for Working Girl, they wanted Shelly Long.  When they finally agreed to an audition, even though she had just flown in from London to LA, she hopped a red eye to New York.  Arriving late, bleary and disheveled, they could see how much she wanted the part.  “Just because you don’t have the credentials that people say are necessary doesn’t mean you can’t do the job,” she later told a reporter (theguardian.com).

Since there is only room for one woman at the top, Tess is pitched against Katharine for the single seat in the boardroom, and quickly recognizes that the relationship is as much one about power as with her male bosses.  Sigourney Weaver, who had just done Alien, brought her star power to the role.  As soon as Katherine steals her idea, Tess realizes she has much less advantage than she thought, and her theft of Katharine’s identity is, in her mind, a quid pro quo.  But, Katharine, played as a comic villainess, must have her own story, as well.  Weaver had some of her female Wall Street friends read the script, and they concluded, ““This awful secretary steals your man, wears your clothes, takes your office – who’s going to sympathize with her?” (theguardian.com).  Like Holly Hunter’s Jane Craig in Broadcast News, Tess has a pretty face, a soft voice and a smaller stature that makes it hard for her to be heard.  This is the dilemma of women in many workplaces, but most particularly in the movies.  Or, as Goldie Hawn says in First Wives Club, “There are only three ages for women in Hollywood:  babe, district attorney and Driving Miss Daisy.” One thing is clear, is that Tess is really alive at work, and the time spent back home on Staten Island is much less fulfilling. 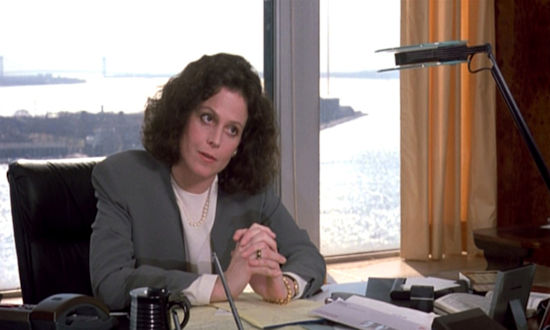 Zachary Pincus-Roth writing in the Washington Post sees Working Girl as part of a long line of “imposter comedies” where people pretend to be something other than they are, like Audrey Hepburn’s princess pretending to be a commoner in Roman Holiday, or Tony Curtis and Jack Lemmon pretend to be girls in Some Like It Hot.  He interviewed first time screenwriter Kevin Wade who said, “It was an immigrant story first and foremost,” A commuter as an immigrant — a stranger trying to assimilate in a strange land of mergers and acquisitions…There’s a fantasy or maybe a deep-seated wish that, ‘If only I could go out in the world in a way different from me, I would be accepted, and what I think is of value about me wouldn’t be questioned. That thing that you feel about yourself or that the world tells you isn’t worthy, that’s in the past.”  At some point, the imposter has to tell the truth, and the value of the relationship is if—despite all the lying—the couple can forgive and accept each other.  Wade told AMC, “It’s a story about the American Dream’s implicit promise that the door is open to anybody who has the smarts, and how America has evolved into a class system where white Anglo-Saxons run the country, and how hard it would be for someone like Tess to break through that.”  He interviewed women working on Wall Street for months to ground himself in the reality of their stories.

Working Girl harkens back to the original story of cross-class dressing, Cinderella.  Tess’s transformation does not include a fairy godmother, but there is exhilaration in her executive make-over.  Changing clothes includes an inordinate amount of time spent in lingerie (and even some topless vacuuming) which marks this as a film directed by a man, Mike Nichols.  Supposedly the vacuuming was Griffiths’ idea!  Nichols identified with the character’s immigrant status, as one himself (his Jewish family fled Nazi Germany).  And, he was courting Diane Sawyer at the time, so he was in a romantic frame of mind.

Tess’ keen observations of her new milieu allow her to make the transformation she desires, in spite of the opposition of the untrustworthy Katharine.  Jack, played by Harrison Ford, and Tess are both cheating on Katharine, in different ways.  They are flawed but will work to be better people.  As always, we have to appreciate the best that Hollywood can offer us within the timeframe.  And, as Matthew Jacobs offers on Huffpost, Ford, who made few comedies, is at his most relaxed and attractive here, even lacking the Millennium Falcon or a bullwhip.  Ford was the biggest movie star in the world at that time and chose to make the film because it was different from what he was usually offered.  Alex Baldwin was supposed to play Jack Trainer, but the studio did not want two relatively unknown actors in the leading roles, so he was demoted to Tess’s Staten Island boyfriend. 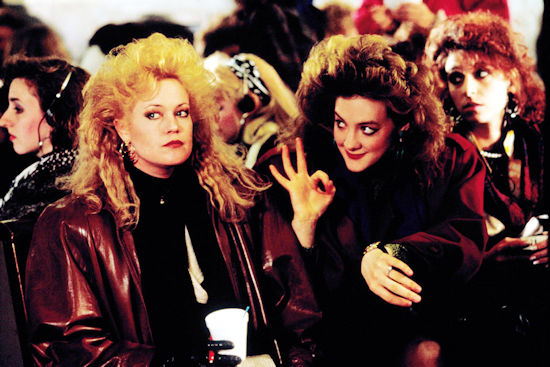 Griffith and Joan Cusack. Cusack improves every movie she is in. Please, somebody, give her an Oscar!

Nominated for Best Picture, Director, Actress, both Cusack and Weaver for Best Supporting, only winning for Carly Simon’s Best Song (it also won a Golden Globe and a Grammy).  This is a wonderful New York City movie, and among its locations, the elevator lobby scenes were shot at 7 World Trade Center (you can see the red Alexander Calder sculpture outside) which was destroyed on 9/11.  Because there had just been a financial crash, many floors of the building were empty, and they were used both for sets and production company offices. Katherine’s townhouse is at 80 Irving Place and East 19th Street.  My daughter adds the helpful information that living near the Staten Island ferry terminal means the commute to Wall Street is just an easy 30 minutes.

Melanie Griffith said, “If Tess were around today, she would be running Google. She’d have a lot of kids and maybe still be married to Jack. Playing her changed everything for me. It was great to have that life change be with such a positive story and a good message. It’s an example of how to speak up and stand up for yourself and not sell yourself out for a job or a guy. You don’t have to acquiesce to a man or a woman” (Hollywood Reporter).

There was a recent version of this story, called Second Chance, which starred Jennifer Lopez.  Never heard of it?  I saw a trailer, and then, it disappeared, going almost straight to home video.  It is not a remake, but almost a continuation, in which Lopez’ character thinks her real-life experience should have the same weight as an education.  And, I thought it was an enjoyable update!  The movie business has changed, and there is much less room for a film like this one. Because she’s JLo, she gets her chance.  Maybe she’ll get another one at a future Moviediva screening. 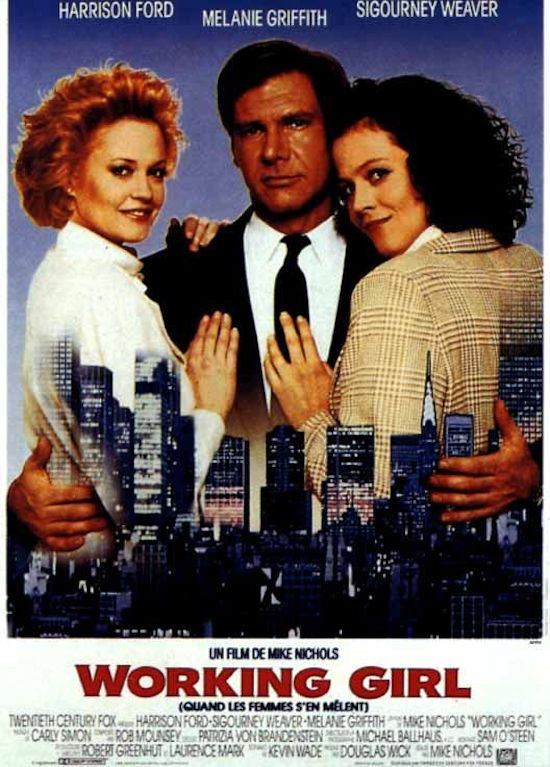