Two 14 year old girls use their vivid imaginations to find adventure, dashing wild and free through mid-century New York City.  Adapted from Nora Johnson’s autobiographical novel, one contrives a crush on a rakish, second rate pianist (Sellers) and their innocent pursuit of him eventually collides with uncomfortable adult realities.  Marketed as a Peter Sellers comedy (filmed right after The Pink Panther and Dr. Strangelove) it’s really one of cinema’s most sensitive depictions of teen girlhood and the absorbing bonds of friendship before the intrusion of boys.“One of the most enduringly funny and moving American movies ever made” (The New Yorker)

After the critical success of Booksmart earlier this year, reviewers remarked on the relative lack of teen movies focused on female friendships.  The girls of that film were high school seniors, perhaps, this films hints at what Booksmart‘s Amy and Molly might have been like in an earlier grade.  Middle school girls often form obsessive friendships, living in a world of their own making, set apart both from their parents and older teens.  I had such a friend (and she, too was a classical pianist) and although this film involves considerably more hijinks than my life, I recognize the vibrant, enclosed world of Val and Gil, and suspect many of you will, as well.

The World of Henry Orient was based on an autobiographical novel by Nora Johnson; she collaborated on the script with her father, the great MGM screenwriter, Nunnally Johnson.  He wrote in many different genres, including the scripts for The Woman in the Window, How to Marry a Millionaire, The Three Faces of Eve and The Dirty Dozen.  For a while, he was the highest paid writer in Hollywood.  Nora’s first novel was The World of Henry Orient, published in her early 20s.  A child of Hollywood, her obituary noted that Humphrey Bogart and Lauren Bacall attended her birthday parties.

Nora based her book on her experiences at the Brearley School on Manhattan’s Upper East Side.  As a girl, she and a friend named June had nurtured a crush on the pianist, George Gershwin intimate, film star and raconteur Oscar Levant.  “Levant” means Orient in French, which (unfortunately) gives the screenwriter, director and production designer a chance to incorporate some naive cultural appropriation which has not aged well.  Henry wears silk pajamas in his Chinese red lacquer apartment, and the giggling girls incorporate a little pidgin English, kowtowing and straw Coolie hats into their stalking routine.  I urge you to overlook this awkward, dated worldview.

Nora Johnson was writing short stories at the time, and her father was discouraging, “’ My belief about the idea of June and Oscar Levant is that it doesn’t seem to have enough body for a whole book, it sounds more like a short story…wait a year or so and think about it again.’ But the story haunted me, and he began to come around” (Johnson 248).  At the time, she was living with her husband and baby in the Persian Gulf expat town of Dhahran.  “I was pleased by the novel.  It seemed to express an intense, difficult period of my life in a way I’d hoped, and to evoke the New York I had left and missed so badly” (Johnson 256).

The book was published in 1958, and a few years later, her marriage falling apart, and two children to support, her father said he would buy the novel, produce the film, and, if Nora would write the screenplay with him, it would solve her current financial and hopefully, emotional crisis.  “The initial sale, when he was up and I was down, had something of an aspect of a grand geste, a generous act of salvation by a benefactor who had found a most tactful and ego-saving way of making a handout.  Henry Orient was, after all, not exactly hot.  It had been well received for what it was, a first novel written by a twenty two year old, but no movie company had shown any interest in it until Nunnally came along” (Johnson 296).  Nora’s screenplay stuck close to the book.  Her father said later, that being faithful to the source was no way to write a screenplay.  “I said, you can’t afford to do that.  The person for you to please is the audience.  They don’t care anything about the book, only what they’re seeing on the screen.  Maybe that’s why these authors never speak to me again” (Johnson 290). Revisiting the novel created new anxieties,  “It was depressing to be hung up on being thirteen….I wanted to be back at the time when the possibilities were infinite, before all the roads started to close down—which they had the minute I started smiling at that boy in dancing school—when I could still create my own life, write my own script”  (Johnson 291).  Nunnally wrote kooky Val, with her messy hair and mama’s mink coat, for Haley Mills, and it took almost a year for Mills to turn it down.  Patty Duke and Sue Lyon were also considered, until a search for unknowns was initiated.

One of the most contentious issues in the screenplay, was the “fattening up” of the part of Henry Orient, which was, of course, the way the picture was going to be sold.  Nora wanted it as it was in the book, in which he exists primarily in the girls’ imagination.  Before Peter Sellers was chosen, David Wayne, Robert Preston, Gig Young, Rex Harrison, Tony Randall and Dick Van Dyke were also considered.  For Nora, this was a major disappointment, for her character to be played with such broad comedy.  She had envisioned him differently.  “My Henry, what there was of him, had a little soul, a hint of tragedy, a suggestion of lonerism that would have endeared him to two bright waifs such as Val and Gilbert.”  Now she knew why writers of books her father adapted to the screen never spoke to him again.

Sellers is really only a supporting actor in the story, and although his screen time is limited, he does seem to enjoy his wobbly accent, shifting between the suave European seducer and a more down-to earth American cad “He has a dreadful Brooklynese accent, but in an attempt to appear cultured and charming, he hides it with a phony French accent” (Sikov 204). While waiting out the endless filming day, he spent the day in his trailer drinking vodka and tonics, and showing off his colorful wardrobe to a reporter.  Sellers was living a somewhat similar existence himself at the time, recently divorced he was enjoying being newly single, and newly movie famous. 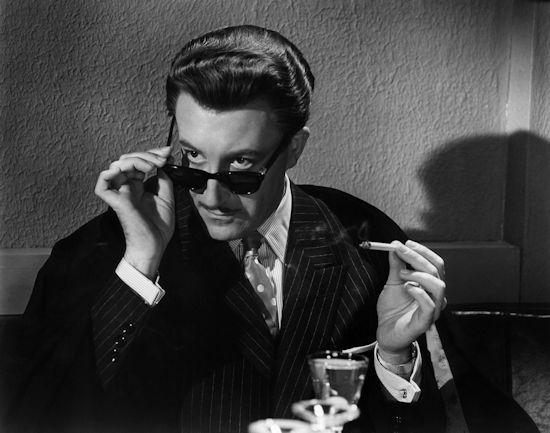 The two girls, Tippy Walker and Merrie Spaeth are what make this film so endearing.  Their very un-child-star-like performances vibrate with truth and naturalism.  Spaeth (Gil) was from Phiadelphia, where she attended Germantown Friends School, and had only played the role of Tweedledee in a school production of Alice in Wonderland, before she was hired at the age of 15.  Elizabeth Tipton “Tippy” Walker was from Rye, NY, and attended the Masters School in nearby Dobbs Ferry.  She was 17 and, as a passionate Beatles fan understood the nuance of being a fangirl.  She had recently done some modelling.  As students in posh private schools, they had lived the film’s privileged atmosphere. With some minor exceptions, this would be the only professional acting for both of them.

Director George Roy Hill, who later did Butch Cassidy and the Sundance Kid, and The Sting, both male buddy movies, had a real feeling for the film, which was shot around NYC, and at a studio on Long Island. Budgeted at $2 million, it was at the time the most expensive film ever shot in NYC (Sikov 204). One of the merciful changes he made was to axe the “whorehouse framing” which indicated Henry Orient ended up playing the piano in a whorehouse (this was Nunnally’s idea).  How could he not have seen that it would have completely violated the spirit of the film?

Nora said of Hill “he fitted the scene like a glove.  He lived in a brownstone on the East Side, he had daughters at Brearley, and he dressed like an Easterner:  floppy Shetland sweaters and gray flannel pants, a lanky off the campus look, and he looked so young that with a little stretching he could have been a Yale date of Val or Gil’s.  Tippy Walker (Val) and Merrie Spaeth (Gilbert, the Me character) were both Eastern prep school girls, and it wasn’t long before he had them in the palm of his hand” (Johnson 298).  Hill wanted to keep the set loose, nobody could talk to them about their performances, or tell them where to stand or stop a take.  “You say to a little girl, ‘I want you to pretend you’re mad, and really convince me you’re mad.  That’s all acting is, it’s make-believe and making the other person believe…then they became very loose, acting became a game in which they could convince somebody else they were sincere.  They didn’t pay any attention to anybody else on that set.  After every scene, they both turned to me like puppy dogs, and I’d say yes, or no or change it or whatever” (Johnson 298).

When the girls run around town leaping over fire hydrants they are shot in slow motion, a trick Hill stole from Leni Riefenstahl, the director of the Nazi propaganda film about the 1936 Berlin Olympics.  He wanted them to look like they were floating on air.

Tippy Walker seems to have surprised the director with her sensitive acting. As the film went on, it centered more on her character, and her solitary walk through snowy Central Park was shot long after the film had wrapped.  One reason for this was that according to her she and Hill “fell in love during the filming of ‘Henry Orient’ and remained so through most of my senior year in high school.” (New Yorker).  She was 16, and he was 44 married with children.  It seems to have been a mostly platonic relationship, but still, it’s icky.  The gossip about them helped torpedo her future acting career.

After the film, Merrie Spaeth got an MBA from Columbia and immediately went into Republican politics.  She was an assistant to the F.B.I. director, ran President Ronald Reagan’s communications office and worked on the George W. Bush campaign, most particularly on the Swift Boat Veterans for Truth campaign against John Kerry, which she says is her greatest regret.  She now has her own PR firm in Dallas.

Debutantes Spaeth and Walker are the center of the film, but there are polished Hollywood actors, as well.  Paula Prentiss plays a reluctant conquest of Orient’s and Angela Lansbury, Val’s mother, a more enthusiastic one.  Having just been Laurence Harvey’s dragon mother in The Manchurian Candidate, audiences would not have been surprised to see her as heartless.  As Carrie Beauchamp says on a You Tube clip filmed with the former child actresses at a TCM Festival screening, “You’ve got to hand it to Lansbury, she is not afraid to play a bitch.”  Astonishingly, Gil has two mothers!  Is there any film of any era before the current one that shows this particular relationship?  I’m astonished that this is not more of a Lesbian cinematic touchstone. 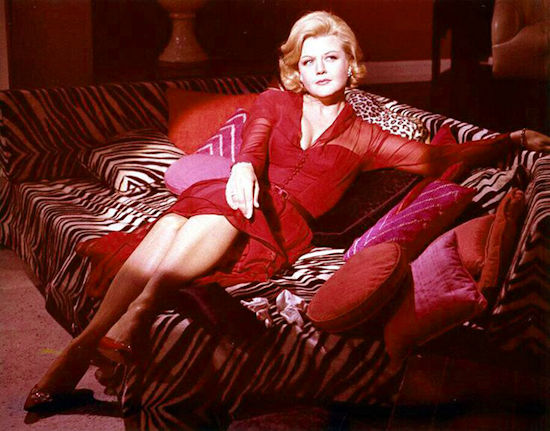 Angela Lansbury on the zebra stripe couch. A “Chinese” red was clearly a design theme for both costumes and sets..

The film did not make any money.  George Roy Hill thought it was the title.  But, over time, it has become somewhat of a cult favorite.  Nora saw it at MoMA in 1978, “where I was no longer jarred by the Sellers comedy, it had all somehow blended like old wine…during the scene when Val fantasized about Gilbert’s parents somehow getting together again, there was not a dry eye in the house, as there had not been, Merrie Spaeth told me, on the set the day it was filmed” (Johnson 301). 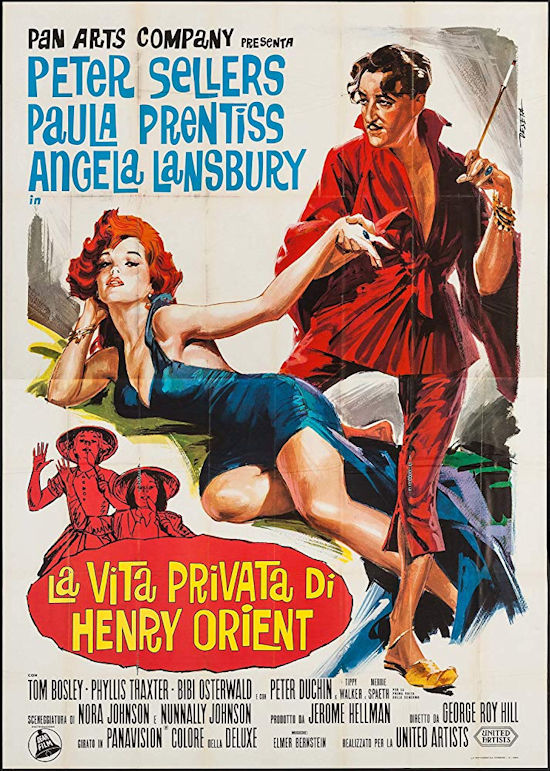