A brilliant political thriller, swift as a bullet, investigates the real-life assassination of a liberal politician, which triggered the overthrow of Greek democracy. The conclusion has been described as the first political music video. Z, restored for its 40th anniversary, won the Best Foreign Film Oscar, “Bold, jagged and modern as its one letter title” (Slate Magazine).

In the 1960s, Greece was a county in chaos. Still recovering from Nazi occupation, it was riven by internal strife from all sides of the political spectrum. Elections were scheduled for May 28, 1967, and the centrist party of George Papandreou, Sr., was expected to win. Perhaps, he would have formed a coalition with a leftist party. A group of right wing colonels took over the Greek government on April 21, 1967, taking over the Defense Ministry, the Parliament and arresting the Prime Minister. King Constantine’s palace was surrounded by tanks, and he swore in the Colonels as the new government. Eventually, he was forced to flee the country.

The Colonels’ government functioned for a while. But, they abolished most civil rights, creating much internal strife. They had the tacit support of the US, as Greece was an important Cold War ally. Vice President Spiro Agnew considered the military government to be the best one Greece could have (Flatley). Various mutinies weakened the hard line, and, eventually, democracy was restored in 1974.

Gregoris Lambrakis was a doctor who had worked for the Resistance during WW II, a physican, humanitarian, and Olympic athlete, as well as a leader in the Greek peace movement in the 1960s. In 1963, he addressed a Ban the Bomb rally, where he was attacked, exactly as you see in the film, and died 5 days later. His funeral was attended by half a million protesters. Christos Sartzetakis, (the character played by Trintignant) courageously began to investigate the murder. He was later imprisoned and tortured by the Colonels’ government, but later became a Supreme Court justice and President of Greece.

Lambrakis was assassinated in Thessaloniki, the home town of journalist and screenwriter Vasilis Vasilikos. He spent three years researching the case, and then wrote his documentary novel, also titled Z, in six months. Director Costa-Gavras’ brother was a friend of Vasilikos, and Costa-Gavras was reading the book when the Colonels’ coup occurred. The script follows the novel, and therefore actual events, quite closely.

“The military had just taken over my country,” said director Costa-Gavras, 76, about the recent rerelease of the film. “I wanted to make a statement of protest. But rather than sign a petition, or take to the streets yelling, ‘Down with the Colonels!,’ I decided I would protest with a movie. I’d already read Vasilikos’s book, so I thought, This is my way of saying no” (Fear).

The film was shot on location in Algiers, Algeria. It would have been impossible to film in Greece. The scenes of the attack on the square were shot at night in the main square of Algiers, creating a traffic nightmare. Both police and demonstrators were cast from the ranks of local students, but given carefully fitted uniforms and police arms, the director found the amateurs acting as police were a little too enthusiastic in their parts. Actors and non-actors shared the screen, in the neo-realistic tradition, although the motivation was budgetary, rather than philosophical. The doctor describing the injuries on the x-rays (which were located in the hospital’s archives, and fit the injuries described) was a real doctor, at least one lawyer was a real lawyer, and various crew members filled in for other parts. The surgeon who operates unsuccessfully and tells Irene Papas “he’s gone” in English is legendary French New Wave, and Z cinematographer, Raoul Coutard.

All the music is by Greek composer Mikis Theodorakis. He was born in 1925, and had been composing since childhood. He wrote many classical pieces, but achieved international fame with his score for Zorba the Greek. The Colonels banned his music, arrested him and confined him to a remote village; they later sent him to a concentration camp. International protests led to his release and exile in France. The music in Z was not composed specifically for the film. The composer was under house arrest, but one of the producers met secretly with him to gain permission to use his music. Theodorakis’ other notable scores include Topkapi, Costa-Gavras’ State of Seige and Sidney Lumet’s Serpico.

Director Costas-Gavras was born Konstantinos Gavras in Greece in 1933. His father was a member of the Communist dominated arm of the Greek Resistance, and after WW II served many prison terms. In contrast, his mother was a devout Catholic. Gavras was blacklisted by association, unable to attend University or hold a driver’s license and he emigrated to France, studying in the country’s top film school and reveling in the famous programs at the Cinematheque Francais. He worked as an assistant director for six years, assisting some of his cinematic idols, including René Clair and Jacques Demy. During that time befriended Yves Montand and his wife Simone Signoret, who were top stars in France. His first film as a director, The Sleeping Car Murders, starred them both. Z was his third film, at last, the kind of political thriller he dreamed of making. Many of his films dealt with political issues, including Missing (1982) about a father ( Jack Lemmon) searching for his son, along with his son’s wife (Sissy Spacek) during the Allende régime in Chile, and The Music Box (1989) in which Jessica Lange plays a lawyer defending her father against WW II war crimes. This master of the modern political thriller is still alive and making films, and came to New York City for the 40th anniversary revival premiere of Z.

Most of the actors agreed quickly to appear in the film for greatly discounted salaries. Yves Montand was worried about the one word title, afraid that the audience would expect a movie about Zorro. The letter is shorthand for “He Lives” in ancient Greek, a graffito that was spray painted around Athens after Lambrakis’ murder.

Yves Montand, who plays The Deputy, was born in Italy in 1921 as Ivo Livi, his Jewish family fled Mussolini and Montand grew up in Marseilles. He first gained fame as a music hall singer, and later as the protégé of Edith Piaf. He became an international film star when he played a truck driver hauling loads of nitroglycerin in Henri-Georges Clouzot The Wages of Fear. He married Simone Signoret, and went to Hollywood to star in Let’s Make Love opposite Marilyn Monroe. Montand continued to make a few films in Hollywood but mostly back in France; he died of a heart attack in 1991.

The Examining Magistrate is played by Jean-Louis Trintignant. He gained world wide fame as Brigitte Bardot’s husband in the racy And God Created Woman. After being drafted into the military, he returned to the screen and renewed his career in the famous romance, A Man and A Woman. For a period of time he acted in many smash hits in the great days of the international art film, Renais’ Last Year at Marienbad, Rohmer’s My Night at Maud’s, Bertolucci’s The Conformist and many others. He also appeared in the last films of two great directors: Truffaut’s Confidentially Yours and Kieslowski’s Red.

Irene Papas is probably the most well known Greek actress aside from Melina Mercouri. She has acted with Anthony Quinn seven times, memorably in Zorba the Greek. She was passionately opposed to the Colonels regime, attended Lambrakis’ funeral and was a great friend of Mikis Theodorakis. Her presence signals that the film is about Greece, even if it was filmed in Algeria with French actors.

“I never intended Z to be sheer entertainment” said the director to the NY Times in 1970. “I always meant the film as a political act. And the proof that it succeeds is that everyone recognizes the situation as the one in Greece, even though Greece is never once mentioned” (Flatley). Of course, it was a time of great political strife in this country too, many citizens felt that all the facts about the Viet Nam War were not being shared. Although some reviewers considered the film anti-American, it broke box office records for foreign films playing not just in the big cities but in small towns across America. A question was asked at the screening I could not answer, but I suspect that the prints that made Z such a big hit were dubbed, and not subtitled, as was the custom at the time. Z received 5 Oscar nominations, winning for Best Foreign Film and Best Editing.

Andrew O’Hehir on Salon.com interviewed the director and commented how Z combined elements of the Hollywood detective movie with the French New Wave “It was that simple. It was taking the good parts of American movies and the good parts of the new wave!” The style of the film influenced Hollywood thriller for years to come, with movies like The French Connection and The Conversation, “You know, we were all influenced by American cinema — all the European filmmakers of my generation. We try to do very personal movies, but we can’t get rid of American cinema. “ 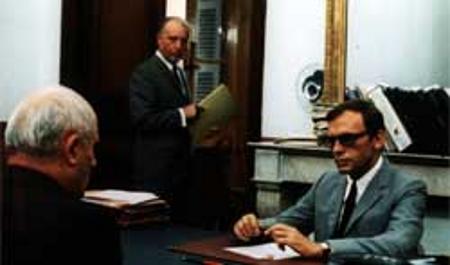 Sources include Rialto Pictures website “To the Letter” by David Fear in Time Out New York, http://www.timeout.com/film/newyork/features/show-feature/7036/to-the-letter/ “Movies are Passions and My Great Passion is Politics” by Guy Flatley New York Times January 11,1970, Truth vs. Power 40 Years Later by Andrew O’Hehir http://www.salon.com/ent/movies/btm/feature/2009/03/13/costa_gavras/?source=rss.