What do you do when fascists occupy your hometown?  A Norwegian fishing village has been ground under the Nazis’ heel for two long years.  Everyone has their own way of dealing with the pressure, some join the Resistance, others collaborate, and some just wish it all to go away.  When a shipment of arms is rumored to be arriving, the moment of reckoning arrives.  A propaganda film, yes, but somehow, with the excellent ensemble cast and our current state of the world, newly relevant.  Sheridan’s Karen, unusual for a war film, is an equal partner, as vital to the war effort as her male counterpart, Flynn’s Gunnar.

With the United States deeply involved in WW II, Resistance themed dramas were staple fare at all the Hollywood studios.  There were six films that dealt with the occupation of Norway, They Raid By Night, Commandos Strike at Dawn, Edge of Darkness, The Moon is Down, First Comes Courage, and Son of Lassie; more than any other country besides France.  Both the US and Norway hoped to remain neutral, but surprise attacks (in Norway’s case, in April 1940) forced them into the war.  Norway held out longer than many more fortified nations, and did not collaborate, the way official governments in countries like France did. 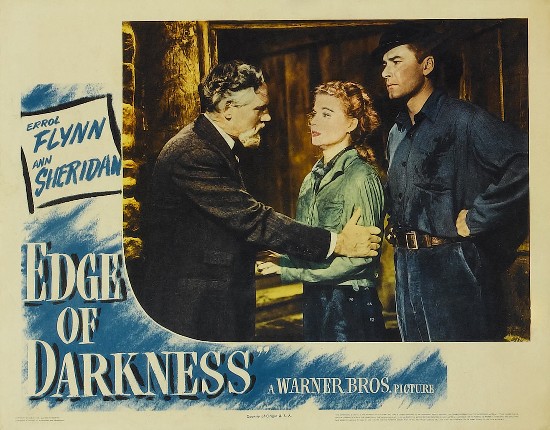 Norway had an interesting relationship with the American government at the time.  While the official Norwegian government was in exile in London, King Haakon’s daughter-in-law, the Crown Princess Martha, spent most of the war living in Washington DC with her three children.  The family spent considerable time as guests of the White House, and President Roosevelt and the Crown Princess enjoyed a close, and perhaps flirtatious relationship, which strengthened ties between nations.  This relationship was portrayed in the recent PBS series Atlantic Crossing.

Edge of Darkness was based on a novel by William Woods, and Warner Brothers paid him $30,000 for the film rights.  It was considerably changed for the screen.  The author, perhaps with an eye to being fair-minded, was a little more sympathetic to the Nazis than would be tolerated by either the Office of War Information or the public.  The Nazis would have to be thoroughly villainous. (Thomas, Behlmer & McCarty 128).  Director Lewis Milestone had been celebrated for his courageous All Quiet on the Western Front, one of the most significant anti-war films ever made. The studio cast two of its biggest stars, Errol Flynn and Ann Sheridan, in the hopes of capturing the cinema magic of Casablanca, made the year before.

The Office of War Information had specific guidelines for wartime films, and deeply appreciated that an entertainment film had a power that out and out propaganda did not.  OWI Director Elmer Davis said, “The easiest way to inject a propaganda idea into most people’s minds is to let it go in through the medium of an entertainment picture when they do not realize they are being propagandized” (Koppes and Black 64). Resistance dramas were important “for they explained the nature of the German enemy and also told film audiences that, though countries might be occupied, the people were still willing to fight and die for democracy” (ibid 280). Living under Occupation is a terrifying concept and gives a cold chill to everything that occurs in the film.

Milestone collaborated on the screenplay with Robert Rossen, who would become a significant director himself later.  They shared a Russian Jewish background and a close personal, as well as professional relationship. “Milestone and Rossen brought considerable moral complexity to the narrative, showing how various characters (especially the pastor and teacher) change their nonviolent views and how easy it is to slip into a posture of collaboration. Their script celebrates the power of ordinary people to resist and even overthrow oppression when united for mutual interest in community and comradeship” (Robinson 128)

“Rossen came up with an unusual idea for enlivening the dialogue. Since he didn’t know anything about Norway or how Norwegians spoke, he decided to use the Jewish conversational idiom that he knew very well. So, according to Milestone, he ‘wrote all the dialogue as if he were writing it for Jewish actors. That was his great contribution. I thought it was very logical. Nobody else knew about it; it was our secret. And since nobody else knew anything about Norwegians when the film came out, they ate it up.’ This was always a problem in Hollywood movies: how should English-speaking actors talk when cast as characters who should be speaking a foreign language?” (Robinson 128). 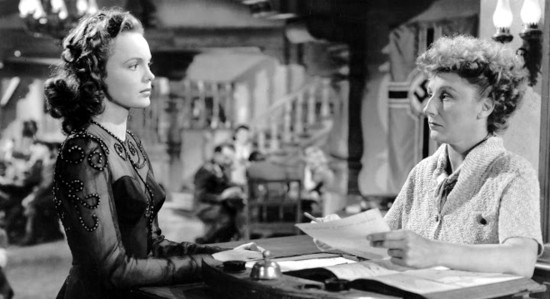 Nancy Coleman, who has been collaborating with a Nazi officer, confronts Judith Anderson

Franz Waxman’s score incorporates Norwegian themed motifs into his score.  He “repeatedly engages variations on the Norwegian national anthem ‘Ja, vi elsker dette landet’/‘Yes, We Love This Land’. The song, with text by Bjørnstjerne Bjørnson and music by Rikard Nordraak, was composed during Norway’s national romantic period of the mid-nineteenth century when the country was still under Swedish rule (1814–1905), after over four centuries under Danish domination. Both outlawed and co-opted by the Germans during the occupation, the national anthem remained a galvanizing symbol of fierce Norwegian independence and fighting spirit” (Lunde 307).

The film was shot on location on the Monterey Peninsula, and anyone who has ever been there can easily recognize the distinctive twisted cypress trees of the coast.  The Del Monte Forest, near the Monterey Presidio needed American military permission to film there, but usually the services were happy to contribute to the vital propaganda messages Hollywood was producing.   They also filmed in Carmel, and at two piers near Monterey’s Cannery row, and used a fleet of local fishing boats.

The production was challenging for the leading man, because Flynn was on trial for statutory rape, a charge from which he was acquitted during filming.  He was in court in the morning, and on set in the afternoon, which no doubt made it difficult to concentrate on his acting.  He was one of the most famous actors in Hollywood still not in uniform during WW II, since Flynn “had been turned down by every branch of the military because of a range of ailments, including a bad heart, recurrent malaria, chronic back pain, chronic tuberculosis and several venereal diseases” (Lunde 308).

This was not the first time “criminal charges had been made against the handsome and promiscuous star, who often chose inappropriate companions and found himself in compromising situations. Flynn was acquitted just before shooting concluded, but Jack Warner feared that the bad publicity would hurt at the box office” (Robinson 128).  Audiences were always quick to forgive Flynn for his transgressions, and Warner’s fears did not come to pass.  Before the #MeToo era, everyone seemed awfully quick to forgive.

Full disclosure, I love Errol Flynn, and I don’t really want to read about his life in too much detail.  Most of his hedonistic pursuits hurt himself more than anyone else, but not all.  As lovers of movies, what are we going to do about Annie Hall, The Gold Rush, Rosemary’s Baby, The Adventures of Robin Hood?  I’m so sorry/horrified to learn that so many creators had a fondness for victimizing underage girls.  I just don’t know how to process this criminal behavior.

Although the press liked to fabricate romances between Flynn and all his leading ladies, he prided himself on his platonic friendships with several female co-stars, including Sheridan.  Flynn never lacked for sex partners.  She remembered the film fondly.  “I enjoyed the picture very much.  It was timely and I think it made a lot of money.  And the people in it (Walter Houston, Ruth Gordon, Judith Anderson) were just wonderful.”  She said she enjoyed working with Flynn.  “Oh that was a wonderful time…Flynn was always strictly fun.  Never any trouble.  I adored him” (Hagen and Wagner 183). 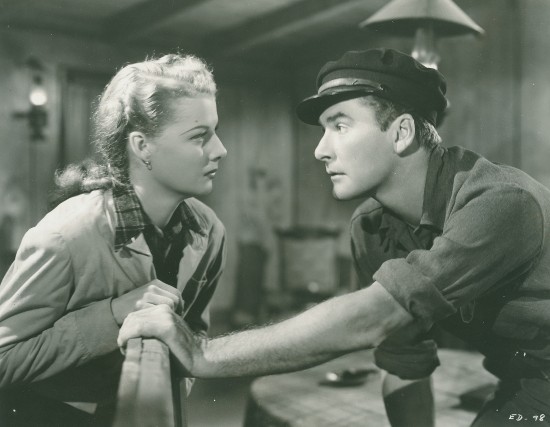 There are two reasons this film is included in Moviediva’s series.  The first is that I have become personally obsessed with films about fighting fascism at home.  This film was explicitly created to make you think about how you would behave if your town was conquered by fascists. The second is because of one scene between Flynn and Sheridan.  So many films have heroes who think a woman’s “virtue” reflects directly on him.  They agonize when they have feelings for bad girls, and harshly judge the good girls who turn out to be less than perfect.  Karen tells Gunner in no uncertain terms her body is none of his damn business.  How I wish there had been similar scenes in countless 20th century films—and not just during the Production Code era.

It was strongly reviewed at the time, with the Motion Picture Herald saying, “It is not a tea party. It is an icy shower turned loose on audiences in the hope of driving home what this war is all about” (Bubbeo 25). 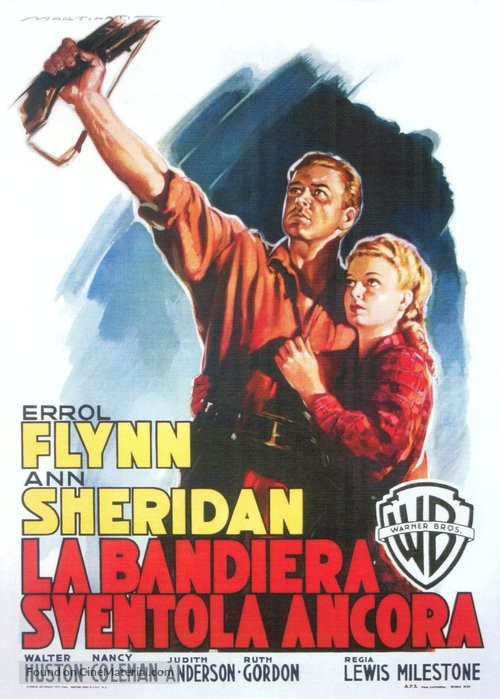 The Women of Warner Brothers: The Lives and Careers of 15 Leading Ladies, with Filmographies for Each by Daniel Bubbeo, “Look to Norway” The Nazi Occupation of Norway in Hollywood Wartime Cinema 1942-1945 by Arne Lunde in Journal of Scandinavian Cinema Volume 2 Number 3, Lewis Milestone: Life and Films by Harlow Robinson,  Errol Flynn: The Life and Career by Thomas McNulty, Killer Tomatoes: Fifteen Tough Film Dames by Ray Hagen and Laura Wagner, Hollywood Goes to War: How Politics, Profits and Propaganda Shaped World War II Movies by Clayton R. Koppes and Gregory D. Black, The Films of Errol Flynn by Tony Thomas, Rudy Behlmer and Clifford McCarty