There’s nothing quite like a cozy British mystery and an eccentric detective who is cleverer than he first appears.  This classic thriller layers the stressful routine of a rural hospital plagued by WW II German bombs with the hothouse passions of the staff. Unsettling deaths are occurring in what should be a safe haven.  Medical personnel are supposed to save lives, but has one gone rogue? “Life must go on, so it becomes something like a patriotic duty to keep up two distinct national traditions: the Agatha Christie–style detective novel and the zany comic mode represented by the incomparable Alastair Sim as Inspector Cockrill” (Geoffrey O’Brien).

Inspector Cockrill of the Kent County Police appeared in six comic detective novels penned by Christianna Brand.  Her husband was a surgeon, and he was assigned to a military hospital during the war. She observed an operation, and an anesthetist helpfully told her how to commit a murder. She modelled the character of Cockrill on her father-in-law.  She was nominated many times for the Edgar Allan Poe Award for crime writing and is considered to be one of the pioneers of the medical thriller.  She is also the author of Nanny McPhee.

The screenwriters slightly updated to setting of the mystery from a military hospital during the Blitz in 1941, to a civilian hospital during the doodlebug campaign in August 1944. This assault was one of Germany’s last gasps in the waning days of the war.  Drone planes were shot off in the vicinity of populated areas, they would crash and burn wherever they ran out of gas, hence the fear when the engine sounds stopped.  British air defense pretty quickly figured out a way to shoot them down and neutralize them, and the film is set in this brief window of fear before that happened.  Gilliat had worked on the script of Alfred Hitchcock’s The Lady Vanishes and borrowed from the master in his creation of a mix of genuine suspense amid a comic air.  Part of the pleasure of this film is the way the conventions of the whodunit are undermined. 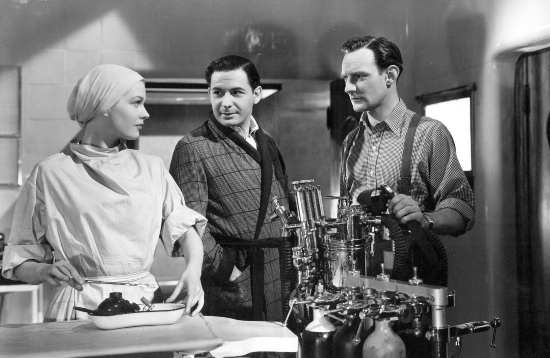 The film was a personal project of the director, Sidney Gilliat.  Although the book had been rejected by the studio’s story department, Gilliat was amused by the novel on a train journey and intrigued by the similarities between the sleep of anesthesia and The Big Sleep of the detective novel.  “No, what appealed to me was the anesthetics – the rhythmic ritual, from wheeling the patient out to putting him out and keeping him out (in this case, permanently), with all those crosscutting opportunities offered by flowmeters, hissing gas, cylinders, palpitating rubber bags, and all the other trappings, in the middle of the Blitz, too…The Blitz of the novel we changed into the 1944 V-1 attacks, as being by far the most dramatic of the various assaults on the old folks at home” (TCM). The source material was not comic, and Gilliat and his collaborator, Claud Gurney (who sadly died in an auto wreck during production) expertly balanced the sacred ground of the closed room Agatha Christie style mystery, and the droll British sense of humour (sic).

The action of the film takes place during wartime.  Constant bombing raids leave the hospital staff jumpy; “Nobody’s nerves are quite what they were.” The post-war audience viewing the film would have been intensely aware of the destruction wreaked by the just-ended war, and everyone’s agitated state of mind.  The setting plays both on the quintessential stiff-upper-lip-ishness of the English character, and the emotional repression that, once released, wreaks havoc.  British censors banned the film, at first, afraid that returning soldiers would be afraid they would be murdered on the operating table.

Director Sidney Gilliat said: “It is still my own favourite (Alastair) Sim role and of course gained enormously from his rather startlingly late entrance to the story (although we made him the first-person narrator from the beginning).”  In fact, Gilliat and his co-screenwriter changed the character quite a bit from the novel, “the part of Inspector Cockrill was pretty dull and characterless, and as the story itself was somewhat lightweight, we thought that Cockerill must be beefed up” (Simpson).  Gilliat researched the tensions of the wartime operating theatre and reproduced as closely as possible the conditions on site.  He employed a nurse to vet the actors’ procedures, and Trevor Howard watched real anesthesiologists at work.  There were two operating rooms, so the action could be shot from different angles.  Except for a couple of brief shots in the beginning, everything, the Tudor manor house that houses the hospital and all the surrounding countryside was shot in the studio.  In fact, this was the first film shot at Pinewood Studios after the war.

Although Alastair Sim is best remembered as one of the definitive Scrooges in Charles Dickens’ A Christmas Carol, others consider this is finest performance.  Since his inspector was a country investigator, he was allowed to progress much more slowly than his urban Scotland Yard counterpart would have been.  Sim came to acting late in life, he was 35 before he made his first film (he taught elocution in his hometown of Edinburgh, Scotland before) and was a character actor throughout his career.  In the early 1950s, he was one of Britan’s most popular stars, in films like The Belles of St. Trinian’s, in which he played a dual role as brother and sister (the latter in drag). 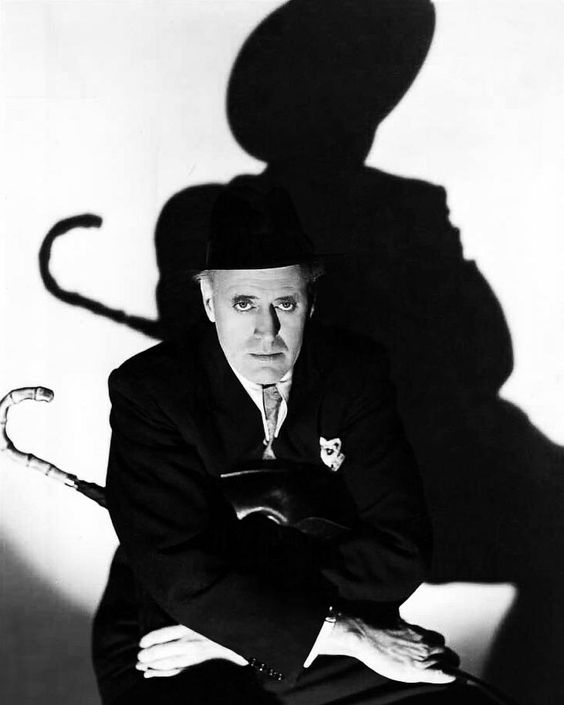 A publicity photo of Alastair Sim as the Inspector

One reviewer said, “It is possible not to care in the least who murdered the village postman in a hospital theatre after a V1 incident and to give up early the game of eliminating one by one the five or six nurses and doctors who are the suspects and yet to be immensely entertained by all that is said and done on the screen.  Mr. Alastair Sim is a detective with a rich relish for absurdity whether in himself or in other people, conducts the investigations and in his hands, detection becomes a delicious demonstration of the subtler acts of showmanship” (Simpson).

One of the special effects men recalled Sim’s good nature on the set after a pane of glass refused to break, as it was the wrong one.  The tech, who knew him fairly well shouted, “You bloody idiot!”  “Filming halted and everyone, including Sim fell about laughing, many actors would have been aloof, but Sim was one of the few who treated everyone like an equal, and didn’t have airs and graces.” (Simpson)

You may recognize Trevor Howard from one of his many famous roles, in The Third Man, Brief Encounter, as Captain Bligh in the Marlon Brando Mutiny on the Bounty, or as a British Officer in one of the many WW II films of the 1960s like Von Ryan’s Express.  Ironically, he had been turned down for military service, until being drafted into the Army Signal Corps.  He studied at the Royal Academy of Dramatic Art and began a career on stage.  In his third film, Brief Encounter, he became a star playing a married man who begins a restrained affair with a married woman he meets in a train station.

Sally Gray (Nurse Freddi) was a child star to transitioned to decorative roles on 1930s British films.  After a pair of roles in 1941, she had what was described as a nervous breakdown and retired from the screen.  Green for Danger signaled a comeback of sorts, but she only made a few more films before marrying a member of the House of Lords and retiring from the screen.  Her stepson (from a previous marriage of her husband’s) was a friend of John Lennon, who commemorated him with lines from “A Day in the Life” after he drove his car into a lamppost. (“He blew his mind out in a car; he didn’t notice that the lights had changed; a crowd of people stood and stared; they’d seen his face before; nobody was really sure if he was from the House of Lords…”) (IMDb).

Sister Bates played by Judy Campbell, 1960s It-girl Jane Birkin’s mother (of the famous, and famously expensive, Hermes Birkin Bag).  Charlotte Gainsbourg’s grandmother. Her family was theatrical, her mother an actress and her father a playwright.  Her plan was to desert the stage, and she studied theology and philosophy at Oxford for a time, and then returned to the family business.  She was credited as the originator of the famous wartime song “A Nightingale Sang in Berkeley Square.”  She gave up her career for a time when she married David Birkin, and this film signaled a return for her as well, she was primarily a stage and later television actress.  Watch Charlotte Gainsbourg discuss “Grandma’s movie” in this installment of Criterion Closet Picks.

I watched a lot of older British films during the Pandemic.  There is a lot of repressed emotion, but at the same time, they are much less Puritanical than American films of the same era.  The men stand around, relatively impassive, while their passions churn, and then erupt in a ludicrous fist fight.  It’s clear that the head surgeon has cut a swath through the nurses, having serial affairs with them, but he is not judged.  It’s shrugged off, no punishment needed.  It’s an interesting cinema culture contrast.

This was one of the few British films of the era to get an American release.  Pretty soon, retitled The Mad Killer, it became part of a double bill with Gang War, the new title for Carol Reed’s Odd Man Out, starring James Mason (Everson 308).  William K. Everson, the film historian, is a big fan of the film.  …”is witty, light-hearted and unpredictable, it’s moments of terror and even visual horror being all the more effective because of their lack of stereotyped build-up.”  He applauds the fact that it is a mystery that plays fair, all the clues are there, there is no too, too helpful suspect revealing themselves to be the perpetrator. 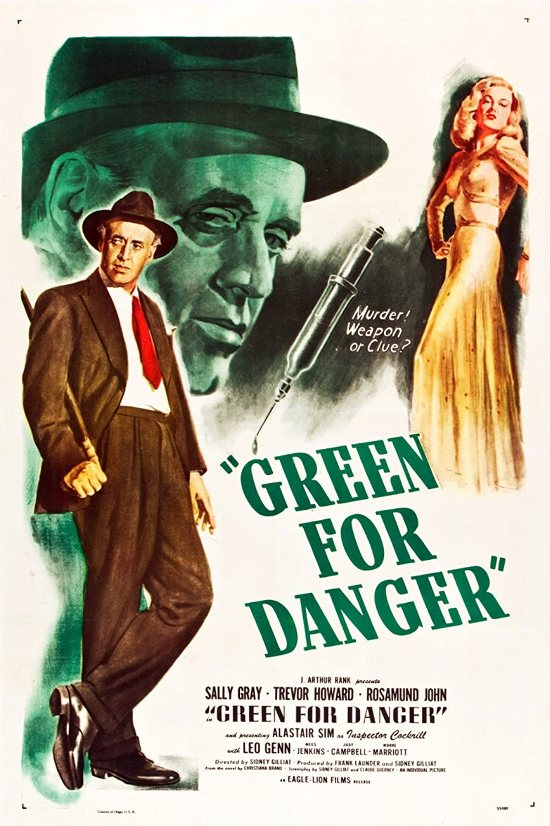