A prickly academic is strong-armed into test driving a bespoke android companion.  Tom, (Stevens, Downton Abbey’s dishy cousin Matthew) speaks German with an English accent, because the algorithm determined that would have maximum appeal for her.  Like Making Mr. Right, both human and non-human will find there is much to learn in this quirky not-quite rom com.  It’s a “charmingly low-key German-language romance — a movie whose bittersweet lessons on life and love feel genuinely, organically earned, even if one half of the couple it centers on was forged from ones and zeroes” (Leah Greenblatt Entertainment Weekly)

We all live with AI in our lives.  We set up our home surveillance devices, our Ring doorbells, our Nest thermostats, our OK Googles, our Alexas our Siris, and we live in harmony with them.  Humanoid examples—for now–are fewer, and many of them are menacing figures.  Earlier generations of Sci Fi imagined robots looking like Robby the Robot, C3PO or maybe Arnold in The Terminator.  Modern AI infiltrates every aspect of our lives.  In And Just Like That, Carrie Bradshaw (Sarah Jessica Parker) moves into a high-tech apartment and is plagued by a beeping she cannot find and silence.  All of us have chased an automated sound around our homes looking for the source (usually in the middle of the night, in my experience).  And, by the way, if you did watch that show, on which my daughter is head tailor, for that scene she trimmed SJ’s huge straw picture hat in purple silk, on set, after the actress nixed the yellow trim which with the hat arrived.  That is Moviediva Jr.’s glamourous life.

Softer tech does have a few examples.  Joachin Phoenix falls in love with his automated assistant in Her.  There is the melancholy little boy in Steven Spielberg’s AI.  There’s a lovely and poignant film based on a play called Marjorie Prime.  In it, a caring adult child buys a hologram for her failing mother, one that looks like her father when he did as a young man, for her to interact with it/him.  When my mother had been widowed after more than 60 years of marriage, I asked her if she would entertain such a creation.  She thought for a long time and then said, “I wouldn’t say no.”

We have become comfortable with the inclusion of different kinds of AI in our lives.  A friend of mine worked, pre-internet, for some hush hush national security agency in D.C.  She told me many years later that they brainstormed constantly on how to access peoples’ private information.  After Facebook, that was no longer an issue.  She said the one thing they never thought of was:  just ask people!  They give social media apps all their private information painlessly.  More than they ever thought possible.

In Making Mr. Right, a scientist (John Malkovich) makes an android in his own image, that of a not very well-socialized nerdboy.  It takes an advertising image executive, played by Ann Magnusson, to teach him how to be more human, to look in someone’s eyes when they are talking, to appear to be listening.  I showed that film in my last series, and this is a fascinating companion piece examining what we wish for in our android BFs. One topic that is not addressed is that the androids don’t age.  Would you turn yours in every so often to get a more mature version or would having a young appearing android companion make you feel younger in return.

Past writers twinned Making Mr. Right with Young Frankenstein, especially as far as the monster’s education, especially sexual education is concerned.  Interestingly, Making Mr. Right is a Frankenstein story without a creation scene, usually an important centerpiece. When Frankie meets Ulysses, he is already “alive.”  Another writer compares Ulysses to another 80s android, Star Trek:  The Next Generation’s Data.

Director Maria Schrader wrote the film with her partner.  She is also an actress, probably known best for Deutschland 83, and the director of the mini-series Unorthodox.  Her next film releases in the fall, about #metoo and the Harvey Weinstein scandal.  Dan Stevens, who plays the android Tom, has been speaking German since he was a boy, both in school, and because his family vacationed with family friends from Germany.  In an interview he speaks about the idea of satirizing the romantic leading man, as Tom calculates what kind of a man he thinks he is supposed to be.  The Philadelphia Story was a touchstone, he and writer-director Maria Schraeder imagined Tom watching Cary Grant to learn body language and how to exercise his charm most effectively.  As an actor, Stevens attempted to show “how much human and how much robot appears in any given moment.” (Bleeker Street).

Schraeder felt casting Stevens was like winning the lottery.  “We wanted so much to have a beautiful man capable of speaking very complicated German, but not being German, to bring a taste of strangeness to the character” (Indiewire).  Her crew was 2/3 female, which is, I don’t have to tell you, is unusual and brings a strong female pov.

The film is set in the future, but perhaps only three weeks, or three months into the future; the time is demonstrably our own.  Updating what Dan Stevens calls, “road testing the android boyfriend experience” takes the fact that we will someday soon have AI companions as real.  I’m Your Man shows a Berlin empty of people because of COVID, which almost gives it a kind of post-apocalyptic setting.  Schrader wanted to explore “what makes us human, not how does an android work.”  Tom doesn’t know the difference between having the feeling and performing the feeling.  The film, which was made shortly after the initial pandemic lockdowns, taps into the loneliness that is an integral part of our COVID experience.

I’m Your Man won numerous German cinema awards and was the official submission for the foreign language film Academy Award.  It was a global hit, released in 80 countries.

In a romantic comedy, you have to want the couple to come together.  In I’m Your Man, this yearning for completion is complicated because one half of the couple is not human.  Is that a problem? 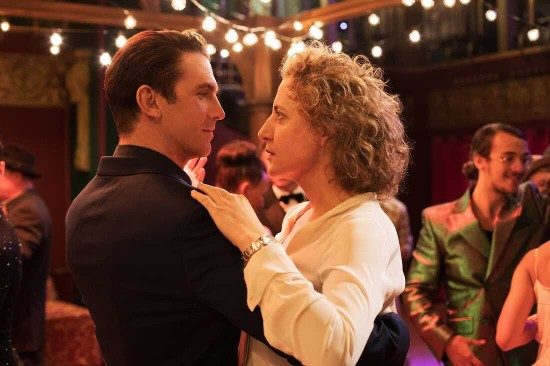