Racial profiling and circumstantial evidence roil a boiling jury room full of stellar character actors. Is it an open and shut case or a railroad job? Reminders of the innocence protection afforded by the Constitution have never more timely. Lumet’s first feature was bankrolled by screenwriter Reginald Rose and star Fonda. “It is a masterpiece of stylized realism… lean and mean”– Roger Ebert.

If we learned nothing else from Nancy Buirski’s documentary portrait, By Sidney Lumet, last week, is that Lumet spent his entire career exploring how personal responsibility and integrity can change society as a whole for the better.

This arose from his background as a New Yorker, a resident of the Jewish neighborhoods of the Lower East Side. He was born in 1924, his father was an actor in the Yiddish theater. This was the family business; as a child, young Sidney acted in both Yiddish-language theater and radio, then English language plays with Jewish themes, typecast as a streetwise, tough Jewish kid. He attended the Professional Children’s School in New York and then Columbia University, but he quit his freshman year to join the army during WW II. After the war, he returned to acting, but he also taught acting, and that led to being hired as a director for that pesky offshoot of radio, television.

The 1950s was considered the Golden Age of Television (or, perhaps, the first golden age). Televisions were expensive in the early 1950s and only the well-off and well-educated had one. Thoughtful dramas dominated the airwaves, and directors who could work quickly with minimal sets and be ready to go live after brief rehearsals were valued. Directors had to know how to get an actor to deliver a performance that would register strongly on a 14” black and white screen and “bring the viewers back for another act after a commercial break for Kraft cheese or Philco television sets” (Blake 46). Lumet had the reputation of getting the job done during seven years of solid productions.

Italian neo-realism influenced early television dramas in New York, much the way it influenced Satyajit Ray’s Pather Panchali in Calcutta. After the war, there was a hunger—not for escapism—but a reflection of real life.

Twelve Angry Men was written by another New Yorker, Reginald Rose, and directed by Franklin Schaffner for the CBS anthology show Studio One. Twenty minutes had been cut for tv, but the film restored the edited scenes. Henry Fonda wanted to play Juror #8, and, impressed with Lumet’s work as a teacher, asked him to direct. Fonda’s participation insured big studio distribution for what would be Lumet’s first film.

Fonda liked films and plays with important themes. He wanted the cast to rehearse like a theater production, before any filming began. Fonda was under extra pressure as producer, as well as actor. Working on a low budget film increased his stress. Outside the window of the jury room, there was a painted backdrop, rather than a more expensive photo enlargement. Fonda lost his temper when he saw it, telling Lumet, “When I worked with Hitchcock, the backings were so real you’d walk into them because you thought they were three dimensional” (Fonda 249). He was assured that they would look right on camera.

“We started shooting the following morning in Manhattan. The first shot was a very complicated one, over the blades of the fan using a crane. The lighting turned out to be a phenomenal problem, We waited from 8:30 to 4:00 in the afternoon” Fonda went reluctantly to the rushes the next day. He hated seeing himself on screen. Sometimes he never even saw his finished films. “Hank steeled himself, walked into the projection room and sat down behind me. He watched for a while, and then he put his hand on the back of my neck and squeezed so hard I thought my eyes would pop out. He leaned forward and said quietly, ‘Sidney, it’s magnificent.’ Then he dashed out and never came to the rushes again” (Fonda 249).

The film was shot in 17 days, with a budget of $340,000, coming in $1,000 under budget. United Artists enthusiastically booked it into large houses over the Easter holiday, but the film flopped at the box office. It won first prize at the Berlin Film Festival, and then prizes in other international film festivals. If American box office had been a disappointment, the global acclaim would cement its reputation as a classic.

Called “The Citizen Kane of jury films” (Levi 74) Twelve Angry Men does not include any footage of the crime or the trial (just the instructions to the jury). It is set entirely in a constricted summertime jury room, populated by a white male cast of sweaty character actors. The defendant is likely Puerto Rican, the primary Latino minority in 1950s New York (as we know from West Side Story) but is ambiguous in appearance; he could be Italian, the tough Jewish kid that Lumet used to play on stage, or even, in a more modern context, Middle Eastern. Author Rose has included an economic cross section of mid-century New York, if no female or minority jurors. These days, revivals are apt to be titled Twelve Angry Jurors, or Twelve Angry Women. The point is that the accused is not “us” but “them” a topical theme in this strident 2016 election season. The heat and the claustrophobia of the jury room makes tensions flare. “Exposing the unfocussed irrationality of bigotry will mark Lumet’s work for decades” (Blake 56).

The film unfolds in real time. “Lumet’s legendary skill with actors is evident even in this early film, as all the jurors—even those with smaller speaking parts—emerge as recognizable human beings, with whose conflicts and weaknesses we can identify” (Cunningham 110). We are persuaded that even the less educated members of the jury can eventually be persuaded to drop their prejudices. The point of a jury trial isn’t just to convict the guilty, but to protect the innocent.

Henry Fonda’s screen image as an unassailable pillar of integrity, his calm demeanor revealing his determination to insure fairness under duress makes him the central figure of the drama. As an actor who has played Abraham Lincoln, he brings trust to his role. His power as an ordinary citizen allows his fellow jurors to be their best selves. Although this is often described as a photographed play (which it is) Lumet does take advantage of both the movie screen and the available photographic technology, with long takes, and a moving camera. Any of you who have revisited a DVD of a favorite old tv show on your big screen tv knows, old school tv was mostly close-ups of a bunch of giant heads, since that is what was easy to see on the tiny screens of yesteryear. That is not what you see here, as the dynamic between individuals is accentuated.

The cinematographer Boris Kaufman, a frequent collaborator of Lumet’s in this era, talked about how the limitations of the set would “make the sense of confinement an integral part of the visual mood. As the film’s tensions mount, Lumet changes lenses to emphasize the effect of crowding at the table over which the jurors argue. The lighting gradually grows darker as the thunderstorm approaches, and as issues and men reach a breaking point” (Cunningham 119).

As the jurors enter the jury room, little bits of business delineate their characters, which will be revealed in greater detail as the film progresses. To say it’s “just” a filmed stage play is to ignore the skill at which Lumet uses his circumstances. He could have had a glass topped table, which would allow for some trickier camera shots. But, it was too showboaty for him. “Just you and the fullness of your behavior” (Cunningham 119). “But although Lumet is an “old-fashioned” liberal committed to looking at themes of personal responsibility and to looking at each situation on its own terms, he refuses to give his audience what some liberals did in the 1950s; the comforting illusion that there are relatively easy answers to complex questions” (Cunningham 121). 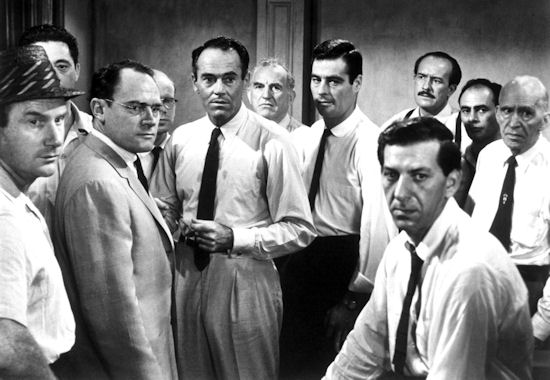