42nd Street initiated a new cycle of screen musicals, after the fad for “all talking all singing all dancing” was thought to have run its course.  The plot is a cliché, and honestly, was a bit cobwebby even in 1933.  But, this film holds a unique place in movie history, “one of a handful of Hollywood movies which not only reflect, but are American social history—films that might include Casablanca, the original Invasion of the Body Snatchers, Bonnie and Clyde, Rocky and Ghostbusters” (Hoberman 68). 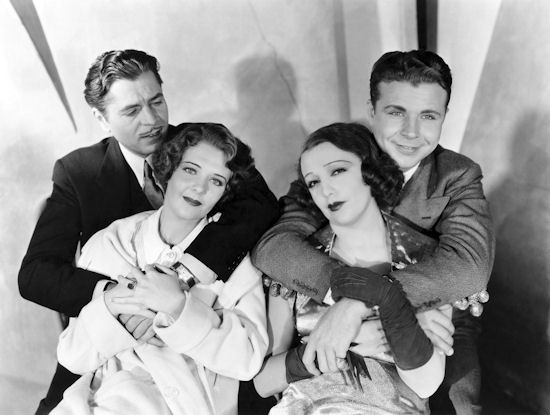 Franklin D. Roosevelt had just been elected President, and the country dared to dream that the worst of the Depression was past.  42nd Street “became the symbol of national renewal, and just as with the one film that had epitomized the coming of sound (The Jazz Singer) it came from Warner Brothers” (Barrios 371).

Adapted from a hard-boiled novel by an ex-vaudevillian which the Times thought “excessively vulgar” and “gossipy” and “not a book to give to a maiden aunt” Warners paid $6000 for the screen rights.  The writers were inspired by the book’s wise-cracking dialogue, some of which (toned down) even made it to the screen.  In the novel, the director is gay, and involved with the character played Dick Powell.  Star Dorothy Brock is “an over-the-hill nymphomaniac” and sweet chorine Peggy Sawyer “turns into the most formidable ogre this side of Lady Macbeth” (Barrios 373). The writers saw it as a chance to make a sassy Warners style Grand Hotel with a lot of stars and subplots. Producer Darryl F. Zanuck was so worried about the front office’s reaction to a musical that he shot two films simultaneously, one a back stage drama, and one a musical, which he would combine into one film at the last minute.  Still the musical numbers could be entirely edited out if it seemed prudent, as was common for songs featuring African American performers, which could be edited out of prints destined for the American South. 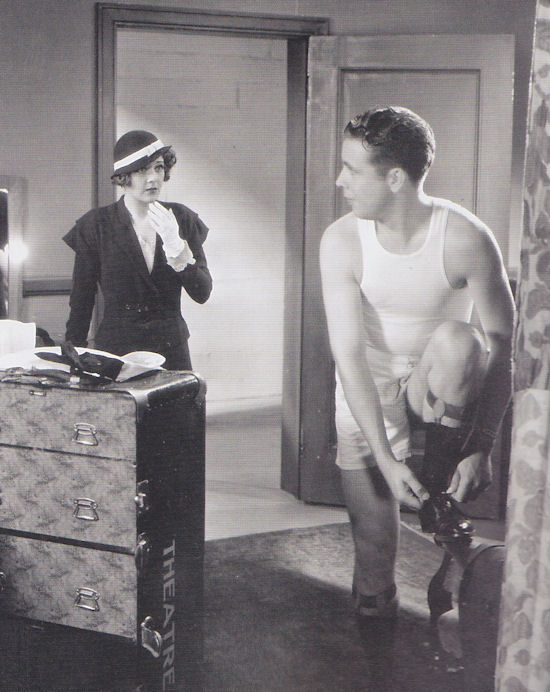 In Pre-Code movies, even the boys had to strip down to their skivvies from time to time.

The cast is a combination of former silent stars, and youngsters about to make it big.  Warner Baxter (Julian Marsh) had already been in films for 20 years, he played Jay Gatsby in the sadly lost 1920s version of Fitgerald’s novel.  The audience at the North Carolina Museum of Art loved his terrible “no pressure” pep talk, “you’re going out there a youngster, but you’ve GOT to come back a star.” 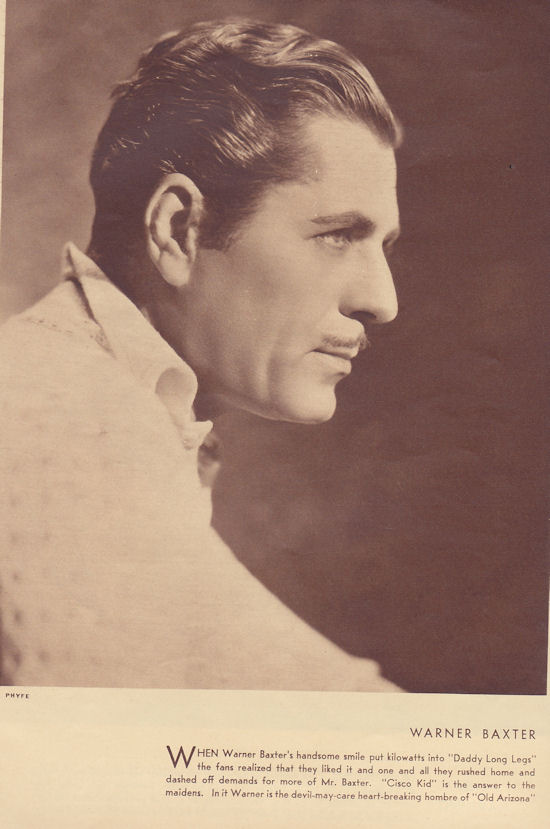 Bebe Daniels (Dorothy Brock) had a long career, starting as a foil for Harold Lloyd and progressing to glamorous roles in Cecil B. DeMille’s sexy comedies like The Affairs of Anatol, in which she played a femme fatale named Satan Synne.

Fashion was an important tie in, and stars modelled clothes for fashion features, like Daniels in coq feathers, here. 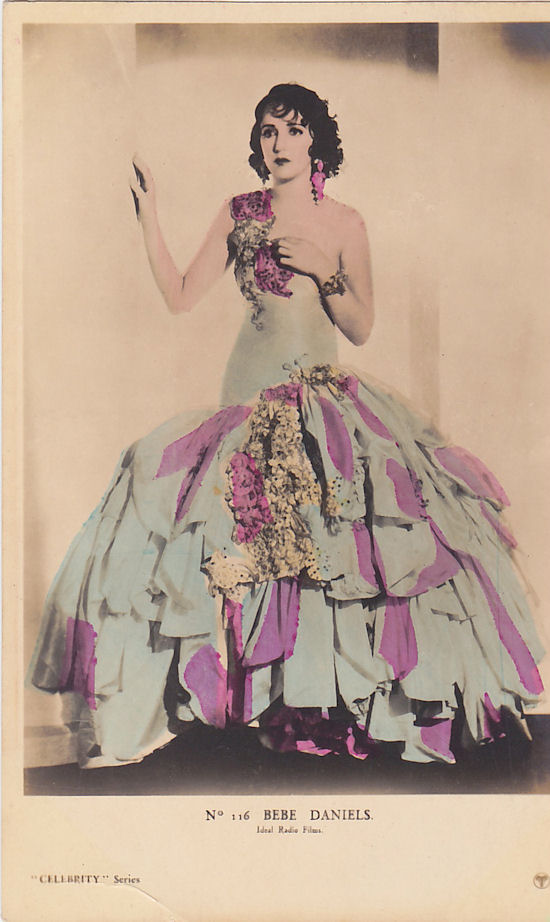 George Brent, who plays Dorothy’s vaudeville partner, was often a dud on screen, but his private life was rather interesting; acting as a teen in Ireland’s favorite Abbey Players, he was a rebel courier and supposedly left Ireland as a fugitive. 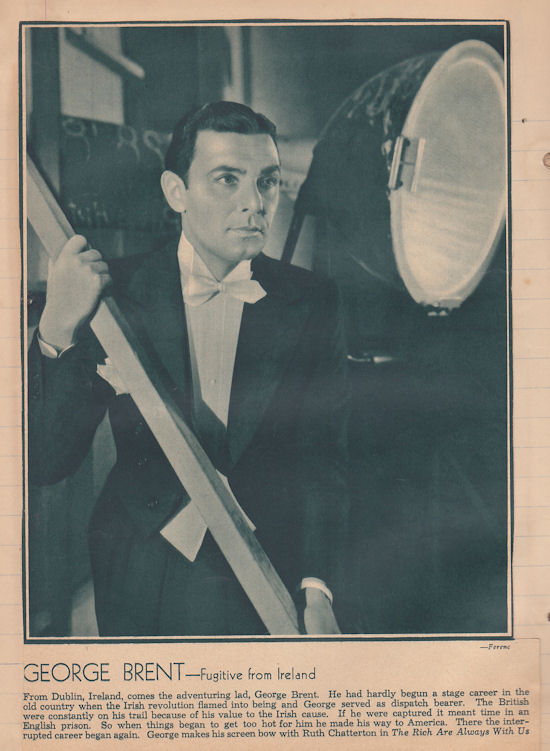 However, since this tale of a fugitive is recounted in this fan magazine page, I doubt it! But, Wikipedia confirms.

Dick Powell had been a radio crooner, and was on his way to being a big musical star at Warner Brothers. 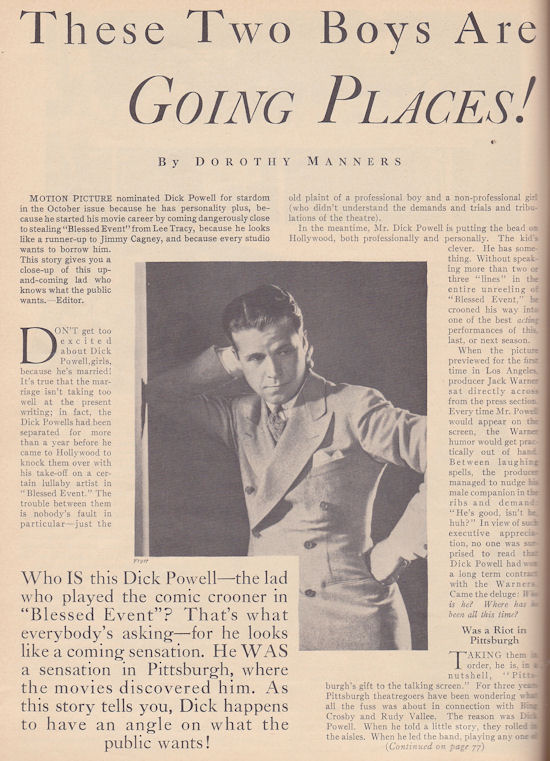 The other star of tomorrow was William Gargan

Ruby Keeler may play a wide eyed naif, in real life, she was anything but.  The 23 year old New Yorker had been dancing in speakeasies since her early teens, “protected” by a gangster, Johnny “Irish” Costello.  Wooed by Broadway star Al Jolson, she married him at 19 (he was 43) and came to Hollywood with him, although he did not want her in the movies.  But, he negotiated a $10,000 salary for her for this film (and chorus roles for two of her sisters).  Reviews took note of Keeler’s smash success just as her husband’s film, Hallelujah, I’m a Bum was tanking. 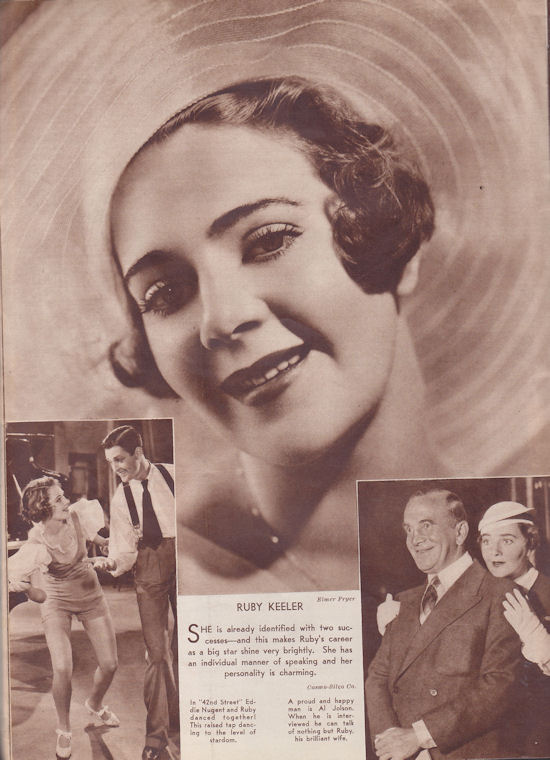 One of the chorus girls is Ginger Rogers.  Next year, she would star opposite Fred Astaire in Flying Down to Rio, more about her next week.  To modern eyes, she seems a much more likely star of “Pretty Lady” but of course, the on screen casting director did not have a crystal ball. 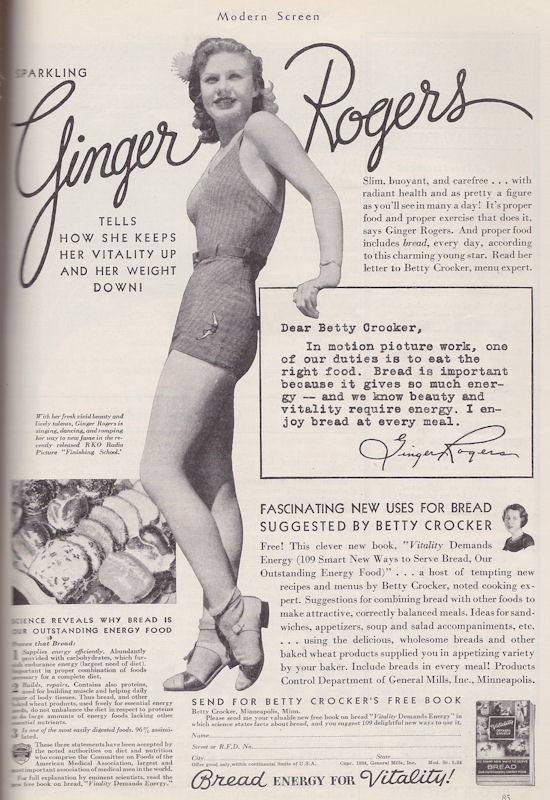 Ginger was not a big star, yet. Eat more bread, Ginger!

A main appeal of the film today is Busby Berkeley’s incredible dance numbers. While Berkeley’s dance extravaganzas of the early 1930s would seem to be impossible anywhere but on the movie screen, they in fact did have origins dating back to 19th century stage spectacles. They evolved from the revues that had been popular on Broadway in the 1910s and 1920s. Revues were not a series of completely unrelated acts, like in a vaudeville show, but a series of musical and comedy specialties structured around a loosely defining theme. This theme, in many cases, may only have been the decorative display of the female body. There were intimations of his movie style in chorus numbers Berkeley did on stage, where showgirls became factory assembly lines or airplanes. There were no overhead views, but he used stairs and platforms to alter the space on stage, and in Earl Carroll Vanities of 1928 he used an optical device called the “Vanities Votaphonevitotone” to project enlargements of one chorus girl’s face at a time on a screen.  At Goldwyn, he had giant turntables in one of his Eddie Cantor movies, but they didn’t revolve.  He was told if he wanted revolving turntables, he would have to go to another studio, and he decamped to Warners. 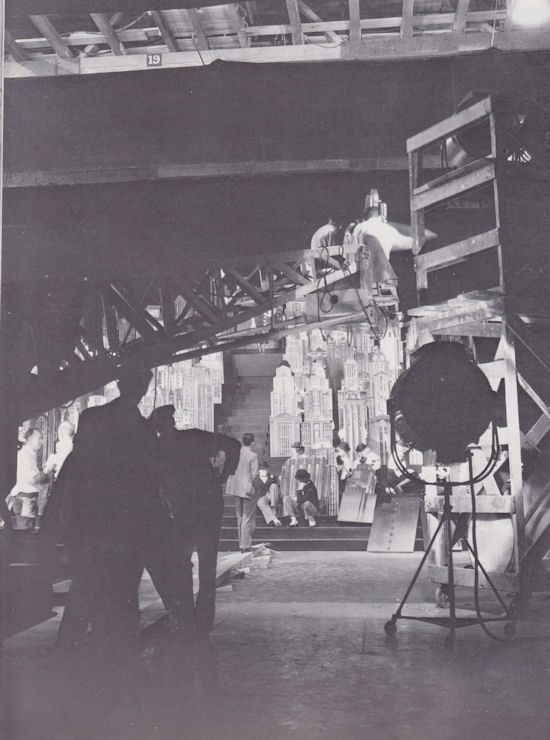 The set for the bit 42nd Street number

Berkeley learned about choreography from closely observing the dancers, he had no dance training. In fact, according to one writer, since he did not dance himself, he did not choreograph the steps.  “He dreamed up and staged dance numbers and left the choreography to others.  Berkeley was of course an extremely innovative director.  He was proud of planning each shot for a single camera, with long takes and continuity between shots, at a time when musicals were filmed with multiple camera and incessant cutaways to different angles.  “Here perfectly reproduced is the robot love goddess of Metropolis.  No wonder Zanuck was impressed…(it) is the Dream Factory’s Dream” (Hoberman 59). 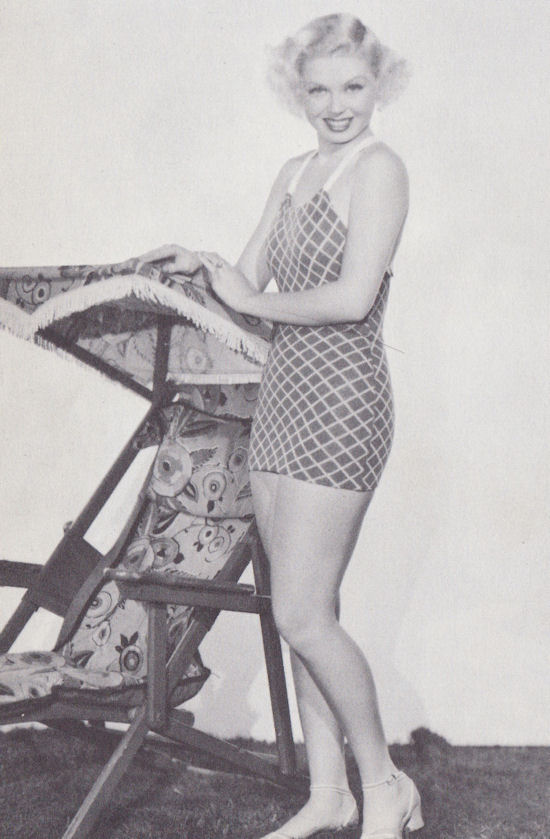 Toby Wing was one of Berkeley’s favorite chorus girls. Dick Powell sings “I’m Young and Healthy” to her.

He showed a gaggle of executives what his plans were for “Young and Healthy” “I staged this with three revolving platforms, and I explained to Zanuck that I couldn’t show him exactly what he would see on the screen because I planned to shoot in cuts.  I outlined the continuity for him and showed him my camera placements, then had Dick Powell and the boys and girls go through the numbers in sections.  Zanuck and the others seemed very pleased with the performance and the staging I had planned; he turned to the executives who were with him and said, ‘Give Berkeley whatever he wants in the way of sets, props, costumes.  Anyhthing, he wants, he can have’” (Thomas 51). 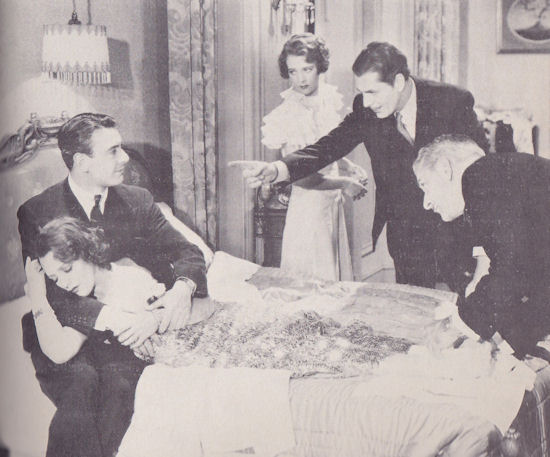 Oh, my ankle! When Daniels falls, she rips a big hole in the side of her sequinned dress, and you can see the lining.

He was incredibly inventive in thinking up new ‘homogenous quadrangle equations’ as he called his geometrical schema, on which to base his spectacular sequences.  As he put it, ‘It was hard to think up an original number because I never brought someone out from the side of the wings and then they went into their dance. Never in my life.  That’s the old way.’ (Wollen 17) Watch for songwriters Al Dubin and Harry Warren playing themselves, and for George E. Stone, as Andy. Family lore has it that he is some sort of a cousin or other. 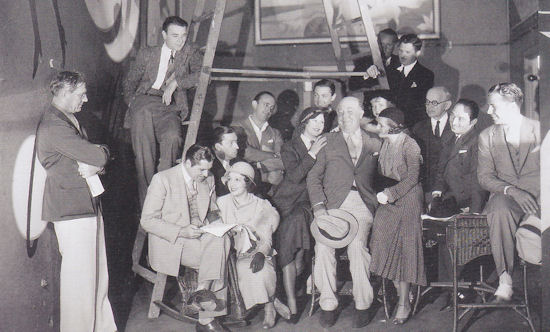 Director Lloyd Bacon (on the left) and his cast

Berkeley’s giddy, girly kaleidoscopes in his great early Warner Brothers period, from 42nd Street in 1933 to The Gold Diggers of 1935 had an art deco geometry that other dance numbers simply didn’t. There was a tension between innocence and vulgarity, a fragmenting of the female body that only he could imagine on the screen. Berkeley had a unique advantage at Warner Brothers, in that he was not required to showcase a particular musical star, but worked with an ensemble, since it was the chorus that seemed particularly to inspire him. He loved shiny black floors and dancers in white, he loved girls’ faces and other parts of their bodies, too. These numbers were rehearsed and rehearsed until they were perfect.

Berkeley was an alcoholic, which became, after 1935, more of a handicap, especially as he dealt with the ramifications of a drunken driving accident in which he killed three people.  He was hospitalized after a suicide attempt in the 1940s.  He was forgotten until his films began to be rediscovered as “camp” in the 1960s.  An off-off Broadway show at a Greenwich Village coffeehouse, Dames at Sea, starred 17 year old Bernadette Peters as a Ruby Keelerish ingénue in a warm hearted Busby Berkeley parody. It eventually moved uptown, and then on to many community theater stages.  Berkeley and Keeler began to capitalize on their rediscovery, culminating in a revival of the musical No, No, Nanette directed by Berkeley and starring Keeler in 1971.  It was “reported that (producer) Rigby would be ‘advertising the show in the underground papers because, as he told Berkeley, ‘you make head movies. The kids love to go to your films and get high on marijuana’” (Hoberman 74). In the article below, the interviewer is afraid that younger audiences came to laugh at Berkeley, and perhaps, some did, but much of the adulation was genuine. Berkeley died in 1976, not a dusty has-been, but knowing he had found cinematic immortality.

Sources include: 42nd Street by J. Hoberman, Singin’ in the Rain by Peter Wollen, A Song in the Dark by Richard Barrios, The Busby Berkeley Book by Tony Thomas and Jim Terry with Busby Berkeley.

Photos:  Ruby Keeler from the September 1933 Modern Screen, Warner Baxter in the December 1931 Silver Screen, Dick Powell and Bebe Daniels fashion photo from the December 1932 Motion Picture, Ginger Rogers loves bread from the June 1934 Silver Screen, Bebe Daniels from Rio Rita, postcard from Moviediva’s collection, 42nd Street set from Thomas, Guy Kibbee and cast, plus Powell in his garters from Hollywood Musicals by Ken Bloom, Toby Wing from All Talking, All Singing, All Dancing by John Springer, Bebe Daniels in bed in the August September 1971 issue of Films in Review, newspaper clipping of Busby Berkeley from Moviediva’s collection.