A demented conquistador searching for the golden city of El Dorado leads a doomed expedition through the Amazonian jungle. Herzog seeks arduous location shoots, here in Peru, enabling his manic visions. “Is Aguirre mad? Was Kinski? Was Herzog? Yes, yes and yes—and this is not to be missed.” (Peter Bradshaw).

In the 1970s, no cinema was more exciting than the New Wave of German filmmakers led by Werner Herzog, Rainer Werner Fassbinder and Wim Wenders. Each new release created ripples of discussion and argument amongst film lovers, as these revolutionaries created their art. One of the high points of the decade was this demented historical journey directed by Herzog and starring his muse, Klaus Kinski. “Werner Herzog sees himself—and would have others see him—as a mystic, a visionary, a dreamer of new dreams, a teller of new truths and above all a seeker of new images.” (Franklin).

Herzog grew up on a farm in Bavaria, wrote his first script at 15 and was already trying to produce his first film 2 years later. He began traveling to exotic and sometimes dangerous locales before he had finished school, “fascinated by the idea that our civilization is like a thin layer of ice upon a deep ocean of chaos and darkness.” (Cronin). He financed his early short films by working the night shift as a welder in a steel factory in Munich. Like the early film pioneers who invented the medium, Herzog believes that life experience is more valuable than a film school education. “Walk on foot, learn languages, learn a craft or a trade that has nothing to do with the cinema. Film making must have the experience of life at its foundation.” A Fulbright scholarship took him to Pittsburgh, a location he chose because of its working class environment, but after three days returned the scholarship which was his only source of income. Drifting to Mexico, he learned to speak Spanish and love Latin America. He earned money in part by exploiting the porous border between Texas and Mexico to smuggle televisions. By the late 1960s, he was back in Germany, where his short films were being shown in festivals, and he won a screenwriting prize.

He made several idiosyncratic features that blended fiction and non-fiction, which won small audiences and film festival attention. Aguirre was conceived as a more “commercial” film, containing more of the “action” that audiences demand. Although there was a real Aguirre, documentation is scarce, and the facts were merely a departure point for Herzog’s own imagination. The narration is fiction, even though a monk of the same name as the one in the film did exist and wrote a diary of a similar expedition. Herzog was fascinated by the fact that the conquistadors had such a clear sense of purpose in searching for a nonexistent locale. “It is like a Greek tragedy; at the end it is so obvious that he has brought these horrors upon himself. Aguirre dares to defy nature to such an extent that nature inevitably takes its revenge on him.” (Cronin).

Filming the epic tale became a legend, “a voodoo of location” in a remote jungle rife with fevers. Herzog had never been to Peru before the filming, and felt that when he arrived on the location, “everything was exactly as I had imagined it. It was as if the landscapes had no choice; they had to fit to my imagination and submit themselves to my ideas of what they should look like.” The landscape is not decorative. “The jungle is really all about our dreams, our deepest emotions, our nightmares. It is not just a location, it is a state of mind. It has almost human qualities. It is a vital part of the characters’ inner landscapes.” (Cronin).

The encampment of 450 included 270 native people acting as extras but only 10 crew members, and there was a very low ratio of footage shot to that actually used. Herzog recapitulated Aguirre’s fictional journey, floating everyone on rafts down the Huallaga and Nanay Rivers through the Urubamba Valley in Peru. The danger feels real because it was. Precautions were taken (you can see in some shots that the actors have been tied to the rafts during their passage through the rapids) to make the experience as safe as circumstances would permit, but complete safety was not always possible. The film was shot in chronological order, since Herzog believed the story could not be conveyed filming out of sequence. The Indians were, in fact, politically sophisticated, members of a local socialist co-operative, and had a deep understanding of their own history. Herzog said, “One time they told me that the Spanish conquest was a real shock for them. It was as if creatures from another planet had landed in spaceships and taken over the whole world. This really was something that every Indian felt inside of them.” (Cronin).

When Herzog finished the script, he sent it immediately to Klaus Kinski, with whom he had never worked before, although they had lived in the same boarding house when Herzog was a child, and Kinski a little older. Herzog said of their meeting, “At that moment I knew it was my destiny to make films, and his to act in them.” Later, Herzog said he did not know the dialogue he was going to shoot in Aguirre until almost the moment the camera rolled, quite understandable given the extreme circumstances of the filming. “The shoot was very tough, and every day, Kinski could see the problems I was having. Yet, he continued to throw tantrums, create scandals, or simply scream if a mosquito appeared.” Herzog conceded that Kinski was “probably the most difficult actor in the world to deal with. Working with Marlon Brando must have been like kindergarten compared to Kinski.” He shrieked at the cinematographer to keep the camera only on him. “We had mutual respect for each other, even as we both planned each other’s murder.” Did Herzog threaten to kill Kinski when he balked at continuing Aguirre? Herzog confirmed that Kinski’s habit of walking off shoots made the threat necessary. “The press later wrote that I directed Kinski from behind the camera with a loaded gun, a beautiful image. I love the press for its ability to be so lyrical.” Peter Bradshaw wrote, “The making of (this film) has passed into cinema lore as hardly less daring and hardly less mad than its subject matter.” Herzog said in retrospect, “Sure, the man was a complete pestilence and a nightmare to work with, but who cares? What is important is the films we made together.” After Kinski’s death, Herzog immortalized their friendship in the hilarious and frightening documentary, My Best Fiend.

Fellini may have been an admirer of Ingmar Bergman, but Herzog decidedly was not, “I cannot bear psychological films at all, that’s what I can’t stand about Bergman.” (Franklin). “With Herzog, auteurism is carried to its farthest extension where the work of art and its creator become virtually indistinguishable.” (Franklin). “Film is not the art of scholars, but of illiterates. And film culture is not analysis, it is an agitation of the mind. Movies come from the county fair and the circus, not from art and academicism.” (Franklin).

From the beginning, Herzog produced his own films in order to insure complete creative control. Amazingly, Aguirre cost only $370,000, a third of which was Kinski’s salary. It was shot with a single camera, the one Herzog had “liberated” from the Munich Film School many years before, because they wouldn’t agree to lend it to him. “It was a very simple 35mm camera, on I used on many other films, so I do not consider it a theft. For me, it was truly a necessity. I wanted to make films and needed a camera. I had some sort of natural right to this tool. If you need air to breathe, and you are locked in a room, you have to take a chisel and hammer and break down a wall. It is your absolute right.” (Cronin).

Because part of the financing came from a German tv station, the film was shown on television the same day it opening theatrically in Germany, so the film’s German run was brief. Picked up by a French company it played in Paris for 2 ½ years, and achieved international acclaim. Music is an integral part of all his projects, and this film has an unusual and memorable score by Popul Vuh. Even the background sounds are carefully orchestrated. “We spent weeks recording the birds and the soundtrack which was composed from eight different tracks. There is not a single bird that has not been carefully placed as if in a big choir.” (Cronin). The film was originally made in English. In the editing room, Herzog decided the language was distracting and released it with German dialogue.

The implacable jungle and the monomaniacal conquistador seem evenly matched. “I have never made a film about a figure for whom I have not felt compassion—not even Aguirre,” Herzog insists, reveling in characters who live in the margins. “Klaus Kinski himself is remarkable. Not nearly as hammy as you might expect, he radiates insane power, cruelty, cunning and charm, simply by standing there, a ghostly madman’s smile playing about his lips, pale china-blue eyes gleaming.” (Bradshaw).

Herzog said, “In Germany, in my own country, people have tried to label me personally as an eccentric, as some sort of strange freak that does not fit in any of their patterns. And that’s ridiculous. They are insane” (in Ebert). 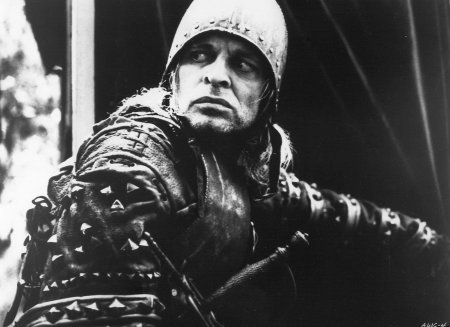