All Quiet on the Western Front may be the definitive anti-war film, not for the Great War alone, but all wars. It was the most powerful statement about WWI by the generation that fought it. Andrew Kelly writes in Cinema and the Great War: “No war was as violent, pointless and miserable as the First World War. With 8 1/2 million dead and 20 million injured it was a disaster unparalleled in human history. There was nothing great about the Great War, except the scale of despair and destruction.” This film was so controversial that a tangle of different versions existed from the effort to make its uncompromising message palatable to the widest possible audience. The version shown at the North Carolina Museum of Art is the Library of Congress restoration, printed from the original camera negative of the American release, with a few additions from British and French prints.

To begin with, All Quiet… was made in both silent and sound versions, since not every theater had adopted the new technology by 1930. The LOC labored to restore the original soundtrack, removing distracting layers of music and sound effects added over the years. The original track attempted to recreate, as closely as possible, being in a war zone. The experience is so intense, two older couples walked out of the NCMA screening after the first bombardment. The 1934 re-release was 90 minutes long, 45 minutes shorter than the original. A 1939 release added an extra reel of news footage at the beginning and end, with a narrator decrying the rise of Nazism. In 1950, there was a Cold War version, with swing music added at the end. In 1984 a dubbed reconstruction aired on West German television. One of the prints used in that restoration was from the personal collection of Joseph Goebbels, who had denounced the film at the premiere and burned Remarque’s novel. Ironically, All Quiet…‘s greatest enemy had contributed to its preservation.

Erich Maria Remarque was born with the middle name Paul. After his mother died, he adopted her name, giving his to the hero of All Quiet on the Western Front. It was based on his experience in the trenches, and is told entirely from the German foot soldiers’ point of view. Remarque’s first professional writing was as an advertising copywriter, part of the reason for the novel’s accessible style. When it was published in 1929, it swiftly became the best selling novel of the 20th century, although the complete text was not available in the US until 1975. The translator, A. W. Wheen made a valuable contribution when he rendered Im Westen nichts Neues as not the literal Nothing New on the Western Front, but as the more poetic All Quiet on the Western Front. It remains in print, in effect an early cross-over hit, a serious literary novel that was widely read. It is still required reading in schools. The book and movie made him a fortune, and he spent the rest of his life trying to equal its success. He became a refugee from the Nazis (and they murdered his youngest sister for her anti-fascist activities). He wrote his romance with Marlene Dietrich into his novel Arch of Triumph, and eventually married another movie star, Paulette Goddard. 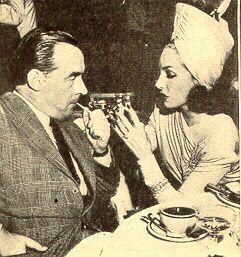 A very surprising combination recently seen at the Mocambo was Novelist Erich Remarque and Lupe Velez. He usually pals around with Marlene Dietrich, who isn’t exactly a good friend of Lupe.

There is no glory in Remarque’s war; it is a savage force sacrificing men and boys to a patriotic ideal. In Germany, the objections to it were more complex, since a common soldier hero ran contrary to the glorious rhetoric of novels written by officers. Paul Baumer becomes disgusted with a military world where “We learned that a bright button is weightier than four volumes of Schopenhauer.” The book was criticized by the right for its debunking of the military, and by the left because the author fought in the war, rather than merely denouncing it. 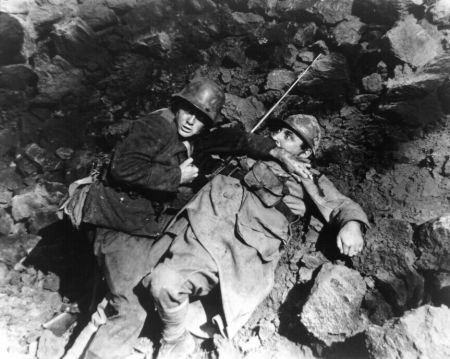 Unlike the film, the novel begins directly in combat, without the scenes of Paul’s pre-war life. He muses about his schoolmasters, “The idea of authority, which they represented, was associated in our minds with a greater insight and a more humane wisdom. But, the first death we saw shattered this belief. We had to recognize that our generation was more to be trusted than theirs. They surpassed us only in phrases and in cleverness. The first bombardment showed us out mistake and under it the world as they had taught it to us broke in pieces.” He decides 18 year old boys are perfect for combat, since they have separated from their parents, but have not yet forged new bonds with wives and children. 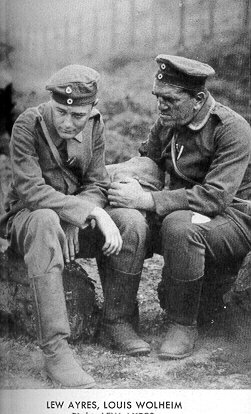 Director Lewis Milestone was born in Russia and was a veteran of the Signal Corps, where he edited Army footage during WWI. The Signal Corps welcomed Hollywood technicians, but not directors, deeming them superfluous for propaganda purposes. He was greatly influenced by the innovative editing techniques of Sergei Eisenstein, and wanted to experiment with the new possibilities of sound. His cinematographer, Arthur Edeson, had photographed Robin Hood and The Thief of Bagdad for Douglas Fairbanks, and would later shoot such classics as Frankenstein, The Invisible Man, The Maltese Falcon and Casablanca. Universal built a large-scale battleground, and other sets, remnants of which remain on the Universal City Tour. Costs escalated to almost 1 1/2 million dollars, several times the studio’s usual budgets. Authentic uniforms were imported from France, and German Army technical advisors drilled the cast. There was no cooperation from the US Army. Movie soldiers were recruited from American Legion posts; but Milestone used only 150 extras for the battle scenes. He wanted his film to be completely anti-romantic, and undercut his own action sequences by losing the protagonists in the confusion of battle. The quest for authenticity was so complete that the chief sanitary inspector of Orange County, California shut down production for a while to make sure conditions were safe. Edeson reported that he said that except for real bullets, “we might as well have been in the war.” 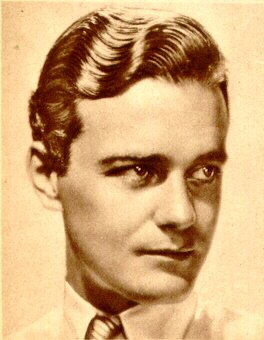 It seems that there are also he-Cinderellas. As for instance, this charming Arizona boy, Lew Ayres. I have never known any other boy in Hollywood to get such a break. With the exception of Betty Bronson in “Peter Pan”, I have known neither boy nor girl to have the luck to come to the studios without experience and be cast for the lead in “All Quiet on the Western Front.”–Harry Carr. (NB: Betty Bronson wouldn’t have been nearly as convincing in the part)

Several actors were considered for the lead, including Douglas Fairbanks, Jr., and the author of the novel himself. Sensitive Lew Ayres was cast as Paul Baumer, having recently debuted opposite Greta Garbo in her last silent film, The Kiss. Here was the bestial Hun of the decade before; a conflicted young student, not a monster who tossed babies out of windows. Ayres is at somewhat of a disadvantage in All Quiet…, since he has to articulate on screen the hero’s internal monologue. His inexperience (along with the entire industry’s as they puzzled out talking pictures) coupled with overwritten dialogue is occasionally distracting. But, his transformation to a stunned, hardened veteran is superb, and the tender scenes with his mentor and surrogate father, Louis Wolheim, deeply touching. Paul Baumer was certainly his greatest role. Ayres was a pacifist, a spiritual man and student of comparative religion. Influenced perhaps by his role in All Quiet…, he became the most famous conscientious objector of WWII. He distinguished himself in the Medical Corps but his career languished; unforgiven by a public fighting another World War. 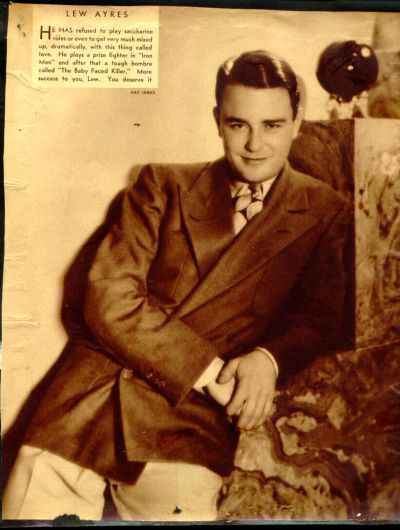 He has refused to play saccharine roles or even to get very much mixed up, dramatically, with this thing called love. He plays a prize fighter in “Iron Man” and after that a tough hombre called “The Baby Faced Killer”. (Released as “Doorway to Hell”) More success to you, Lew. You deserve it.

All Quiet… was censored and banned in many countries. The French did not like aspersions cast upon the virtue of its women. Germans objected particularly to the character of Himmelstross, who becomes a sadistic Army-sanctioned martinet, and to the discussion amongst the soldiers about the causes of war. Germany was the 2nd biggest European market for American films in 1930, and Universal wanted to make a cut that would be acceptable there, partly because it was the homeland of Universal’s founder, Carl Laemmle. But the Nazis disrupted the premiere, Joseph Goebbels made a speech denouncing it, mice, stink bombs and sneezing powder were released in the theater and outside, the SS instigated a riot. The Nazi paper called it “A Jewish lie” and “a hate film slandering the German soldier.” The film was banned inside Germany, but the German language version played to full houses just over the border, and special trains and buses transported the audience to theaters in Switzerland, France and the Netherlands. In Poland, the ending was cut. All Quiet… was banned in Italy and did not play there until 1956. It was banned in Austria, Hungary, Bulgaria, Yugoslavia, and New Zealand. It finally played Australia with severe cuts. The film was not seen in Germany again until 1952. 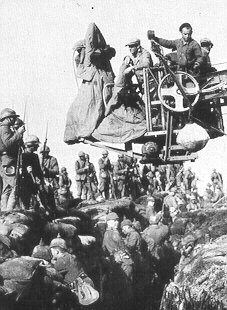 Cinematographer Arthur Edeson muffled his camera in heavy blankets for the exterior shots.

All Quietwon the Best Picture Oscar for 1930, and Milestone won for his direction. Unlike so many “Best Pictures” it may actually have been the best film of the year. The film’s completely unsentimental view of combat brutality, and its frankness in sexual and other matters, would never have been permitted in Hollywood after the Production Code was enforced in 1934. There was some talk that Universal’s president, Carl Laemmle, should be nominated for a Nobel Peace Prize, but, perhaps it was “Papa” Laemmle himself who started the rumor. Howard Barnes wrote in the NY Herald Tribune, “With all preceding war stories brought to the stage or screen…there has always been an inevitable glamour attaching to fighting, no matter how carefully avoided…In All Quiet there is no glamour. It is courageously bitter.” Variety‘s critic wrote: “It is recommended that the League of Nations should distribute it in every language to be shown every year until the word War shall have been taken out of the dictionaries.” The London Times critic said, “Realism reaches its zenith in this picture. I hate it. It brought back the war to me as nothing has ever done before or since.”

(All Quiet…still from Jerry Ohlinger’s Movie Material Store. Still of Ayres and Wolheim from Daniel Blum’s A Pictorial History of the Talkies (1958). Location still from Aug.-Sept. Films in Review article on the American Society of Cinematographers. Portrait of Lew Ayres from Marjorie Glas’ 1931 Movie Star Scrapbook. Headshot from February, 1930 Screen Secrets. Photo of nightclubbing author from January, 1942 Silver Screen. Andrew Kelly wrote an entire book on AQWF: Filming All Quiet on the Western Front, 1998, I.B. Tauris Publishers, distributed by St. Martins’s Press in the US. This book is an invaluable reference on this subject; unfortunately I found it only after writing this essay. I’ve added some additional material, but since Kelly’s Cinema and the Great War was such an excellent source, I lean primarily on his earlier book.