Bob Fosse’s sprawling, frantic autobiography/meditation/rant is a razzle dazzle musical about a driven perfectionist addicted to cigs, sex, speed, and booze.  It’s unique, a blackly comic musical about open heart surgery tinged with the edgy subjectivity of 70s cinema. Nervy and jangling, Scheider’s take on Fosse’s egomania results in one of the rare song and dance films devoid of optimism.  “The best film I think I have ever seen” (Stanley Kubrick).

Bob Fosse signed onto All That Jazz as director, co-producer, co-writer and, of course, subject.  “Emotionally and artistically, the project was without question the most ambitious work of his career, and judging by his constant cough, very likely his last.  ‘I’ve only got one more film in me…and this is it.’ (Wasson 437).

Fosse for all his fame as a choreographer had never been the star of a show, and All That Jazz was intended to correct that.  He had just directed Lenny, with Dustin Hoffman as Lenny Bruce, and he was inspired by the research that film involved, and began interviewing friends, lovers, and associates, asking them fearless questions about himself, unafraid of the sharp replies.  In All That Jazz, his alter ego directs his own death.  Was it a way for Fosse to gauge reaction to his own funeral? Many of the actors in the film were people from his own life, including of course, Ann Reinking, one of his many exes.  He hired a cardiologist, so the heart surgery would be real. Joe Gideon lives at 58 West 58th Street, just like Fosse.  Fosse worked on Lenny and Chicago at the same time, just as Joe Gideon multitasks to the edge of insanity; an intensely creative person addicted to stress (among other things). It’s a musical drama, but also, fantasy, documentary, confession.

He wanted Robert De Niro to play him, then Warren Beatty and Jack Nicholson. Dustin Hoffman?  Keith Carradine?  He auditioned Ann Reinking over and over—to play herself.   Fosse wanted Jessica Lange, at that time considered to be just another starlet, to play the Angel of Death.   Hundreds of girls auditioned for the role of Joe Gideon’s daughter.  Finally, it was down to just two.  He asked them each to light his cigarette.  He put the cigarette in his mouth.  The first girl struck a match and lit it.  But 12 year old Erzsebet Foldi lit the match, took the cigarette out of his mouth and touched it to the fire, then handed it back.  She got the job.

He settled on Richard Dreyfuss as his alter ego. Dreyfuss was at the peak of his stardom, even though he wasn’t a dancer. But when Dreyfuss came to work with Fosse, he  couldn’t cope with Fosse’s abrasive style. At his friend Roy Schieider’s apartment Dreyfuss said, “I don’t think I want to do this movie.  I don’t like Fosse and he doesn’t like me.  I just don’t feel mentally prepared to do this thing” (Wasson 461).  Later he said, “For a few years I told myself that I was well out of it, and then I finally faced up to it—I’d given up a chance to work with Bob Fosse, and it was stupid of me.  I told him so myself.” (Gottfried 376).

The hunt for a leading man was on again.  Paul Newman, Alan Alda, Gene Hackman, George Segal, Elliot Gould, Robert Blake, Robert Redford, Ryan O’Neal, James Caan.   Should Fosse play the part himself?  A 4 pack a day workaholic smoker, with one heart attack down:   probably a bad idea.  Warren Beatty again, Alan Bates, Jack Lemmon, Jon Voight. Roy Scheider wasn’t any more of a dancer than Dreyfuss, but he was interested, and crafted an autobiographical monologue to audition.  Fosse decided he was “wryly, wearily, sexily at ease. ‘ Okay,’ Fosse said. ‘You’re the guy’ (Wasson 462). Filming started in two weeks. Scheider was worried about having to dance, talk and act simultaneously.  But, after wide ranging conversations about the character of Joe Gideon, Fosse was confident, and that he could choreograph around Scheider with actual dancers.

Production, in spite of meticulous storyboarding ran over.  Fosse spent at least 50% of his time on the set deciding what he wanted to do, like another obsessive auteur, Charles Chaplin.  When Fosse came up with a new idea, the storyboard/production schedule was rearranged.  He shut down for three weeks in the middle of production to rehearse the “Airotica” dance. He scouted 25 hospitals for the right one for the surgery scenes.  Filming was at Astoria Studios in Queens, then a more derelict facility than now.  Cast and crew left on buses from Columbus Circle every morning at 5:30 am, and by 7:00 pm there was a producer to tell Fosse to make the last shot of the day.  An ice cold glass of Pinot Grigio for Fosse signaled to all that the day was ending.

He was shooting 20 to 1, a huge ratio of unused to used shots. The finale was shot at a black box theater at SUNY Purchase.  When Columbia balked at the cost, Fosse assembled an hour of footage and sent an associate to shop it to other studios, until Fox consented to the completion funds.   When it finally shot, after myriad changes, it took 15 days for 7 minutes of music. Roy Scheider said it was the hardest physical thing he ever had to do.  “I think he knew that his death was not going to be as wonderful as this, so that’s why he spent so much time thinking about making it wonderful in the movie (Wasson 483). 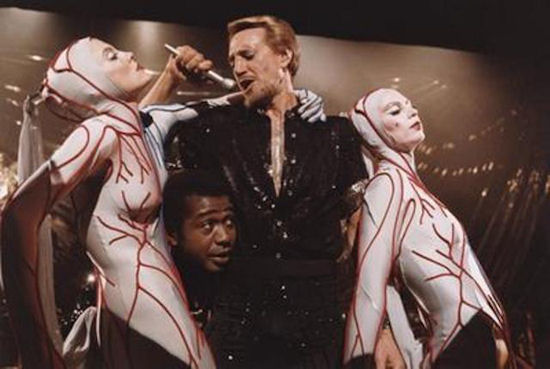 Fosse was hard on his own footage.  One person thought that if he had been editing, only 20 minutes would have remained.  “Bob wanted you to be hard on him, so it was difficult to say you liked it, and I really liked it, I loved it” one of the editors said.  “There is no dress rehearsal for life.  This is it.  Every day, every moment, this is the show” Fosse said (both Wasson 471).  Editing would take a year, a very unusual situation. With one artery still partially clogged, Fosse had been having chest pain through the shooting, and now he continued to have chest pain through the editing.

After the visuals were cut, Fosse went on to supervise the sound mix.  There are 96 perforations in one second of film, and if the sound was off by one, Fosse would hear it. During 12 hour days he recorded Roy Scheider’s cough himself, the taps for his young alter ego’s dance, and the finger snaps of the Airotica dancers. It had to be perfect.  Screenings for his friends and associates were tempered with their alarm at the way they were depicted, and the way he depicted himself.  At 20th Century Fox, he had a nerve wracking screening with the head of production, the first woman ever to hold that position, Sherry Lansing.  In tears, she said, that the film was a masterpiece, one of the best she had ever seen in the history of film.  “I still do.  It still is” she says (Wasson 492).

After it won the Palm D’Or in Cannes (tieing with Kurasawa’s Kagemusha) Oscar hopes were high. Oscar nominee for Best Picture, Best Director, Best Actor in a Leading Role (Scheider), Best Cinematography (Giuseppe Rotunno), and Best Writing, Screenplay Written Directly for the Screen (Fosse, Robert Alan Aurthur). Oscar winner for Best Film Editing (Heim), Best Art Direction-Set Decoration (Philip Rosenberg, Tony Walton, et al.), Best Music, Original Song Score and Its Adaptation (Ralph Burns), and Best Costume Design (Albert Wolsky). At the Oscars, he did not expect to win anything.  He had been denied the Tonys he thought he deserved so many times (in spite of winning 8 for Choreography).  But, the film won the first three Oscars, for music, costumes and art direction.  Then, the film won for editing, and they hoped the big awards would not be swept by Kramer vs. Kramer after all, but it was not to be.  The film was added to the National Film Registry in 2001.

Fosse hit the talk show circuit to promote his film, and talked to any interviewer who asked about All That Jazz.  Reviews many have been mixed, but popular culture made it a huge hit.  It was “Meet Me In Saint Louis meets Citizen Kane” (Wasson 494).  He thought the film would literally kill him, and in a way, he was almost embarrassed that it didn’t, in fact, he lived for 8 more years, until 1987, dying at age 60.  But, he had presented an authentic portrait of himself, and it was embraced.  At last, he was a star.

All His Jazz: The Life and Death of Bob Fosse by Martin Gottfried, Fosse by Sam Wasson