Impish Amélie is shy, but blossoms when she discovers a knack for doing good deeds.  Devoted to her Monmartre neighborhood and delighting in simple pleasures, Tatou’s indelible gamine embodies all the mischievous promise of the City of Lights.  “Movies have been in need of an enchantress…In the role of Amélie… Tautou is utterly captivating. Ditto the movie. There’s magic in it” (Rolling Stone).

If there is a contemporary film that embodies all that we dream about in the dream city of Paris, it is the Paris of The Fabulous Destiny of Amélie Poulain, to give it its complete title.  This is still the highest grossing French language film ever at the American box office (boxofficemojo.com).  It broke the bonds of the art house ghetto, one author recounting that when he saw it at a British cinema, there was a notice in the lobby, “you should be aware that this is a foreign film, with subtitles” demonstrating how rare it was for a popular film to be in a language other than English.  It got five Oscar nominations, including Best Foreign Film, losing to No Man’s Land from Bosnia Herzegovina.

Jean-Pierre Jeunet began his directorial career with tv commercials and moved onto award winning short films with his collaborator Marc Caro, using puppets in the style of Jiri Trnka or Tim Burton.  His first feature was the blackly comic Delicatessen, and then City of Lost Children garnered him a Hollywood assignment, to direct Alien: Resurrection, the 4th film of the franchise.  Yearning to return to more personal filmmaking, he wrote and directed Le fabuleux destin de Amélie Poulain “an authentic fairy tale” “made in Monmartre” for about a 10th of his Alien budget (Lanzoni 372).

”For years, I have collected a list on my PowerBook of things that make me very happy, from private observations to personal memories,” Mr. Jeunet recalled …”So many of these little things, all of them positive and magical, have turned up in some form in ‘Amélie.’ ” (NY Times 2001/10/28) He was also influenced by his early love of cartoons and savors a shot in the Abesse Metro where for an instant, Amelie looks just like Olive Oyl.  Other shots may remind you of Wil E Coyote, or a surreal Tex Avery moment. 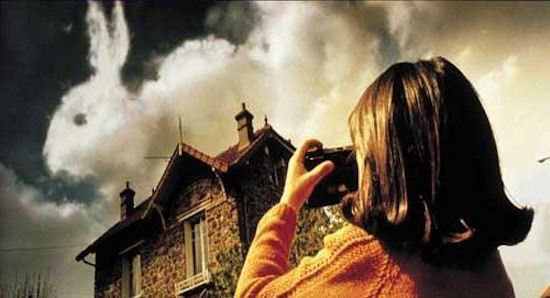 “Mr. Jeunet is notorious for his fastidiousness. ”I set up every single shot in advance with storyboards and photography,” he explained. ”Sometimes, I’ll spend two to three days devising a single transition.” In making ”Amélie,” Mr. Jeunet visited every stop of the Paris Metro before settling on the perfect subway entrance for a brief background shot (New York Times 2001/10/28).

The director said, “The Nouvelle Vague was—ugh!—terrible, really terrible for French cinema.  I got so bored with all these sad stories, films about couples fighting in their kitchen for two hours.  Please give us a break!”’ Amélie’s gentle optimism is a hard to come by in films from any country.  I remember a pediatrician’s visit, when my daughter was 12, in which her doctor said, “Oh you should take Adrian to see Amélie” and I had to remind her, it IS an R rated movie, you know.  (Held to a much stricter standard, as was last week’s Populaire, because of its foreign provenance?) But audiences simply remember how good it makes us feel.

Miramax had committed itself to promoting foreign language films and had great success with Cinema Paradiso and Life is Beautiful (both Italian films).  Audrey Tatou, in this Miramax release, had no trouble winning over audiences around the globe.  Jeunet  was fortunate in his choice of actress to portray Amélie. He wrote the film for Emily Watson, but her French was not fluent enough, and she had a previous commitment to Gosford Park. “I saw very few French actors for the role, only two in fact. Audrey happened to be the first one. Usually, I would meet 15 or 20. Here, it happened like a miracle. It took about four seconds for me to realize that it was going to be Audrey and no-one else. It’s a very emotional experience because you’re imagining someone in your mind for months and suddenly to have that person materialize in front of you, it’s like a miracle (BBC).  Many critics compared her favorably to another Audrey, Audrey Hepburn.

Playing Nino is Mathieu Kassovitz, an actor, writer producer and director.  His 1995 film La Haine (Hate) which he wrote and directed is the polar opposite of, Amélie, a hard look at the minorities struggling with poverty, racism and the police in the outskirts of Paris.

Another actor worth noting is Peg Leg Sam (Jackson) who you see dancing in “Born for Hard Luck.”  He was a blues musician, documented by the UNC folklore department in the 1970s.  How Jeunet (and) Amélie found it I don’t know. If you want to see the whole film, and read a little history: http://www.folkstreams.net/film-detail.php?id=1

Jeunet shot in Paris, mostly within the tourist heavy neighborhood of Monmartre, which trades on its association with great artists of the past.  He shot in the marble and zinc Café des Deux Moulins, which we tried and failed to find on our recent trip to Paris, although we did find Amelie’s grocery stand and her movie theater.  He loves the Paris of the 1940s and 50s, like that in the photos of Robert Doisneau, as he attempts to create a Paris of “national nostalgia” (Lanzoni 376) Jeunet lives near the Rue Lepic in Monmartre, a street he knows well and included in his film. 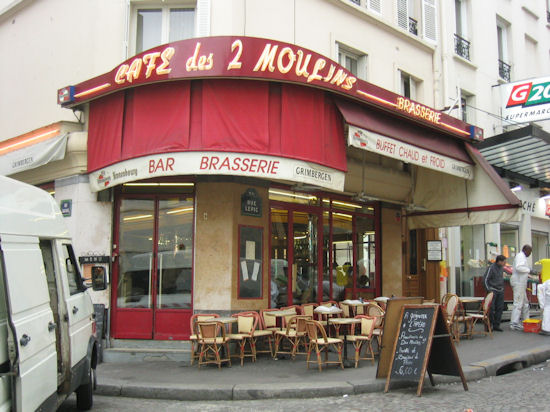 Although the director’s previous film, The City of Lost Children was distinctly dystopian, Amélie is utopian in its outlook. This romantic film uses digital techniques to create a fairy tale aura, using colored filters and retro accordion music, and the image of a “boite a souvenirs” the memory box that Amelie finds and begins her adventure.  The blending of digital effects and conventional photography creates an eccentricity unique to Amélie and her deeply personal and imaginative world view. Amélie and Nino create a surrogate family to replace their dysfunctional ones, like the pictures that Nino collects in his scrapbook.  Afterwards, it became a trend in French cities, according to Biba magazine in 2004, to establish residents’ associations and small-scale retail establishments calling the participants “amelie-poulanises” and trying to recreate the warm connections of communities within a larger city and an appreciation of “trade-village” (Austin 159). Amelie-poulanization encouraged modern quaintness, a French version of the artisanal yearnings of the Brooklyn hipster.

The Rue Mouffetard, featured in Cleo from 5 to 7 as a rather run-down section of Paris, is now a thriving market street, which is how Jeunet portrays it here.  The director’s exuberant world view, with visual effects intensifying her feelings is used the same way that Varda’s Nouvelle Vague camera techniques did for Cleo forty years earlier.

”The film was like a cloud of happiness on which everyone in the world would like to float,” said Laure Morandina, the head of Montmartre’s neighborhood association. ”There are moments of the film that touched something universal and also captured the spirit of Montmartre as a village where even if the whole world visits us, we still know all the shopkeepers.” (New York Times 2001/8/16). Her quirky fashion choices influenced French designers.   Foreign tourists (like my family) searched for the film’s landmarks although some were disappointed that, when Le Café des Deux Moulins was sold, the new owner took out the tobacco stand, the better to accommodate the number of tourists who wished to eat a green salad with warm goat cheese there. 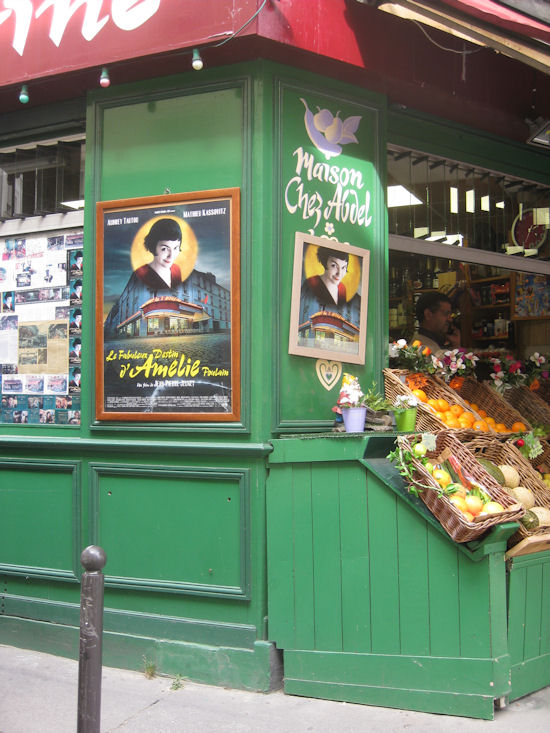 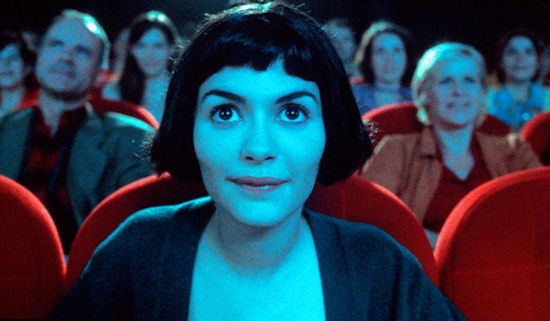 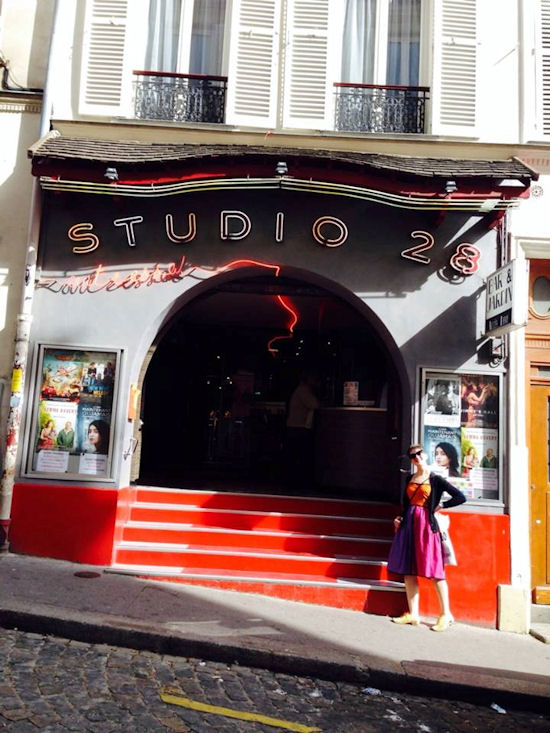 An art house cinema with decors by Jean Cocteau, Moviediva, jr. stands outside.

Yet, there was a backlash against its optimism.  “When you create a cinematic bon-bon as sweet as this one, some people are going to insist on spitting it out” wrote Daniel Zalewski in the New York Times. The one country that at first refused to celebrate the film was France, who refused to show the film at Cannes, and grumped that the view of Paris was sanitized, devoid of dog poop and minorities, digitally scrubbed of graffiti and depopulated of cars, and didn’t reflect the ethnic diversity of modern Paris.  The film was called fascist in its stubborn refusal to acknowledge reality.

Marc Caron said it was courageous to make a sweet film about generosity. It’s more fashionable, he said, to be violent.” (NY Times 2001/10/28).  This is my continual rant.  Audiences search for the edgy, seeking to normalize once marginal views of sex and violence.  Now, these days, there is nothing more edgy than to be kind. 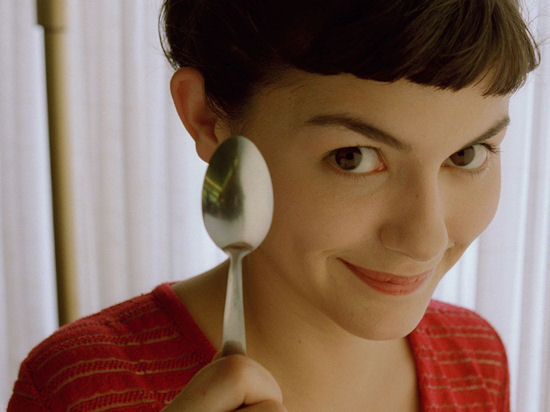