After the Crash and before the New Deal, Americans were leery of the imploding financial system. Walter Huston (who’d just played the title role in Abraham Lincoln for D.W. Griffith) is folksy banker Tom Dickson, making loans on character rather than collateral. A run on the bank tests his character, as it would later test George Bailey’s in It’s a Wonderful Life.

American Madness began as a screenplay called Faith, by Robert Riskin, the only original one (not adapted from another source) he did for director Frank Capra. He probably based his leading character on one or both of the Gianinni Brothers, whose Bank of America prided itself on loaning to the underdogs more conventional bankers disdained. In 1930 A.P Giannini told Congress, “The little fellow is the best customer that a bank can have, because he is with you. He starts in with you and stays to the end. Whereas the big fellow is only with you so long as he can get something out of you; and when he cannot, he is not for you anymore.” The year before, his bank had fought off a hostile takeover, but not before triggering a run much like that in American Madness.

One of the Bank of America’s “little fellows” was Harry Cohn’s Poverty Row studio, Columbia Pictures. They kept faith with Columbia as other studios struggled financially during the early days of the Depression. Part of the motivation for Faith was to “propagandize for the liberal lending policies the Gianninis stood for and to help ensure that their bank would survive and maintain its character” (McBride). When this film was made, Herbert Hoover was still in office, and FDR’s Bank Holiday, permanently restructuring the American banking system, was still a year away. One fourth, about 5000, banks had failed in the US, and a fourth of the workforce was unemployed.

Originally, Allan Dwan was to direct, but he, and then a second director were replaced after a few days and Capra assigned. He had the set redesigned to heighten the dramatic impact of the scenes at the bank, and Edward Bernds, a sound recorder who later became a director said, “I fully realized for the first time what directing really was. Scenes that had been dull became lively, performances that had been dead came alive.” Much of the films visual style was already outlined in Riskin’s script, even the dramatic montage leading to the run on the bank that is the film’s highlight.

As Patrick McGillgan said in his introduction to the screenplay, “Nobody handled crowd scenes better than Capra, and Walter Huston was not the first or the last of his leading men who the director guided to a tour-de-force performance. Not often revived, American Madness was important and admired in its time. It was the first of the Capra-Riskin rabble rousers, the first of their collaborations to venture into political issues and depict a world where ‘populist heroes right social wrongs, demonstrating that folksy common sense and immediate action are the only possible cures for an American society groping its way out of the Depression.'” (quoting Sam Frank). 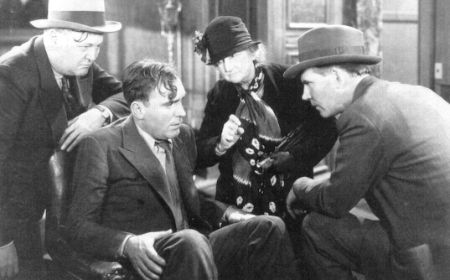 The timelessness of Capra’s cinematic politics are the result of his collaboration with writer Robert Riskin. Capra, a conservative Italian-Catholic Republican who never voted for Franklin D. Roosevelt and Riskin, a liberal Russian-Jewish Democrat complimented one another perfectly. “They were symbiotic on every level, including that of politics. Their friendship was real, their collaboration close, mysteriously kindred and complexly interwoven. In private, they functioned as each other’s best audience. In a word–borrowing from one of the characters of Platinum Blonde–they ‘vibrated’ well together.” (McGilligan). 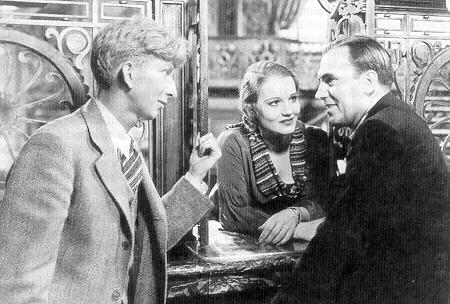 Walter Huston, father of director John Huston, was one of the many Broadway performers who came to Hollywood at the dawn of the talkies. He was born in 1884, so he was no youth when he became a film star. He made 48 films, including Dodsworth, Rain (opposite Joan Crawford’s Sadie Thompson) All That Money Can Buy (aka The Devil and Daniel Webster, as the Devil) and as James Cagney’s father in Yankee Doodle Dandy. He played President Lincoln, with a script by Stephen Vincent Benet, for D.W. Griffith in 1930. He also the President in one of the more bizarre visions of that office in Gabriel Over the White House, which proposed that what Depression America needed was a good Fascist. The film was produced by William Randolph Hearst’s Cosmopolitan Pictures, and was as close as Hearst ever got to his much coveted office of American President. Huston occasionally returned to the stage, and was the first to sing Kurt Weill’s “September Song” in Knickerbocker Holiday. You’ll see him later in the NCMA Winter 2002 Film Series in his Oscar winning role in Treasure of the Sierra Madre. 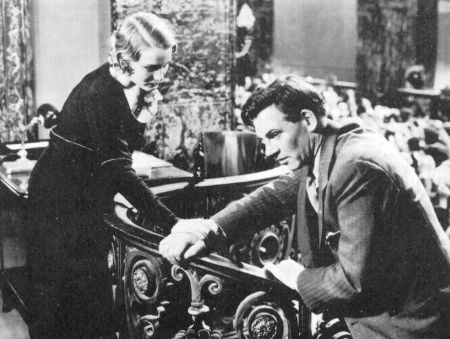 He played banker Tom Dickson with a “virile vitality” and told Picturegoer Weekly in 1933: “I figure I’m quite a bit the type of man he was, wanting from life the same things he wanted, with pretty much the same set of values and beliefs. He didn’t demand too much of his life. Neither do I. He believed in people and expected the best of them. So do I. He didn’t worry about things he couldn’t help. Neither do I. He was roused to action when there was vital and imminent need–I would be likewise. He wouldn’t have given a thought to mistakes that are done and past. I wouldn’t either. He wouldn’t have worried about what’s to come when his life is ended. I don’t. I am content to leave such matters to those who have control of them. I haven’t.” 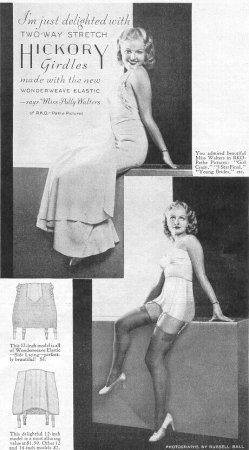 Polly Walters’ switchboard operator starts the run on the bank with her gossiping (but not in her girdle).

American Madness proved to be too topical in some cities, like Baltimore, which experienced real bank runs shortly before the film openedand closed rather quickly. The Stage in August, 1932 gave the following opinion: “Now we have American Madness, produced by Columbia and Frank Capra, showing the scenes of wild panic incident to a run on a big bank. Although it is frankly propaganda urging us to have faith in our poor, dear bank presidents, it is effective and occasionally exciting melodrama. Certainly Mr. Capra’s scenes of the rapidly growing mob in the bank are expertly handled and make grand pictures. Perhaps the story is improbable and the happy ending impossible, but whether you agree with President Walter Huston’s bank policy (“to stop hoarding and get business running again”) or with the depositors hammering on the cages for their cash, you feel that American Madness is a good show, and hokum only part of the time.” 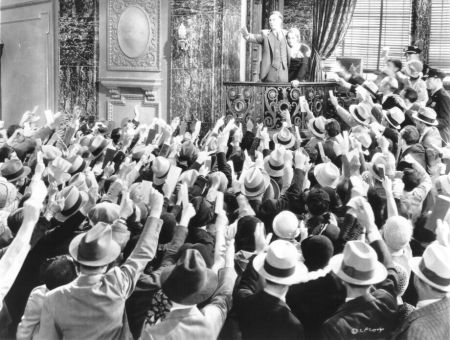