Beginning where the first film ends, Apu and his family move to the holy city of Benares (Varanasi) as he continues his academic and spiritual education through his adolescence. “What makes it almost unparalleled in cinema is its fusion of poignancy, humor and poetry…it concerns a poor boy growing up in India nearly a century ago—and yet, miraculously, it concerns us all.” (Andrew Robinson New York Times).

Satyajit Ray was born in 1921 into a family with strong ties to the arts. Calcutta had been for a time the capital of British India, and it was the country’s most cosmopolitan city, with a thriving arts community and an educated population who looked West for ideas of modernity and reform. He went to school at a college founded by poet and Nobel Laureate Rabindranath Tagore, a close family friend. Ray had always loved Hollywood and European films. When French director Jean Renoir came to India to film The River, Ray helped him scout locations and connected him with local actors. They responded to one another immediately, and Renoir encouraged him to film the novel Pather Panchali, his long nurtured dream, in a non-Hollywood style. Ray’s visceral connection to the Italian neo-realist style was deeply influential in making his first film. 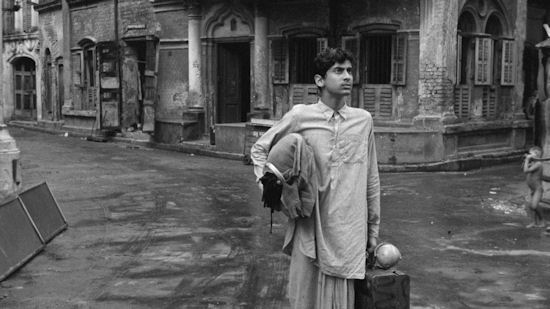 The story of Apu’s journey from childhood to adult responsibility is a metaphor for an India seeking modernity. Education, the migration from village to city, and the transformation brought by the railroad is reflected in the life of a rural boy stepping onto the national, and after Ray’s film became a world-wide success, the international stage. Education is central to Apu’s life. In the city, he identifies with the hybrid colonial (and post-colonial) urban culture. “There are numerous shots of him observing, thinking, reacting—a whole internal process that Ray traces without ignoring its social and cultural ramifications (Ganguly 12). This reflects directly upon the earlier film, in which little Apu seems to absorb all he sees.

Ray hadn’t intended Pather Pachali to have a sequel when he filmed it. He chose the novel, which was autobiographical for its famous author, Bibhutibhusan Banerji, but not for Ray, who was a city dweller born. He had hoped that if audiences were unwilling to try the work of a new director, they could be persuaded by the subject, the adaptation of Banerji’s popular book. Looking for a second project, the global acclaim for his first film urged him towards continuing the story of Apu. Finally, he resigned from his day job at a British owned advertising agency to be a full time filmmaker. Writing to a colleague he said, “I hope to avoid the many shortcomings of Pather Panchali which resulted partly from my own inexperience and partly from the manner of its making” (Robinson 72). The story has more of a Hollywood flow to it, a detail not lost on international film critics. 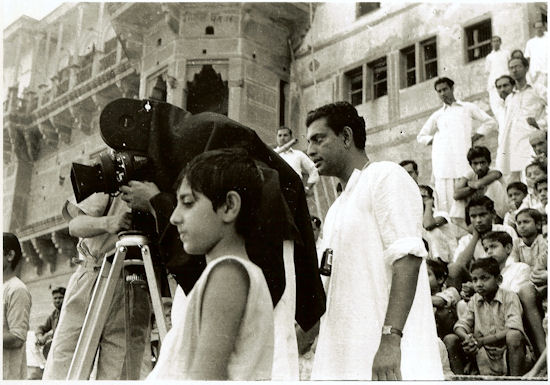 Ray filming on the Benares ghat by the River Ganga

For those of you who missed Pather Panchali, it’s the story of Apu, a small boy, his older sister and parents living in a rural Indian village. His father is a priest and a scholar, professions not valued in their hand to mouth existence. The father travels in an attempt to make a living, and while he is gone, Apu’s sister dies, and the ancestral home (a hovel, really) is destroyed by a monsoon. The family decides to move to a place where they hope for a better life.

Apu never leaves the village, although it is a whole world to him. In Aparajito, Apu is restless for new experiences and the film reflects his fascination with the dense variety of life in Benares, and later, Calcutta.“What elevates Aparajito—and all of Ray’s work—far above any suggestion of soap opera is the purity of his near-documentary approach, which is so unfussy and natural in its observation of human behavior that his films simply enter our bloodstream and become experience” (Wilhelm 16).

New actors were required to play the older Apu, and shooting in the holy city of Benares (Varanasi) was technically complicated. The setting was inspiring, but the angle of the light created challenges. Of the three films in the trilogy, Aparajito tends to be the least praised, some considering it a sophomore slump, if you will. But, it was the favorite of the three by Ray’s fellow Bengali art film directors, Ritwik Ghatak and Mrnial Sen. It made the least money at the box office, in spite of winning the Golden Lion at the Venice Film Festival in 1957. But, the characterizations are the deepest of the three films. Aparjito is about the closeness between a mother and her son. What parent cannot empathize with Apu’s mother’s sadness as he departs for his new life at college, barely looking back at her to bid farewell? 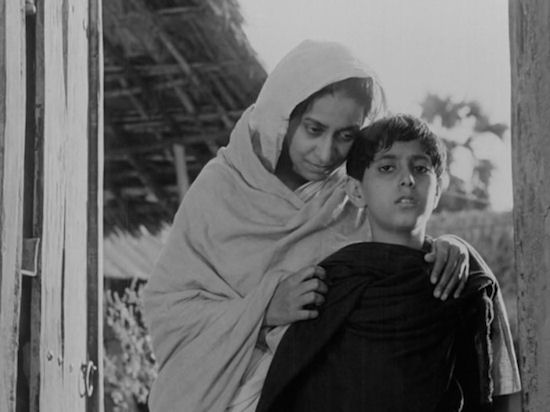 “One of the richest, most eloquent, most deeply moving of all cinematic portraits of the human condition…in its intimacy and specificity, The Apu Trilogy becomes utterly universal. The quiet delicacy of Ray’s assured vision is finally staggering in its larger implications and the series of small incidents we’ve lived through become emotionally overwhelming” (Wilhelm 305).