An Egyptian police band misses their bus on their way to an Arab Cultural Center concert and is stranded in an Israeli nowheresville. Warily dispersed amongst the townsfolk for the night, tentative friendships hint at political possibilities. The awkward friendship between sensual Ronit Elkabetz and shy bandmaster Sasson Gabai is unpredictable yet still exactly right. Winner of 35 international awards, including 8 Israeli Academy Awards for Best film, Director, Actor, Actress and Screenplay. “Stop the presses. This is the one to see”–New York Post.

The first feature film was produced in the land that is now Israel in 1932. Newsreels and other documentary looks at British Palestine dominated film production until dramatic film making was developed after the establishment of the state of Israel in 1948. They Were 10 in 1960 was the first Hebrew language film distributed internationally. The first fiction films in Israel were often “heroic dramas” depicting the courageous stories of Israel’s founding as well as incorporating a sense of loss, appropriate for a nation perpetually under siege. Sallah (1964) was the first Israeli film nominated for an Oscar, it was a parody of immigration bureaucracy, starring Topol, and occasionally other Israeli films have had this same honor. But few Israeli films have been seen by international audiences until relatively recently.

This is changing somewhat, in part due to the proliferation of Jewish Film Festivals nationwide, although still only a couple of Israeli films a year make it into general distribution. As the films improve their production values, and model themselves more on plot-driven Hollywood films, rather than the European Art House example, a few films have begun to creep into the mainstream. Beaufort was nominated for an Oscar in 2008, and Waltz with Bashir in 2009.

Since I’ve been screening both for the Full Frame Documentary Film Festival and for the Triangle Jewish Film Festival, I’ve probably seen 150 Israeli films, both fiction and non-fiction. Generally speaking, there are few of these films that would appeal to a mainstream audience. The political situation has created unbearable tensions throughout the society, and it is a country where every 18 year old is conscripted into the army. Other recent films reflect on the mixed feelings of those Israelis raised communally on the kibbutz. Although other countries make films dealing with the Holocaust, one event that seems to define Judaism in Europe and America, Israel, generally speaking, does not. They do not want to appear to trivialize or commercialize such a traumatic event, and at the same time, many first generation Israelis who were not survivors, criticized the victims, their parents’ generation, for being so passive in confronting their fate.

Arab populations and other minorities frequently appear in Israeli films, as might be expected. At first, characterizations were stereotyped as exotic, scenes of camels and donkeys backgrounded by Jewish stories, but since the 1980s, more of an effort has been made to fairly represent everyone living within the country’s borders.

This is writer director Evan Kolirin’s first feature film. He incorporated one of his childhood memories, that when he was growing up in Israel in the 1980s, Egyptian films were a major source of entertainment. There was only one tv channel, and programming was extremely limited, so Israelis sighed over romantic melodramas starring Omar Sharif and other Egyptian movie stars. After the films, there was sometimes a broadcast by a classical Arab orchestra, made of up Jews from Iraq and Egypt. So, there was an unusual cultural communication with a neighboring country with whom an edgy peace had been maintained. Satellite tv, as in many other parts of the world, has completely transformed the Israeli television landscape.

The Band’s Visit was eliminated from the Oscars competition because too much of its dialogue was in English. In the context of the film, it is the only language both Israelis and Egyptians can use to communicate, but there is a more practical reason, as well. With only a few million Hebrew-speaking people in the world, a film done partly in English can more easily secure international distribution, which was certainly the case, here.

But, Kolirin’s gentle message is a timely one, as all countries in the world seek to understand Arab populations. The director wishes to show not how peace can be achieved, but why Israel, and by extent all of us, should desire peace in our global village. I remain a firm advocate of international understanding through popular cinema. 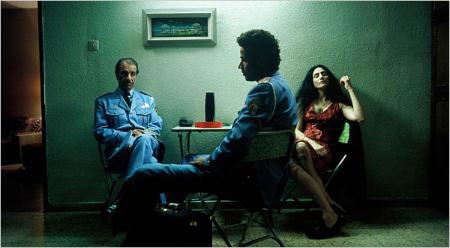 Sources include Israeli Film: A Reference Guide by Amy Kronish and Costel Safirman, World Cinema: Israel by Amy Kronish. Thanks also to Shai Ginsberg of Duke University for his insights.