What if James Bond was played by Hrithik Roshan, the sexiest man alive?  What if, as well as being adept with the quip and karate kick, he was also a thrilling dancer, and dearly loved his Mum and Dad?  Then, you would have the peerless escapism of the Bollywood action film, Bang Bang.  An international terrorist has commissioned a theft, the Kohinoor diamond, once looted to grace the crown of the Empress of India, Britain’s Queen Victoria.  Rajveer (Hrithik) has the gem, but is distracted by the lovely Harleen (Katrina Kaif) a bored bank receptionist waiting for a Truluvv.com date, and who is about to embark on an unexpected adventure.  There are spectacular chases (at least one too many) and copious carnage, and Harleen is a bit dimmer than she needs to be, but she’s a real character.  Bang Bang isn’t high art, but pop art, an exhilarating ride.

World cinema has been stealing from Hollywood since practically the beginning of the movies, and Bollywood has reimagined many American films. I’ve always wanted to program a series of international James Bond rip-offs from the Swinging 60s. I know they exist, although my world film knowledge doesn’t range wide enough to do it.  The Indianization of Hollywood films is fascinating and ongoing, and this one is an excellent example. Now, globalized companies, like Fox, have begun to formalize the arrangement.

Bang Bang is a riff on the Tom Cruise/Cameron Diaz Knight and Day from 2010.  The basic plot is a favorite of mine, innocent bystander becomes entangled with secret agent, detective, globetrotting criminal, etc.  The Man From UNCLE used to do this every week.  A school teacher on a class trip is the ONLY person who can help Napoleon and Illya save the world, etc.

I saw Bang Bang before the Tom Cruise/Cameron Diaz starrer Knight and Day and it was Moviediva, jr who said that there was a title card before the screening she saw in New York City acknowledging the source.  My theater in North Carolina omitted this slide, which apparently credited the original screenwriters. This credit is also not on the DVD release of the film. Also missing were the opening slides plugging brand partners, like Pizza Hut.  There are ludicrous Pizza Hut product placements throughout Bang Bang.  I’m willing to bet there is no stand alone, cliff side Pizza Hut restaurant in Deradhun, a cross plug obvious to the most naive moviegoer.

Incidents that I thought were purely Bollywood turn out to be direct steals from the Hollywood film, and plot devices that I thought a weakness of the sometimes chaotic Bollywood scriptwriting style turn out also to be plot holes in the source material.  How many times can a person be drugged and wake up not knowing where they are?  That is lazy scripting if I ever saw it.  Blame Knight and Day, not Bollywood. 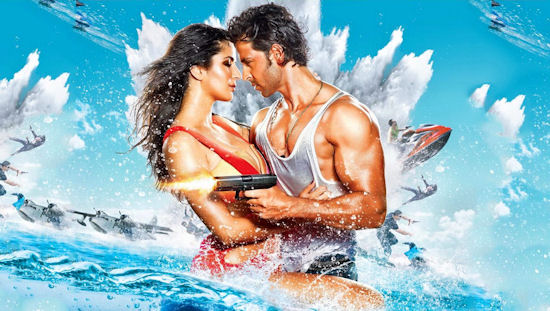 To begin with, the Macguffins which jump start the films are completely different.  The Hindi film uses a redress of Raj era abuses to jolt a terrorism plot, while the American film follows an imaginary item that could be a “perpetual energy machine” (as well as its inventor, played by Paul Dano).  There are numerous action sequences in each version, but most of them are completely different from each other, although some of the banter remains. Tom Cruise’s motivation is known by about a third of the way through Knight and Day, but the audience is kept guessing until practically the end in the Bollywood version, which is about twice as long as its counterpart.

Bang Bang begins with a shadowy figure casually tossing and catching the Kohinoor in the air.  Since that person has a double thumb, it can only be Hrithik Roshan, an actor’s whose physical beauty is accented by this oddity, considered lucky and so uncorrected by plastic surgery. A chance encounter sets both plots in motion, but the characterizations are tailored to each star’s persona.  Tom Cruise has a driven, type A kind of charm, he’s anxious and rabbity, never relaxed.  Hrithik’s manner is much looser, he’s much more willing to smile, and the camera lingers on his body, for visual pleasure, more like the way Diaz is ogled in a bikini, rather than Cruise in his board shorts .  Hrithik’s dancing skills play into his fighting skills, he has a longer line, as one would say of a ballerina, and appears to be doing more of his own stunting than Cruise (who’s older). The action sequences in the Bollywood film were directed by Andy Anderson, who did The Amazing Spiderman 2, so the quality is high.

One of the sequences, set on a paradisiacal desert island,  that seemed to me a direct homage to Hrithik’s breakthrough film, Kaho Na Pyaar Hai, turns out to have been lifted almost completely from Knight and Day (although there is another , more specific homage to KHPH in Bang Bang, near the end) and amazingly, we meet the parents of Cruise’s character, Roy Miller, which seems to be a direct homage to Bollywood’s devotion to the extended family.  Another major difference is that Diaz’s June intentionally betrays Roy to his enemies, and Harleen does not, trusting him to the end. 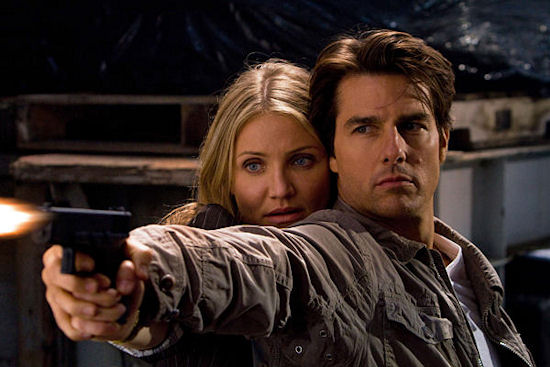 Cameron Diaz’s heroines are always rather tomboyish, June, in Knight and Day, wears her cowgirl boots, even with a bridesmaid’s dress. In Night and Day she is a garage owner, a rebuilder of 60s/70s muscle cars. Katrina Kaif, the leading lady of Bang Bang is not a physically small person.  Much taller and more solid than Diaz, her character is more fragile and naïve.  I thought Kaif did way too much shrieking, but it turns out Diaz does even more.  Diaz is more sexually aggressive, as well, Katrina is dumbfoundingly sexually innocent, although her robust fantasies about Rajveer take up a lot of the musical real estate of the film.

The villain, Omar Zafir, is played by Danny Denzongpa, who is himself a link to classic Bollywood action films of the 1970s.  An actor of Nepalese descent, his non-Indian looks suited him for all kinds of action film bad behavior during his long career. He has 195 credits, according to the imdb, dating back to 1971. His henchman, Hamid Gul, is Javed Jaffrey, often a comedy player, it’s fun to see him be evil here.

Needless to say, Knight and Day is not a musical (although the Kingsmen’s “Louie, Louie” figures in each). Bang Bang’s songs, by the peerless Vishal and Shekar, are driving and catchy.  Many of Hritihik films are directed by his father, with his uncle providing the music, and sweet songs often overload those scores.  Bang Bang’s title song, played over the end credits (and no doubt, endlessly on South Asian television channels) is loads of fun, with its homage to Michael Jackson.  But all the songs are good, and nobody looks better on the dance floor than Hrithik.

One huge problem with Fox being directly involved, and this is true as other Indian production companies partner with American studios, is that they have stopped subtitling the songs.  What’s up with that, people?  The lyrics are important, and luckily, I’ve taught myself enough Hindi to follow along (most of the time) and www.bollymeaning.com can fill in the gaps. The DVD release does subtitle the songs, so that has been remedied.

Yes, they are both loaded with action movie ridiculousness.  So many bullets, and the lead actors never get hit?  As my daughter points out, Rajveer clearly has a supply of hair products in each of his safe houses.  But, for some reason, Bang Bang’s craftsmen and women improve on the source material.  A lesson in cultural appropriation, alluring star personas and audience satisfaction.