Jess challenges her conservative Sikh parents by her cross-cultural romance—with soccer.  This coming-of-age story spotlights multi-cultural London, and is filled with wisecracks, bouncy music, indelible characters and early star making turns by Knightley, Rhys Meyers and Archie Panjabi. “You seldom leave a theater walking on air, much less float all through a movie. But the joyous Bend It Like Beckham never lets you down” (Washington Post).

Movies about teen girls are usually focused on one thing:  boys.  When my daughter was growing up, this drove her crazy—where is the Ferris Bueller for girls?  Even the much-praised Lady Bird forgot to include something that Lady Bird was actually interested in, other than having sex for the first time and dumping her plus size best friend for the popular mean girl that she thought would get her an entrée into teen society.  Two film critic colleagues chastised me almost simultaneously insisting: it’s understood that Lady Bird will grow up to be Greta Gerwig.  But, I say, that’s not understood.

Call Me By Your Name likewise is a coming-of-age story centered around relationships.  But Elio is also passionate about classical music, and he’s shown to be a gifted pianist.  This is a bit of character development Lady Bird is not allowed.

In Bend It Like Beckham, Jess has a passion:  soccer/football.  Everyone around her thinks she should be focused on boys, specifically the boys within her Punjabi Sikh culture in London.  But she defies them by defining herself on her own terms.  Football is the most popular sport in Britain, and this film, aimed clearly at mainstream audiences, is about both a British Anglo and a British Asian girl as they fight sexual stereotyping to play the sport they love. 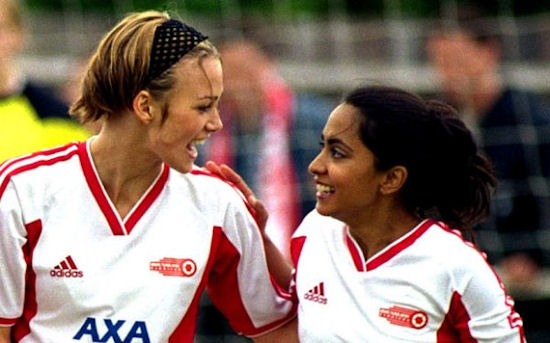 Director Gurinder Chadha was born in Kenya to Indian parents who moved to West London when she was two years old.   After University, she pursued documentary film making, and went from researcher to reporter to director.  The British Film Institute supported her making a short about bhangra music called “I’m British, But…” and then she made her first feature film, Bhaji on the Beach, about a group of British Asian housewives on a seaside outing.  She was the first British Asian woman to direct a feature film.  Hers is a classic immigration success story, she received an OBE from the Queen in 2006.

Although she said this film was inspired by the image of a black footballer wearing a Union Jack at an international match, her film is as autobiographical as Lady Bird.  It’s filmed in the neighborhood in which she grew up and reflects her ambivalence towards traditional cultures: Jess tries on Western clothes and attitudes, while shirking tasks like cooking for the family. All the music you hear on the soundtrack is from Chadha’s personal music collection.  Her father died before the film was completed, and Chadha told The Guardian ” It made me very impatient with people who throw life away. It was an epiphany. And I didn’t know this at the time, but when I was making Beckham, I was totally grieving. That’s why that film is so emotional and so raw, especially the scenes with the dad. It’s a film that was made in grief” (Mental Floss). 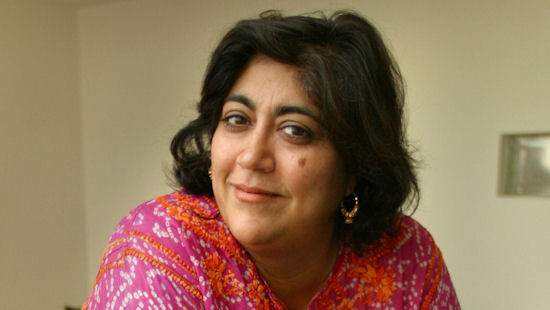 Her goal was to write the most commercial film possible with an Asian woman lead.  Football at the time was seen as the domain of hooligans, and an uncomfortable space for people of color.  She met with stage actress Parminder Nagra and said, “I’m thinking of doing this film about an Indian girl who plays soccer” and Nagra said, “Why would anybody want to watch that?” (EW).  Chadha didn’t know or particularly care anything about soccer, and her co-writers, her husband Paul Mayeda Berges and Guljit Bindra, supplied descriptions where Chadha wrote “jargon jargon football jargon” (Mental Floss).

“Bend It Like Beckham helps viewers better understand Jess’s masterpiece invention of a hybrid identity. She’s not just an Indian girl completely ignoring her roots, yet she’s also not resigning herself to a life dedicated to perfecting her appearance in preparation for marriage, cooking, and tidying up the house. To play soccer in the park with the boys and then secretly play for a team, while also trying to be a good Indian daughter, requires nonstop maneuvering… Bending the ball like Beckham is a metaphor for the way all girls accomplish their goals, not by the straight path, but feinting and curving around obstacles to reach our goals.  Finding a way to meld football and traditional culture gives her individuality and a cultural wholeness we all must face to one degree or another” (The Atlantic). 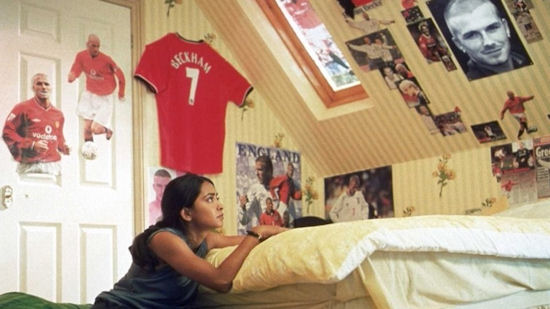 “I put them into three months solid football training, and they had a coach and every day they would come in and train,” Chadha told blackfilm.com. “They worked really hard at it. Keira, who plays Jules, got concussions a few times. Parminder really damaged her toes and was too scared to [kick] the ball in case she broke one. They really had to go through the pain barrier like other athletes in order to excel. It’s only when I said, ‘We could always use doubles, don’t worry about it,’ when the two of them said, ‘No way! We’re definitely going to go for it.’ And they did.” Coach Simon Clifford said by the end of the film the actresses could do some moves professional footballers could not and thought Knightley could have made an excellent soccer player, had she started her training earlier.  “I was captain of the girls’ team in primary school, but we never actually scored a goal.  We only kicked people” (Mental Floss).  Surrounding the two actresses, the fictional Hounslow Harriers were mostly professional players.

This was Knightley’s breakout role, one year later she made Love, Actually and Pirates of the Caribbean.  Parminder Nagra (who is eleven years older than Knightley!) is best known in the US for her role on ER. Jonathan Rhys Meyers, whose most high-profile role is as Henry VIII in The Tudors, thought the film was going to be terrible, and didn’t tell anyone he was in it until it became an international hit. Archie Panjabi, playing Jess’ sister, won an Emmy for her role as a detective on tv’s The Good Wife. 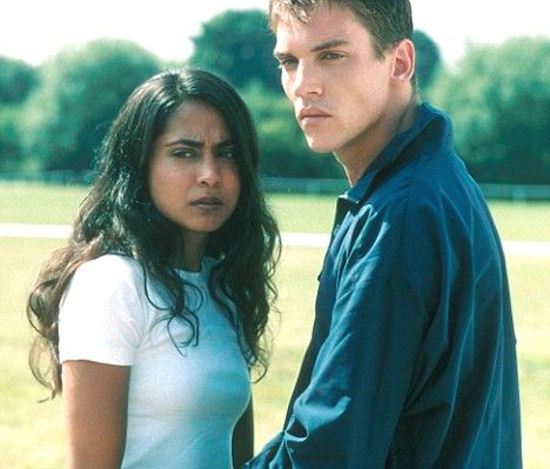 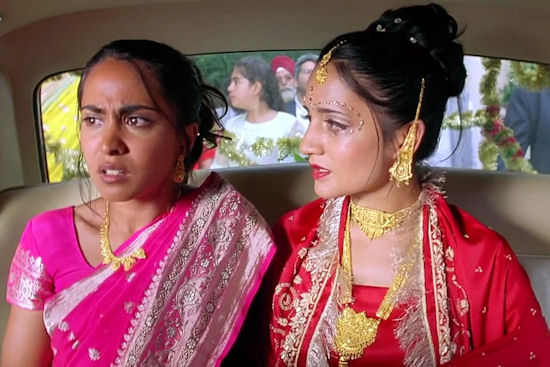 Playing her father is Anupam Kher, who has played the father in countless Bollywood films, and has 415 credits as an actor.  Among his many American projects is Kumail Nanjiani’s father in The Big Sick, where he once again counsels an unruly offspring trying to meld his parents’ culture with his immigrant identity. Zohra Sehgal, who plays Biji, has been acting since the 1940s, she’s in her late 80s in this film.

This film hit a moment both when women’s soccer was first being taken seriously, and when marketers decided that making female protagonists the center of tv and film stories, and new teen magazines, like Teen Vogue, were seeking to capitalize on a perceived new market.  Bend It Like Beckham was already a huge hit internationally before it played in the US, making it an art house “sure thing” crossing over to the mainstream.   In England, right before the film was released, David Beckham injured his foot, making it questionable whether he would play in the World Cup, and the press provided “Mend It Like Beckham” and “Break It Like Beckham” headlines which kept the film in the public eye. It was also right after 9/11, and the Sikh community wrote many letters to Chadha thanking her for giving a face to their beleaguered community. The film went on to gross over $76 million globally on a $6 million budget. It was a much bigger success at the box office than was expected, financed through the National Lottery and some money from a production company in Hamburg, Germany.

In a more recent interview “Chadha claims that Indian girls who play football now face less cultural opposition from their families, and unabashedly attributes this development to the film’s influence. It’s harder to pin her down to a progress report on the wider conflict between first-generation immigrants and their children. She insists that her story is essentially about teenage girls under pressure to conform” (Telegraph).

Part of the film’s success is that it is a British film, in which a British Anglo and a British Indian heroine are shown to have similar lives, they live and shop in the same neighborhoods, their houses are similar, both have conservative mothers obsessed with conventional femininity, and supportive fathers, the music, too, is both Asian and Western.  Chadha said, “I find the term ‘woman director’ too constricting, I find ‘Asian director’ too constricting.  But I have redefined what British means in my work, I’m comfortable with British, because I know British also includes me” (Korte and Sternberg 176). 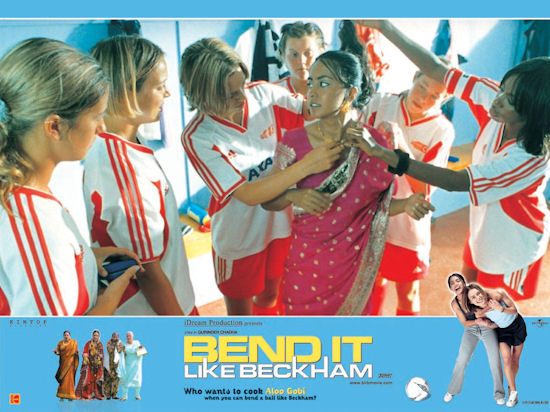