The Greek myth of Orpheus and Eurydice inspired this story of undying love between a street car conductor and a country girl. Set to the samba rhythms of Carnival in Rio de Janeiro, Brazil, this “riotously colorful tapestry of carnival tumult and excitement, of blazing costumes, of shimmering and enveloping purple darkness—and of blood pulsating music” still entrances modern film audiences (Janus Films Catalogue).

In the original story, Orpheus was given the gift of music by his mother, a Muse. His entrancing music was irresistible; only the Gods themselves played and sang more sweetly. Orpheus fell in love with Eurydice and they married, but their happiness was short-lived, for soon after the wedding, she was stung by a viper and died. Inconsolable, Orpheus decided to do what no mortal had ever done, journey to the underworld and plead with its ruler, Pluto, to release Eurydice from the land of the dead. Arriving in Hades, Orpheus told Pluto:

…I seek one who came to you too soon.
The bud was plucked before the flower bloomed.
I tried to bear my loss. I could not bear it.
Love was too strong a god… (Hamilton)

Melting Pluto’s heart, Orpheus was granted his request: Eurydice would be allowed to return to the world of the living, but only if Orpheus did not turn to see her until they had reached the upper world of mortals. Overwhelmed with a desire to gaze on the face of his beloved, he turned too soon, and she was lost to him forever.

The immediate source for the film Black Orpheus (Orfeu Négre) was a 1956 play, Orfeu da Conceiçao, by Brazilian playwright, poet, singer and diplomat Vinícius de Moraes. In 1942, Moraes had been host to film director Orson Welles when Welles visited the Carnival in Rio de Janeiro in order to film scenes for his abortive documentary project, It’s All True. Moraes had been reading an 18th century version of the Orpheus myth by an Italian author. Reading the play and hearing the sambas at the carnival ignited Moraes’ imagination. “Suddenly, I had the idea of making Orpheus a sambista characterized by great interior beauty.” His concept fused two intellectual movements: European primitivism, which lauded the creativity of non-Western cultures, and the Negritude movement, which valued the contributions of the African disapora. Moraes wanted his play to pay “homage to blacks for their organic contribution to the culture of this country and for their impassioned lifestyle” (Stam).

While Moraes’ play had followed the Greek myth closely, Camus’ film was a much looser adaptation. In the film, Orfeu (the character who represents Orpheus) is characterized as the sun god, and solar symbols recur throughout the film, beginning with the opening image of a boy flying a sun-shaped kite. Two little boys believe Orfeu makes the sun rise with his guitar playing, and the samba school, to which all the lead characters belong and with whom they dance during Carnival, reinforces these symbols with their mythological Carnival motifs. Eurydice has a zodiac scarf, the characters live on the side of a mountain as if they are on Mount Olympus, home of the Gods, and Greek names are used for some of the characters, such as the kindly messenger, Hermes.

Black Orpheus was shaped by six major influences. One was the popular trend of updating of classic texts to modern day milieus, as Eugene O’Neill did in Mourning Becomes Electra. The second was the continuing tradition of basing literature on the story of Orpheus, especially the first two films in a trilogy made in France on this theme by Jean Cocteau, Le Sang d’un Poet (1930) Orphée (1950). The third influence was the vogue for classic plays performed by all-black casts, for example, Orson Welles’ stage production, Voodoo Macbeth. Fourth was the French fascination for black culture, seen when cabaret artist Josephine Baker conquered 1920s Paris with her Revue Nègre. The fifth influence was the native Brazilian movement celebrating black African contributions to the culture. Finally, the film was clearly influenced by the popular all-black Hollywood musicals like Cabin in the Sky and Stormy Weather.

While Brazilian film historians consider Black Orpheus to be French, French film historians often consider the film to be Brazilian. Black Orpheus was made by a French director, Marcel Camus, who was a contemporary of New Wave directors like François Truffaut and Jean-Luc Godard, but not part of that revolutionary cinematic movement. But, the film was based on a Brazilian play, and features Brazilian actors, music, samba performers and technical crew. Only four members of the film crew were French. The main actors, mostly professionals from the Black Experimental Theater in Rio, were also Brazilian. Orfeu was played by Brazilian soccer star Bruno Mello and Eurydice by Pittsburgh dancer Marpessa Dawn, a member of the Katharine Dunham Dance Troupe.

At the same time that Black Orpheus was being enjoyed on the world stage, questions about the on-screen representation of Brazil were raised. Poverty was romanticized, with the squalid favelas (shanty towns) shown as picturesque neighborhoods, blessed with great views and colorful décor, filled with charming, carefree, sexually joyful people. Ivana Bentes disdained the unrealistic geography of the city and claimed the “imagined community constructed for foreign eyes” was a pretend Brazil: “an exuberant land” with “a humble, simple, but happy people.” Fernao Pessoa Ramos called the film a lesson in “how not to depict popular culture, noting the “humble posture, folkloric slant and mythical perspective typical of foreigners.” (both quotes in Nagib). The amount of work accomplished by the samba schools (sometimes described as the best organized institutions in Brazil) and the difficulty of the elaborate parading dance routines were glossed over. The macumba rite of the Afro-Brazilian Umbanda religion, described in contemporary accounts with the now discredited term, voodoo, was another cultural tradition plucked for its picturesque attributes. Moraes was outraged at what the filmmakers had done to his play, and walked out of the screening he attended, complaining, that Camus had “just made an exotic film about Brazil.”

To a certain extent, these complaints are valid. Black Orpheus is, in some ways, a French tourist’s view of Brazil, and lacks a Brazilian native’s discretion or understanding. Robert Stem comments, “Black Orpheus did for Rio’s favelas what West Side Story, made not long after, was about to do for the slums of New York (with the important difference that Black Orpheus did not ethnically cleanse the slums of black people).” But, of course, myths are myths, not documentaries! The Mount Olympus of the Greek Gods wasn’t real either. And, it is refreshing to see a classic, poetical romance with people of color. 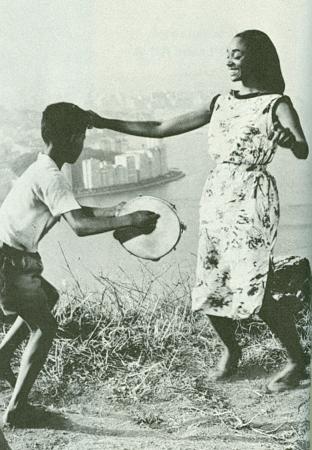 Black Orpheus was an immediate international sensation, winning the Palme d’Or at the Cannes Film Festival and the Best Foreign Film Oscar in 1959. Visually stunning and with an infectious score, Black Orpheus brought Brazil, blackness and Carnival into world consciousness. There were many reasons for this success. The theme of love that transcends death has been an enduring one, with examples as diverse as Romeo and Juliet, Tristan and Isold and Love Story. The images of spectacular beauty created by cinematographer Jean Bourgoin were dazzling. The sun as a symbol of death and rebirth is common in cultures worldwide. And, the film’s narrative is propelled by the driving drum rhythms and the electrifying energy of Carnival. Samba and Bossa Nova music became internationally popular, and the song “Manha de Carnival” by Antonio Carlos Jobim and Luis Bonfa was recorded more than 700 times. Jobim’s love for the cool jazz of musicians like Chet Baker as well as for early 20th century French composers like Claude Debussy blended in an intoxicating sound that remains both popular and appealing. These songs became among the most widely played in the history of world music.

Black Orpheus brought the Portuguese language, as well as Brazilian culture and music, to the world stage. It made Carnival the international symbol of Rio and it celebrated the blackness of Brazil, something Brazilian films themselves had often avoided. Perhaps it was the international success of this film which provoked indigenous filmmakers to take control of representations of Brazil in the “Cinema Novo” movement. Black Orpheus was recently remade (1999) by one of this movement’s pioneers, Carlos Diegues. The remake, Orfeu, followed Moraes’ play much more closely than the first film version, and even included modern versions of some of the music composed for the original play. The story was updated to a more sordid and realistic contemporary Brazilian milieu. The fact that such a recent film has already faded from view, while the classic Black Orpheus continues to enchant audiences, can be attributed both to the skill of the original filmmakers and the universality of Black Orpheus’ mythic setting. 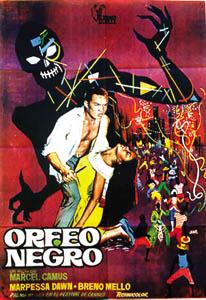