Anyone who knows me, knows I love silent films.  Visually sumptuous, a mysterious window into a long vanished time, they are full of beauty, emotion and drama.  I was practically vibrating with excitement when I first heard about The Artist, especially since it starred a favorite actor, Jean Dujardin from OSS 117: Cairo Nest of Spies.  But, I was doubly amazed that shortly afterwards this sumptuous film from Spain arrived on our shores.

Pablo Berger had been working on the script since 2005, but he could not find anyone who wanted to finance a silent, black and white film.  Released close in time to The Artist, and in the middle of a Snow White revival (Snow White and the Huntsman and Mirror, Mirror came out at almost the same time) critics were divided on whether the confluence of silent film technique and fairy tale subject helped or hurt the film.  A huge success in Spain and France, it had only a week long run in the Raleigh Durham Chapel Hill area, although it played somewhat longer in major cities.

Berger’s reimagining of the sinister Brothers Grimm fairy tale in the roaring, or in the case of el toro, snorting 1920s, was contemplated long before Michel Hazanavicius’s Oscar winning film was initiated, since Berger had to wait much longer for the financial support that would bring his project to fruition.  He was inspired by a book, Espana Oculta (Hidden Spain) by a photographer named Christiana Garcia Rodero.  The photographer worked on the book for 15 years, the black and white photos are considered the Spanish equivalent to Robert Frank’s The Americans.

Rodero included a number of pictures of bullfighting dwarves, in one they look out at the camera.  Berger wondered, “what if I put in the middle of this photo Snow White, dressed in a bullfighting outfit?” (Interview).  He was also inspired by one of his favorite films, Tod Browning’s Freaks, and a transporting experience he had at the San Sebastian film festival when he was a teenager.  At a screening of the realist silent masterpiece, Greed, directed by Erich von Stroheim with Carl Davis conducting his own score, he had “an ecstatic cinematic experience… It was, for me, the combination of that (Rodero) photo and Freaks with my obsession with silent cinema. I just kind of put it together in this cocktail shaker. It’s the sum of those ingredients” (Interview). 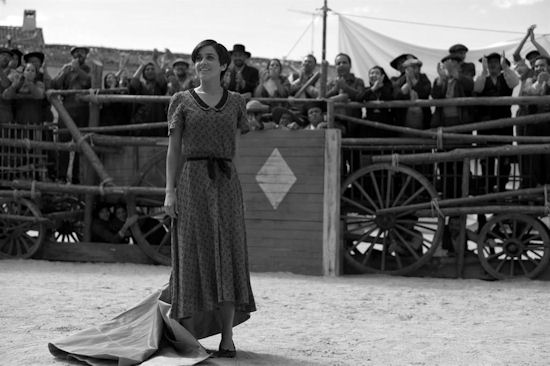 Although the dwarf matadors seem like a surrealist jape, there is a tradition of these performers entertaining the crowds as a prelude to the main bullfighting events.  These troupes are called charlotadas, named after Charlot, Charlie Chaplin’s nickname in France, and apparently Spain as well.  Supposedly these shows can still be seen in rural parts of Castille and Andalusia, where the crowd scenes were shot.  Spanish surrealist director Luis Buñuel also seems to hover over the proceedings.

Films about Spain often incorporate one of two stereotypical cultural ideas, one as the darkly sinister country of the Inquisition and the conquistador, and the other as the romantic haven of flamenco, bullfighting and gypsy passions. While we may view the film as a celebration of a glamorous Spain, Spanish viewers may see it as a critique of these traditions.

In the 1920s, a glamorous Spanish iconography was very popular, perpetuated by Hollywood films like Blood and Sand (starring Rudolph Valentino) and Mary Pickford’s Rosita.  Actresses often posed in elaborate lace mantillas with high combs in their hair and flamenco style dresses.  Embroidered Spanish shawls were worn both by senoritas and pianos.  Both Seville and Barcelona were the sites of international expositions in 1929 raising the international profile of Spanish style. 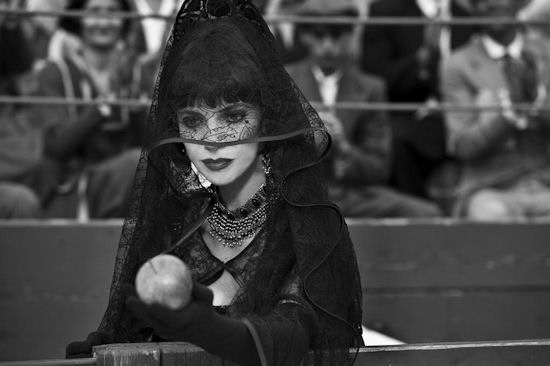 Blancanieves could not be shot in Seville;  the hacienda is located in a vineyard near Barcelona.  Bullfighting has been officially banned in Catalonia, and some of the bullfighting uses CGI effects. To Spaniards, the fact that the director is Basque, and the film takes place in Catalonia, is a daring way of incorporating classic Spanish stereotypes using more marginalized communities.

Four weeks before filming began, Berger still had not found either of the actresses, the child or the teen Blancanieves, and Berger was starting to panic.  He had seen thousands of girls, looking for a girl with the haunting face of Ana Torrent in The Spirit of the Beehive.  Finally, he asked a friend who was an acting teacher, and he recommended young Sofia Oria.  After her audition, no other actresses were considered for the child Snow White. The rooster, Pepe, was trained by the animal wrangler for several months, treated like a member of the family like a dog so he would respond on camera.

“Blancanieves exploits the silent medium for its strengths, including the fact that it can so easily deal with fantasy. This is as exciting, in many of the same ways, as the greatest traditional silent masterpieces by Dreyer, Pabst or Murnau. It’s a Spanish film, but of course silent films speak an international language” (Roger Ebert).

Director Pablo Berger attended NYU Film School on a scholarship from the Basque government, and received his MFA.  His first feature film, Torremolinos 73 is set in the 1970s, a comedy about a drab middle class couple who become adult film stars, so, quite a bit different than this movie. The composer, Alfonzo de Vilallonga also had an American education, at the Berklee School of Music in Boston, and has worked in the US as a musician, singer and stand-up comedian.  His score enriches Berger’s extravagant imagery.

The film won 10 Goya Awards (the Spanish equivalent to the Oscar) including for Best Film and Best Actress, and won 4 Gaudi awards, for best film in the Catalan language, and the Ariel Award in Latin America for the best Ibero-American film.  That it was shunned at the Oscars, its submission for best foreign language film ignored, is another sad example of Oscar’s irrelevance.

In his director’s statement he says in part, the film:
IS A JOURNEY THROUGH TIME: The film is a careful recreation of the unforgettable twenties in Spain: the wardrobe, the hats, the cars… No detail has been overlooked.
IS A GOTHIC MELODRAMA The film is true to the dark spirit of the popular tale from the Brothers Grimm. I use melodrama as a way of pushing the limits of characters in extreme situations. Keep your handkerchiefs handy.
IS A FAIRY TALE IN IMAGES The film captivates our inner child. The audience will feel like they’re sitting on my lap, being told a story full of fantasy, drama, horror and dark humor. Once upon a time… 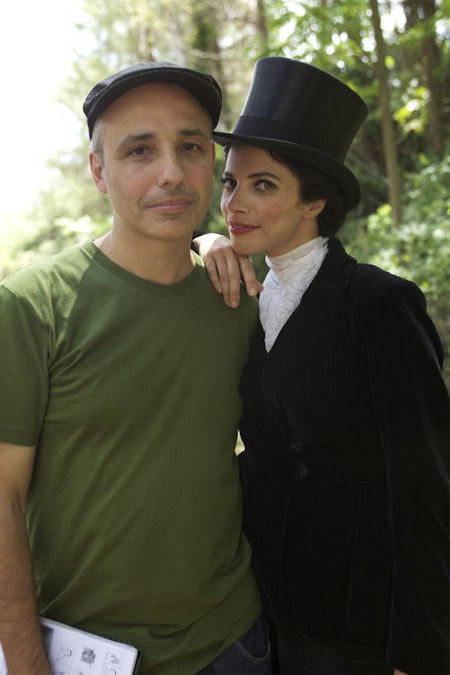