Bobby Bowfinger is a bottom-feeding producer with a sure-fire alien invasion script called “Chubby Rain” but no cash and no star.  Perhaps, if he follows action hero Kit Ramsey around town and films him secretly, he can conjure box office gold.  “Martin’s disciplined script — bitingly funny but tolerant, bemused rather than bitter — and the unfogged high beams he turns on everything…is dramatically energized by director Frank Oz” (Entertainment Weekly).

The Hollywood stories told the last two weeks at the NCMA have been about negotiating success in a big studio.  But there is the flip side of this particular American dream, the people who come to Hollywood, struggle and never quite make it.  This provides rich fodder for satire; I think particularly of Tim Burton’s Ed Wood, with Johnny Depp, and James Franco’s Tommy Wiseau in The Disaster Artist, as their muses compete for the title of Worst Filmmaker and Worst Film Ever Made.  Bowfinger is not a biopic, although it almost could be.  Written by and starring Steve Martin and directed by Frank Oz (a Muppeteer who plays Cookie Monster and Yoda in Star Wars but is also the expert comic director of In and Out and Dirty Rotten Scoundrels) it clearly mines a lifetime of experience in dealing with the dream factory’s underbelly.

The story had been percolating in Steve Martin’s mind for 15 years.  Martin said he was not thinking of Roger Corman or Ed Wood when he wrote his script.  “I was thinking of when I was nineteen years old and came to Hollywood and didn’t know what to do.  The moment in the movie that’s the closest to my actual experience is when Heather Graham gets off the bus and says, “Where do I go to be an actress?” And then she’s walking down a street and she sees a sign that says “Auditions.” That’s literally the way I lived for a long, long time.  Anything that said “show biz” on it, you were there.  Any persona who said, “Yeah I’m in the business,” they became your guru” (Kapsis). 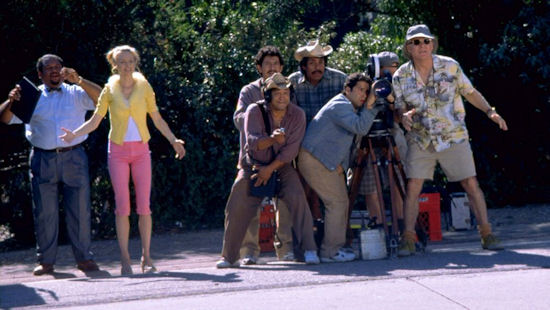 The director, Frank Oz, and Martin agreed that Bobby Bowfinger is not fighting the system, but himself.  Oz said, “He’s going up against his own incompetence.” Martin adds, “It’s the desperation, he uses his desperation.  I often think about people who are incredibly talented, but who are never in the right place at the right time.  I think about people who could have done what I did, if they’d just been there instead of me.  A lot of my own talent is cultivated; it’s cultivated through the opportunities I’ve given myself.  What’s what Bowfinger is about, –people who make their own opportunities.  When I was younger, I made my own opportunities as a standup comedian.  In high school, I created a variety show, so that I could be in it” (Kapsis) 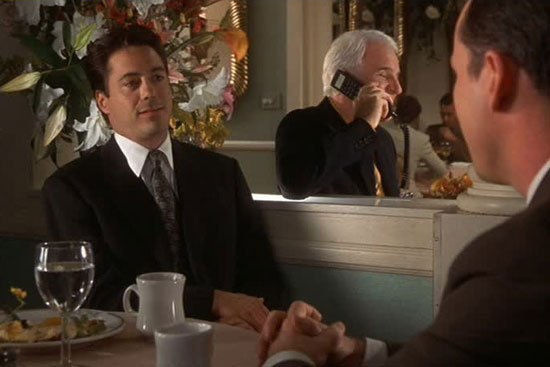 Martin says he gets really agitated if a single word is changed in one of his stage plays, but films are different, rewriting happens all the time. “If you have a great physical gag that’s backed up in some smart way—that’s the ideal.  It’s like Monty Python—intellectual and stupid at the same time” (Kapisi)

Steve Martin moved with his family to California when he was four years old.  He had youthful passions for magic and banjos, both of which he used in his early forays into show business at Disneyland, and Knott’s Berry Farm, which are hilariously recounted in his memoir, Born Standing Up.  He started writing for “The Smothers Brothers Comedy Hour” when he was 21 and won an Emmy.  He continued working as a comedy writer until his two comedy LPs ”Let’s Get Small” and “A Wild and Crazy Guy” hit it big in the 1970s.  I saw him in Cincinnati then…as you could see from the ticket stubs I turned up only this last week!   His career zoomed into the stratosphere when he appeared on Saturday Night Live. 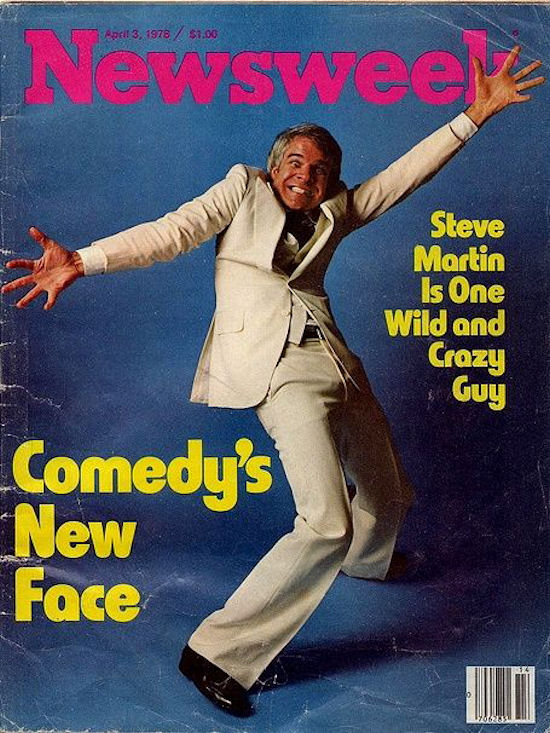 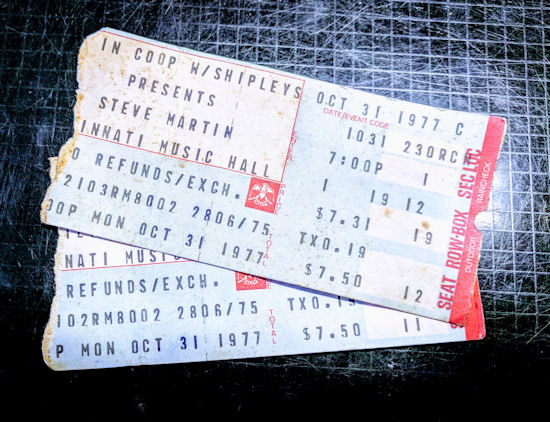 Eddie Murphy was born in Brooklyn and was much more interested in comedy than academics growing up.  He was a stand-up comedian and was only 19 years old when he first appeared on Saturday Night Live.  He made his film debut in 1982 in 48 Hours, but it was Beverly Hills Cop (1984) that made him an international celebrity.  His comedy career has had its ups and downs, as has his personal life.  Nowadays, some of his most high-profile roles are as a voice actor in animated films such as Mulan and Shrek. When Martin wrote the script, Kit Ramsey was more of a romantic leading man, but when Eddie Murphy was cast, Kit became an action star, riffing on his real career.

I’ve always had a soft spot for Steve Martin, because, unlike so many comedians, he doesn’t push the border into edgy sexual material, and he isn’t angry.  Not that comedians don’t have the right to be angry, but I don’t always want to hear it.  He’s creative, finding the funny without those crutches. I’m all in.
“I am proud of it, I really am. No matter what, I know I’ve listened to the audience. I double over in laughter at certain moments in the film, and I watched the heads in the audience go up and down with laughter. It’s just the greatest feeling in the world” (LA Times). 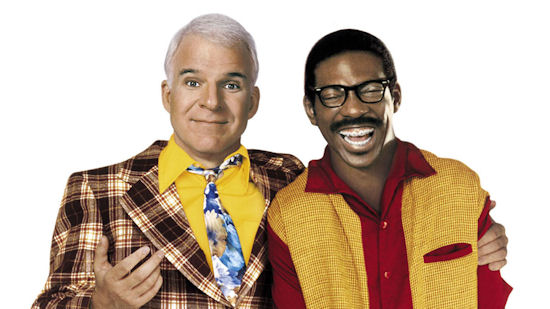