The Bride Wore Red is all about how nice girls don’t. Joan Crawford’s lust for a form-fitting, bugle beaded Adrian sheath (in shaded tones of red to make it even more figure revealing) seems greater than the lust she harbors for her two bland suitors, an aristocratic playboy (Robert Young) and an annoying philosophical postman (Franchot Tone).

Dorothy Arzner was assigned to direct Luise Rainer in The Girl from Trieste, an unperformed play by Ferenc Molnar. Molnar’s greatest fame today rests on Liliom, a play that became the basis for the Rogers and Hammerstein musical Carousel. After Irving Thalberg’s death in 1936, Louis B. Mayer’s tastes ruled MGM. He prefered sweetness and light, like the Andy Hardy movies, and Molnar’s play was rewritten. Retitled (by producer Joseph P. Mankiewicz) The Bride Wore Red, it was no longer about a prostitute trying to go straight and discovering the frailties of the respectable class to which she aspires, it was now a slightly sour Cinderella story with a tacked on happy ending. Luise Rainer withdrew and Joan Crawford was cast in her place. Arzner said in a 1976 New York Times interview that Rainer “had been suspended for marrying a Communist” (meaning playwright Clifford Odets). But, Rainer was a somewhat unenthusiastic film star and perhaps the roles she was offered did not inspire her. At any rate, Crawford was now Anni.

A slumming aristocrat (George Zucco) bets a friend that a new wardrobe and two weeks at a ritzy resort would make “cabaret singer” Anni indistinguishable from the swells, much as Henry Higgins and Col. Pickering make a wager over Eliza Dolittle’s fate in Pygmalion (and My Fair Lady). “Have her properly washed, dressed and coiffured, and you wouldn’t be able to tell her from your fiancee.” Billie Burke, one of Arzner’s favorite actresses, isn’t so easily taken in. Usually typecast as a dithering comedienne (and famous as Glinda the Good Witch) Arzner used her to great effect as a wronged wife in Christopher Strong and here as an acid-tongued Contessa. 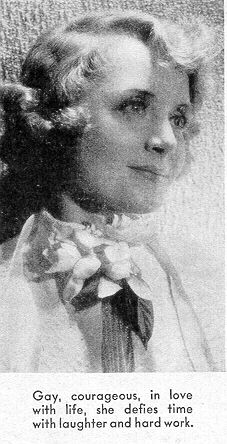 Dorothy Arzner was the only female director in Hollywood to make the transition from silent to sound pictures. In the silent era there were numerous women directors before the studio system became institutionalized, and men realized that there was a lot of money to be made in the movies. These studios were ruled autocratically by men with strong egos and strong opinions, no one more so than MGM’s Mayer. Arzner was tolerated and condescended to as a “woman director” and a “woman’s director” as long as her pictures were profitable and no longer. The 17 features she made between 1927 and 1943 were rediscovered and honored by a generation of 1970s feminists hungering for role models in the “classical Hollywood cinema” era. If only her movies had a genuine auteur stamp!

She directed Clara Bow’s first talkie, The Wild Party and Christopher Strong with Katharine Hepburn, a film ostensibly about a daring aviatrix but really about a woman sacrificing herself for love. Arzner helped to elevate MGM contract player Rosalind Russell to stardom in Craig’s Wife, a well- received film version of a hit play about a repressed, obsessive housewife. She was brought in to finish Joan Crawford’s The Last of Mrs. Cheyney after the director died, and Arzner then replaced the replacement. Perhaps, The Bride Wore Red was originally meant to be light and amusing, but Crawford’s grim determination takes off the mocking edge. Even her clinging, beaded Adrian gown of the title couldn’t redeem the plodding pace, and shortly afterwards, Crawford was labeled “box-office poison.” Arzner made two other films, including Dance, Girl, Dance, much admired by feminist film scholars hoping for that definite directorial statement (1940) and then retired from the screen. She had clashed with the autocratic Louis B. Mayer, “I refused to do the next two or three scripts and I was suspended. Mayer put out the word that I was difficult, and you know how producers talk to each other. I think that was the reason I left.” Her career as a “girl director” was over.

Arzner’s films dealt with women’s lives, and particularly female friendships, with an intensity not often found in films directed by men. Arzner’s masculine appearance and dress were much remarked upon in contemporary interviews and articles. Her “garconne” look of tailored suits, short hair and no make-up was in vogue in the 1920s when she adopted it, but she never altered her personal style. She lived openly with her partner, choreographer Marion Morgan, from 1930 until Morgan’s death 41years later. Arzner died in 1979. 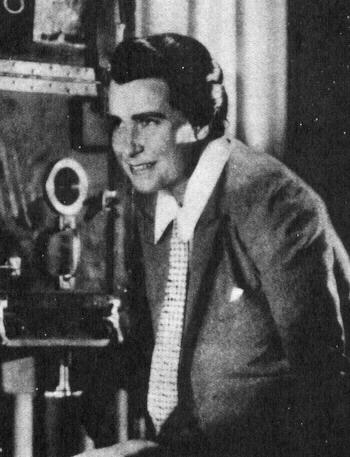 Joan Crawford was married to Franchot Tone when she made The Bride Wore Red; this was the last of the 7 films they would make together. The marriage was coming apart, fueled by his drinking and philandering, a series of miscarriages and her anxiety about her declining career. Crawford had been looking forward to working with Dorothy Arzner, but by the end of the film, their relationship was chilly, echoing Hepburn’s experience on Christopher Strong. Arzner’s touch seems evident primarily in Anni’s warm relationship with her cabaret crony Maria, now breathing wholesome mountain air as a maid in the hotel where Anni has landed. The city/country, civilization/nature contrast is evident in their friendship as well as in Anni’s beaux. 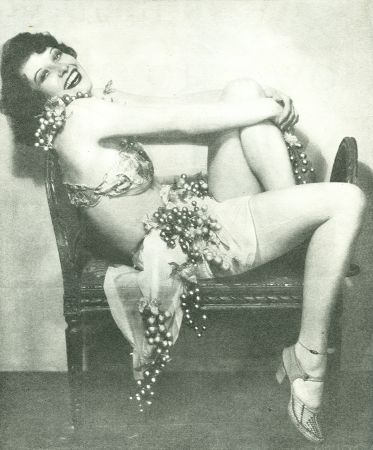 Crawford in a costume from earlier days: “…in a half yard of chiffon and a few bunches of grapes. Before Prohibition, this would have been a Bacchante costume. But, to conform with the law, Joan wears synthetic grapes. Joan can invent more ways to have her photograph taken than any other girl in Hollywood.”

Howard Gutner, in Gowns by Adrian describes Joan Crawford’s signature red dress as weighed down with two million, or 30 pounds of bugle beads. He seems a bit confused by the technique (not being a dressmaker himself) saying, “Ten seamstresses worked for two weeks merely to bead the material, which was then hand crocheted on crepe romaine.” It seems far more likely that the beads were applied to the dress fabric in the couture fashion, using a needle in a wooden handle (not a crochet hook) to anchor each individual bead with a chain-stitch onto the pre-marked gown fabric. Arzner had Crawford rehearse in the light cotton fitting muslin, to conserve her strength for filming. 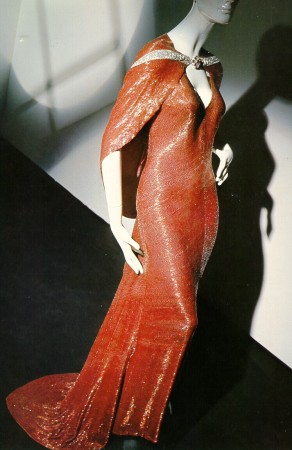 This dress makes a cameo appearance in the Marx Brothers film, The Big Store (1941). Groucho escorts a model in Crawford’s gown during a brief fashion show. “This is a bright red dress,” he explains helpfully, “but Technicolor is sooooooooo expensive.”

The Bride Wore Red is a film about clothes as well as fresh air. Anni has done pretty well, purchasing a chic wardrobe (on Zucco’s credit) that will help her fit in the Tyrol. But Janine Basinger reminds us, hanging in her closet is “the telltale outfit that will give her away: a red, shiny dress thatbrands her as being from another class, another place, as having another set of values, and it is suggested, too much sexual experience.”

(Publicity photo for The Bride Wore Red from Claire Drazin’s movie star scrapbook, photo of Billie Burke from “Facination After Fifty” Liberty magazine, September 3, 1938, a few pages earlier in the same scrapbook, photo of Dorothy Arzner originally in a 1932 Photoplay, reprinted in The Talkies by Richard Griffith, 1971, photo of red dress from Hollywood Costume: Glamour, Glitter, Romance! by Dale McConathy and Diana Vreeland, bunch of grapes costume from the July, 1928 Photoplay magazine)