Traumatized after a horrific car accident, a young woman climbs dripping out of a river and finds herself detached from reality and haunted by specters.  Drawn to a creepy amusement park, she discovers her fate.  Famously shot on the cheap by industrial auteur Harvey, this atmospheric B picture continues to inspire filmmakers with the director’s intention to have “the look of a Bergman and the feel of a Cocteau,” The Blood of a Poet merged with Wild Strawberries.

Director Herk Harvey was a Kansas University theater major.  After graduating, he worked for 35 years at Centron Corporation, in Lawrence, Kansas, an educational and industrial film house, and later returned to KU to teach.  He was annoyed when asked why this was his only film.  He made hundreds of movies, plentiful on www.archive.org if you want to watch them.  He was a skilled director, and the convincing drag race accident that begins the film is reminiscent of his drivers’ ed films, meant to scare would-be drivers straight.  Because of his extensive filmmaking experience, he was able to create effects where both the main character and the viewer question reality, “How much of your reality unfolds solely within the confines of our own imaginations” (criterion.com 4143).

Driving back from shooting a California industrial film for Centron, he happened upon the deserted resort of Saltair, a Mormon-owned amusement park, dance pavilion and midway. First built in 1893, in partnership with a railroad, trains would leave Salt Lake City every 45 minutes to take families to this pleasure palace by the Great Salt Lake. Rebuilt in 1925, even with what was the largest dance floor at the time, both because the lake was receeding and other, more modern amusements had taken the place of a day at Saltair. The buildings lay in ruins after several fires.  “Well, with the sun setting and with the lake in the background, this was the weirdest-looking place I’d ever seen!  I stopped the car and walked about a half or three quarters of a mile to the place, and it was spooky indeed.  And I thought, ‘Gee what a tremendous location’—because it’s completely isolated from everything and everybody, and at that time it was completely defunct” (Weaver 128). 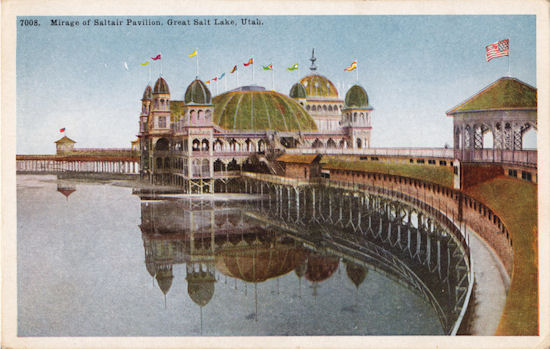 Haunted by the abandoned pleasure park, he asked his writing partner, John Clifford, to write a story using Saltair as inspiration, with the stipulation there must be a “dance macabre” in the abandoned ballroom.  Clifford wrote the film in a few weeks.  Harvey took vacation time and used a Centron crew of six to make his fiction film.  It was filmed in three weeks and cost $30,000, some of it cash raised from local businessmen.  They shot on the fly, asking a Salt Lake City department store if they could shoot some scenes when they were already there, the Victorian mansion used as the rooming house was vacant, so they rented it for a week. He discovered an old electrician from the resort’s heyday, and hired him to re-electrify the dance pavilion for the climactic scene:  all of the decorations you see were left from the days when Saltair’s glory days.  Because the distributor took the money and ran, in spite of the film’s success, there was not much of a financial return for Harvey. 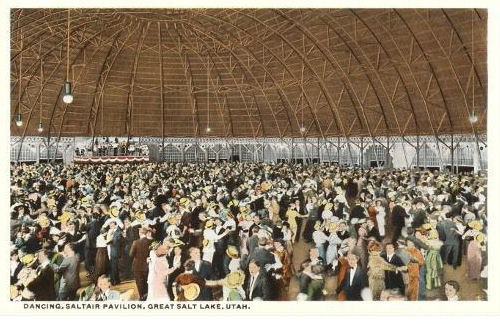 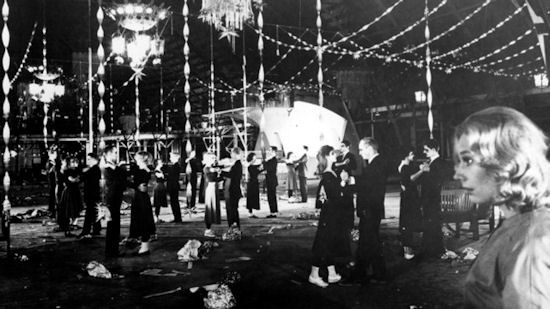 The car crash at the beginning of the film was a challenge, because he had not filmed very many action scenes.  There were no stunt performers, of course.  The bridge crossed a border between two states, but they managed to get permission from both, if they promised to fish the crashed car out of the water and pay for damage to the bridge, for which the production company was billed $12.00.

Candace Hilligoss was a New York method actress hired to give the low budget proceedings some seriousness.  Harvey was pleased with her work, in spite of her requests for “motivation.”  Harvey visualized her as a person who hadn’t really lived, and that’s why she rejects death.  He wanted her to be passive, as if she was sleepwalking through her own life, which Hilligoss found to be a challenge in creating her character. 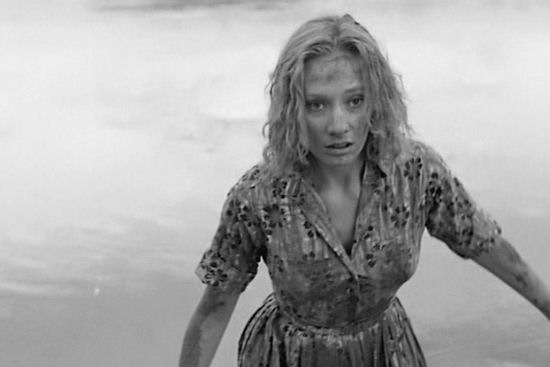 The heroine would be a church organist because Harvey knew of an organ manufacturing company that would make a spectacular location, and making a lost soul a church organist, especially in religion-soaked Salt Lake City, strikes a pleasingly discordant note.  “I decided early on to give the heroine no real sympathy or understanding from any other character,” said Clifford in an interview with film historian Tom Weaver in 1996. “So, for the viewer, there’s no relief from her dilemma. There’s no catharsis, even, except what the viewer creates for himself” (criterion.com 4143).

Mary is haunted by her inability to grasp reality, as her consciousness swerves in and out of focus.   But she is hounded by awful men, who refused to listen to her or see her as she is, even as they pretend to do so; a mansplaining doctor, and unsympathetic priest, the driver who lies about her automobile accident, and her rooming house neighbor, much creepier in his constant threat of assault than any ghoul.  They are the true horrorof Carnival of Souls, because they are all too real, the men who won’t take ‘no” for an answer.  Some men writing about the film even call her neighbor “flirtatious”and fault Mary for being “cold.”  These are the monsters women encounter every day. 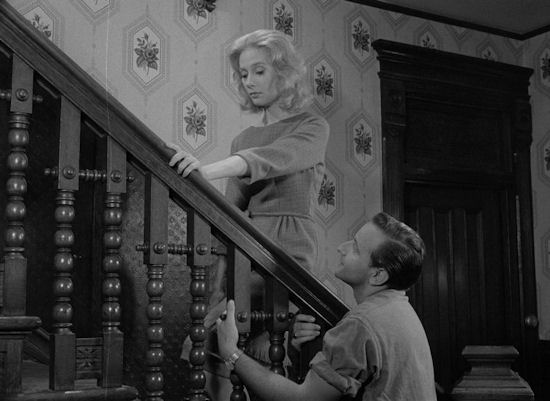 Carnival of Souls inspired director David Lynch, and there is an odd connection, Lynch’s favorite composer, Angelo Badalamenti was once the song-writing partner of the writer of Carnival of Souls, John Clifford.  Together they wrote hits for jazz icons like Nina Simone and Della Reese.

It was also a huge influence on George Romero’s Night of the Living Dead, even down to the make-up and clutching hands of the zombies.  Harvey himself played Carnival of Souls head ghoul, partly because of “Economics! Also the fact that there were no lines, and I didn’t have to memorize anything.  We had to go fast and furious, and in playing the ghoul, I had nothing to do except to stand around” (Weaver 134).  He didn’t take a screen credit, since producing, directing and starring too seemed a bit much.

Harvey was asked what his idea was in making the film.  “It was an exercise in weirdness.  Some of the ‘deeper’ meanings in there, like the call of death and that sort of thing, John Clifford and I intended, but a lot of the things that have been read into it have happened because of audiences” (Weaver 137).  He was so pleased, that in spite of the fact that they never really made money from it, that they took a chance and gave feature filmmaking a shot.  “Carnival of Souls was certainly an enjoyable experience” (Weaver 140).

“Reporters have asked why Carnival of Souls is still recirculating, playing theaters 30 years after it was made—when hundreds of other low-budget black-and-white films have been long forgotten. All I know is that the movie was created, directed, filmed and edited by people who loved the idea of making a picture—not to exploit anything or fit into any special niche, but just to make the best film they could with the limited resources available to them” (Criterion.com77). 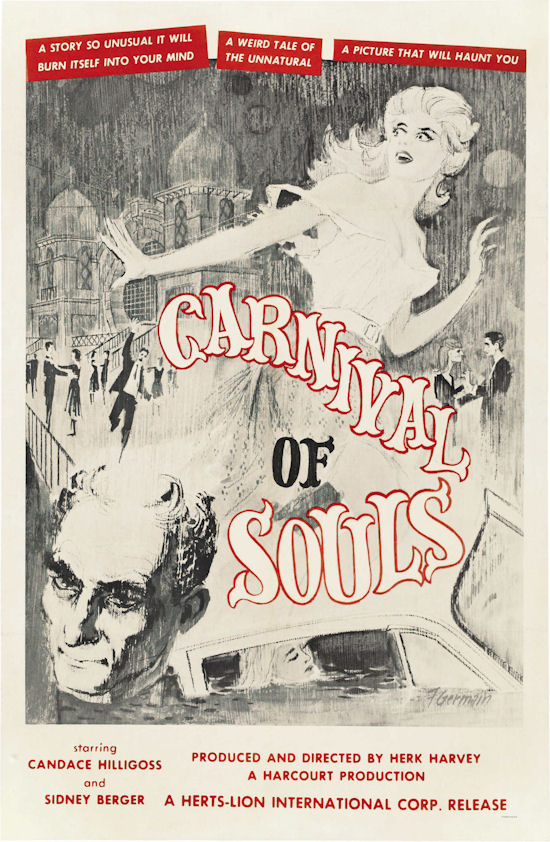