One day at a shabby car wash, as hourly workers dream, scheme and cleanse, and where George Carlin, Richard Pryor or the Pointer Sisters might drop in.  Groovy 70s threads and pulsing funk classics add to the fun.  “Held together by the music, which is nearly wall-to-wall, and by the picture’s tremendous sense of life…a wash-and-wax “MASH.” (Roger Ebert).

As we veer away from fast cars in our Car Crazy series, we’ll spruce up our vehicle by visiting a car wash. One hugely appealing aspect of this film is something that we rarely see in the movies, people working. How often does an actor sit at a desk and another character says of him (or her) s/he’s an architect or whatever…but we never see them doing their jobs. Here is a movie that appeals directly to the working person.

“An imaginative get-down-and-boogie-movie” (Ebony) the PG rated Car Wash was a way of folding younger audiences into the Blaxploitation cycle, whose films heavy were heavy on Black Power politics as well as sex and violence since they were aimed at older audiences.  The film eventually grossed $14 million (on a budget of $2 million) which amazed the studio that had not wanted to book the film in “white” theaters, in spite of the presence of popular white comedians like George Carlin and Professor Irwin Corey.

The financial success of films like Uptown Saturday Night and Let’s Do It encouraged studios to continue to produce black comedies.  In Car Wash, Franklyn Adjaye and Antonio Fargas handled the lighter moments, with Ivan Dixon and Bill Duke representing the serious social issues in the plot.  The comic appearances of Richard Pryor, George Carlin and Professor Irwin Corey created the atmosphere of a variety show, with distinct breaks for comedy and music in the plot, helping its appeal to a mainstream, meaning integrated, audience.  By the time Car Wash was released, the Blaxploitation era of films aimed at urban audiences was waning, and films with African American casts needed crossover appeal.  The eccentric characters and infectious Grammy winning sound track by Rose Royce, produced by Norman Whitfield, with Gwen Dickey as lead vocalist, helped propel this comedy to its success.

Director Michael Schultz was black, his German name was from a plantation owner who willed his 4,000 acre Kentucky plantation to his foreman, instead of his own relatives, and George Schultz took his former master’s name as a tribute, according to a 1978 Ebony magazine article, which you may or may not accept at face value.

Schultz wanted to be a director at a time few blacks aspired to the job.  At Marquette University he worked tirelessly in the theater department. His mentor there, Father John J. Walsh said he had “a very strong theater ethic in terms of: You as a theater person have the ears of a lot of people, and rather than be in it for glory of self-gratification, you have a great responsibility to uplift the audience, not only entertain them, to get people to see some things about themselves or about other people that they never thought about, to investigate or re-investigate the human condition so that when they come out of the theater, they have more knowledge and understanding than when they went in.  And hopefully they had a good time while they were being educated, or they won’t come back” (Ebony).

Schultz directed for the Negro Ensemble Company and continued on to Broadway. He won Obie, Tony and New York Drama Critics Awards, and was Tony nominated for his director of Al Pacino in “Does a Tiger Wear a Necktie” for which Pacino won a Tony. Schultz’s wife, Gloria, (then using the name Lauren Jones) was also nominated for a Tony in the play.  He made his television debut with the PBS classic of Lorrraine Hansbury’s  To Be Young, Gifted and Black and also directed Ceremonies in Dark Old Men and episodic television, including The Rockford Files.  Baretta and Starsky and Hutch.

Schultz was the major black director of Hollywood films between 1964 and 1985.  He directed the hugely successful Cooley High, which was intended to be an African American version of American Graffiti, examining the dreams of black high school seniors and using soul music as a background.  Looking at the life of black teens without caricaturing them was an unusual window into the lives of black youth that was revolutionary in its showing of the commonality between black teenagers and the white teenagers of George Lucas’ film.  Cooley High inspired two tv sitcoms, What’s Happening? and Welcome Back, Kotter, both of which had huge cultural resonances.  Cooley High was even shown at the Cannes Film Festival.

The success of Cooley High set the stage for Car Wash.  Joel Schumacher, who also wrote Sparkle and The Wiz, both of which starred Diana Ross, was the screenwriter. He later became a director, his films include St. Elmo’s Fire, Batman Forever and Phantom of the Opera. His script follows thirty characters with overlapping storylines, much in the spirit of a Robert Altman film.  It “reveals the dreamers, schemers and inbetweeners in a film that possesses opposing attributes: energetic but monotonous; fresh characterizations but yet stereotypes; and broad slapstick but poignant moments” (Donalson 81).  Marketed as a lighthearted comedy film, it also squarely faces the exploitation of the working poor. 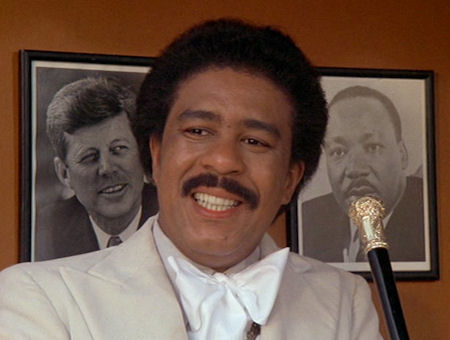 Richard Pryor starred in Schultz’s next two films as well, Greased Lightning, about the first black stock car racing champion, and Which Way Is Up? an adaptation of Lina Wertmuller’s The Seduction of Mimi.  He almost directed Grease prevented from doing so by schedule conflicts with Which Way is Up? Schultz’s next film was a disaster. Sgt Pepper’s Lonely Hearts Club Band, based on the music of the Beatles but starring the Bee Gees, Peter Frampton and George Burns was the most expensive film ever entrusted to an African American director. It tanked and his film career lost momentum. He had been involved with the creative concepts of the film, which was saturated with Beatles music from the album. Perhaps the studios were impressed by his use of music in his first two features, and hoped that his success at getting Richard Pryor to escape his stand-up comedy roots would also work for rock stars with limited acting ability in Sgt. Pepper. Audiences strongly disagreed.

Schultz has worked steadily both in films (Krush Groove, The Last Dragon) and in tv, directing episodes of many shows including The O.C., Gilmore Girls, Brothers and Sisters, Chuck, Drop Dead Diva, and Arrow. Although his feature film career would never reach the heights it did in the 1970s, he paved the way for many later African American directors like Spike Lee.

Franklin Ajaye, of the magnificent Afro plays T.C. He was a stand-up comic with a track record of appearances on mainstream entertainment shows like those hosted by Johnny Carson and David Letterman, as well as Soul Train.  He was a writer on In Living Color, Roc and NYPD Blue in the 1990s.  His most recent credit is as Maya Rudolph’s father in Bridesmaids. George Carlin, the cabdriver, was at the peak of his career, with top selling comedy albums and a regular berth on the Carson show. Garrett Morris was in the original cast of Saturday Night Live. Richard Pryor was the most famous African American comedian of his day. His appearance as Daddy Rich, a pimped-out preacher, accompanied by the Pointer Sisters is the most electric sequence in the film.  Dressed in their Swing Era glamour finery, the Pointer Sisters were famous for their pop hits like “Yes We Can Can” from 1973.  Their song “You Gotta Believe” is one of the soundtrack highlights.

Antonio Fargas also trained at the Negro Ensemble Company. He began his career as a teenager in 1964’s The Cool World.  He was in many of the most famous films of the Blaxploitation cycle, including Shaft, Cleopatra Jones and Foxy Brown.  His translation of the cool street hustler to the small screen, as Huggy Bear on Starsky and Hutch (1975-79) made him a familiar face in 1970s tv, and he appeared for years on All My Children, as well as guest starring on many, many films and tv series.

Ivan Dixon was a serious actor who had gained household fame as a regular on Hogan’s Heroes, in which his calm and capable character represented the African American GI in WW II. He had appeared in mainstream American films like A Raisin in the Sun, Patch of Blue and Porgy and Bess, and his starring role in Nothing But a Man (1964) is considered one of the groundbreaking depictions of black life in the Civil Rights era. He was nominated for an Emmy for his role in the tv movie, The Final War of Ollie Winter.  He directed series tv, as well as feature films during the 70s including Trouble Man and The Spook Who Sat By the Door.

Bill Duke, who plays the politicized Duane, who wants to be called Abdullah, was also a writer and director.  He appeared in mainstream films like American Gigolo, The Predator and Menace II Society.  He began his directing career with the nighttime soap Knot’s Landing in 1979, and directed top tv shows like Cagney and Lacey, Hill Street Blues and Miami Vice, as well as theatrical films.

Clarence Muse, born in 1889, and whose career dates back to the silent era represents earlier generations of African American actors.  He appeared in many films over his 50-year career, including films as varied as Hitchcock’s Shadow of a Doubt, Billy Wilder’s Double Indemnity and Fritz Lang’s Scarlet Street. 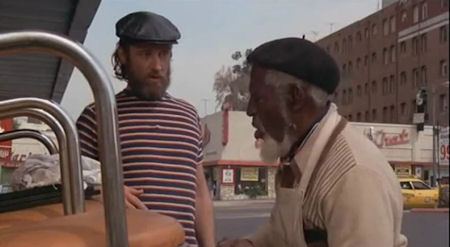 Watching the film with the audience at the North Carolina Museum of Art proved that the comedy still plays well to a crowd. The similarities with Robert Altman’s M.A.S.H. are really accentuated on the big screen, as the day long radio broadcast underscores the action.

Schultz was well aware of his trail blazing in Hollywood.  “I am constantly trying to impress upon the studios the fact that you don’t make popular movies by setting out to make a movie that will appeal to some mythical audience.  You make a movie that speaks directly to the human experience” (Ebony).  Or, as my friend Nancy said, when I said something similar,  “Oh, really?  It just made me want to work in a car wash.” 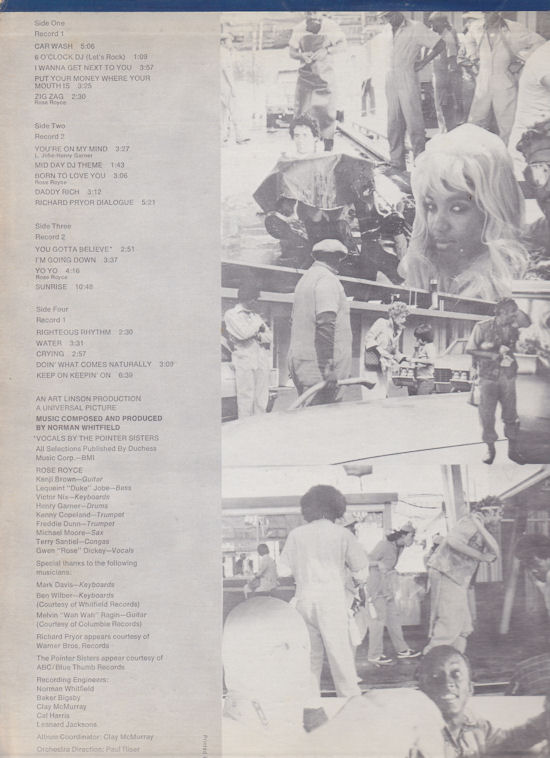 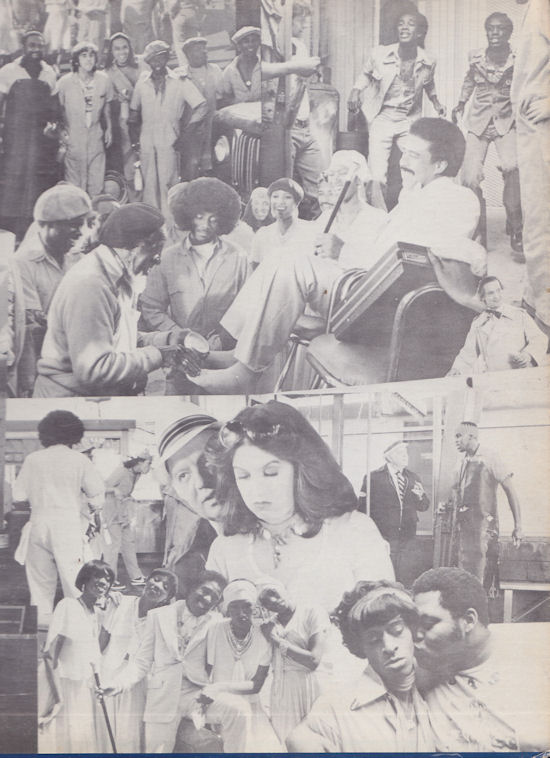 The soundtrack was a double album including Richard Pryor’s dialogue as Daddy Rich. Thanks to Craig Lindsey for his generous gift of vinyl!

Sources include: The Notorious Phd’s Guide to the Superfly 70s by Todd Boyd, “Michael Schultz: A Rising Star Behind the Camera” by Louis Robinson. Ebony Magazine September 1978. Redefining Back Film by Mark A. Reid, Black Directors in Hollywood by Melvin Donalson.