The stage play Chicago, written by 30 year old Chicago Tribune newshound Maurine Watkins, debuted to great acclaim in 1926. A smash hit in its day, a silent film version was shot the following year, and then remade in 1942 starring Ginger Rogers as Roxie Hart, although the tale was extremely sanitized by censorship of the Production Code. It predates that other great newspaper comedy, The Front Page by Ben Hecht and Charles McArthur, so Chicago is the original indictment of the tabloid press. Although Watkins’ fame has waned—Chicago is her best known work—she refused to sell the rights to allow Bob Fosse and Gwen Verdon to make her play into a musical, permission was granted only after her death in 1969. Although overshadowed at its Broadway debut by A Chorus Line, the original production, closely linked with Fosse’s distinct choreographic style, ran almost two years from 1975-1977. Revived in 1996, it holds a record for the longest running musical revival, beginning in 1996 and still running in 2020. The film version starring Renee Zellweger, Catharine Zeta Jones, Richard Gere and John C. Reilly won the 2002 Best Picture Oscar. 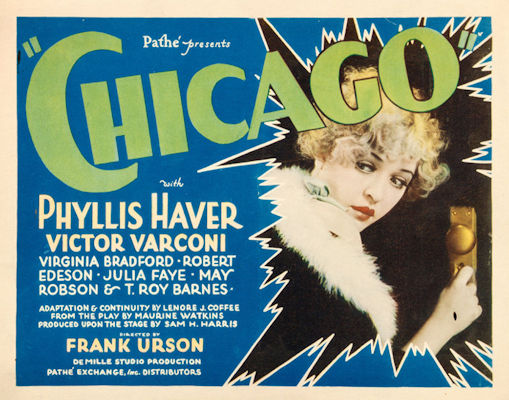 Chicago celebrates the previous great era of sensationalized crime, the 1920s. “Watkins’ play offers a bracing reminder that lurid crimes were as aggressively commercialized seventy years ago as they are today…downright uncanny in its anticipation of today’s news as entertainment culture” (Pauly). Juries at the time were all male, and the newspapers covered the defendants like celebrities. It was said that a beautiful woman could never be convicted for murder in Chicago. Few knew at the time that in spite of presumed objectivity as a newspaperwoman, Watkins had been deeply complicit in the object of her satire. The Chicago Tribune articles were so amusing and persuasive they caused two probable murderesses to go free. Perhaps, this was why she was so reluctant to bring her 1920s hit back into the limelight for a new generation’s scrutiny.

A cub reporter for the Chicago Tribune, Watkins was stuck combing the police blotter for likely stories, her work likely fated to be buried on the back pages. Faced with the case of Belva Gaertner, a tawdry cabaret singer who had evidently shot her lover dead in an automobile, Watkins perked up when she read Belva’s observation, “I liked him and he loved me—but no woman can love a man enough to kill him, because there are always plenty more.” Gaertner’s only defense was that she was drunk. “Gin and guns, either one is bad enough, but together they get you in a dickens of a mess, don’t they?” she shrugged. Watkins shrewdly recognized good copy when she saw it. “No Sweetheart worth killing—Mrs. Gaertner” the headline blared, and Watkins had found her métier.

Shortly afterwards, when an unfaithful married woman committed murder, Watkins was ready. “Woman Plays Jazz Air as Victim Dies” screamed the Trib, and all over Chicago, readers could hear the strains of the foxtrot “Hula Lou” in the air as the jilted beau of Beulah Annan, the “prettiest murderess” bled his life out on the floor of her apartment. The reporter speculated the two killers might compare notes in jail, although “as yet the two have not talked over their common interests. A man, a woman, liquor and a gun.” Watkins called Beulah “the beauty of the cell block” and Belva, “the most stylish of Murderess Row.” Belva and Beulah’s lawyers used the attention that Watkins brought to the cases to tailor the defenses of their attractive clients, eventually winning freedom for them both. Watkins admitted later in her life that she felt some discomfort that her witticisms freed clearly guilty criminals. 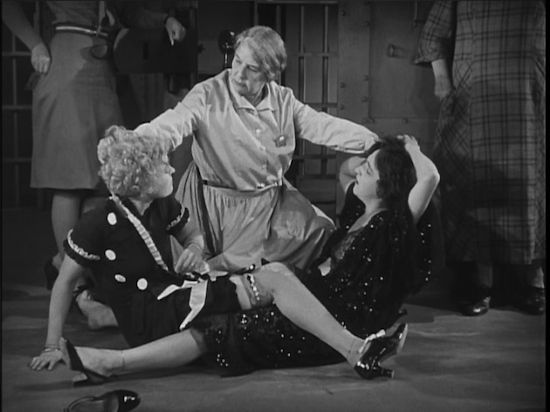 Flirty Phyllis Haver plays Roxie Hart, modeled on “Hula Lou” killer Beulah Annan. She is utterly fantastic in Chicago, her subtle expressions leaving no doubt as to her character’s greed and opportunism. Haver became a Mack Sennett bathing beauty after arriving in Hollywood from Douglas, Kansas. Today, perhaps she is most often seen opposite Buster Keaton in the short, “The Balloonatic.” She was popular in the 1920s, playing a succession of temptresses in films like The Perfect Flapper, D.W. Griffith’s The Battle of the Sexes and with John Barrymore in Don Juan. She married a “Manhattan millionaire” in 1929 and retired from the screen. The marriage didn’t last, and she died of barbiturate poisoning at 61, a suicide. 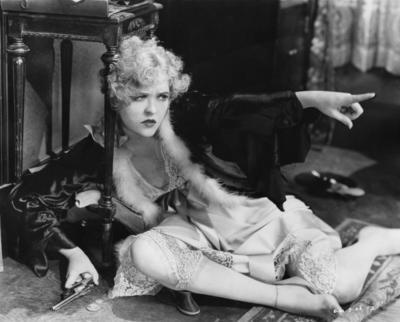 Victor Varconi, as Amos Hart, is not well known today. The most familiar actor to classic movie fans is Roxie’s victim, Eugene Pallette. He was born in Kansas in 1889.  His parents had been actors, and after graduating from a military academy, he played in stock with a touring company.  He ended up in Hollywood in 1913, and acted in both of D. W Griffith’s epics, The Birth of a Nation and Intolerance. After returning from WW I, he began to put on weight, which shifted his career to that as character actor.  He made many silent films, but his most famous roles took advantage of his froggy voice, as Carole Lombard’s father in My Man Godfrey, and as Friar Tuck in Errol Flynn’s Adventures of Robin Hood.  In the late 1940s he bought 3500 acres in rural Oregon and became somewhat of a survivalist, anticipating nuclear catastrophe.  Pallette died of throat cancer in 1954. 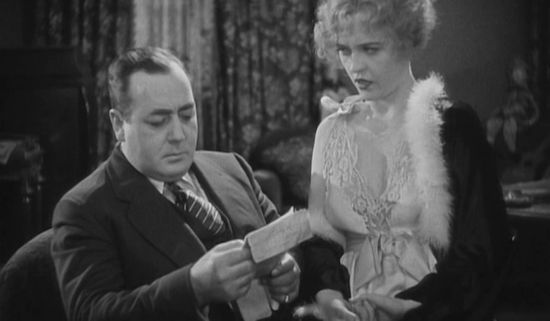 According to Bob Birchard in Cecil B. DeMille’s Hollywood, although the credited director is Frank Urson, one of De Mille’s assistants, every aspect of the production shows evidence that DeMille himself was the director. His favorite team was in place, the photography was by J. Peverell Marley, art direction by Mitchell Leisen, costumes by Adrian and editing by Anne Bauchens. He was supposed to be “supervising” the film, a job we would now call “producer” but Photoplay magazine at the time reported that he was unable to resist directing it himself. Although his records report only that it was “supervised” by him, he kept a personal print in his vault, something he did only with films he directed, not those he supervised. Birchard speculates that it was deemed “too hot” to follow De Mille’s previous film to hit the screens, his pious reflection on the life of Christ, King of Kings, so at this juncture, he chose to conceal his always ardent interest in sin. The major argument against De Mille’s direction is that Chicago is so funny; De Mille was not known for his on screen sense of humor.

David Drazin’s accompaniment was, as usual, superb. He used the song “Chicago” at the beginning and the end, using different moods to chart Roxie’s changing fortunes. His love for 1920s jazz was shown to advantage, especially in the hilarious “ladies jail” sequence, where Roxie gets into an altercation with Julia Faye (another De Mille regular); a real lady “who uses Black Narcissus perfume and never makes the bed.” The Flicker Alley release has a score by the Monte Alto Motion Picture Orchestra.

This print was taken from a 35mm nitrate print in Cecil B. DeMille’s personal collection, and in fact, UCLA has to notify the DeMille estate each time it is shown. The DeMille Foundation financed the restoration. 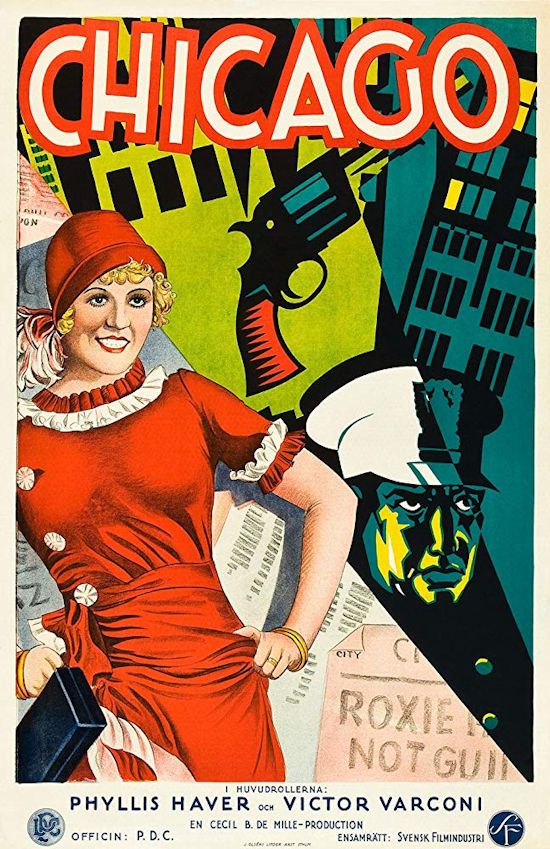 (Photo from www.oscars.org. Sources include, Chicago edited and with an introduction by Thomas H. Pauly, A-Z of Silent Film Comedy by Glen Mitchell, Keystone by Simon Louvish, Film Encyclopedia by Ephraim Katz, Cecil B. DeMille’s Hollywood by Bob Birchard.