Moping through a midlife crisis, Manhattanite Mitch (Crystal) reluctantly joins his besties on a fantasy cowboy vacation.  Grappling with 20th century masculinity issues, the boys seek to impress a rugged trailboss (Palance) under the picturesque cliffs of Abiquiu, New Mexico, easily recognizable from the vivid canvasses of Georgia O’Keefe. “City Slickers is really about how the West can never be more than a dream to contemporary urban Americans. With high comic style, it shows us what a lovely dream that is” (Entertainment Weekly).

After the wild success of When Harry Met Sally, Billy Crystal was suddenly a Hollywood influencer. He had a development deal with Castle Rock, but wasn’t really getting anywhere with devising a new project.  He was home watching television and saw a documentary about fantasy vacations where some friends went scuba diving together.  After one of them said, “It helped the midlife crisis I was having.  Going with my friends on an adventure was just what I needed” Crystal was finally inspired and, uncredited, collaborated with Lowell Ganz and Babaloo Mandel (all in their 40s) the writers of Parenthood and Splash.  It was greenlighted quickly.  “It was that fast.  No studio interference, no midlevel executives, no notes on every page, instead, it was simply, ‘go do it.’” (Crystal 144).

The opening sequence with the running of the bulls in Pamplona, Spain, was assembled in just a few days to film during the actual event (with stunt people).  Mitch wears a Mets hat, even though Crystal was a lifelong Yankees fan.  The Mets waived the logo licensing fee, and accommodated Crystal’s Comic Relief charity fund for a special baseball event, and made a big contribution, unlike the Yankees, who refused on all counts.  Yankee manager George Steinbrenner personally quizzed Crystal about his Mets hat in the movie, and shortly afterwards held a Comic Relief Day at Yankee Stadium and contributed to the charity as an apology.

Learning how to ride a horse was a challenge for the unhorsey cast.  Crystal took to it rather easily, saying in his autobiography that he had a weird sense that he had been a cowboy in a past life.  Bruno Kirby turned out to have an allergy to horses so severe that he received daily injections (of anti-histamines, I presume).  Rick Moranis was originally cast in the Daniel Stern part, but had to drop out when his wife was diagnosed with an eventually fatal illness. Arriving only a day before shooting began, Stern decided that his awkward horsemanship would be part of his character.

Cyrstal loved his horse, Beechnut.  He would arrive an hour early, just to warm up the horse, and spend time with him, he said riding the horse gave him an unusually peaceful feeling.  After the film was over, his agent bought the horse for him as a gift, and Crystal rode him until Beechnut’s death in 2009. 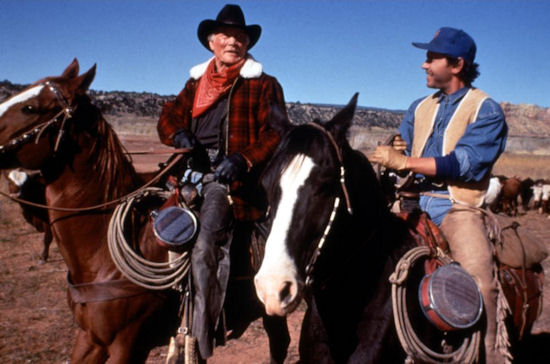 Palance and Crystal on Beechnut

Crystal had never forgotten how terrifying Jack Palance had been in the first movie he had ever seen, Shane.  Palance read for the part of Curley, and was enthusiastic, but had a scheduling conflict.  With time pressure a major factor, they approached their plan B, Charles Bronson, but the actor was insulted by the size of the part and declined, with profanity.  After reflection, Palance decided he would rather play the part in City Slickers, which turned out to be absolutely the right decision, as he won his only Oscar for the role.

Cinematographer Dean Semler, who had won an Oscar for Dances With Wolves, and stunt coordinator Mickey Gilbert, Robert Redford’s stuntman in Butch Cassidy and the Sundance Kid, wanted all the action to look real.  The cattle drive through the river was the first sequence shot, and if it seems like it is really the actors doing the dangerous work, it is.  The actors herded 450 head of cattle down a treacherously muddy slope created by firehoses and giant fans.  Nets were downriver, in case anybody got washed away downstream.  Crystal’s stuntman, Brian Burrows, did all the real dangerous stuff, but it’s Crystal (with a wetsuit under his cowboy togs) holding a 75 pound calf, which was kicking him in panic under the water.  The other dangerous shot was the stampede, with Crystal up in a tree.  The cattle had not been fed, and the feed troughs were on the other side of the tree.  The wranglers fired gunshots to get the cows to rush towards their food.  “They went by me like a tsunami.  A steer’s horn actually grazed my foot, which is in the movie.  We filmed the scene with no movie magic, no special effects, we didn’t use three steers and digitally make them look like 450.  The incident lasts for only a few seconds of footage in the film, but it felt like a lifetime to me” (Crystal 150).

Jack Palance only shot for two weeks on the film, including 10 days that were just him and Crystal.  Crystal admired Palance, “He understood how to act on film better than anyone I had worked with up to that point” (Crystal 152).  But, he was seventy, and the physical part was a little challenging, and he sometimes had trouble remembering his lines.  But Crystal felt it had been an honor to work with him.

Palance was born Walter (Volodymyr) Jack Palahniuk in a Pennsylvania coal mining town, to Ukrainian immigrant parents.  Drawn to boxing and football as a teen, he won an athletic scholarship to UNC Chapel Hill, but was much more interested in sport than classes.  His parents cried when he dropped out of college after two years, to become a professional boxer (he won his first 15 fights) and then to train as a bomber pilot in WW II.  After a serious crash, he was discharged, and went to Stanford on the GI Bill, and where, after a role in a local production, borrowed cash from his roommates and left for New York to become an actor.  He got work right away, eventually understudying and then replacing Marlon Brando in A Streetcar Named Desire.  His first movie role, in the exciting noir Panic in the Streets led to his villainous turn in Shane and then, Sudden Fear. His stellar reviews for this film, even while being labeled “the ugliest man on the screen” got him an Oscar nomination, and then another one the following year when Shane was released.  He would not win an Oscar until City Slickers in 1991.  Crystal hosted the Academy Awards that year, and he said it was one of the best nights he ever had in show business, even though he was deathly ill with pneumonia.  When Palance won the Oscar for Best Supporting Actor and dropped to the floor for some one-armed push-ups, it became one of the show’s best remembered moments.  https://www.youtube.com/watch?v=AGxL5AFzzMY 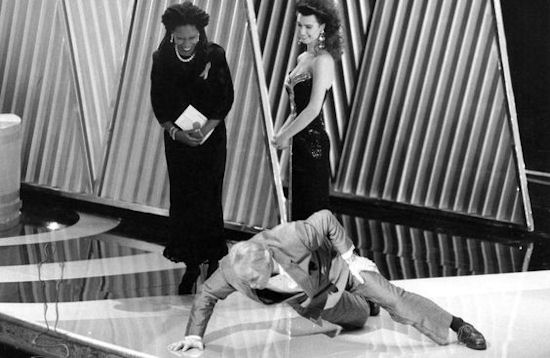 When I saw the film I truly thought that they had actually delivered a real calf—I should know better!  The props department created the back half of a cow, and slathered up a tiny calf with fake blood, and “birthed” it from the prop cow.

The film was one of the top five box office hits of the year, a huge milestone for Castle Rock and for Crystal, personally.  “Finally, people stopped asking me if they looked mahvelous, and started asking me what the ‘one thing’ was, and how was Norman the calf?” (Crystal 154). 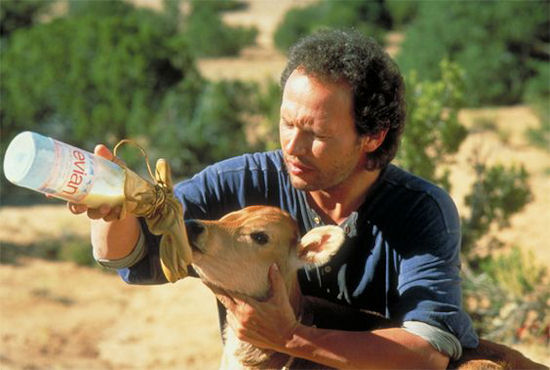 Ten year old Jake Gyllenhaal made his debut in the film, as the son embarrassed to introduce his father at his school’s career day.  He was a show biz kid, his father a director and his mother a screenwriter and producer. After his debut in this film, he acted almost exclusively in tv shows directed by his father to prioritize his education and home life.  His second feature film was the cult favorite Donnie Darko. 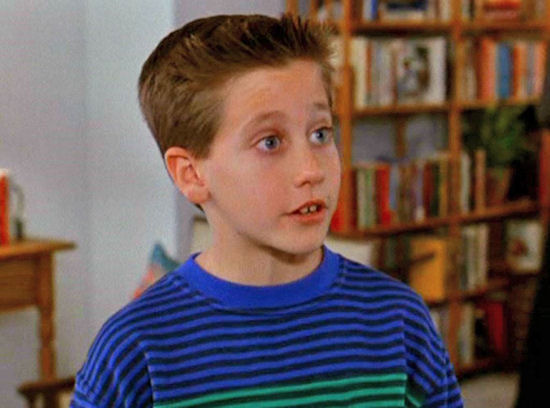 Georgia O’Keeffe first glimpsed New Mexico in 1917, and returned  to Taos for an extended visit at the invitation of Mabel Dodge Luhan in 1929. Captivated with the landscape, she returned nearly every year.  She fell in love with Ghost Ranch, a remote resort for wealthy Easterners, near Abiquiu, New Mexico, forty miles southwest of Taos, in the early 1930s.  She bought a house and 8 acres of land there in 1940, with a sweeping view of the mountains.  Moving to New Mexico validated her identity apart from that of her domineering husband, Alfred Stieglitz.  Captivated by the landscape of the area she wrote, “Badlands roll away outside my door,–hill after hill—red hills of apparently the same sort of earth that you mix with oil to make paint.  All the earth colors of the painter’s palette are out there in the many miles of badlands,  The light Naples yellow through the ochers—orange and red and purple earthy—even the soft earth greens.  You have no associations with those hills—our waste land—I think our most beautiful country” (Drohojowska-Philp (370). In 1945, she bought an old hacienda in Abiquiu, and installed large glass windows overlooking the cottonwood trees by the Chama River on one side, and the vibrantly hued mesa on the other.   O’Keeffe rose with the sun, drank a cup of coffee and went outside searching for inspiration.  “She never misses the first rays of light on the cliffs behind her house” a friend wrote, if she saw a striking color, she was “known to run out into the prairie in her nightgown (ibid 387). She moved permanently to New Mexico in 1949. 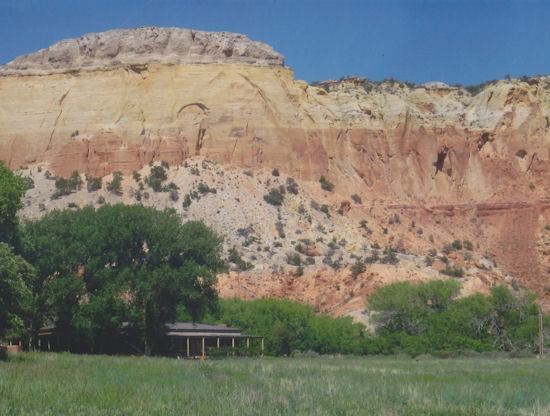 Here is my photograph of O’Keeffe’s beloved cliffs at Ghost Ranch, New Mexico.

The Western is in many ways the quintessential American film genre.  It speaks to the restless manly spirit that conquered unknown territory.  Most Westerns are too racist and too rapey for me.  City Slickers speaks to the adventurous side of urban men looking for an affirmation of their worth in modern society.  Films about male friendship, in the military, in prison (I’m looking at you, #1 IMDB film, Shawshank Redemption) on the range are taken seriously and given awards.  Films about female friendships are called “chick flilcks.”

It’s worth noting that this film does not pass the Bechtdel Test.  There are two major named women characters, but they do not speak to each other, and their roles are helpmeet wife and potential partner (I’m skipping over bitch wife and outraged girlfriend, who scream at each other).  I wish Helen Slater had played a character with more gumption.  Maybe the inevitable remake will have a tough talking Lesbian cowgirl, instead.

Over the centuries, Jews have weaponized the wisecrack, and we should ask ourselves why verbal aggression is considered less “manly” than a gun.  City Slickers is not a perfect film, but it’s not misogynistic bullshit, as a critic of this screening called it, either.  It asks pointedly why violence and the testing of physicality under extreme conditions is the prime validator of masculinity.  Billy Crystal’s character twice enters a charged situation to defuse it with humor, not violence. I would much rather spend my time with a comic than a bully.  How about you?

City Slickers went over big at the North Carolina Museum of Art. It still plays as hilariously funny, and it was great to hear the audience laughing for the entire film. 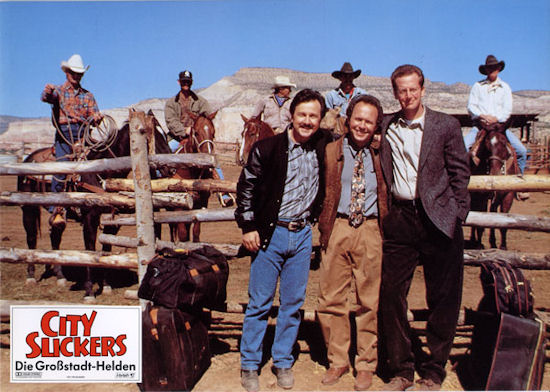 Still Foolin’Em by Billy Crystal, 100 Years of Filmmaking in New Mexico, by the editors of New Mexico Magazine, Full Bloom:  The Art and Life of Georgia O’Keeffe by Hunter Drohojowska-Philp, http://www.denofgeek.com/us/movies/comedy/266857/city-slickers-the-behind-the-scenes-challenges-of-a-comedy-hit , Portrait of an Artist: A Biography of Georgia O’Keeffe by Laurie Lisle, Bad Boys: The Actors of Film Noir by Karen Burroughs Hannsberry.