Izzy is perfectly fine.  She has a nice rent-controlled apartment on the Upper East Side, a fulfilling job at a cozy book shop and a friend with benefits. Her flirtation with an urbane European writer seems to be making progress.  The last thing she needs is her Bubbe making an appointment with a matchmaker hiding a Lower East Side pickle maker in her back pocket.  On its 30th anniversary, the underappreciated Crossing Delancey  “feels suffused with female energy, putting women’s concerns first, and it’s simultaneously sharp and affectionate.”  Forget Dirty Dancing, this Valentine to “nice” 1980s New York City is the best Jewish rom com of all time.

Earlier this year, Wesley Morris, who identifies himself as a gay black man, wrote an article about romantic comedies.  He asked, “Who are we without these movies?  Romantic comedy is the only genre committed to letting relatively ordinary people—no capes, no spaceships, no infinite sequels—figure out how to deal meaningfully with another human being.  These are the lowest stakes movies we have that are also about our highest standards for ourselves…they make you believe in the power of communication” (NYT Magazine April 28, 2019). 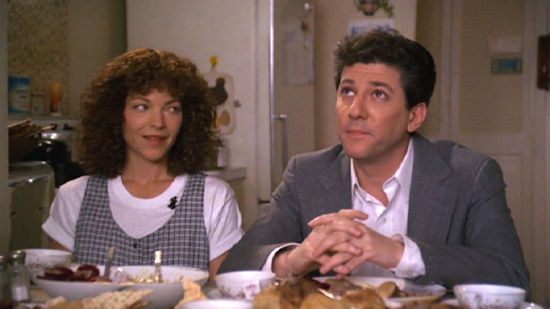 Crossing Delancey is a film in which I can recognize a version of myself in Amy Irving, with her frizzy 80s perm and gigantic overcoat.  She thinks she knows what she wants, but she is open to possibilities.  The film has a female director, Joan Micklin Silver, or, as she was known in Cleveland where I grew up, Rabbi Silver’s daughter in law.  The script is written by a woman, too, Susan Sadler, based on a play that was performed at the 14th Street Y in New York City.  There is no broad slapstick, no major misunderstandings or embarrassments, no bathroom-related humor, praise be.  It’s just Izzy, deeply invested in both her uptown and downtown personal relationships.

Director Joan Micklin Silver was born in Omaha, Nebraska in 1935.  Her parents were Russian Jewish immigrants who arrived in the US in the early 20th century.  She went to Sarah Lawrence College, and married Raphael Silver, son of a famous Cleveland OH rabbi; they had three daughters.  In Cleveland, she was a music teacher and wrote plays that were performed locally.  The family moved to New York City in 1967.  She worked as a screenwriter and then directed a series of award winning short films.  If you have ever been to one of Skip Elsheimer’s AV Geeks shows, he may have shared one of his favorites, “The Fur Coat Club” which was one of them.  Her first feature film was Hester Street (1975) an immigration story, and, like this film, named after a street on the Lower East Side of New York City.  Her husband raised the money, and John Cassavetes helped them with distribution.  Even though she had been told, “women directors were another problem the studio didn’t need” Hester Street became one of the first independent films to get an Oscar nomination, for Carol Kane as Best Actress.  Just because she had one successful film, did not mean she could easily secure financing for her second feature, Between the Lines, or her third, Chilly Scenes of Winter.

Playwright Susan Sandler got in touch with Silver, asking her to come and attend her five character play, to see if it had possibilities as a movie, which it did.  When they started casting the film, Silver felt lucky to be able to find Reizel Bozyk, a well-known Yiddish theater actor, who did not want to act in a movie, to play Izzy’s grandmother.  She changed her mind when she met Silver.  “Then it occurred to me that I should have Amy meet her, because I adored her, but wanted to make sure she and Amy got along. The next day Amy came and waited. Finally the receptionist said Reizel was there, so I told Amy I’d go get her. I started walking down this long hallway, and suddenly Amy went scooting by me, and by the time I got to them they were already with their arms around each other. They got along wonderfully, and hit it off immediately—they loved each other. It was wonderful. That was by far the hardest casting decision” (filmmakermagazine.com).  Sandler would only let her play be filmed if Peter Riegert was the lead, and since Silver had worked with him in her previous film, she was thrilled to cast him. 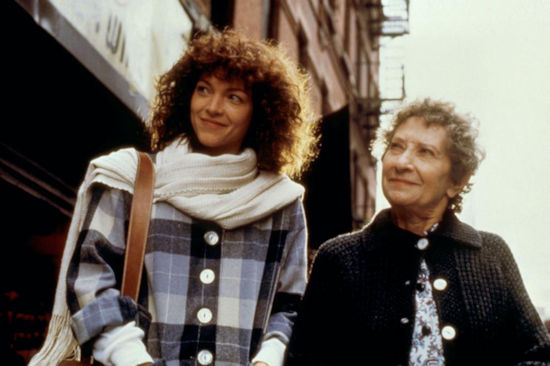 Silver said choosing Amy Irving happened in an offbeat way.  They had been reading actresses for Izzy without much success.  At a movie screening in NYC, she sat across the aisle from Irving, who she didn’t know.  She was tossing popcorn in the air and catching it in her mouth, and Silver was captivated, it was exactly the quality she wanted in Izzy.  Later, Silver went to dinner with Irving and her husband, Steven Spielberg, and they discussed financing the film. “And Steven said to me, “You mean you’ve got a script this good and you can’t finance it?” I said, “Well, yeah.” He said, “Have you gone to Warner Brothers?” “No, I don’t know anybody at Warner Brothers.” He said, “Well, how would you feel if I went to Warner Brothers?” I said I would be just delighted. We finished our meal and Amy said “I guess we’ll make it at Warner Brothers.” I said, “Amy, we don’t know that—he hasn’t even said anything yet!” But she of course knew that if he wanted it to happen, it would happen” (filmmakermagazine.com).

One of the subjects I harp upon is that while it’s important for women to write films and direct films, until there are more female film critics, and women programming films, underappreciated gems like this one will be continuously lost in the shuffle.  The male critics of the day, including Roger Ebert sniffed at it, but women have always loved this film, “Sheila Benson at the LA Times compared it to Moonstruck, calling it “at once hip and romantic; wittily sophisticated and unabashedly affectionate; a love poem to all New York” (tabletmag.com).   I love a New York movie, and this one is a valentine to a vanished part of the city.  Not only are there wonderful locations, but some of the people you see were well-known urban characters at the time, like the lady who sings “Some Enchanted Evening.”  Izzy’s book store is patronized by real writers of the day.  Pat Oleszko, who sings “Take your hands off me” covered in a suit of stuffed hands, was a real performance artist, I saw her do this piece in Cincinnati! Bubbe’s “Jewish accent” is also a thing of the past. Since the Yiddish speakers were exterminted by and large during WW II, there are no more immigrants arriving in the US, and learning English in this distinctive cadence. The Jewish Lower East Side has been replaced, in large part, by a gentrified one—now no regular person can afford the tenement apartments where our ancestors sweated and shivered and used the fetid outhouse in the courtyard. 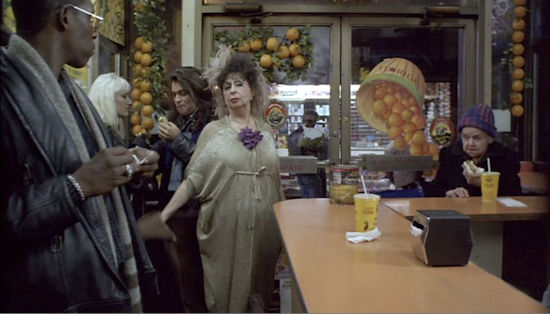 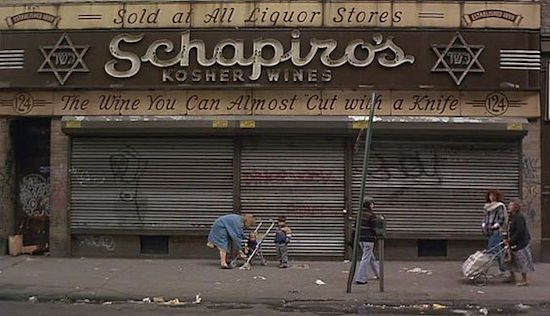 Because rom coms are always about opposites attracting, when there is a Jewish character, their perfect mate is often a non-Jew.  Harry, in When Harry Met Sally is not identified as Jewish, but he is, and we can tell Sally is not.  In Dirty Dancing, Baby yearns after the older, definitely non-Jewish dance instructor.  In all the many episodes of the Seinfeld show, all but one of Jerry’s dates were Gentile (jta.org).  The actors in the film are Jewish, or at least half, as well, not just Yiddish theater star Reizl Bozyk; the representation was important.  Peter Riegert is Jewish, Amy Irving’s father was, and even Jeroen Krabbé, the Dutch actor who plays Anton Maes, had a Jewish mother whose family was obliterated by the Holocaust.  It’s a film about assimilation, because Izzy doesn’t feel very Jewish to herself, until she feels drawn to someone who has managed to integrate his Jewish identity in a very personal way.

I definitely feel the dearth of modern romantic comedy, and not just because, as Wesley Morris points out in his NYT Magazine piece that there are few moderate budget films made nowadays.  Since foreign grosses are so important, these are dialogue heavy films that demand an intimate knowledge of our culture and language, much harder to ship overseas than an explosion or a car chase. There was a golden age in the 1930s, and again in the 1980s. Perhaps, someday Hollywood will return to to this appealing genre. 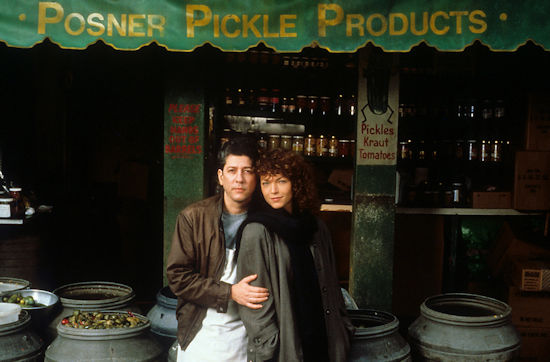