A millionaire creates The Ounce Foundation for the Elevation of American Morals.  Too bad his niece is set to star in “Sweet and Hot” on Broadway.  A swan song (or raspberry) to the encroaching Production Code, this Busby Berkeley-choreographed gem highlights his signature geometric eroticism.  “Nowhere will you find a more paralyzing succession of archetypal 1930s pop culture moments. This much fun is usually illegal…” (Bright Lights Film Journal).

Art Deco was made for the movies and the movies were made for Art Deco.  Our homes may not have dramatic metallic shapes and creamy white curves, but our ideal cinema does.  We all want to live in the angular rooms, drive the roaring motorcars and wear the sleek clothes we will see in the films in this series.

Although the phrase Art Deco is common parlance today, it’s a relatively recent invention.  It’s a portmanteau term coined to describe a 1966 Musee des Arts Decoratifs retrospective of the 1925 Paris Exposition, which featured objects created in an exuberant style encompassing 1920s Modernism, Streamline Moderne, International Style, Bauhaus and Russian Constructivism.  Cinema designers of the 1920s and 30s enthusiastically embraced and popularized these related styles in movies, especially when depicting the wealthy, the corrupt, the cultured, and the glamorous woman of the world.  The middle class still embraced the cozy clutter of Victorian interiors, but the rich endorsed a minimal modern aesthetic, as did the design geniuses of the stage and screen. 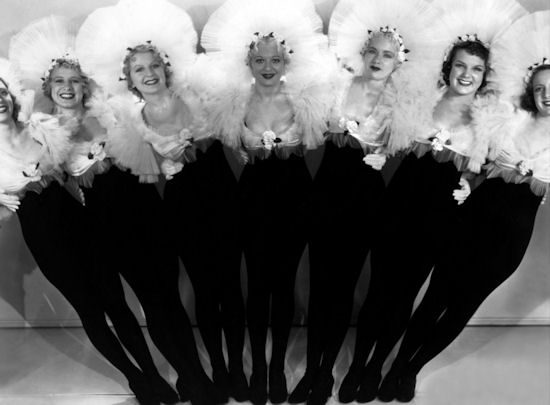 Dames followed Busby Berkeley’s most notable early 1930s successes, 42nd Street, Footlight Parade, and Golddiggers of 1933. The Golddiggers had been Warner Brothers top grossing film of the year, and it had been in the theaters only six weeks when the studio bosses demanded another one along the same lines.  Producer Hal Wallis was a dedicated penny pincher and hated indulging choreographer Busby Berkeley’s excesses.  Wallis allocated 36 dancers and $15,000 for “I Only Have Eyes for You.”  But Berkeley wanted $50,000 and 250 dancers, and Wallis was forced to compromise if he wanted a hit as big as the last one. The trailer says there are 350 dancers, but it’s awfully difficult to count. 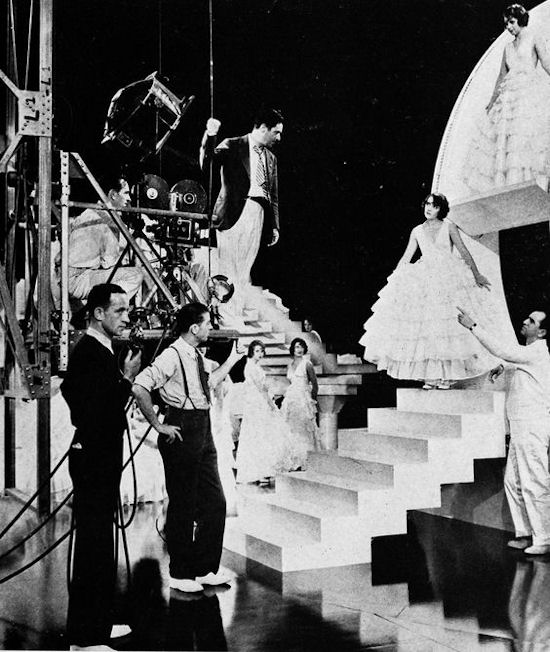 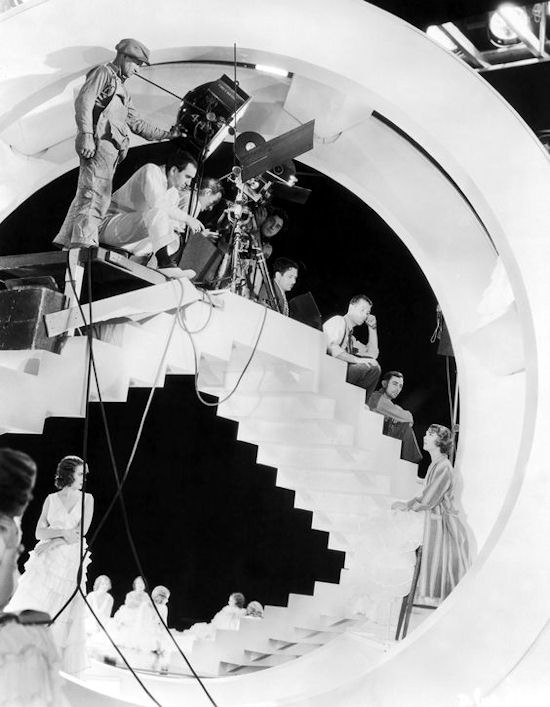 Busby Berkeley with two of the elaborate camera set-ups demanded for his musical numbers.

With FDR in the Oval Office, and prosperity just around the corner, Warner Brothers was free not just to envy the rich, but to mock them.  One of the persistent quirks of American Puritanism is that the most energetic crusaders are often the most susceptible to temptation, as we see with Ezra Ounce (his name a random joke on the name of the poet Ezra Pound) enthusiastic founder of the Ounce Foundation for the Elevation of American Morals.  It doesn’t take a psychic to see that his rigorous policing of other people’s morality exposes him to the possibility of corruption. Especially since his hiccups are soothed only by a Prohibition-escaping patent medicine that is largely alcohol.  Censors’ fingers were wagged at some of the dialogue, which was then excised, but as usual, their imagination failed with Berkeley’s suggestive dance configurations.  The final number, asserting we go to a show to see “those cute and cunning, young and beautiful dames” is transparent in its appreciation of sexuality.  Or, as Jane Feuer says, “Dames asks us to give thanks to show business for the pleasures we are about to receive” (Feuer 42).

Rather than focusing on the romance of Ruby Keeler and Dick Powell, as earlier films had, or saucy Joan Blondell out to charm a potential financial backer, this film features three of Warner Brothers stellar character actors, Hugh Herbert, Guy Kibbee, and ZaZu Pitts. 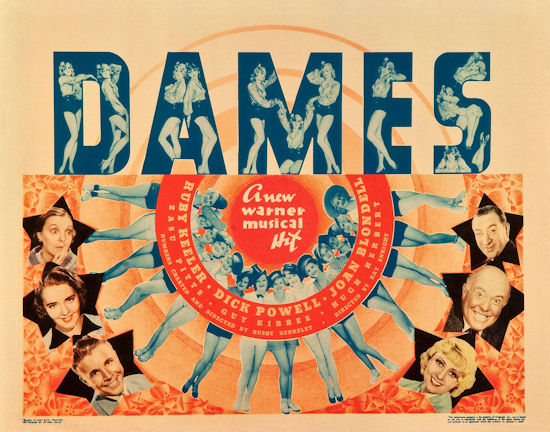 Hugh Herbert began in vaudeville, but after arriving in Hollywood with the talkies he developed a distinctive character, with a giggle and a “who hoo hoo” that became his trademark.  He was a popular addition to many Warner Brothers films of the decade.

Guy Kibbee, with whom I share a birthday, began working on Mississippi river boats as an entertainer when he was 13, and then progressed to the stage.  He was a stalwart of Warner Brother films of the 30s, playing pompous or gullible small-town characters, including the title role in Sinclair Lewis’ Babbitt, the embodiment of shallow 20s boosterism.

Fluttery Zazu Pitts (her name a combination of her aunts Eliza and Susan) began her career in the silent era, where she was discovered by Frances Marion and cast in a Mary Pickford film. Erich von Stroheim decided she was wasted in comedy roles and cast her as the female lead in his epic Greed.  After the arrival of sound, she returned to her comedy roots, playing many supporting roles in features and in a long series of two-reel comedies with Thelma Todd.

Joan Blondell was born in a trunk, her parents were vaudevillians, and she spent her youth on the road.  During her WB years, she worked ceaselessly as the studio demanded. In her eight years at Warners in the 1930s, she made 52 films.  Her long movie career, as her biographer observed, stretched from The Jazz Singer to Star Wars.  She was seven months pregnant when she made this film, she went on a brief maternity leave right after shooting wrapped.  You might want to amuse yourself with all the ways that the cinematographer, her husband, George Barnes, camouflaged her condition.  Two years later, after they divorced, she married her frequent co-star, Dick Powell. 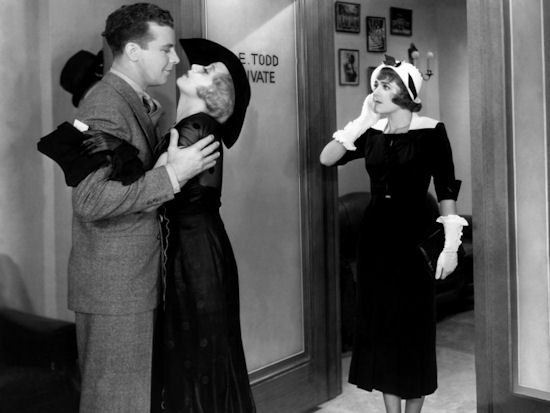 Ruby Keeler uses a phrase in this film that we rightly find offensive, asserting she’s “free, white and 21” and can do what she likes.  This phrase seeks to borrow white male privilege for a powerless character.  In films of the 30s and 40s, it is often used by women who don’t have a lot of choices, and often, it is said right before she is about to make a bad one, perhaps to show that women were, after all, not capable of making good choices on their own.  The black press took notice of the proliferation of this phrase. The Chicago Defender wondered if the use of the phrase was “to further inflate the ego of their white patrons” and it certainly “detracted considerably from the serenity and pleasure” of African American audiences.  A son remembered his mother, at the time a young black movie goer in Philadelphia, storming out of Dames vowing never to see another film with Ruby Keeler.  Still, the phrase was so widespread, it meant boycotting more than one popular actress. The Production code regulated sex and violence, but racism was perfectly permissible.

Dames was the first movie that Warner Brothers had to submit to the Production Code.  Even though the Code clearly stated, “the nude or the semi-nude body may be beautiful does not make its use in the films moral” (Kennedy 64) (which Berkeley clearly ignored) Dames was passed with just a bit of hesitation about Blondell’s blackmail racket.  The fact that the entire film mocks the motion pictures moral arbiters was lost on the censors who gave the film its seal of approval. 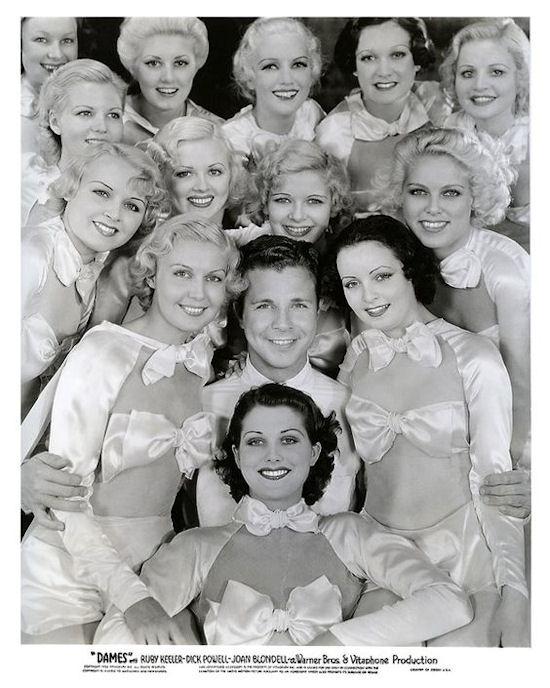 As in other Berkeley movies, his most spectacular number is held back for a delirious finale.  As Richard Brody in The New Yorker described it, “The title number, a balletic day in the life of a showgirl, gives rise to one of Berkeley’s greatest visual inventions, a white background festooned with dancing girls’ black-clad legs—which rhythmically open and close to yield up a flying wedge of pubic rapture, ending with a black hole—at the end of which is a dancer dressed in baby clothes.  It suggests nothing less than “The Origin of the World.” 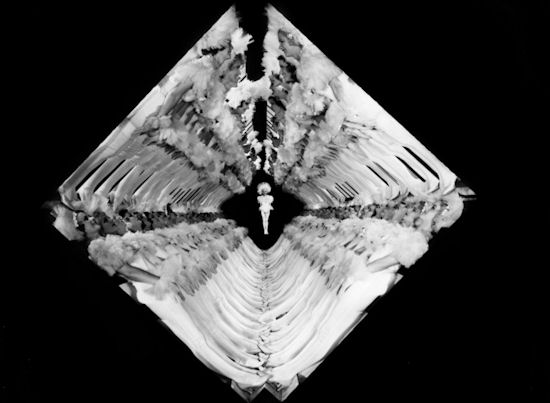 Sources include: Screen Deco: A Celebration of High Style in Hollywood by Howard Mandelbaum and Eric Myers, The Busby Berkeley Book by Tony Thomas and Jim Terry with Busby Berkeley, Buzz: The Life and Art of Busby Berkeley by Jeffrey Spivak, Joan Blondell: A Life Between Takes by Matthew Kennedy   http://pictorial.jezebel.com/the-rise-and-fall-of-an-all-american-catchphrase-free-1729621311,

pre-code.com is a great resource for commentary on early 1930s films. You can watch a great promo short in Danny’s essay on Dames : http://pre-code.com/dames-1934-review-joan-blondell-ruby-keeler-dick-powell/