Klaatu, an extra-terrestrial ambassador on a peace mission, and his robot, Gort, land in Washington D.C. in their flying saucer. Klaatu dismisses the Cold War consuming Earth as a “petty squabble” but fears its capacity for triggering mass destruction. Politicians, soldiers and the media are the enemy, squared off against the sane influences of women, children and an Einstein-ish scientist. The evocative Theremin score is by the maestro who wrote music for films from Citizen Kane to Vertigo and Psycho to Taxi Driver, thrillingly underscoring the mission of an inerstellar Messiah. “Gort! Klaatu barada nicto!”

TDTESS was adapted from a 1940 story published in Astounding Science Fiction, a pulp magazine beloved of younger readers, but somewhat lacking in intellectual cache. Harry Bates was paid $500.00 by 20th Century Fox for his story, “Farewell to the Master.” In it, the Robot Gort was the Master, and Klaatu his servant, the reverse of the movie. The science fiction film genre had relatively few serious entries to its credit before TDTESS. Metropolis (1926) and Things to Come (1936) stand out for lack of competition, provided mostly by the likes of Saturday afternoon serials, such as those featuring Flash Gordon and Crash Corrigan. This film was envisioned from the beginning as an “A” picture with first rate production values and cast, and struck such a chord with Cold War audiences that Sci-Fi films have been taken seriously ever since.

Robert Wise directed TDTESS. He has quite a varied filmography. He began as an editor; an early assignment was Orson Welles’ Citizen Kane. Two years later, he recut Welles’ masterpiece The Magnificent Ambersons to studio specifications, earning Welles’ eternal ire. Wise directed both The Sound of Music and also (in my opinion) the scariest movie ever, the 1963 version of The Haunting. In an interview, he was asked what “grabbed” him about TDTESS: “Two or three things. Number one, it was (for once) an alien from outer space who was not an evil alien. Also, it was a science fiction film set on earth here, and I thought that was marvelous. I liked the setting, the fact that it was in Washington, the heart of our country. I thought that made it very real, very believable, very mundane. I tried to heighten that with my casting, too. I wanted to make it just as credible and believable as it could possibly be, and I think that is one of its strengths.”

Wise originally wanted Claude Rains for Klaatu. The first idea had been to cast Spencer Tracy, although everyone admitted it was hard to envision him walking out of a flying saucer. Producer Darryl Zanuck saw Michael Rennie on stage in England, and felt an unknown face would bring another level of realism.. Patricia Neal played the heroine with great intensity, although she was a bit skeptical about the project. In her autobiography she wrote, “I do think it’s the best science fiction film ever made, although I admit that I sometimes had a difficult time keeping a straight face. Michael would patiently watch me bite my lips to avoid giggling and ask, with true British reserve, ‘Is that the way you intend to play it?'” Rennie also advised her, when she was hounded by the press (she was in the middle of a torrid affair with the older, married Gary Cooper) she should reply with great dignity, “Klaatu barada nicto.” 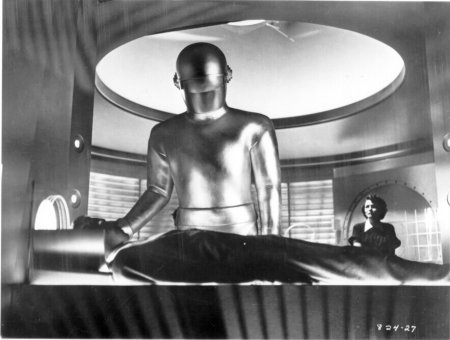 Lock Martin, the 7 1/2 foot tall doorman at Grauman’s Chinese Theater played Gort, the robot, in a suffocating rubber costume. Vivian Sobchack in Screening Space sees him as a “perverse visualization of the medaeval knight in shining armor.” The flying saucer, which she describes as “so pure in line, so aesthetically designed by Lyle Wheeler and Addison Hehr that it concretizes the Platonic virtues of clarity, sanity, reason–virtues sadly lacking in the Washington D.C. mise en scene where the saucer comes to rest” was made of wood, wire and plaster of Paris.

The memorable music was written by the brilliant, tempestuous Bernard Herrmann. He used 2 Theremins for the otherworldly sounds, one pitched high and one low. The Theremin was an early electronic instrument that had occasionally been used with great effect in film scores, notably in Miklos Rozsa’s music for Hitchcock’s Spellbound. Herrmann rounded out the unusual instrumentation with electric violin, bass and guitar, along with 4 pianos, 4 harps and an unorthodox collection of brass. He said modestly, “It is a most experimental score, way ahead of all the avant garde work of its day.”

TDTESS was a liberal movie in a paranoid era. The Army read the script and refused to cooperate, although the National Guard gladly did. Sam Jaffe, who plays the wise scientist, was under the shadow of the Commie-hunting House Un-American Activities Committee, as was the model for his character, Albert Einstein. Fifty years ago, to be a pacifist was to ignite suspicion. But, Klaatu warns the Earthlings dipping their toes in the Atomic Age, “Join us and live in peace, or pursue your present course and face obliterationthe decision is yours.” 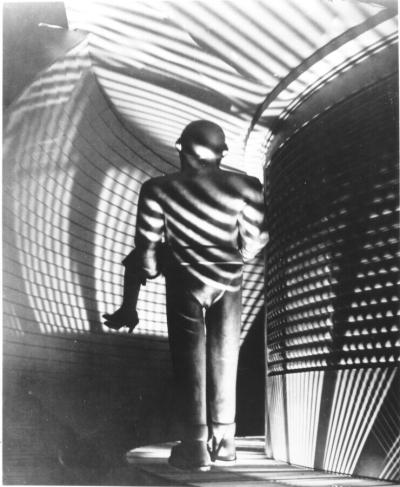 The BBC wants to know: How has The Day The Earth Stood Still influenced you? Until April 2007, share your recollections about the place science fiction has had in your life. The aim is a collective, user-written autobiography of science fiction.

Come and put the case for The Day The Earth Stood Still at: My Science Fiction Life