A girl savoring the last hour of childhood before donning a Muslim headscarf, a desperate female bicycle racer and a determined old woman fulfilling her dream are the heroines of three fables about a woman’s place in Islamic society, in this superb example of New Iranian Cinema.

Director Marzieh Meshkini is the wife of Iranian director Mohsen Makhmalbaf and a graduate of the Makmalbaf Film School. The school was established in 1996 by Makhmalbaf as a way of sharing his cinematic expertise. Originally, he sought state support, but, for whatever reason, he abandoned this quest, and created the school in his Tehran house, with the student body consisting of eight friends and family members. This four year program, which includes a production arm so the students can actually make films, stresses reading about cinema more than watching it, perhaps as a necessary result of Iran’s closed society. Essentially a family cooperative, this artisan view of filmmaking has resulted in some of the major works of Iranian film in the past decade or so. Although films originating at the School bear the names of different directors, many critics assume that Makhmalbaf is in fact the guiding hand in all of these enterprises, and exact authorship may be difficult to determine.

Makhmalbaf was born in 1957, and left school at 11 to support his family. His grandmother believed movie going was a direct ticket to hell, and he did not see a film until he was 23. He once explained, “Cinema in our country meant selling dreams to people who longed for ideals” (Ridgeon). He became an Islamic militant who was arrested and jailed for his activities, and was released by the Islamic Revolution that brought the Ayatollah Khoumeini to power. His militancy began to change as he became more involved in filmmaking, and was later chastised by the ruling regime for hinting Iran’s problems did not end with the deposition of the Shah. A writer of short stories as well as a director, he has become more interested in filming psychological truth than representing Islamic ideals.

This first feature by director Meshkini was envisioned as a short film, and the resulting work is in some ways three short films. It was filmed on Kish Island, a shopping zone in the Persian Gulf that combines beaches and bicycle paths (in fact the only one in Iran where women are freely allowed to ride bikes, forbidden in Tehran and elsewhere) and Singapore-style commerce, where Iranians can buy duty-free electrical goods.

Although only the first of the three stories literally looks at “becoming a woman” by telling a story of a young girl who must begin wearing a Muslim headscarf, all three stories look at different transformational experiences of womanhood. The director says she is not a feminist, but at the same time says she supports equal rights for women, the careful talk one must negotiate in a theocracy. In the first story, the little girl is named “Hara” the Persian name for Eve, in the second, she is “Ahoo”, meaning deer, and in the third, “Houra”, a nymph.

Censorship is strict in Iranian films. The cinema was intimately associated with the Shah, who used the media as a tool for Westernizing Iran, a goal completely opposite that of the current regime. The Ayatollah Khoumeini insisted that films produced in Iran reflect Islamic values. The appearance of women continues to be strictly monitored. For example, while Muslim women would take off their headscaves in the presence of thier husbands or close family members, this is not permitted on screen, because the audience becomes a spectator to her unveiling. But, if the actress must remain veiled before the audience, this would change the meaning when viewed by an Islamic audience, for example, indicating that a married couple was estranged. Physical contact between the sexes is forbidden, of course, but even eye contact is prohibited in some cases, resulting in shot and reverse shot rather than two people in the same frame. This is also why there are many scenes contain performers of just one gender, and why so many films star children. In fact, Iranian censors wanted to cut the scene in the first section of this film, where two children share a lollipop, as too erotic, but this scene was not cut for the international release, and even was shown in Iran.

We in the Triangle have had our consciousness raised about new Iranian cinema by Godfrey Cheshire, a home-grown critic seeking, and achieving, an international stage by championing these films. Of course, not every single one is a deathless masterpiece as he may claim, and some of the films, heavily influenced by Italian neo-realistic classics like The Bicycle Thief have not, in fact, sprung like Athena from Zeus’s brow, but do have a strong cinematic antecedent. The Day I Became a Woman seems strongly influenced by another, quite different Italian director, Federico Fellini. 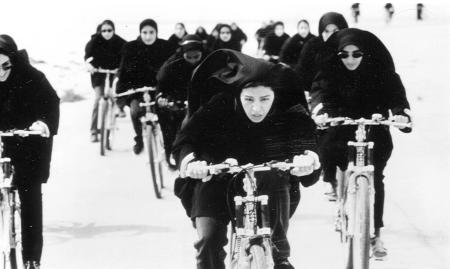