Haunted by a recurring nightmare, an architect arrives at a country house with a disturbing sense of déjà vu, inspiring the guests to take turns swapping supernatural tales. This omnibus film’s influence in the genre is far-reaching.   “A dead scary horror movie that skimps on the blood but not the goose bumps, Dead of Night‘s a contender for Best of British…a venerable little chiller that hasn’t lost a scrap of its hair-raising power over the last 60 years. Be afraid, be very afraid” (BBC).

Cinema and psychoanalysis evolved on similar timelines at the end of the 19th century.  The 1940s was a rich moment for Freud in film. This film uses his theories of the Uncanny, in which a seemingly comfortable and familiar space allows the intrusion of terror. Horror films reflect the times in which they are made, and these tales are shadowed by the spectre of World War II. Also very much of the time is the mansplaining psychoanalyst, who hastenes to assign a clinical name to every incident.

The storytelling framework, in which a long narrative contains short stories can be traced back to The Thousand and One Nights and beyond, as well as to the Canterbury Tales, in which pilgrims en route to a shrine share stories; it is no accident that this film is set at Pilgrim’s Farm. The anthology was a popular method for assembling ghost stories, from Edgar Allan Poe to Charles Dickens and continuing to many masters of the form like M. R. James and Sheridan Le Fanu. To Americans the film evokes the anthology tv shows of the early 1960s, The Twilight Zone, Alfred Hitchcock Presents and The Outer Limits, and in fact at least two of these stories were pinched by The Twilight Zone. 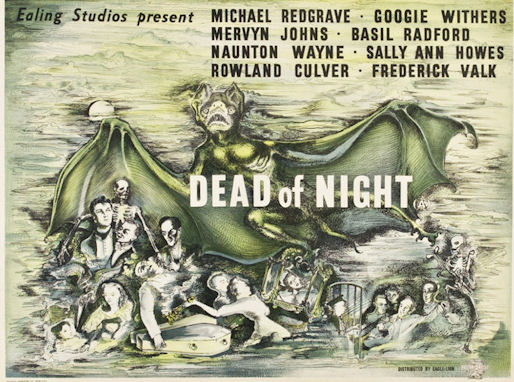 This film brought together all the best writers, directors and actors working in Britain at the time.  The script was co-written by Angus MacPhail, who would adapt Spellbound for Hitchcock, also in 1945.  There are a couple of rudimentary camera tricks in the golfing story, but everything else done by the art department and the camera.

Architect Walter Craig is Welsh, this is significant because of a British stereotype, that the Welsh are superstitious, and suggestible to supernatural influences.  He provides a bridge to the English steadfastness and level-headedness.  Craig’s recurring nightmare is an echo of the recurring nightmare of war, from which Britain is just beginning to struggle free.  An interest in spiritualism surged after the WW I, as survivors hoped to contact lost loved ones. Post-war ghost stories seem to speak directly to that desire. 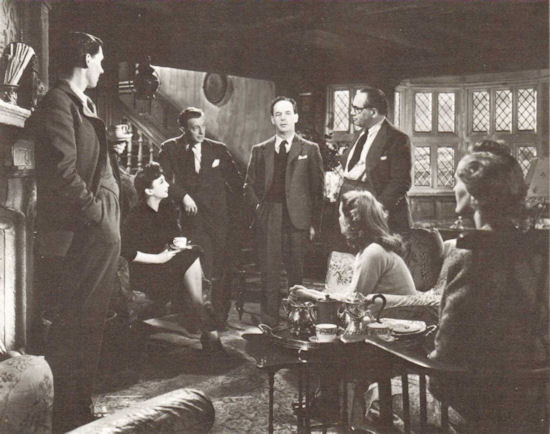 The gathering in the farmhouse 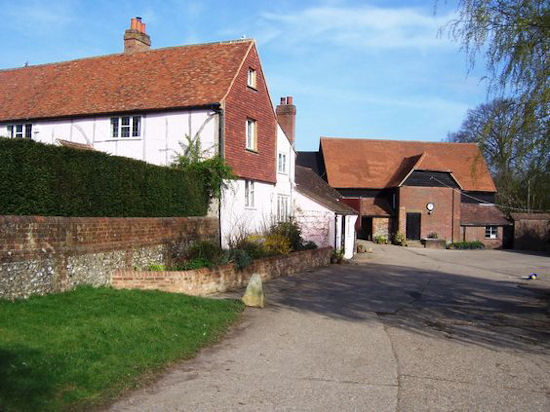 The first of the five tales was based on a 1906 story by E. F. Benson, which was itself based on an incident from 1879, told often and embellished over time by Lord Dufferin, the British Ambassador to France, “a deeply apocryphal story” (Conolly and Bates 47).  Notice the silence in the sound design, in modern movies, where the loud boom of the jump scare is mandatory.The story incorporates details of Victorian Death Culture, for example, the belief that leaving flowers in a hospital room overnight would create so much carbon dioxide that the patient would die, juxtaposed with a more modern belief in psychoanalysis, and the interpretation of dreams.

The second story is inspired by a sensational 19th century murder case.  It also draws on the shared cultural experience of ghost stories told around the fire on Christmas Eve, which resonates most strongly because of Dickens’ A Christmas Carol, but was part of a larger storytelling tradition.  Although to us, seeing a children’s fancy dress party would seem to be nothing more than that, to the original audience it would have evoked all the children sent away to the country during the war to keep them safe from German bombs.  Often older children parented younger children, haunted by the fear that they were essentially powerless to keep the littlest ones safe during wartime. 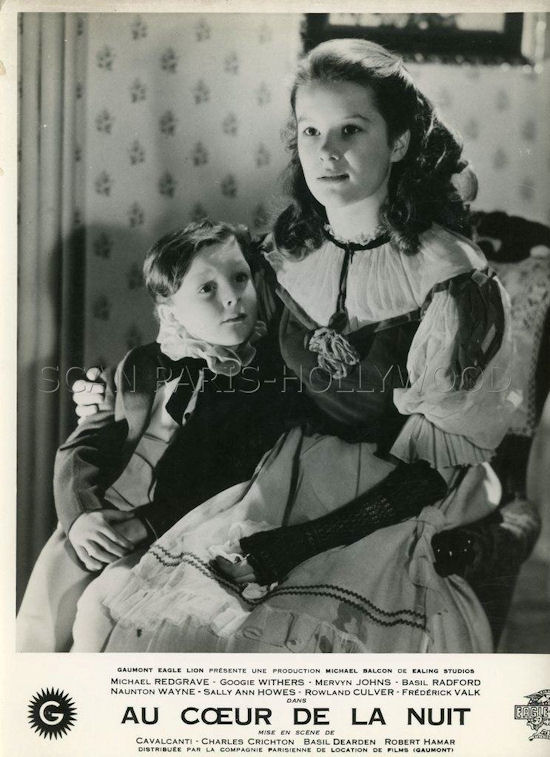 “The Haunted Mirror” reminds us that mirrors have been a portal to the supernatural dating back to Chinese and Greek mythology.  There are fairy tale mirrors in Snow White and Beauty and the Beast, and Alice steps through a looking glass to Wonderland.  Poet and filmmaker Jean Cocteau loved mirror imagery, in his film Orphee, one character says, “Mirrors are the doorways through with Death comes and goes.  If you look in a mirror all your life, you will see Death at work” (Conolly and Bates 72).   In films, mirrors often represent a fragmented personality, this mirror has three panels to create multiple reflections.  It also hints at male uneasiness at the prospect of returning to civilian life, in “The Haunted Mirror” it is the capable female, played by one of England’s most famous female stars, Googie Withers, who has the power. 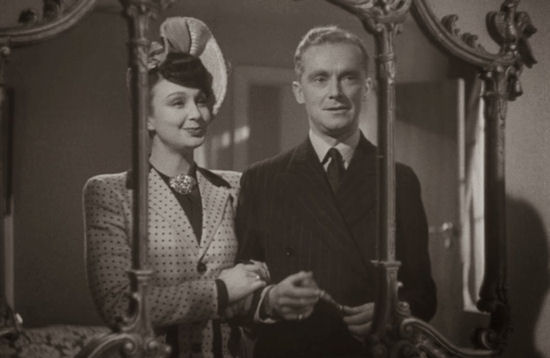 Many critics wish the fourth “Golfing Story” had been cut from the film, as the tone is so different from the other chapters.  But, its lighter tone sets the stage for the final tale.  Fair play is a vital component to the character of British manhood, a philosophy put to the test on the killing fields of war.  Although part of the comic ghost story tradition that includes Topper and Blithe Spirit, this story also evokes the survivor guilt of many military returnees.  The comedy team of Basil Radford and Naunton Wayne are featured. They first appeared in Alfred Hitchcock’s The Lady Vanishes and were so popular that they brought their “upper class twit” routine to many other films and radio shows. We saw them earlier this year in Passport to Pimlico. They are a bit of a mystery to the American viewer. 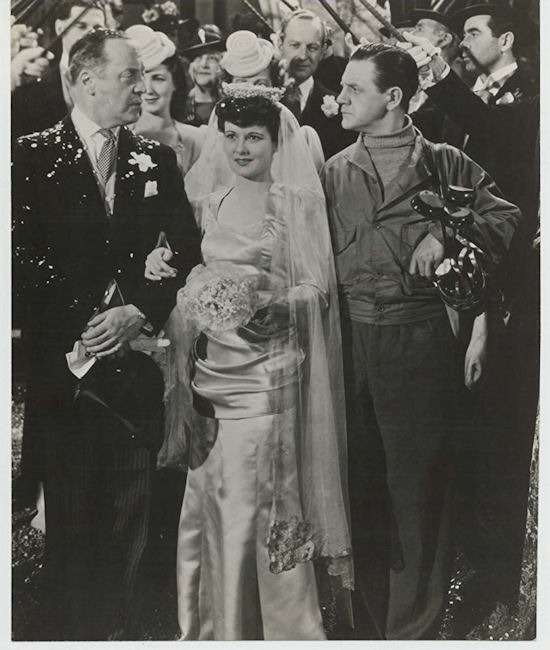 The final tale, “Ventriloquist’s Dummy” evokes the Uncanny Valley, a current topic of conversation because of AI, exploiting the unease when we are unsure if something is alive or an inanimate object.  Now, hearing a disembodied voice is commonplace, but before the invention of the telephone, a voice without a body was associated with sorcery or spiritualism; it was extremely disquieting.  At the beginning of ventriloquism, a realistoc dummy was not part of the tradition, but they evolved to a more human appearance, in character often that of a bratty child. Michael Redgrave prepared meticulously for the role.  He was already fascinated with ventriloquists, often hiring them to entertain at his children’s (Vanessa, Lynn and Colin) parties. He worked carefully with popular ventriloquist Peter Brough, who, like Edgar Bergen, was a ventriloquist on the radio, which seems ridiculous today.  Redgrave was coached to keep his mouth slightly open, although the voice, his own, was dubbed.  One colleague remembered, “Even when he was having lunch he insisted on remaining in character” (Sellers 78).

During WWII, the British felt their Empire eclipsed by the brash American empire in defeating the Axis powers.  Maxwell Frere, played by Michael Redgrave, is “British male sexual anxiety personified” (Conolly and Bates 102) overwhelmed by his dummy, Hugo’s, confidence.  Redgrave was a tall, handsome leading man of stage and screen, who struggled in real life with alcoholism and his bisexuality, conflicts that he seems to bring to his character.  It was shocking for contemporary filmgoers to see Redgrave, so often representing the perfect British hero, unravelling. 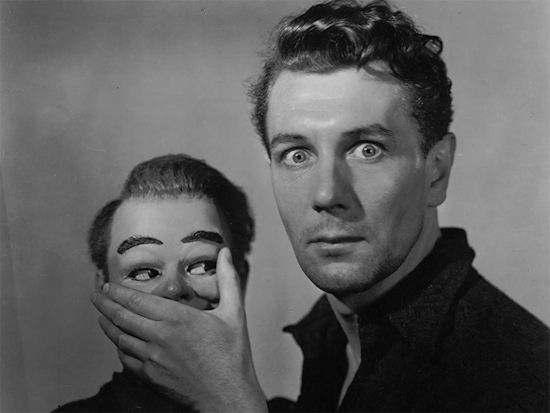 Dead of Night was released two days after the end of WWII, yet the film does not overtly acknowledge the war at all.  Londoners live in a city that has not been bombed, and golf and auto racing continues even though both were banned during wartime.  The nightly bombings deprived city dwellers of their sleep, just as Walter Craig’s recurring nightmares deprive him of an uninterrupted night.  The sketch under the main title is a Henry Moore drawing “Figure in a Shelter” sketched during an air raid.
During the war the making and showing of horror films was discouraged.  We think of horror films as being very English, because of the Universal Studios films with Boris Karloff, Elsa Lanchester and Colin Clive, and James Whale behind the camera, and the cycle of Hammer Horror films starting in the 1950s.  But, this film is a unique entry in British filmography, a rare horror film for its day.  With the war over, no longer did filmmakers have to consider the “national interest” when making a movie.
Martin Scorsese listed this film as #5 in his Eleven Scariest Horror Movies of All Time according the The Daily Beast (Conolly and Bates 8).

It’s worth noting how many of these stories feature beds.  “The bed, our stationary carriage of birth, sex, dreams, sickness and death, in which we sleep off a third of our lives, has long been a primary staple environment for scares through supernatural literature and cinema.  Horror writers and filmmakers have succeeded if their work inspires a fear of the place of sleep among their audience” (Conolly and Bates 50).  Perhaps, we will do you this favor, tonight. 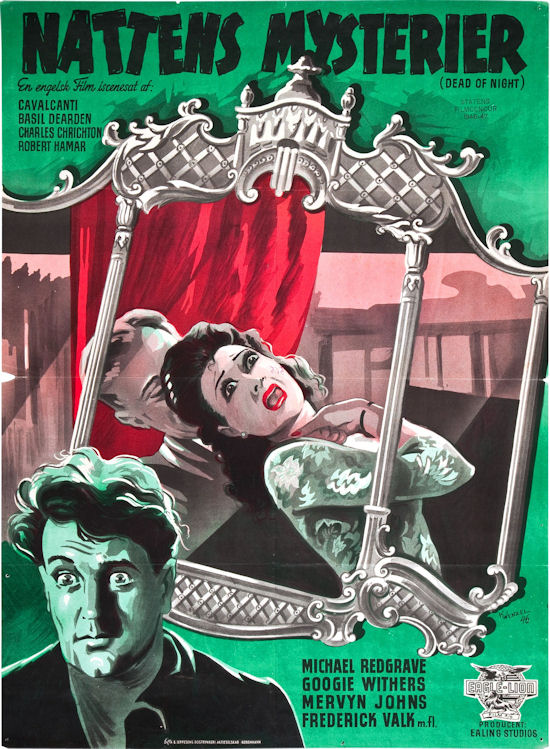