A touching friendship forms between a young army officer tasked with surveying Siberia’s vastness, and a grizzled frontiersman. The howlingly windy steppes and raging rivers are the unforgettable setting for this Best Foreign Film Oscar winner. “The epic simplicity of this film is something that only the subtlest genius could achieve.” (Newsweek).

After the artistic triumph of Red Beard (1965) Kurosawa’s career spiraled into crisis. The Japanese film industry, like the studio system in Hollywood, was in a terminal decline, and Kurosawa’s contract with Toho, the studio with whom he had his greatest triumphs ended in 1966. Like many acclaimed foreign language directors before and since, he was tempted by the flattery and enormous resources of Hollywood. Japanese films were polished technically, but were still made for relatively low budgets (with correspondingly low star salaries) and the studios were primitive by Western standards, the cameras would have been considered antiques in California and the sound stages still had dirt floors. It’s not surprising that Kurosawa received many offers to make films outside of Japan.

All came to naught. The most ambitious, and ultimately, tempting offer came to write and direct the Japanese section of the Hollywood megaproduction Tora, Tora, Tora, about the Pearl Harbor attack. Although much time, effort and money was spent on Kurosawa’s participation, ultimately the autocratic directorial style which had created his Japanese masterpieces proved incompatible with the American system, and he was fired, ostensibly because of fatigue, but more likely because he was considered to be an erratic genius on the lines of Orson Welles or Erich von Stroheim, who could never be profitably constrained by the studio system.

Kurosawa was finally able to make another film in Japan, Dodes’ka-den, but it was a critical and box office disappointment. In 1971, the 61 year old director attempted suicide, convinced that his creative life had peaked. In Japanese tradition, there is no shame or acknowledgement of failure in such an act. Accepting that once the power of one’s art has waned, life should also end, as the two are entertwined, is culturally acceptable.

In 1973 he was unexpectedly given a remarkable opportunity outside of Japan. The Russian Embassy contacted him to say, “Movies in (the Soviet Union) are our only entertainment. We have very poor writers, and directors, and we decided to ask Mr. Kurosawa a favor and ask him to write a Russian story and direct it for us” (Galbraith 507). They were quite surprised that Kurosawa had already thought of adapting a non-fiction Russian work translated into English as In the Jungles of Ussuri but could not figure out how to changing the setting to a Japanese one. The book reminded him of one of his favorite films, Robert Flaherty’s pioneering documentary, Nanook of the North. He was given carte blanche, and the ability, for the first time, to use the 70mm format reserved for epics.

Kurosawa did not care that the Russians were so kind to him because they were hoping for Japanese financial investment in the region, or that, out of a crew of 100, only six were Japanese. There had been some talk that Toshiro Mifune had been considered for the part of the hunter, Dersu. But, Mifune did not want to spend a year in Siberia filming, and was spending a great deal of time making money by appearing on Japanese tv, in order to pay off the debts incurred by his own studio. He cast Maxim Munzuk in the part, instead. Munzuk was the leading actor and co-founder of the Music and drama Theater of Zyzil, the capital of the autonomous republic of Tuva. He was a popular and award winning theater actor, although he appeared in few films. His performance as Dersu is so convincing that one would think that the part had been played by a non-professional local prodigy. Yuri Solomin, who plays the captain, was also a well known stage actor in Russia.

As might be imagined, the filming conditions were quite harsh, with the temperature falling at night to 40 degrees below zero. Kurosawa became ill on several occasions, while spending 18 months filming, and then editing the film in Moscow. The film became a turning point in his career. Although it would begin his career renaissance, at the time, the film was harshly criticized, even by former champions of his work, as being too unlike the films he had made before. Even Donald Richie, who had been the first critic to write extensively about Kurosawa in the west did not like it, because it signaled an evolution from the style which had first captivated him.

Richie, reconsidering his earlier, harsh assessment, finally acknowledges, “…like any Kurosawa samurai, Dersu is superbly competent, attuned to nature, the weather, and the presence of other human beings in the wilderness. Above all he knows how to survive. He lives, as did the samurai at his best, purely by his own code, one not unlike bushido in its insistence on subordination of the individual to a transcendent ideal. Dersu would never verbalize such an idea, again in keeping with the samurai, manner, he merely embodies it” (Richie 200).

Dersu Uzala was shown in Los Angeles to qualify for the Academy Awards before it had an American distributor. It won the Oscar for Best Foreign Film, but as a Russian entry, not a Japanese one. It was then picked up for distribution by visionary schlockmeister Roger Corman, who cleverly realizing the box office potential of the great foreign directors, had distributed films by Bergman, Fellini and Truffaut for American audiences. It was released in 35mm, with monaural sound, rather than 6-track stereophonic 70mm, since no art house was equipped for the larger format, and no standard theater would play it. So, the astounding quality of the photography and sound, so carefully mixed by the director, ws never seen commercially. But, I saw this film when it was finally released in the US in 1977, and I never forgot the power of the images of the Siberian wilderness. “Being able to make a film…with complete creative control restored my spirits” Kurosawa said (Galbraith 506).

Near the end of his career, Kurosawa said, “Films are made up of many elements. Literary, theatrical, painterly and musical. But, there is something in film which is purely cinematic. When I make films or go to see the films of others, I go in hope of experiencing this. I’m at a loss to express the quality in words. I hope one day to make a film in which every moment has that power. Until then, I am only a student (Galbraith 649). 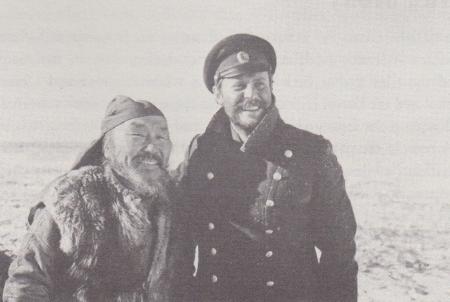