Insurance salesman Walter Neff doesn’t stand a chance after he catches the glint of Phyllis Dietrichson’s ankle bracelet in the chiaroscuro of her LA hacienda.  She entangles him in a murderous policy payoff plot, their fates now linked “straight down the line.” “Noir’s defining movie.” (The Rough Guide to Film Noir). Universal Archive Print.

We end our Fall Film Noir with the noir’s apotheosis, the bitterest narration, the sappiest sap and the baddest bad girl of the genre.  Billy Wilder, not a modest man, had a sense of its perfection from the get go.  One day’s shooting began with the admonition, “Keep it quiet!  After all, history is being made.” 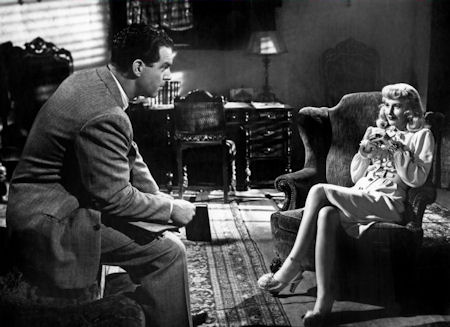 All the major studios were interested in filming James M. Cain’s Double Indemnity when it was published in 1935 as an 8 part serialized novella in the family oriented Liberty magazine. His debut, The Postman Always Rings Twice had made a sensation in the magazine with its lurid depiction of lust and murder in a roadside café.  It had been, in that delicious phrase, been “banned in Boston.”  Supposedly, when Double Indemnity started running in Liberty, magazine circulation increased by 8 million copies.  Prudish Will Hays, who administered the Production Code, found Double Indemnity to be unacceptable from beginning to end, a virtual blueprint for murder.  Joseph Breen, who administered the office cautioned, “I am sure you will agree that it is most important…to avoid what the Code calls ‘the hardening of audiences,’ especially those who are young and impressionable to the thought and fact of crime” (Lally 126). Double Indemnity came out in book form as one third of Three of a Kind, and this time the Hays Office relented as long as some changes were made. Based on pulp fiction, the source material was utterly disreputable, since “serious” films had literary antecedents, but published in book form, the Hays Office opinion softened.

Cain’s inspiration may have been a sordid tabloid murder case from the late 1920s, forever enshrined in yellow journalism when an enterprising photographer snapped a picture of one of the participants, Ruth Snyder, being fried in the electric chair.  Wilder’s usual collaborator, Charles Brackett, found the whole mess too distasteful, and refused the assignment splintering their long standing partnership.  Wilder shrugged, “I don’t think he ever forgave me.  He always thought that I cheated on him with Raymond Chandler” (Sikov 197).  Wilder may have asked Cain to collaborate with him on the script, Cain said he wasn’t asked.

Chandler, fired from his oil company job during the Depression executive began a new career at 44, a writer of hard-boiled detective novels. He had written The Big Sleep and Farewell, My Lovely, both with detective Phillip Marlowe, but he had never written a screenplay.  Wilder loved his slangy dialogue, and his affinity for Los Angeles locations, where Double Indemnity was set.  There would be rather a steep learning curve.  Chandler looked on a Hollywood assignment as a chance to make some real money, but he had no idea how much. He asked for a flat fee of $1000, and said he would have a screenplay in a week.  His agent knew better, eventually, he’d be making $750/week for a minimum of 13 weeks, more money than he had ever dreamed of.

A nine to five writing job was a burden, though, and he loathed collaboration, especially with Wilder, who was in a heavy philandering phase and drank liberally, the alcoholic Chandler was in AA.  Wilder, in turn, hated Chandler’s pipe and his insistence on keeping the windows closed. There was a fundamental attitude difference as well.  Wilder relished the disturbing under currents but Chandler’s hero, Marlowe, was moral and gallant at his core, even as he waded through sleaze.  Instead, he transformed Barton Keyes (Edward G. Robinson) into his crusader.  Chandler said that working with Wilder “was an agonizing experience and has probably shortened my life, but I learned from it as much about screenwriting as I am capable of learning, which is not much” (Lally 130).  The result was spectacular.  Cain said, “It’s the only picture I ever saw made from one of my books that had things in it I wish I had thought of” (Sikov 198).

Both Wilder and Chandler were California outsiders, which perhaps gave such pungency to their sense of California as a place unlike any other.  At first, Chandler thought that he could just transcribe Cain’s conversations from the novel, but it turned out to be “unspeakable” by actors.  Wilder, originally from Austria, and Chandler, from Nebraska but educated in England, created dialogue so quotable, so tasty and right that it makes you wish you were as clever as Walter and Phyllis.
Wilder said Alan Ladd, James Cagney, Spencer Tracy Gregory Peck, Frederic March and George Raft all turned down the part of Walter Neff as being too disturbing. But Wilder really wanted an average Joe, so his descent into immorality would be all the more upsetting. Fred MacMurray was an affable, if colorless leading man in 2nd string screwball comedies like Hands Across the Table, and The Princess Comes Across.  Wilder was the only one who could visualize him as a scheming murderer.  He gave into Wilder’s wheedling to try and get him to take the part, thinking that the studio would nix it to protect his image.  But, the studio thought they would teach him a lesson about asking for a raise, by letting him sabotage his own career.  They both turned out to be so wrong, and it’s certainly MacMurray’s most famous role.

This scrapbooker just cut out MacMurray’s head…it was pasted next to a photo of Stanwyck, so it must have been done exactly at the time the film was released.

Barbara Stanwyck was used to playing bad girls (as in Baby Face) but this particular one was a little low down even for her.  She said to Wilder, “’I love the script and I love you, but I am a little afraid after all these years of playing heroines to go into an out and out killer.’ Wilder challenged her, ‘Are you a mouse or an actress?’ And I said, ‘Well, I hope I’m an actress.’ He said, ‘Then do the part’ And I did and I’m very grateful to him.’”(Lally 135).  Wilder said of her, “She was a terrific performer with great discipline.  She knew her lines, she never muffed, she knew everybody else’s lines!  She read the script once and she had it.  It was very easy to work with her.  She knew what I wanted and she gave it to me in spades” (Lally 135). 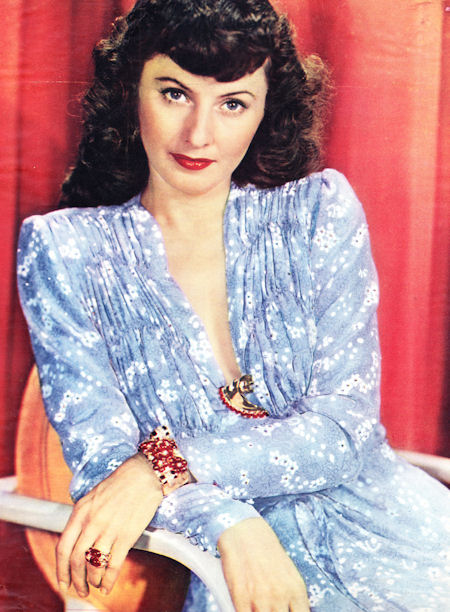 Here is a sexy photo of Stanwyck… 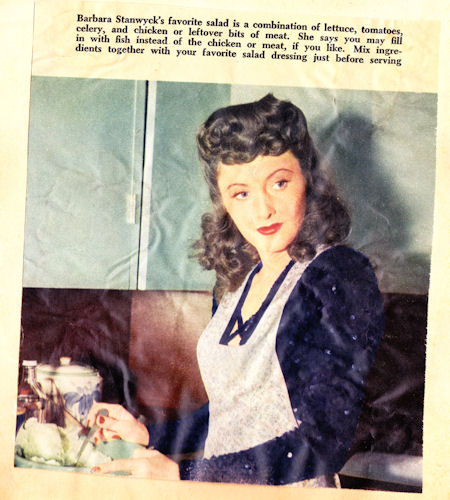 …and here is one spotlighting her cooking. Not such a bad girl after all, right?

Stanwyck said of her role, “That gloomy, horrible house the Dietrichsons lived in, the slit of sunlight slicing through those heavy drapes—you could smell that death was in the air, you understood why she wanted to get out of there, away, no matter how.  And, for an actress, let me tell you the way those sets were lit, the house, Walter’s apartment, those dark shadows, those slices of harsh light at strange angles—all that helped my performance.  The way Billy staged it and John Seitz lit it, it was all one sensational mood” (Muller 58).

The part of Walter Neff’s insurance company boss was a minor one in the book, but the screenplay made him much more of a moral force, and a father figure.  Edward G. Robinson was cast in this pivotal role. He had been a star for more than a decade, and this was his first supporting part, but he felt it was time to make the transition, and the fact that he was paid slightly more than his usual fee help pave the way.

John Seitz’s gloomily atmospheric photography, coupled with set designer Hal Pereira’s interiors created a moody synergy.  For the first time, Wilder evoked his own roots in the German Expressionistic style that would come to define film noir.  He told Cameron Crowe he was greatly influenced by Fritz Lang’s M. The exteriors were real, as Richard Schickel says, “Put simply, the movie has a very firm sense of place—no movie, no documentary or fictional offers a better sense of how the Los Angeles of its moment looked—but at the same time it energizes that reality with a subtle air of menace” (Schickel 10).  The sets were not pristine, the way the smooth Art Deco sets of the 30s were.  When it was time to shoot, Wilder would dirty up the set by turning over a few ashtrays, and blowing aluminum particles in the air to create the dust house of a slovenly housekeeper…quite precisely, a slut.

Edith Head’s iconic costumes get relatively little attentions in her biographies, even the fanciest new one by Jay Jorgenson, in spite of a legendary, lust-inciting ankle bracelet.  Phyllis’ platinum wig continues to be a point of contention, but it does give her an icy gloss.  Many of her clothes are simple, but a tight fitting sweater and skirt go a long way towards making Walter lose control. Head would revisit her costumes when she dressed Steve Martin in them in her last film, Dead Men Don’t Wear Plaid. Miklos Rozsa’s dissonant score upped the tension. The grocery store, based on Jerry’s Market on Melrose Avenue was stocked with real food, which made everyone uncomfortable during the era of wartime rationing. Armed guards were posted to make sure that nobody went shopping on the soundstage. 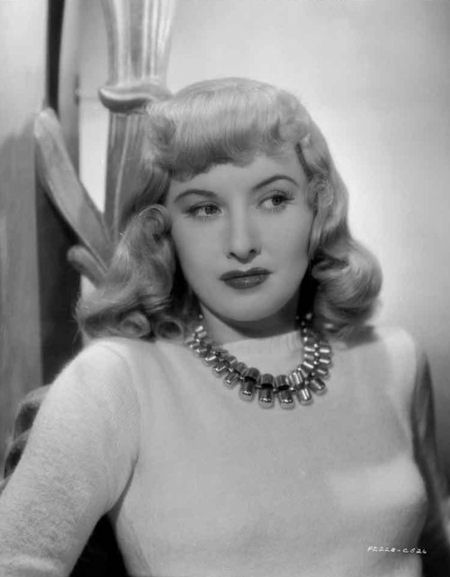 On Oscar night, it was Leo McCarey’s sentimental Going My Way that swept the awards. Double Indemnity was deeply disturbing to the American psyche, a breath of chill air during an era of sentimental wartime propaganda.  Wilder showed “what movies had until then hesitated to admit openly, the anti-romantic possibility that sexual attraction can easily turn into sexual obsession, and that once it does it has a terrible power to victimize and criminalize.  This, of course would turn out to be one of film noir’s great themes, and in a less obvious way, one of Wilder’s great themes, too” (Schickel 20). Once, Billy Wilder said it was his favorite of all his amazing films.  Why? “It has the fewest mistakes” (Schickel 69).