Ninteen year old Basquiat, playing himself, wanders the streets of NYC in this picaresque day and night in the life, evoking a past era of “garbage, graffiti, rubble-strewn lots, unlicensed after-hours clubs and highly idealistic kids eager to make their mark as avant-garde artists and musicians” Dave Kehr NY Times.

During the time when Mayor Rudolph Giuliani was ridding Times Square of the peep shows, the subway of scofflaws and banning the squeegee men, Fran Liebowitz said something to the effect that she did not want to live in a New York City where there weren’t at least a few places the tourists were afraid to go. New York in 1980 was a place where you could move, work a couple of days a week to support yourself, and spend the rest of your time on your art. The trade off: New York City was a genuinely dangerous place. This film evokes this pre-Giuliani Big Apple, with a downtown that is mythologized by those who lived and loved in NYC back in the day.

Jean Michel Basquiat was born in Brooklyn, NY in 1960. His father was from Haiti, and his mother was Puerto Rican. He was precocious academically, and was recognized as a gifted artist from a young age. On more than one occasion he ran away from home as a teen, he was restless and creative. He created a fictional character named SAMO (for Same Old Shit) who made his living selling a fake religion, and he and a high school friend, Al Diaz, began spray painting SAMO slogans on the D Train around Lower Manhattan. There seemed to be no point to finishing high school.

He met writer/director Glenn O’Brien, who was researching an article about this new guerilla art form. They became friends and Basquiat appeared O’Brien’s public access cable show, TV Party, along with Maripol, Edo Bertoglio and Fab Five Freddie. He scraped by making tee shirts and original postcards, one of which he sold to Andy Warhol. When this film was shot, over a few weeks near Christmas in 1980, Basquiat had never painted on canvas or had studio space.

By 1981, he had his first gallery exhibition, and the next year, he was one of the hottest artists on the scene. At 21, he was an art world veteran, formally introduced to and befriended by Andy Warhol. Eventually he had a falling out with Diaz, which led to a series of “SAMO is Dead” graffiti. The downtown art world he frequented was mostly white, but he was not as attracted to the hip hop scenes bubbling uptown. He said “there were not enough black people in this ‘pseudo art bullshit.’”

He sold his work on the street, in the Village, SoHo and outside of MoMA. But, Art Forum’s profile of him, titled “The Radiant Child” by Rene Ricard brought him worldwide attention, and he became the colleague and peer of all the important artists of the day. His interests extended to music with his noise band, Gray. He briefly dated Madonna, appeared in Blondie’s music video of “Rapture” and worked with David Bowie. He had numerous exhibitions and became financially successful.

This film was originally titled New York Beat and was filmed as a slightly fanciful version of reality. It’s a hybrid, part fact and part fiction, “Penniless, Jean-Michel was kicked out of his apartment, then tried to sell his paintings for daily income. He showed up at clubs and tried to pick up girls to go to her apartment to have someplace to sleep. Basically, it was based on his real life.” (Taka Kawachi (ed.) King for a Decade: Jean-Michel Basquiat. Kyoto: Korinsha Press, 1997). During filming Basquiat lived and painted in the film’s production offices. The fee he was paid for the film allowed him to buy art supplies, and the space in the production office allowed him to paint seriously for the first time.

On his cinematic quest, he wanders in and out of legendary clubs, sampling the music of Blondie’s Deborah Harry, and other leading bands of the era including James White and the Blacks, DNA, Tuxedo Moon, the Plastics, and Walter Steding and the Dragon People. Also heard on the soundtrack are rap legend Melle Mel, John Lurie, Lydia Lunch, Suicide, Vincent Gallo, Kenny Burrell and Basquiat’s own band, Gray. There is a lot of screen time devoted to one of my all time favorite bands, Kid Creole and the Coconuts, who I never saw perform– for me, this is the highlight of the film. The many exciting bands in this film virtually define the New Wave music of the 80s, CBGB’s, Mudd Club and all the other places I wished to go, but honestly, would have been scared to go at the time.

“Production problems” meaning that the backer ran out of money, halted filming and New York Beat was not completed. Various sections were lost and later found. Post production was begun in 1999 and completed in 2000, including dubbing by Saul Williams of a voice for Basquiat, who of course was long departed. Although Basquiat’s voice is recreated, the music, taped on site, is real. The film was produced by Maripol, the art director and stylist. She plays “fashion designer” in the film was the design director of Fiorucci (who helped bankroll the film) the influential clothing company whose look helped define the 80s. She was also a stylist for some of Madonna’s most eye-catching looks, including for “Like a Virgin.” Maripol still handles the distribution of the film, and occasionally introduces it in venues with a larger budget than ours.

When I saw this for the first time, I had just screened a film for Full Frame on 80s street fashion as seen in the Village Voice. In On The Street, they discussed their lives during this fertile creative period, but in Downtown 81, here they are as they were 30 years before.

Basquiat’s meteoric rise through the art world did not eliminate his appetite for drugs, which was compounded by his depression over Andy Warhol’s death. He had always been fascinated by artists who died too young, especially Jimi Hendrix and Janis Joplin who both died of drug overdoses when they were 27 years old. He died, tragically, of a heroin overdose of his own at the age of 27 in 1988. He has had major museum retrospective shows of his work, and the top auction price for one of his works, according to Wikipedia, is over $14 million. His friend, Fred Braithwaite eulogized him, “ Jean Michel lived like a flame. He burned really bright. Then the fire went out. But the embers are still hot.”

Although we could have shown the 1996 biopic, Basquiat, directed by artist Julian Schnabel (with whom Basquiat shared gallery space) starring Jeffrey Wright as the artist, or the recent documentary The Radiant Child, I decided that rather than a fictionalization, or a hagiography, it was better to show the real deal. 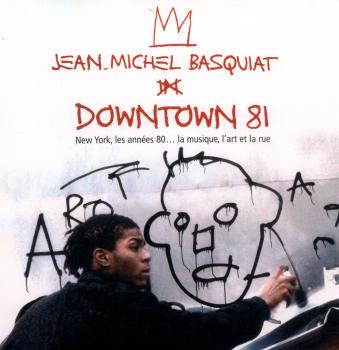 Sources include the Downtown 81 website, Wikipedia and the Basquiat estate website. All are rather chaotically organized and sometimes contradictory.

The Basquiat page on Artsy.net has essays, image links and gallery information.