Barbara Novak, an ambitious career gal in 1962 NYC seeks to prove that women can have carefree sex, just like roué Catcher Block. Raleigh’s Reed crafts a bubbly Technicolor love letter to comedies like Lover Come Back, and Sex and the Single Girl. “I love this film” (Richard Roeper Ebert and Roper) Fox Archive Print.

Before there was Mad Men, there was Down With Love, Peyton Reed’s affectionate ode to mid-century Manhattan.  The romantic sparks fly between Rene Zellweger and Ewan McGregor, with David Hyde Pierce playing the Tony Randall role…but wait!  There’s Tony Randall, too.  Sadly, Raleigh native Reed’s schedule doesn’t permit him to introduce the film, but he sends his regrets, “I do hope you know how sad this makes me. The fact that the movie will be screening in Raleigh at the museum without me being there just kills me.”

Why is it so hard to make a good romantic comedy these days?  Andrew Sarris famously described screwball comedies as “sex comedies without the sex” and that rule held pretty well from the 1930s—the 1960s.  Today, with people much less inhibited about such matters, it takes a pretty deft writer to keep an attractive couple out of bed long enough for romance.  Peyton Reed, in Down With Love, looks back to the day when these moral codes were just beginning to erode, leaving plenty of psychic space for flirting.

The book Down With Love written by the character of Barbara Novak is clearly based on Helen Gurley Brown’s 1962 bestseller, Sex and the Single Girl, which was made into a dreadful, leering movie starring Natalie Wood and Tony Curtis (although they are adorable as a couple).  Dated though it is in many ways, Brown’s basic advice, which still holds true, is that you have to love yourself before you become loveable.  “Marriage is insurance for the worst years of your life.  During your best years, you don’t need a husband” she asserts.

She does like to set the stage, however.  Among her rules are “Roomates are for sorority girls” “You must cook well”  “Fashion is your power ally” but most importantly, “You must have a job that interests you.”  She thinks you should surround yourself with men, whether marriageable or not, including gay men, so you don’t feel deprived of the masculine companionship that could lead to a  marital decision made in desperation.  And, she absolutely believes in having fun.
“No girl is ready for marriage, I believe, until she has weathered the rigors of a romance with a Don Juan.  It’s part of her training.” Clearly, Ms. Brown would have been game for Catcher Block. And, she does not believe in going Dutch.  A man’s job is to pay for everything (and then some) and if he chafes at your not being forthcoming sexually (and it’s completely your choice) you can always say you’re saving it for your wedding night—there is never any argument on that subject. 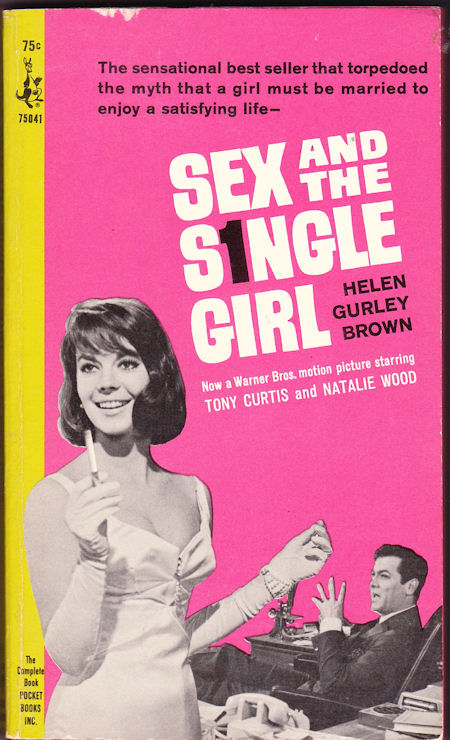 The book is full of practical advice, as well.  Budgeting, shopping, clothes and make up, decorating your single girl flat, cooking—and dieting.  When to spend and when to spurge.  Never undertip, even if you are pinching pennies—it’s beneath you. Brush your teeth with baking soda, and never spend your own money on drinks.  Here’s her prescription for a great cocktail party:

“Give the party in a small space and pack the people in.  Never be afraid that you’ve asked too many.  Play Rumanian gypsy music (interspersed with a little Perez Prado) to brighten the intimacy and drama.  Serve gobs of weak martinis which you have made up beforehand and stored in the icebox.  A constantly circulating martini pitcher creates a feeling of well being and good fellowship in guests.  Let any two friends bring hors d’oeuvres—deviled eggs, clam dip, guacamole, or whatever they wish.  Praise them lavishly. Never let anyone contribute liquor.  Don’t ask any but charming and attractive people.  Lump the lugubrious and hostile together on another occasion and pack them all off to the movies.  Invite plenty of single people.” Yes, yes!  I want to go!

The bottom line:  “Career girls are sexy.  A man likes to sleep with a brainy girl.  She’s a challenge.  If he makes good with her, he figures he must be good himself.” Brown has lots of advice on having affairs, her most returned to point is to expect very little from married men, but encourages women to enjoy themselves.  “Nice, single girls do have affairs, and they do not necessarily die of them.  They suffer sometimes, occasionally a great deal.  However, quite a few “nice” single girls have affairs and do not suffer at all!”  Interestingly, she also has a paragraph “Suppose you like girls” She says she can’t really be very helpful in that department, but says, “At any rate, it’s your business and I think it’s a shame you have to be so surreptitious about your choice of a way of life.” 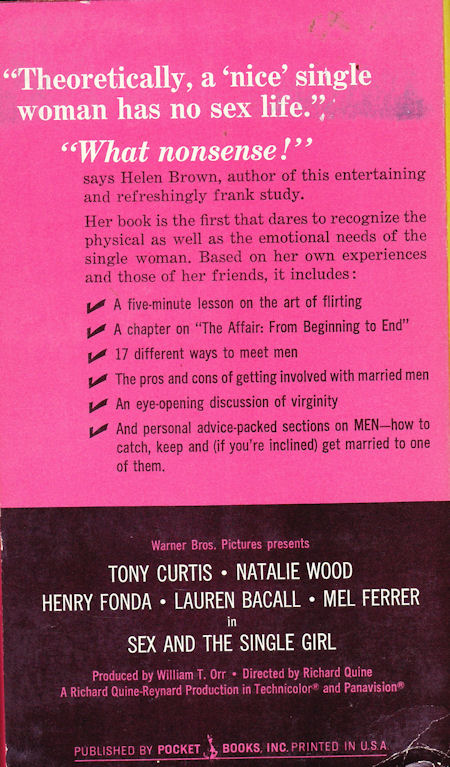 Brown writes with lots of exclamation marks and italics, with a cosy “just us girls” tone, but I have to say you can do a lot worse for paperback relationship advice.

Reed adores films like Lover Come Back which we showed a couple of weeks ago, (on the phone, he told me that Boys Night Out, with James Garner, Kim Novak and Tony Randall was another big influence)  but has given it a 20th century tweak. He’s got the Manhattan fantasy, with the mid century sleek apartments: 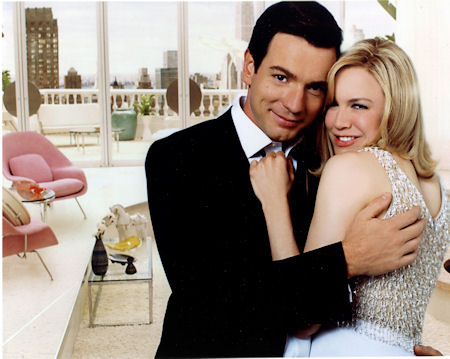 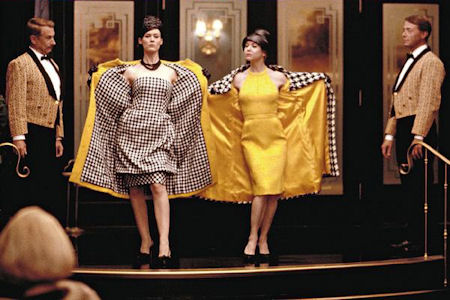 which I, for one, still long for, perfectly envisioned.  Down With Love is a complete pleasure; a knowing modern comedy with a retro, just for fun flair.

Here is the introduction Peyton Reed sent for me to read before the screening at the NC Museum of Art. Posted with his permission:

“I want to thank you all for coming tonight. I can’t tell you how much it means to me to have DOWN WITH LOVE screened in my hometown, and at the North Carolina Museum of Art, no less! I’m very grateful to Laura and everyone at the museum for including my movie in their excellent “Mad About Mad Men” film series. I’m truly bummed that I can’t be there.
It’s hard for me to believe, but it was 10 years ago that we were just starting to shoot DOWN WITH LOVE! Looking back on it now, it feels like a minor miracle that such an oddball film got green-lit at a major studio. The script, beautifully written by Eve Ahlert and Dennis Drake, was an homage to the sex comedies of the late fifties and early sixties. It was designed to look and feel as if it had been made during that period. It was an incredibly dense script, both verbally and visually.
And it was far from being a “sure thing” from a studio executive’s point of view.
My first film, BRING IT ON, was a competitive cheerleading comedy. After it came out, I was sent every competitive jump-roping, marching band, roller skating, hot-dog eating, poetry slam script out there. This is how Hollywood works. But I wanted to do something different. I still wanted to do a comedy, but hopefully something unique and visually challenging.
Then I read DOWN WITH LOVE. The producers, Dan Jinks and Bruce Cohen, were coming off an Oscar win for AMERICAN BEAUTY. They had nurtured this script and were looking for someone who shared their enthusiasm for it. I did, and quickly signed on. From there, I was very fortunate to assemble an extremely talented group of actors and craftsmen to help bring the story to life.
The first order of business was to find our Barbara Novak — and Renee Zellweger was perfect for the role: cute, blonde, tough, smart and comedically skilled. We screened the key Doris Day movies, PILLOW TALK and LOVER COME BACK, and many others. Renee dove into the role, researching the period and weighing in on her wardrobe, hair and body language. She was tireless.
For the crucial role of “ladies’ man, man’s man, man about town” Catcher Block, we had a very short list. And Ewan MacGregor was at the top of it. I had been a fan of his since TRAINSPOTTING, and he seemed like the kind of actor who was game for anything. I happened to be at a party one night for MOULIN ROUGE, and had had enough to drink that I went up and introduced myself to him. I told him about our movie, that Renee was attached and that we were looking for the male lead. “Is there any singin’ in it?” he asked in his trademark Scottish brogue. “There could be…” was my buzzed response. This explains the closing musical number.
Our cast was rounded out by David Hyde Pierce, in what would’ve been the Tony Randall role back in the day. David is one of the funniest, most specific actors I’ve ever worked with. His performance is like ballet crossed with a Warner Brothers cartoon. I love him in this role. And Sarah Paulson, whose audition blew us all away, was perfect as Barbara’s editor, Vicki Hiller. She got the tone and rhythm immediately and felt like a young Paula Prentiss.
Last, but absolutely not least, was Tony Randall himself. Though the role of Theodore Banner is a small one, it is crucial. For me, Tony was our direct link back to those original movies (in addition to being a comedic genius, of course). It was hard getting any work done the day he was with us. All I wanted to do was sit around and ask him questions. He was 83 when he did the movie. He was 84 when he died. It was an honor to have worked with him.
Behind the camera I had the immense talents of production designer Andrew Laws, costume designer Daniel Orlandi and cinematographer Jeff Cronenweth. The sets and wardrobe are mid-century design at their best — that period when the fussier 50s are giving way to the zoomier 60s. And Jeff’s anamorphic photography (very different than his darker work with David Fincher) is something to behold. Marc Shaiman’s score pulls it all together and pays homage to everyone from Mancini to Gershwin to Frank DeVol.
We tried to pack every corner of every frame with period specific props: from cars to cigarette lighters to telescopes to old Marvel comics. My one regret is that I wanted Ewan whistling THE ANDY GRIFFITH SHOW theme in one scene, but we couldn’t afford it. Oh well…
The movie was released by 20th Century Fox in May of 2003. The studio decided to release it as counter-programming on the same weekend as THE MATRIX RELOADED, one of the most eagerly anticipated sequels of all time. I think even I went to see THE MATRIX RELOADED that weekend. Needless to say, we didn’t exactly set the world on fire at the box office.
I am incredibly proud of this movie. I’m very glad you’re getting a chance to see it on the big screen. And I truly hope you enjoy it. Thanks so much for coming, and I’ll see you soon! Peyton”

Sources include Sex and the Single Girl by Helen Gurley Brown, personal communication from Peyton Reed.