An alcoholic physician laboring in a post-war Tokyo slum treats a volatile gangster, fatally ill with TB. Kurosawa and Mifune’s first collaboration is this unforgettable film noir, set amidst a squalid urban swamp symbolizing Japan’s national despair. “I wanted to take a scalpel and dissect the yakuza” (Akira Kurosawa).

Japan was practically obliterated during WWII, not by the atom bomb, but by the fire bombs which destroyed their history, their architecture, and their families. At the end of the war, many Japanese expected the Emperor to order everyone to commit suicide, “The Honorable Death of the Hundred Million” rather than be invaded by the Allies. During the war Kurosawa was exempt from military service, and, promoted from assistant, began his career as a director making films the censors could pass as being beneficial to the war effort, nationalistic stories depicting positive cultural traits. Toshiro Mifune spent the war as a still photographer in the air force. Near the end of the war, he trained 15-16 year old boys to attack when the allied invasion came. Always opposed to military discipline, he taught them to say, not banzai (Long Live the Emperor) but okaasan (mother).

After the war, Mifune hoped to become a cinematographer. But, there was no place for him at any studio. A photographer he knew suggested he join a New Faces competition to become an actor; it would be easier to transfer to another department once he was already employed by a studio. His audition at Toho did not go well, but Kurosawa, on the judges panel, was captivated by the anger Mifune could summon for the audition. Eventually, even though he was thought to be “something of a roughneck” he was one of the 16 men and 32 women hired from a pool of 4000 applicants. Kurosawa had been collaborating on a script for a gangster film called Snow Trail. The film’s director couldn’t find the actor he wanted to play the most menacing of his trio of criminals. Shooting was delayed, and finally he observed a “mean-looking guy” on a train, and said he wanted someone like him, only to be told he was already under contract to the studio. But, Mifune balked at the prospect of working as an actor, even though he had been training at the studio for months. “I don’t want to have to rely on my face to make money” he protested, and that he was only waiting for a space to open up in the camera department. But, Taniguchi, Snow Trail‘s director, was thrilled by Mifune’s fierce physicality, especially since the mountain shoot promised to be rather arduous. He got top billing in his first film, which had been co-written and edited by Kurosawa, and in which he co-starred with Takeshi Shimura, clearly the die had been cast. (Galbraith 82).

Drunken Angel is Kurosawa’s first major work, but not his first film seen in the West; it did not reach the US until 1960. For the first time he did not have to comply with military censors, Occupation censors, or the powerful trade unions. “In this picture, I finally found myself. It was my picture. I was doing it and no one else” (Galbraith 91). Japanese critics considered it to be the equivalent of the breakthrough Italian postwar neorealistic films, like Paisan or Bicycle Thieves. To watch it today is to experience a little of the chaos, optimism and despair of the immediate postwar period in Japan.

The film was designed around a set that had been built for another film, These Foolish Times. Originally, the yakuza gangster had been contrasted with a young, humanitarian doctor, but the doctor’s character was so perfect, he never came to life on the page: he needed a vice to make him real. While doing research, they heard about an unlicensed, alcoholic doctor working in the slums, and realized this made for a much more interesting contrast. Kurosawa had Taskeshi Shimura base his characterization on Thomas Mitchell’s drunken physician in John Ford’s Stagecoach. Both the doctor and the gangster are plagued by self-loathing, and they are film noir doubles, the way Mifune’s cop and the thief he pursues in Stray Dog would be, as well. They are linked visually and thematically, in their diseases and their essential loneliness.

“Shimura played the doctor beautifully, but I found I could not control Mifune, When I saw this, I let him do as he wanted, I let him play the part freely. At the same time, I was worried because, if I didn’t control him, the picture would turn out differently from what I’d wanted. It was a real dilemma. Still, I did not want to smother that vitality. In the end (even) though the title refers to the doctor, it is Mifune that everyone remembers” (Kurosawa in Galbraith 95). At a time when heroes in Japanese movies were refined, perhaps even effeminate, by Western standards, Mifune’s raw emotions struck Japanese audiences much as Marlon Brando would in A Streetcar Named Desire (1951). The difference was that Brando’s Method acting was carefully thought out and constructed, and Mifune’s was from the wildness of pure instinct. The result on screen is similar, though. The first of the many fruitful collaborations between director and star was an explosive one.

Even the tut-tutting analysis in Films in Review admitted, “In several brilliantly photographed close-ups Mifune’s face can be seen to be one of the great faces of the screen.” 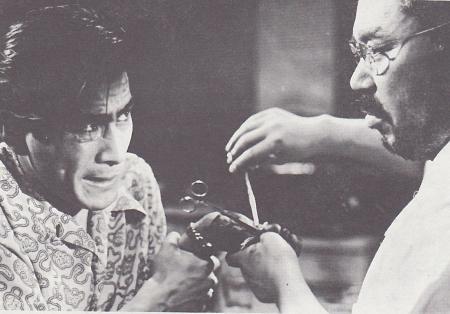