A beautiful countess rummages amongst her jewels to find a bauble to pay her debts. Thus, a pair of diamond earrings begins a journey, their worth fluctuating depending on their sentimental value to their owners. Ophuls’ elegantly swirling camera is pure seduction. “The greatest film of all time” (Andrew Sarris).

Max Ophuls was born in Germany in 1902, and changed his name from Oppenheimer to spare his well-to-do Jewish textile manufacturing family shame when he became an actor. His home town was near the French border, so he grew up speaking both languages. His acting success was mediocre, but he became a well-known director of plays, and then began directing films at the studios of U.F.A. in 1930. Soon after a film version of Arthur Schnitzler’s Liebelei became a success in Germany, the burning of the Reichstag forced Ophuls into exile in France. He made a number of films there but was forced to flee once again, eventually arriving in Hollywood with his wife and son, Marcel, who would grow up to be the acclaimed director of the documentary The Sorrow and the Pity. Ophuls was unemployed between 1941 and 1945, but remained socially connected within the large émigré colony there and always felt he was near to making a film, so he said the time passed quickly. He then made 4 major films in quick succession; flops at the time, but now highly regarded, including Letter from an Unknown Woman, starring Joan Fontaine and Louis Jourdan. In 1949, he returned to France, where he had his greatest successes, La Ronde, Le Plasir, The Earrings of Mme. De… and Lola Montes. The last film had an enormous budget and aroused great critical interest, but was taken out of his hands and butchered in the editing room. It was a commercial failure and Ophuls died shortly afterwards at the age of 55.

“Madame de…” was a novel written by Louise de Vilmorin, about the transformation of a “frightfully coquettish” socialite to the victim of a tragic amour. The book is scant 54 pages in its English translation. There are only three unnamed characters; the time and place are unspecified. The book itself is rather like a jewel, its touch gossamer, and tone lightly ironic. Madame de “was original in all her ways; she made the commonplace seem rare, and she always did what nobody expected.” Louise is the named heroine of Max Ophuls film, a nod to the fact that the heroine of de Vilmorin’s novel was in part a self portrait. It depicts not young love, but that of older characters who should know better than abandon themselves to a passion that cannot be resolved. The screen writers added a dramatic conclusion absent in the novel, although they omit the final irony, where Madame de’s husband and lover each keep one earring. The time frame was transposed to Ophuls beloved Belle Epoque, although it is more of a pastiche between that era and a style best described as 1950s Rococco. The turn of the 20th century evokes the peace and prosperity before the first World War, also meant to echo nostalgia for Pre-Nazi Europe.

Charles Boyer and Danielle Darrieux had played the romantic pair in Mayerling (1936) a popular film based on a true life tragic love story. Charles Boyer was a big Hollywood star. He came to MGM in the early talkie days to make French language versions of popular films, and stayed on to make such successful films as Conquest, in which he played Napoleon opposite Greta Garbo; the English remake of Pepe le Moko, Algiers, with Hedy Lamarr; Love Affair ( the original version of An Affair to Remember) with Irene Dunne; and as the devious husband trying to drive wife Ingrid Bergman insane in Gaslight. This was Boyer’s return to French films after fifteen years in Hollywood, and it was the last great film of his career, “never again would he make a picture that approached the spellbinding Madame de…in any measure of art of craftsmanship, in any language” (Swindell). His elegant performance is the film’s highlight; his expression when the diamond earrings disappear after a long absence the high point of Madame de… 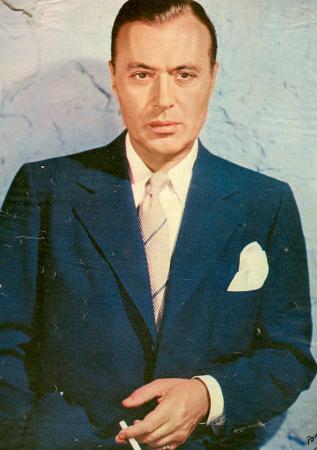 A publicity photo of Charles Boyer from the early 1940s

Darrieux made her first film in 1931, and is still working! She is the voice of the grandmother in Persepolis, which opens today (February 8, 2008). She began as an ingénue, and progressed to play chic women of the world, as in this film, and has continued into matriarch roles. She is considered by many to be the essence of French femininity. She returned to films only after the War, after being marked for excecution by the Resistance for entertaining the Nazis, but she was exonerated. This is, perhaps, the reason for “a maturity and melancholy hidden behind her perfect features” (Kehr). “With her upswept hair, bare shoulders and impeccable posture, she blossoms from her gown like a single tulip in an Art Nouveau vase. Ophuls famously directed Darrieux to ‘incarnate a void’ and one of this movie’s great shots makes this literal” (Hoberman). 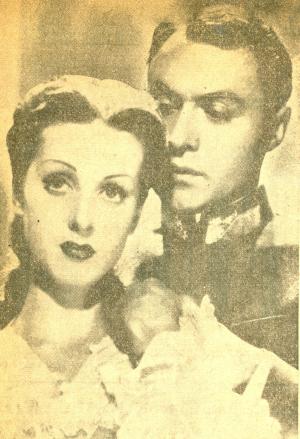 Darrieux and Boyer in Mayerling

The Baron was played by Vittorio de Sica. De Sica He had been a matinee idol in the 1930s, “the Italian Cary Grant” in what were called the “white telephone films” as Italian cinema attempted to recreate the gloss of Hollywood moviemaking. He is better known today as the director of a heartbreaking trilogy of neorealistic films after World War II, Shoeshine, Bicycle Thieves, and Umberto D, my candidate for the saddest movie ever made. As with other maverick directors, like Orson Welles and John Cassavetes, he sometimes financed his directing projects by acting.

Ophuls made 21 features in 5 countries in 25 years, all stylistically similar with an emphasis on sweeping tracking shots. His films have few close-ups or use of montage. Richard Roud quotes actor James Mason, who acted for him in Hollywood:

I think I know the reason why
Producers tend to make him cry
Inevitably they demand
Some stationary set-ups, and
A shot that does not call for tracks
Is agony for poor dear Max,
Who, separated from his dolly,
Is wrapped n deepest melancholy.
Once, they took away his crane,
I thought he’d never smile again…

Ophuls’ subjects are women unhappily in love, and their plush surroundings are fin de (19th) siecle. His films are stuffed with baroque décors “cages, mirrors, staircases (there are sixty shots of staircases in Madame de…) laces, gauzes, hanging chandeliers. This heavily charged decorative style is not to everyone’s taste, and there are films in which one gets the impression that everything is being seen through yards of tulle” (Roud). The camerawork, by Christian Matras, “is breathtaking, in particular the directors endless tracking shots sweeping along with the characters and conveying their restless, frenetic existence as they dress, dance, love, duel and finally die” (Paris).

“This is a world of Ophuls’s imagining: an artificial world, filled with extraordinary objects, ruled by a strict code of decorum and lived through ritual gestures and in grand manners. It belongs to a time when appearance was everything, when the surface was more significant than what it disguised, that time before a true Viennese, Sigmund Freud, threw open the doors and let the secrets out” (Kehr).

Although Ophuls spent only a few months in Vienna, the city captured his imagination. “Even when his stories unfold in other countries, they seem to be rooted in some Vienna of the imagination, at the unchanging turn of the last century: a place where the bindings of good conduct can shape you as gracefully as the bodice of a new dress, even if the pressure means that, as the days wears on, you find it impossible to breathe” (Lane).

In order to write these film notes, I watched a disintegrating video tape, made from a dim and scratched film print. The company logo was written in “Pac-Man style” graphics, before the advent of computer type fonts, giving a hint of how old it was. Janus Films forthcoming DVD restoration of this film is long overdue.

For François Truffaut, for whom Ophuls was second only to Renoir as his favorite French director, “Women are the principals in Ophuls’ work, the hyper-feminine woman, victim of every kind of man—inflexible soldiers, charming diplomats, tyrannical artists, idealistic young boys, etc. Because Ophuls treated only this eternal subject, he was accused of being out of date, anachronistic. He showed the cruelty of pleasure, the trials of love, the traps of desire in his films, he was the director of “the sad tomorrow that follows the sprightly ball” (Victor Hugo). 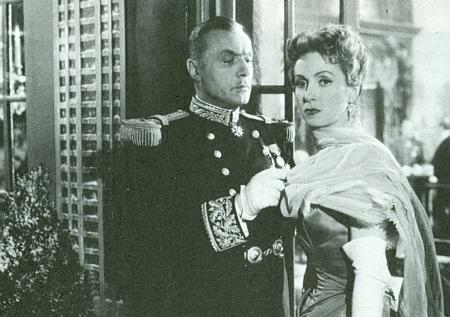 Production still from Paris, portrait of Boyer and newspaper photo from Mayerling from anonymous movie star scrapbooks. Sources include: Madame de by Louise de Vilmorin, translated by Duff Cooper, Max Ophuls: An Index by Richard Roud, Ophuls edited by Paul Willemen, The Great French Films by James Reid Paris, The Cinema of Max Ophuls: Magisterial Vision and the Figure of a Woman by Susan M. White, Films of My Life by François Truffaut, “Follow the Earrings and Find the Mystery Woman” by Dave Kehr New York Times 3/11/07, “Girl with a Diamond Earring” by J. Hoberman, Village Voice 3/14/07, “Master of Ceremonies” by Anthony Lane, The New Yorker 07/08/02, “Charles Boyer” by Robert A. Monsees May, 1971 Films in Review, Film Encyclopedia by Ephraim Katz, Charles Boyer: The Reluctant Lover by Larry Swindell.