An obsessive love for the few movies allowed during China’s Cultural Revolution forms a powerful bond between two small town youngsters. This debutante feature by a female director is, “Enthralling…evokes the world experienced by two children who are so close that they are able share the same enchanted fantasy.”—New York Times.

Electric Shadows, a film that never had a theatrical release here, caught my eye in the video store with the tagline, “The Chinese Cinema Paradiso.” One thing that has always interested me about the movies is that some people fall madly in love with them. I’m sure everyone in the audience here has their favorites, and you may even consider yourself an expert on them, unlike painting, or symphony music, or any of the other so called “fine arts” which seems to demand knowledge in excess of spectatorship. And, the democracy of cinema is one of the things I like about it. I never deny you your right to your opinion, as long as you honor mine.

This film is about China during the Cultural Revolution, a time when few films were permitted by the government. Yet, for the characters in Electric Shadows, the love for the movies is so strong,even if you are only allowed to see a dozen movies, those are the dozen movies you adore. Is it the individual movies or the experience of movie going that is so powerful?

Director Xiao Jiang was born in 1972, like her heroine, Ling Ling. She, too was entranced by the outdoor movie showings that were the main form of entertainment in Mao’s China, before television or even telephones were common in the provinces. The director adored Drama Club in college, and realized she wanted to make the arts her career after starring in a play described as if it was the old warhorse, “Sorry Wrong Number.” She took a written exam to qualify for one of the three open places in the Beijing Film Academy for a would-be director. She found that the curriculum was focused on European masters, “The heavier the film, the more they liked it. I distanced myself from this fashion.” One professor encouraged her to be mindful of her own interests, and those of her potential audience, and for her first feature, she decided to look back on a historical moment when all of China was movie crazy, before tvs, and VCR destroyed the communal nature of film going.

The films featured here were real films permitted in China during the Cultural Revolution, and many of them seem to be made in a Soviet-style Socialist Realism. Russia and China had close ties, in part because Soviet Russia offered the most prominent model of a non-Capitalist economy, but also because they had never colonized China the way other Western countries did, so there was no history of oppression by them. The official films consumed in the time period of the childhood of the characters in the film often featured heroic women characters. Mao Zedong was close to his mother, which some have thought inspired him to try and free women from centuries of feudal oppression, even as his rebellion against his father brought his revolt against authority to the world stage.

The main films referenced are Street Angel (1937) which was released just before Shanghai fell to the Japanese. It’s about a poor teahouse singer who struggles against being forced into prostitution. Banned during the Cultural Revolution (although beloved in memory) it retains its popularity and is still distributed in China. Railway Guerrillas (1956) is an adventure movie about the anti-Japanese resistance, and its fast paced action sequences on moving trains made it a children’s favorite. Shining Red Star (1974) is typical of Maoist propaganda during the Cultural Revolution. The boy hero who fights against Japanese invasion was meant to be a role model. The Back Alley (1981) the last film shown at the outdoor cinema in Electric Shadows was a romance done in an experimental style with three different endings, popular not for its radical style but for its break with Maoist propaganda traditions.

Other permitted films include Little Soldier Zhang Ga, another film about a boy hero of the anti-Japanese resistance, and two of Mme Mao’s model revolutionary works, The Red Lantern (1970) and Red Detachment of Women (1971). Victory Over Death was an Albanian film, permitted because of the Communist sympathies of this Soviet satellite nation.

There are liberated women characters, too, who seem to catch the fancy of the film’s heroine. You’ll note the heroine’s refusal to be subservient to her mother, a violation of the strict Confucian doctrine of honoring your parents above all other duties. The director, in her gentle depiction of societal dysfunction during the Cultural Revolution, disobeys the stricture against jia chou bu ke wai yang, “washing dirty linen in public.” Yet, since the strict censorship process in modern day China includes submission of a script to the censorship bureau before filming begins, as well as a review of the finished product, the government’s approval is required. Electric Shadows evokes a moment in recent history, and as fond a memoir of the devastating Cultural Revolution one is ever likely to see. 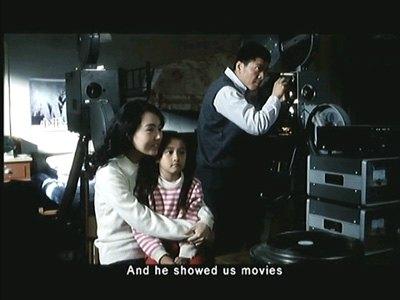