Marion Davies plays a pert flapper who fancies herself the Cleopatra of Riverside Drive because she is dating six Harvard seniors. Her frustrated father, inspired by a production of The Taming of the Shrew, enlists a handsome actor to “Petruchio” his pampered daughter, Ethel.

Davies was a spritely and popular star of the 1920s, either because of, or in spite of, her famous patron, media mogul William Randolph Hearst. Sadly, her artistic reputation was sullied by Orson Welles’ Citizen Kane. Welles repeatedly denied that the shrill harpy Susan Alexander, Charles Foster Kane’s mistress, was based on Marion. He wrote the introduction to her autobiography, The Times We Had refuting the similarities and called her, “one of the most delightfully accomplished comediennes in the whole history of the screen.” (He also denied Charles Foster Kane was based on Hearst.) Hearst tried to destroy Welles’ film, supposedly more for the aspersions cast upon Marion than on himself. But, even without Citizen Kane, there had always been snickering over the enormous budgets Hearst lavished on his lover’s films and the gushing “Marion was never lovelier” reviews in the Hearst press. But, let the record show that Hollywood history is littered with the failed careers of mistresses who were promoted as great stars to a public who rejected them. Marion’s success proves that her celebrity was not a manufactured one.

Hearst initially became interested in films for propaganda purposes. Patria (1917), starring dancer Irene Castle, dramatized one of Hearst’s obsessions; a Mexican-Japanese plot to overthrow the U.S. government. In 1914 Japan had became an Ally of the US in WWI and Hearst’s pro-German leanings permanently scuttled his political ambitions. Marion Davies was not his only star, and Cosmopolitan Pictures was not exclusively her production company. His first film with Marion was Cecilia of the Pink Roses (1918) although she’d made one prior film, Runaway Romany.

Enchantment, her 11th film, is a domestic comedy, a popular genre in the 1920s. Short on action, it is a character study relying on the gossamer comedy skills of Marion and Tom Lewis and Edith Shayne as her parents. I’m constantly amazed at the continual criticism of silent film acting, sometimes by people who ought to know better. The performances in this film are as accomplished as those much later in the 20s, and Marion is quite amusing. The décor in this film is perhaps its greatest contribution to film history. Acknowledged as the first “modern” setting of an American film; the influence is Wiener Werkstatte rather than the later Art Deco style. The production design, meaning lighting, set and costume design and even makeup was by the dynamic Joseph Urban. 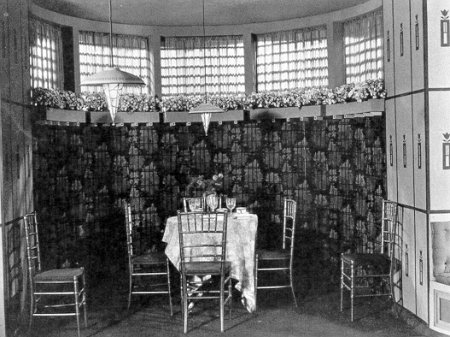 Urban was born in Vienna in 1872. He designed his first stage sets in Austria and Germany in 1906. Settling in the US, he was invited by Florenz Ziegfeld to design the 1915 Ziegfeld Follies. From 1920-25 he was the production designer for Hearst’s Cosmopolitan Pictures. He was reluctant to work in films, partly because it was still somewhat of an upstart medium, and partly because his design forte had always been color, and he would have to design in black and white. But Hearst offered him so much money, (and allowed him to continue to design for the Metropolitan Opera and the Follies) that he couldn’t refuse. When his contract expired, his Hearst money allowed him to fulfill his dream of opening his own architectural studio. Urban did the Follies until 1931, also designing such historic Ziegfeld productions as the original Show Boat. He was a principal designer of Mar-a-Lago, Marjorie Merriweather Post’s Florida Xanadu (now owned by Donald Trump) and other Palm Beach landmarks. His lavish theater interiors, often using “Urban Blue,” similar to the intense color used in the skies of Maxfield Parrish’s paintings, were much admired. The New School, in New York City, is one of the first U.S. buildings done in the International Style and is considered to be his architectural masterpiece.

In 1921, art directors rarely received screen credit, and sets were often designed and built by studio carpenters. Urban’s reputation was so great, his name was used as an attraction in the ads for Enchantment. As Dale McConathy and Diana Vreeland write in Hollywood Costume: Glitter, Glamour, Romance, “Hearst and Urban had a great deal in common. Both were eclectic in their tastes, both extravagant, and both charmed by the eroticism of women presented in splendid costumes and settings. Urban’s genteel use of nudity and his pilferage of every period for gentlemanly prurience were much to Hearst’s liking. The designer represented the same sort of manic appetite that had put together San Simeon, Hearst’s pleasure dome, which–with Hollywood–was to become a symbol of California imagination and of American lifestyle.”

Hearst and Urban created a gorgeous setting to enhance Marion’s allure, rather than just dressing a set. “While most cinematic history came to be written in terms of the narrative, there was an alternate esthetic history, always inherent in the medium, that began to develop definite patterns during this period.” (McConathy and Vreeland). Every luscious detail, the luminous sheen and sparkle of Marion’s extravagant wardrobe, and the meticulous unity of painted decoration, lamp and cushion, are almost tactile in the brilliant 35 mm print from the Library of Congress I saw at Cinevent in Columbus, OH. The long Sleeping Beauty set piece that concludes the film is an eye-popping riot of contemporary design references, most notably the delicate silhouette illustrations of Arthur Rackham and the romantic sweep of Howard Pyle’s paintings. 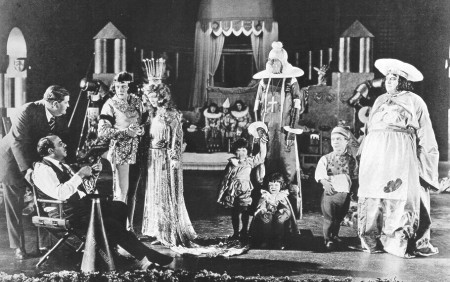 Joseph Urban, Robert Vignola, Forrest Stanley, Marion Davies and extras on the set of Enchantment. This photo is misidentified twice in Carter and Cole’s exhaustive Urban as being from When Knighthood was in Flower.

Hearst met his wife, Millicent, when she was a dancing member of The Merry Maidens; they married in 1903. She was the mother of his five sons, and by the time he met Marion (around 1918) the marriage was in name only. Millicent refused categorically to give him a divorce. At the time Enchantment was filmed, Marion’s friendship with W.R. was still a secret. Gretl Urban, Joseph Urban’s daughter, designed Marion’s costumes for some of her later films. Writing about a 1921 trip through Mexico with Hearst, Marion and her father, (among others), Gretl (quoted in Urban by Randolph Carter and Robert Reed Cole) wrote: “Hearst did not permit Marion off the train for fear of gossip even when we went to stretch our legs in some godforsaken tiny hamlet. In those days, Marion was kept under wraps, albeit rather elaborate ones. In New York she and her mother, Rose, and sisters were domiciled in a sumptuously decorated Riverside Drive townhouse, while her father, who found Rose incompatible, lived in an adjacent brownstone. Hearst himself maintained a hideaway in the Beaux Arts Hotel in the East Forties. It was a rather depressing place, cluttered with Victorian furniture and dark red velvet. When, on occasion we watched the rushes there, Marion would come with us, to be whisked up in the private elevator, all very dignified and hush-hush. Hearst always arrived later. While were watching the screenings, projected by Joselph Willicombe, Hearst’s superdiscreet secretary, Marion and Hearst sat together, but we never observed the least sign of intimacy between them. Marion always addressed him as W. R.” Later, the Hearst/Davies liaison became an open secret, but was never acknowledged in the fan magazines. In the 1930 book, How I Broke Into the Movies, a page signed by Marion advises the aspiring actor, “to come well fortified with stage experience, if possible. It will prove very valuable.”

As Janine Basinger writes in Silent Stars, “Although the critics often gave her excellent notices, they never forgave her for the sin of William Randolph Hearst. No doubt many sincerely resented the immorality that Marion represented in those more restrictive years; for many people in the press, as well as in the audience, Marion Davies was a ‘fallen woman.’ The fact that she not only wasn’t suffering for it, but was apparently having a heck of a good time–and becoming a big-time movie star while having it–must have really irritated them.” Many of her films were Cinderella stories, and Basinger remarks, “The fact that her off-screen life was a perverted version of the fairy tale–Hearst was no Prince, and her shoe may have fit, but she never got the ring–must have been buried somewhere in everyone’s subconscious.” 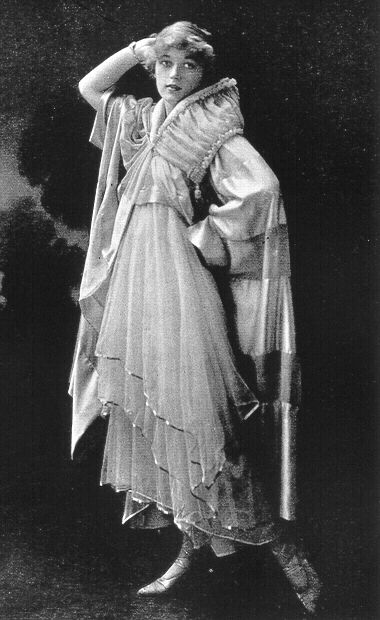 Marion as she must have appeared when she met Hearst

Photoplay, which was not a Hearst magazine, singled out Enchantment as the best picture of February, 1922, beating out Tol’able David, “Miss Davies proves herself one of our most adorable heroines. She has steadily progressed.” Her best films are commonly acknowledged to be two comedies of the late silent era, The Patsy and Show People, both directed by King Vidor. But, although Enchantment‘s plot has less sizzle, her comic touch is charming, and the film deserves a bigger modern audience than its limited availability has been able to achieve.

(Photo of Enchantment set from Caligari’s Cabinet and Other Grand Illusions by Leon Barsacq. Production photo from Dale McConathy and Diana Vreeland’s Hollywood Costume: Glitter, Glamour, Romance. Photo of Marion from The Secrets of Distinctive Dress by Mary Brooks Picken (1918). The caption reads, “Marion Davies, Who knows well the beauty of lithesomeness.” She must have still been a Follies Girl when this photo was taken.)

Cinevent takes place in Columbus, OH during Memorial Day weekend. Their website is www.cinevent.com. A highlight of the 2001 event was a program of pristine 35mm prints, Sky High with Tom Mix, and from the Library of Congress, Enchantment and two short comedies, All in a Day with Snub Pollard and Rough on Romeo with James Parrott.