Fanny and Alexander’s idyllic childhood in turn of the century Sweden is shattered by their father’s death and their mother’s remarriage to a stern minister, not unlike Ingmar Bergman’s own father. The filmmaker sets aside his often moody world-view in his last theatrical feature. “Pure enchantment…Comedy, tragedy, romance, realism and fantasy blend into a perfect evocation of childhood, place and period…A superlative culmination of (Bergman’s) 37 years as one of the cinema’s greatest artists.” (Holt Foreign Film Guide).

Director Ingmar Bergman was born in Uppsala, Sweden, in 1918. He had a strict Lutheran upbringing overseen by his father, a pastor. His childhood was often unpleasant. When punished, he would be locked in a cupboard and told he’d be joined by “things that will eat your toes.” The women in his life exerted a sunnier influence, especially his mother, Karin, and her mother, as well as other female relatives. His films reflect this feminine bias, and he would marry five times. His childhood ambition was to be a projectionist, the result of sneaking to movie matinees after Sunday church services. In college, he majored in literature and art history. He began to write and direct plays and this led to his becoming a screenwriter. His first filmed script was in 1949, Torment, about a schoolboy tortured by a sadistic schoolmaster. He worked as a “script girl,” checking film continuity for other directors, giving him a chance to see how films were made. After a number of formulaic movies, he made his first mature work in 1953, Sawdust and Tinsel.

Bergman had a grand success at the 1955 Cannes Film Festival with Smiles of a Summer Night, an uncharacteristically romantic film, and the head of Svensk Filmindustri was in a magnanimous mood when Bergman approached him about financing for his next project, the death-haunted The Seventh Seal. The spiritual quest of The Seventh Seal and Wild Strawberries—both came out the same year—have become intellectual touchstones for cinema lovers, and landmarks of the vanished golden age of the international art film. Bergman’s work established that Swedish films were second to none on the world screen. His career has three distinct phases, his early films in which he dealt lightly with social and political issues, the mid-career films in which he ponders questions of faith, and the films of his old age, in which he muses on the solace that memory may or may not provide.

There were three related versions of Fanny and Alexander. The script was published in 1979, a five hour television drama premiered on Swedish TV on Christmas Day, 1982, and a shorter theatrical film was released the following year. The latter won Oscars for cinematography, art direction, costumes (most unusual for films not in English) and as the Best Foreign Film of 1983. It was both the longest and the most expensive film in Swedish history, with 60 speaking parts and 1200 extras, and as Bergman’s avowed final work created an atmosphere of great expectations. The Swedish press embraced his loving depiction of a particularly treasured period of Swedish history. “Better to stop now, while everything is perfect,” Bergman said (Cohen). And, with the exception of some films made for Swedish television, Fanny and Alexander has been Bergman’s final film to date.

There were several reasons for this retirement. Bergman felt the physical strain of six decades of movie-making had taken its toll. He had endured the public humiliation of a high profile tax-evasion case just before making Fanny and Alexander, and while he retained full artistic control of his films, international financial and distribution considerations had become burdensome to him.

In Images: My Life in Film, Bergman acknowledged his two major influences for Fanny and Alexander, Charles Dickens’ world and that of ETA Hoffman, author of “The Nutcracker.” The film begins with an homage to an early scene from Hoffman’s story, “Two children are quivering close together in the twilight of Christmas Eve, waiting impatiently for the candles on the tree to be lighted and the door to the living room to be opened.”

“From the very beginning one can see that with Fanny and Alexander I have landed in the world of my childhood. Here is the University town and Grandmother’s house with the old cook, here is the Jew who lived out back, and here is the school. I am already in the place and beginning to roam around in the familiar environment. My childhood has, of course, always been my main supplier, without even my ever having bothered to find out where the deliveries were coming from” (Images).

The script took three months, and there was a year of pre-production before filming began. “All it takes is a couple of days for me to get the feeling that I am in the middle of something that has always existed,” Bergman said (Images). Filming dragged on, delayed by a variety of illnesses and injuries. The five hour TV version was Bergman’s artistic priority, with theatrical distribution of a shorter film a secondary consideration.

“I can still roam through the landscape of my childhood and recreate the lighting, smells, people, places, moments, gestures, intonations and objects. Seldom do these memories have any particular meaning. They are like bits of film, short or long, with no point, shot at random. This is the prerogative of childhood: to move in complete freedom between magic and oatmeal porridge, between boundless terror and a joy that threatens to burst within you” (Images).

Virtually all the themes, character types and narrative and visual devices of his films are present in Fanny and Alexander, “eavesdropping, death, humiliation, narcissism, reconciliation, imagination, a sacrifical victim and miracles…There is the character who questions God’s existence, a child who is involved in a love-hate relationship with his parents, a character who forswears the materialistic life to get in closer touch with God’s will a woman who discovers her self as she rebels against a dominating husband” (Cohen). Although many of Bergman’s films chronicled his characters anguish over these subjects, this older, more compassionate director is finally able to consider life’s pleasures uncritically. As in Fellini’s films, the clash between the illusion of the theatrical world and that of reality is a vital and pervasive theme.

Kjell Grede, a filmmaker once married to Bergman regular Bibi Andersson wondered, “Why a man of lusty vitality had persistently given the public such depressing stories” (Gado). Or, as Anthony Lane wrote in recommending a summer (2004) Film Forum retrospective of the director’s work in New York City, “Not to plan a pilgrimage to Houston Street would be graceless, although we should resign ourselves to the fact that, like many of Bergman’s characters, we will make the journey alone. There may be a way of persuading casual acquaintances to come along for a festive double bill of Frenzy and Crisis, but, if so, it’s news to me.”

In contrast, “Fanny and Alexander offers us a glimpse of an earthly paradise, which is not what we have come to expect from Ingmar Bergman, that master of private hells. Its highly theatrical pleasures are right there on the surface, it’s a fairy tale, a ghost story, a family epic, a portrait of the artist in the making. There is a little something for everyone in this swan song” (David Ansen, Newsweek). 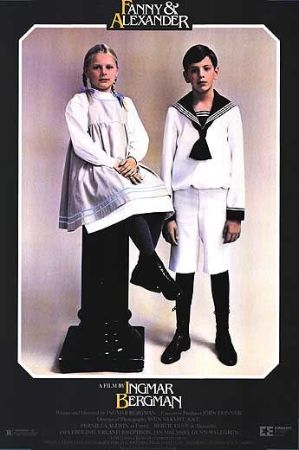