Bergman won her first Oscar in this Victorian era gothic noir as Paula, an opera student who falls in love with a mysterious stranger. They move into the abandoned house of her murdered aunt, and Paula fears she is going mad…or is she?  Eighteen year old Angela Lansbury makes her film debut as a saucy Cockney maid.  “One of Bergman’s best performances, with Boyer not too far behind, and Lansbury unforgettable….” (Time Out Film Guide).

In 1935, a play about Queen Victoria, Victoria Regina, debuted on Broadway.  Portrayals of her on stage and screen had been previously forbidden by the Lord Chamberlain in Great Britain.  But, the abdication of Edward VII called for a more sympathetic view of the British monarchy, and the ban was lifted.  Stories about the era to which Victoria lent her name became popular. “Gaslight Melodramas” were a popular genre in the 1940s, looking back with nostalgia to the era of wartime moviegoers’ grandparents.  Lighting by gaslight, which had once been the harbinger of urban modernity, was now quaint and old fashioned.    The light was soft and romantic, but the shadows had a sinister edge, like the shadows of film noir, a boon for both directors and cinematographers.  New versions of Dr. Jekyll and Mr. Hyde, Hound of the Baskervilles, The Lodger (about Jack the Ripper) and other tales set in the late Victorian era occupied the screen, along with some slightly less threatening tales, like Meet Me in St. Louis.

At the same time, these films sometimes took a more female centered perception.  As the femme fatales of film noir mocked returning GIs with their threatening sexuality and autonomy, heroines of gaslight melodramas feared their loss of freedom, and the return of male authority figures from the war to assert control.  Paula is disbelieved when she voices her suspicions, an abuse of male power and authority that surfaced in the Presidential election of 2016.  In fact, gaslighting became a national obsession.  What is truth, what do you believe, and are they the same?  Are your perceptions so colored by emotions that you can no longer believe your lying eyes? 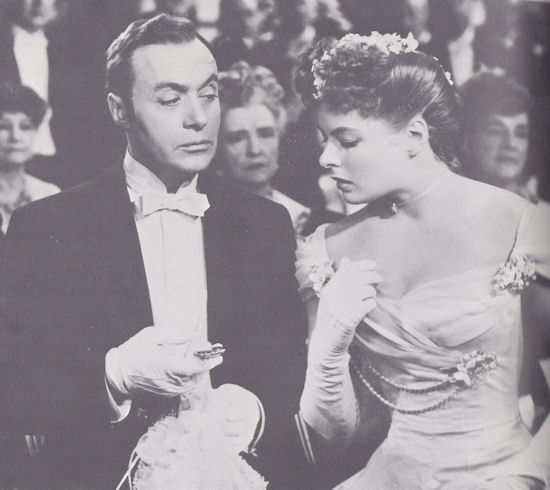 Boyer and Bergman (from Quirk).

When Bergman appeared at the top of the stairs in this incredible satin ballgown, the NCMA audience gasped in appreciation.

Ingrid Bergman was an only child.  Her father was a painter who ran a camera shop, 13 years older than her mother.  Her mother died when she was three, and her father when she was twelve.  She lived with relatives who disapproved of her desire to go to drama school, but she prevailed, and by the age of 19, she was making movies in Sweden.  Her breakthrough film was Intermezzo, about an affair between a married violinist and his young student.  Hollywood lore says that producer David O. Selznick’s New York representative, Kay Brown, worked in a building with a Swedish elevator operator, who told her about a wonderful film he had seen piquing her interest, and then her boss’s.  Soon, Bergman would arrive alone in California, a one picture contract in hand (so she could return to Sweden if things didn’t work out) even though she already married to a dentist, and with a small child.

Selznick said, “The minute I looked at her, I knew I had something.  She had an extraordinary quality of purity and nobility and a definite star personality that is very rare” (Quirk 23). To build up her confidence, Selznick suggested she do a remake of Intermezzo, with Leslie Howard.  The film was a huge hit, and she decided to stay in Hollywood.  She starred opposite Gary Cooper in For Whom the Bell Tolls (and had an affair with him) and in 1942, she was loaned to Warner Brothers for Casablanca, and her screen immortality was assured.  Her star image was wholesome, but Bergman was a passionate person, as her affair (she was still married to her husband, Peter Lindstom) revealed.  She wanted to expand her range on screen, and Paula, in Gaslight, is not a typical romantic heroine. 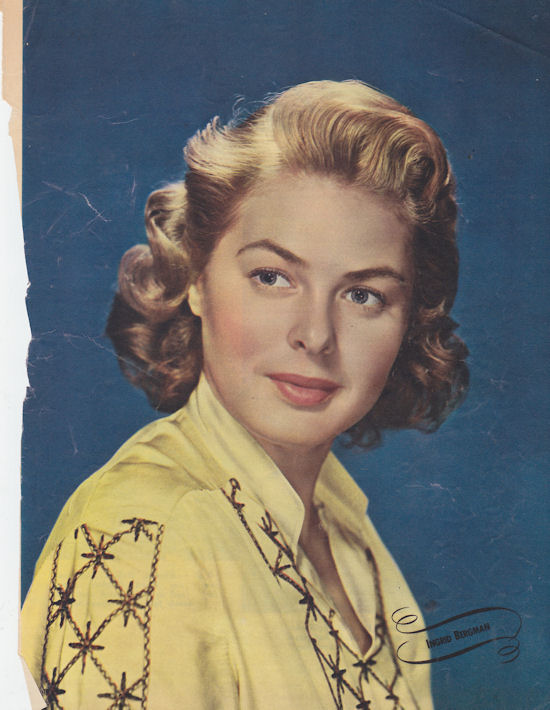 Fan magazine portraits were always demure. No cheesecake for Ingrid

Gaslight was based on a play, Angel Street, that opened in London in 1938, and in New York in 1942.  On Broadway, the Charles Boyer role was played by Vincent Price.  A British version of the play had been filmed in 1940, and MGM bought the rights to the play and the film and tried to destroy all copies of the British film so there could be no comparison “one of the most barbarous acts in the history of world cinema” (Swindell 189). Luckily, it survived the treachery, although it did not premiere in the US until the 1970s. 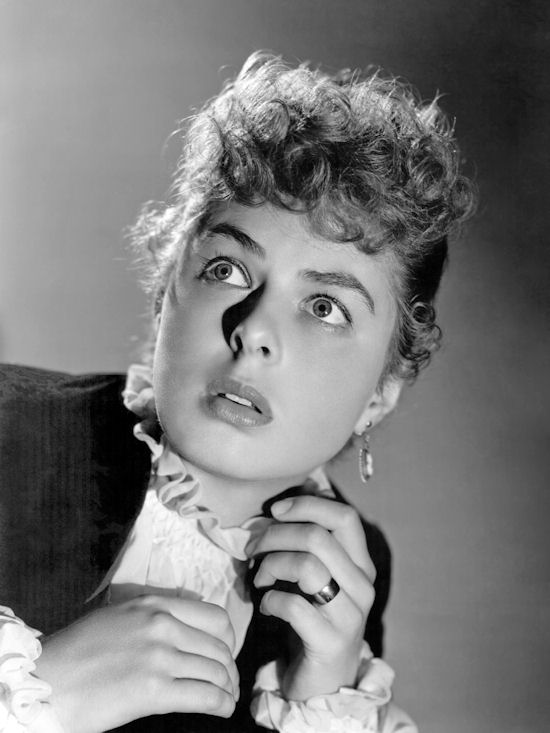 Both Irene Dunne and Hedy Lamarr were discussed for the role of Paula.  George Cukor was signed on as director, and David O. Selznick, who had Bergman under a personal contract, persuaded his father-in-law, MGM mogul Louis B. Mayer, to cast her as Paula.  The screenplay would be different from the stage play, in that it provided much more of a backstory for the wife, taking the emphasis away from the husband, and the screenwriters protested mightily: “Ingrid Bergman is a powerful woman, with enormous shoulders, strong, healthy and no man on earth can talk her into being silly or insane.”  But Cukor suspected the opposite was true, “That’s the challenge, he said, and as he thought about Ingrid’s fling with Gary Cooper, he may have guessed that she was shakier than she looked.  After all, she was an actress!  Who ever heard of a strong, secure woman taking that course in life?” (Thomson 46-47).

There was a bit of a scuffle about billing, Boyer thought his longer American career should be respected, and David O. Selznick wanted all his hard work at promoting Bergman’s career to be rewarded.  But Bergman really wanted to play Paula and didn’t care about billing.  Cukor insisted that each scene be meticulously rehearsed before the cameras rolled, and both stars, dedicated to the craft of acting, responded to his technique.  The film version was to an extent modelled on the claustrophobia of the stage show, where the heroine’s confinement, and the dimming of the lights held such theatrical power.

In her autobiography, Bergman fumed about how often the first scene to be shot was a love scene, when she hadn’t even met her co-star before filming.  “And with Charles Boyer, it was absurd.  Our opening shot, out of sequence, as always, was when I arrived at a railway station in Italy.  I leapt out of the carriage and raced across to where Charles was standing in the middle of the platform waiting to catch me in his arms, passionately embrace me and kiss me.  No woman in her right mind would object to being kissed by Charles Boyer, but I had to do all the running, because there he was, all alone in the middle of the platform, perched up on a ridiculous little box, since I was quite a few inches taller than he.  So, I had to rush up and be careful not to kick the box and go into my act.  It was easier for us to die of laughter than to look like lovers” (Bergman 134). 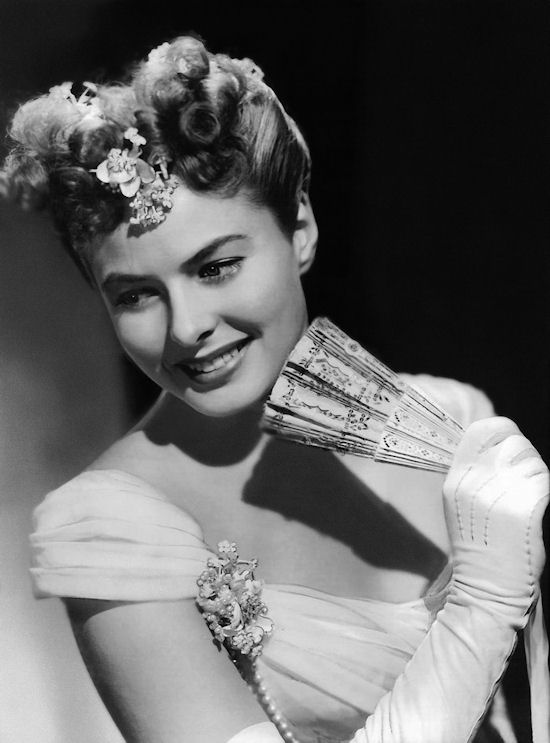 Boyer was married to English actress Pat Pattesson.  They had been trying to start a family without success, but she became pregnant and gave birth to a son during filming. The plan had been for the movie to be wrapped when the blessed event occurred, but his son came two weeks early.   He phoned home regularly to check on her, but one day returned to the set with the happy news he was the father of a son.  There was no filming the rest of the day as the cast celebrated with champagne.  Bergman had nothing but praise for him, “I thought Charles Boyer was the most intelligent actor I ever worked with and one of the very nicest” (Bergman 134). 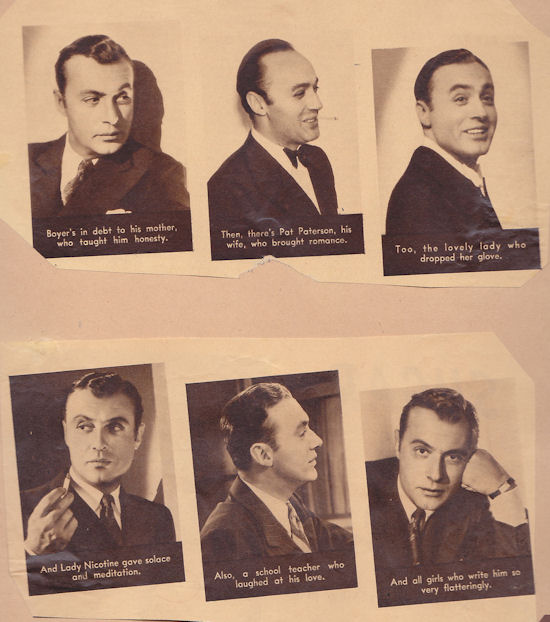 Fan magazines were full of the romantic French star. Here is a “many moods” photo layout from a movie star scrapbook.

Angela Lansbury made her film debut in Gaslight.  She was the daughter of a well-known British stage actress, Moyna Macgill, who had arrived in Hollywood with her children on the last civilian ship allowed to cross the Atlantic before the start of WW II.  Moyna knew playwright John Van Druten, and she called him to ask him to put in a good word for her daughter with George Cukor.  She did a screen test with Cukor, in a maid’s uniform pulled from stock, and she waited.  Louis B. Mayer was on the east coast, and no decisions could be made without him.  When he saw the test, he turned to his assistant and said, “Sign that girl” (Gottfried 56). 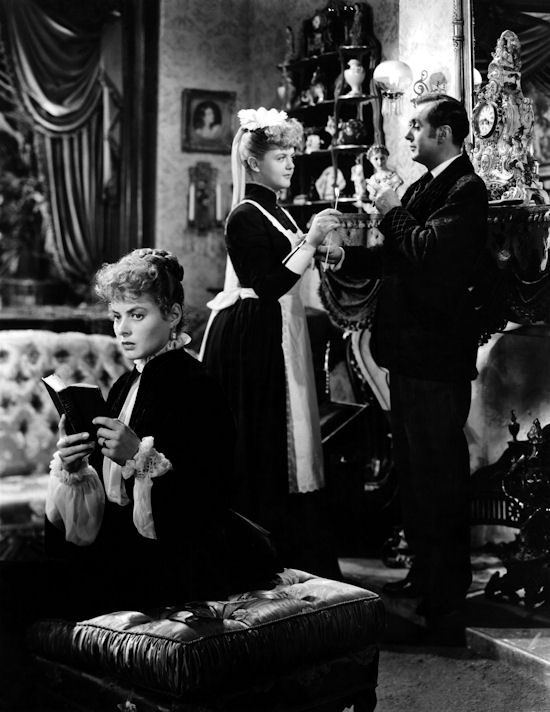 Even though Cukor wanted her for the part, he was surprised by her skill once the camera rolled.  “Suddenly, I was watching real movie acting.  She became this rather disagreeable little housemaid—even her face seemed to change, it became somehow lopsided.”  “He also ‘laughed uproariously’ she remembered, ‘when I did my Cockney accent.  Then he would goad me into being saucy and sexy with Ingrid and Charles’” (Gottfried 60).  She was nominated for an Oscar in her screen debut, but amazingly, it was also her first appearance as a professional actress. 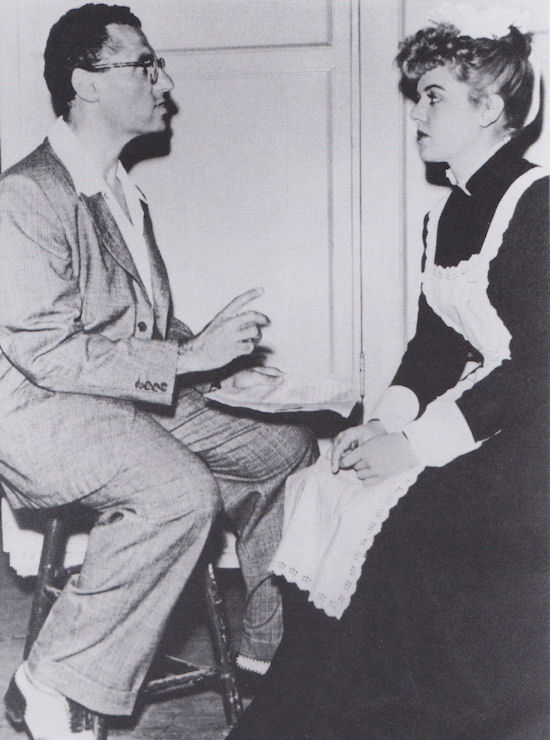 Bergman’s costumes are amazingly historically accurate.  MGM’s Irene was assigned the film, but was more comfortable with modern wardrobes, and, at first, Paula’s wardrobe was copied precisely from old fashion plates.  Director George Cukor brought in Madame Barbara Karinska, a master cutter and construction expert. Her designs appeared on screen, according to studio costume shop veterans, Irene received the credit without having created the designs (Chierichetti  32).  Yet, when appraised for an exhibit on period costume design in Hollywood, the museum curator Edward Maeder found that the gowns included Irene’s trademark carefully matched stripe and scallop motifs, beautifully draped chiffon and asymmetry, especially in some of the ball gowns.  So, who is to say, after all these years?  Sometimes, it is the cutter/draper, not the designer, who has the final word. 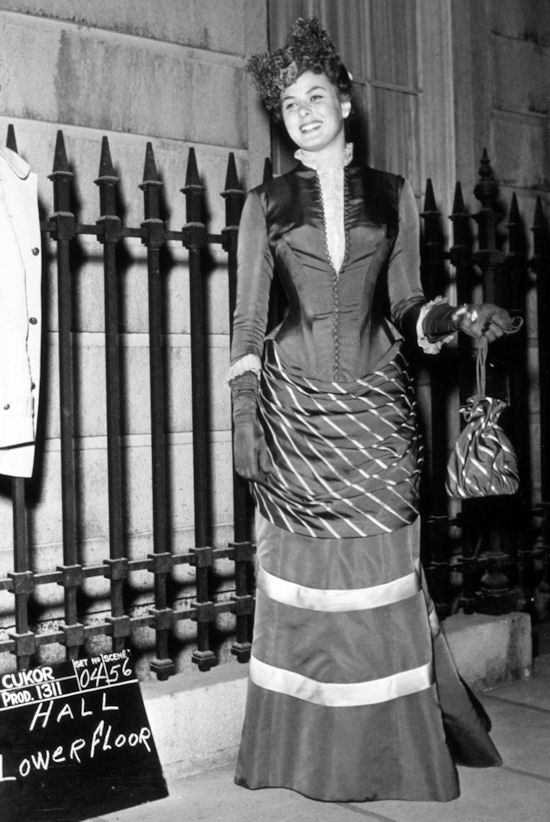 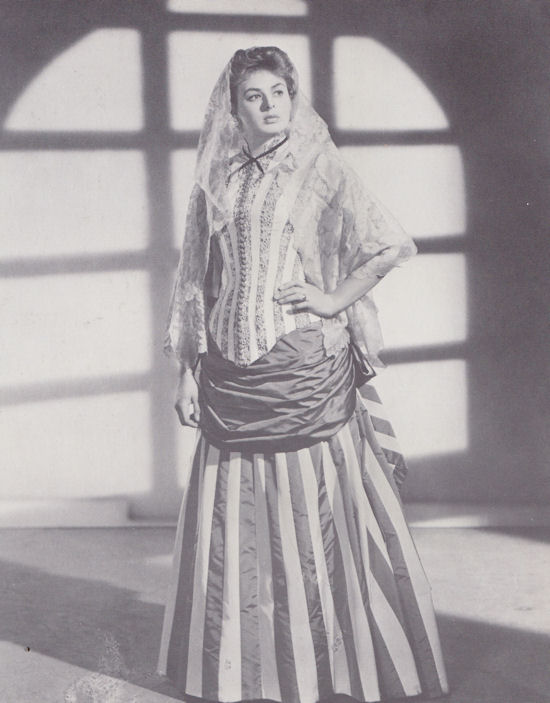 Frock Flicks, a website I love, finds the plot of the film gives them the heebie-jeebies (from a feminist point of view) but loves the historically accurate costumes:  http://www.frockflicks.com/tbt-gaslight-1944/ Great screencaps and photos of the actual costumes on display can be found.  Here is a detailed look at a costume worn by character actress Dame May Whitty

Gaslight was a smash hit, nominated for seven Oscars, winning for art director, and Ingrid for Best Actress.  Boyer was nominated, as was Angela Lansbury’s cheeky housemaid.  But it was the year that Going My Way swept the Academy Awards, and Boyer, far from being disappointed at not winning, was pleased that, in a so-called “woman’s picture” he was even nominated.

The sold-out screening at the NC Museum of Art was a lesson in how beautifully classic films play to an enthusiastic audience. They got that the plot is a bit on the creaky side (there is never any doubt about Boyer’s evil), and they laughed (with pleasure, not derision) at some moments. Dame May Whitty’s comic character was a particular favorite. When Paula says she is going out–alone, the audience burst into spontaneous applause. Bergman is extraordinary, and the audience was completely on her side, urging her to believe her own suspicions. I can’t imagine a more enjoyable cinema experience. 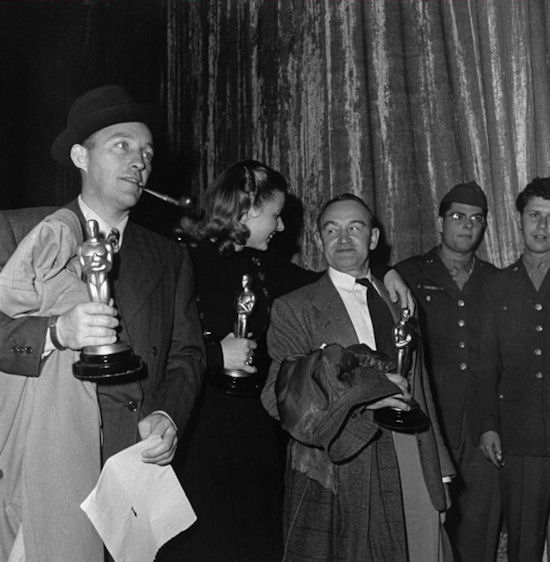 Bing Crosby, Bergman and Barry Fitzgerald after the Oscars