Buster Keaton was a child vaudeville star in his family’s rough-house comedy act. After the Five Keatons broke up, a chance encounter on a New York City street and a day of improvising on the set of a Fatty Arbuckle 2-reel comedy changed his life. He was smitten with the movies. Keaton and Arbuckle made 15 short comedies between 1917 and 1920; Keaton increasingly shared the director’s chores with Arbuckle. Offered his own studio, Keaton embarked on a decade of 2-reel and feature comedies unmatched for their uniquely audacious and elegantly surreal humor.

The General was inspired by an 1863 book, Daring and Suffering: A History of the Great Railway Adventure, republished as The Great Locomotive Chase. The author, William Pittinger, was a survivor of a brash attempt by Union officers to hijack a locomotive, The General, in Georgia. They intended to drive it north, destroying track and telegraph lines and burning bridges in their wake. Had they succeeded, the Civil War might have ended early. But, the plan ended in disaster for the Yankees when The General’s crew chased them down and scotched the raid, 9 raiders were jailed and the rest, hanged. Keaton thought the story was brilliant, but that the hero had to be from the South, “You can always make villains out of the Northerners, but you cannot make a villain out of the South,” he explained.

The countryside surrounding Cottage Grove, Oregon had the pine forest and logging track Keaton needed, and woodburning 4-4-0 (4 lead wheels, 4 drive wheels and none under the cab) locomotives he could hire. He shipped up 18 railway cars of equipment from LA, hired 500 extras from the Oregon National Guard to play the armies and began building antebellum Georgia on the edge of town. He wanted it to look like Matthew Brady’s Civil War photographs, so authentic, “it hurts,” and it was his most personal film. The General is a long chase, taking off in one direction and folding back on itself. Almost 70% of the film is a series of elaborate tracking shots, often as a cameraman stood up in a speeding car hand-cranking a camera along a parallel set of railroad tracks. Remember, Keaton was a superb acrobat: no doubles, no tricks shots. 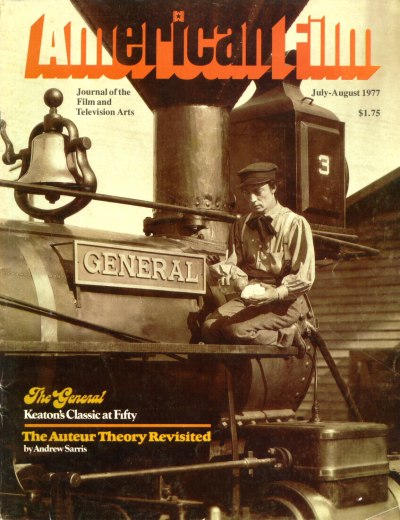 The crash of The Texas was the most expensive single shot of the silent era at $42,000 1926 dollars. If Chaplin’s movies were an intimate record of his comic performances; Keaton’s vision was large scale. He was drawn to a tiny figure marooned in a vast landscape, and he avoided close-ups, even of his own expressively unsmiling face. Now considered his masterpiece, regularly appearing on lists of the greatest films of all time, The General was considered a failure in its day and indirectly led to Keaton’s loss of artistic autonomy.

More Keaton on Moviediva, Sherlock, Jr. and Out West.

Those interested in Buster Keaton should visit the official fan club website of the Damfinos, at www.busterkeaton.com.

David Drazin, who played for the June 6, 2000 showing at the North Carolina Museum of Art, is a pianist and jazz archivist living in Chicago. His regular gig is with the Gene Siskel Center at the Art Institute of Chicago, but he has played in venues all over the country, and for the last two years was invited to play at the world’s most prestigious silent film festival at Pordenone, Italy. In a 2005 review of David’s music for a retrospective of Yasujiro Ozu’s silent films, Chicago’s second most famous film critic, Jonathan Rosenbaum of the Chicago Reader, said, “the accompaniments of David Drazin alone are worth the price of admission.” Here is the link to the David Drazin website.