“Godzilla is the son of the atomic bomb. He is a nightmare created out of the darkness of the human soul. He is the sacred beast of the apocalypse.” –Tanaka Tomoyuki, Gojira producer.

Not a cheesy monster movie starring Raymond Burr, the original Gojira was a fire breathing metaphor of Hiroshima’s devastation and a meditation on how Japan brought the world’s nuclear wrath upon themselves.

The monster Godzilla references folkloric beasts from many different cultures, while evoking Asian dragons and the natural destruction wreaked on Japan by earthquake, volcano and tsunami. But, he was born most particularly from Japan’s post WWII anxiety about the atom bomb, of which they had been sole victims. One incident, in which a Japanese fishing trawler was too near detonation of an H Bomb test in 1954 (they reported seeing the sun rising in the west) directly inspired Gojira.

Aside from historical events, in the entertainment world, the original King Kong was re-released worldwide in 1952 to great success, and in Kong’s wake The Beast from 20,000 Fathoms became an international blockbuster in 1953. The Beast was about a dinosaur thawed from its prehistoric repose by nuclear testing, and Godzilla was in some ways an imitation of it. In fact, Godzilla’s working title was The Giant Monster From 20,000 Miles Beneath the Sea.

The Japanese movie industry made many popcorn movies for the domestic market, but after the worldwide acclaim of Akira Kurosawa’s Rashomon (1951) Japanese films were received with unprecedented seriousness by world film culture. Gojira was intended to be a thrilling, but thoughtful film. Producer Tanaka Tomoyuki produced several Kurosawa films, including Yojimbo and director Honda Ishiro would work with Kurosawa as an assistant director on some of his later films, including Kagemusha and Ran. Honda was serious about the need for world peace. He served three tours of duty in the Japanese army, was a Chinese POW in China and saw Hiroshima’s devastation after the war. He wanted the film to “make radiation visible” and challenge the ethics of the nuclear age, bringing an end to atomic testing. Many scenes recall the American firebombing of Tokyo in WW II. For others, the monster Godzilla seemed like the return of the wrathful soldiers’ souls who had died in the Pacific war. Original Japanese audiences would watch the film in silence (although they did cheer when the massive radioactive monster destroyed the Diet, the Japanese Parliament building) and leave in tears, with the message that Japan’s moral authority would triumph over the ravages of American technology.

Tsuburaya Eiji was a Japanese special effects pioneer; his miniatures in one film were mistaken for newsreel footage. The 1/25 scale model of Tokyo in Gojira was meticulous. Small explosive charges were set under items made of wax, so they could melt under Godzilla’s radioactive breath, creating a convincing scene of urban devastation.

Godzilla cost $175,000, about twice the average budget for a Japanese film at the time and taking far longer to film; the special effects shots alone were longer than the usual schedule. The actors were top notch. Takashi Shimura starred in both Rashomon and The Seven Samurai, and after his performance in Ikiru was described in the NY Times as “the best actor in the world.” (Tsutsui). Classical composer Ifukube Akira created not just the atmospheric score, but Godzilla’s cry (a leather glove stroked the keys of a contrabass and the sound was modified in an echo chamber) and his fearsome stomping.

Godzilla himself was a fusion of several different dinosaurs, a creature unknown to science. Gojira, a portmanteau combination of gorira (gorilla) and kujira (whale) was brought to life by what the studio called “suitmation.” The costume, inhabited for only a few minutes at a time by stuntman Nakajima Haruo was made of bamboo stakes and wire overlaid with latex and urethane foam. The suit was heavy, hot and uncomfortable, and allowed for a minimum of emotional expression, but Nakajima studied movie monsters King Kong and Mighty Joe Young, as well as animals in the Tokyo zoo so as to mimic animal movements as much as possible. Like his precedents, Godzilla inspires sympathy as well as terror.

When American producer Joseph E. Levine bought the rights to the movie, he knew his American audience would not be the subtitle-reading type, so he dubbed it (a common practice at the time) and filmed a reporter/narrator played by Raymond Burr, aided by a Japanese buddy who could translate the dialogue. About 40 minutes were sliced out, and 20 minutes added. Burr, before his tv fame in Perry Mason and Ironside was a hard working supporting actor, who filmed all his Godzilla scenes in an LA studio over the course of one 24 hour shoot. The brooding atmosphere of nuclear doom, war-time human suffering and perceived anti-Americanism was cut in favor of the rampaging creature. Godzilla was publicized as an action movie, with all subtext removed.

Godzilla became so popular around the world that many sequels were made, but none approached the serious attitude or the technical expertise of the original. After 50 years, they are still being made in Japan, and Godzilla has many obsessive fans. Godzilla has entered the language—the suffix “zilla” indicating something large and destructive, and the monster is one of the most recognized symbols of Japan.

This film was shown in this country in the original Japanese version only in one Japanese theater in Los Angeles in 1954, and this new print comes from Rialto Pictures, committed to distributing foreign language classics, especially those slighted in their original US release. The amusing and enlightening Godzilla on my Mind by William Tsutsui is a must-read for all Godzilla fans.

“Godzilla was the most masterful of all the dinosaur movies, because it made you believe it was really happening.” –Steven Speilberg

“As crass as it is visionary, Godzilla belongs with—and might well trump—the art films Hiroshima Mon Amour and Dr. Strangelove as a daring attempt to fashion a terrible poetry from the mind melting horror of atomic warfare.” –J Hoberman, Village Voice. 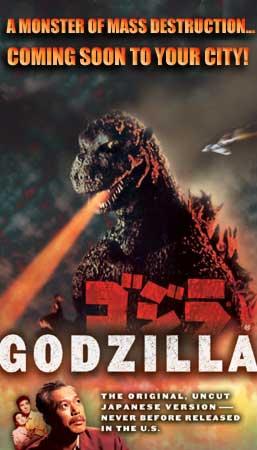