“I tried, if you like, to erase the borders between the representation of reality and reality itself. I tried to establish a kind of confusion between acting on a theatrical stage and acting in life.”–Jean Renoir

An Italian theater troupe invades the New World (“It will be nice when it’s finished”) seeking their fortune. Charismatic, sensual Camilla feels truly alive only for her two hours on stage each night, although she amuses herself with three rival suitors. The 18th century Spanish court has transposed its decadent society to the South American wilds; a bullfighter, the government ministers and a Bishop act as if they have never left Europe and everyone plays a part.

Film director Jean Renoir was the middle of three sons born to Impressionist artist Auguste Renoir. Young Jean was the subject of many of his father’s paintings. He discovered the pleasures of movie going during a long recovery from several WWI injuries. After the war, Jean returned to nurse Auguste through his final illness, and met and married his father’s beautiful redhaired model, Catherine Hessling. The newlywed worked as a potter but became increasingly enamoured of film, sometimes going to the movies 3 times a day. He saw Erich von Stroheim’s Foolish Wives 10 times, and began to dream he, too, could be a filmaker. With the money he inherited from his father, he set up his own production company and starred his wife in a number of silent films he wrote and directed.

In the 1930s he made a number of superb movies, at least two of which, La Regle Du Jeu (The Rules of the Game) and La Grande Illusion recur time and again on lists of the greatest films of all time. He left France in 1941 and worked in Hollywood, although his films there were a disappointment compared to his French films of the thirties. He made a film in India, The River, and then returned to Europe to make Le Carosse ‘dOr, the first of three films he made about the theater in the early fifties, the other two being French Cancan and Elena et les Hommes (Paris Does Strange Things).

Renoir had been interested for some time in Prosper Merimee’s one act play “The Coach of the Blessed Sacrament”, which was also the basis of Jacques Offenbach’s 1868 opera La Perichole. The producers had been warned that Renoir was not going to follow the story too closely. The Golden Coach is set in 18th century colonial Peru. Renoir listened to the Vivaldi he would use to score the film while writing the screenplay saying, “It is wonderful to have someone who has been dead for several hundred years as your associate, because he never objects.” He had more (live) collaborators on this script than any other he wrote, since he was unsure of his ability to write amusingly in English. You’ll see the English-language version tonight, but this film was also made in French and Italian; and one of the actors playing Camilla’s suitors speaks English, one, French, and one Italian. So, the difficulties of co-production become a theme before the camera. Renoir also had terrible technical problems while editing. Electrical current in Rome was never consistent, so synchronization was difficult and a high technical quality impossible. “Of course,” he said, “if I had to choose between Rome and Hollywood, I would choose Rome. The highest standard of technique without the liberty of creation means nothing.” In the original American release, Jean Renoir spoke an explanatory prologue to the film. 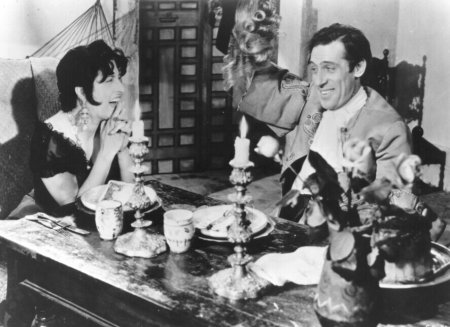 Working in English was not something that appealed to Anna Magnani. She was not well known outside of Italy, in spite of her fame resulting from Rossellini’s Rome: Open City (which I hope you saw here in my inaugural season!) In four years she would win an Oscar as Best Actress in The Rose Tattoo, speaking English, but all her lines were learned phonetically in this film, and she is a bit hard to understand. She often arrived on the set after night clubbing until late, she was 44 when this film was made and the dark circles under her eyes cannot always be hidden by make-up.

Renoir was initially worried that she would bring too much psychological realism to the part. But, she had spent a good part of her career singing bawdy songs in seedy cabarets and as “the last of the great shameless emotionalists” she understood the bravura the part required. Indeed, her volcanic personality overwhelms her rather bland suitors. Renoir described The Golden Coach as “not so much an Anglo-American film as a translation into English of a French film in the Italian style.” Some of the supporting cast came from the commedia dell’arte, which is a traditional theatrical style in which stock characters perform in scripted plays around which the actors improvise in character. One of the most familiar uses of the commedia dell’arte in an English language work is Raphael Sabatini’s novel Scaramouche and the films made from it.

Francois Truffaut wrote in introduction to a retrospective of Renoir’s films, “My judgement that Jean Renoir is the greatest filmaker in the world is not based on a public opinion poll, but purely on my own feelings. It’s a feeling, I might add, shared by many other filmmakers.” And, about The Golden Coach in particular, “There was an unfairness in the way the critics and public received Le Carrosse d’Or, which may be Renoir’s masterpiece. In any case, it is the noblest and most refined film ever made. It combines all the spontaneity and inventiveness of the prewar Renoir with the rigor of the American Renoir. It is all breeding and politeness, grace and freshness. It is a film of gestures and attitudesLe Carosse d’Or is itself absolutely beautiful, just as beauty itself is the subject of the film.”