Mount Vesuvius broods over four stories set in De Sica’s beloved Naples. The reluctant host of bullying gangster takes a stand; an earthy pizza-vending goddess convinces her husband she lost an emerald ring in her dough, not during a lovers’ tryst; a dapper count in thrall to a gambling addiction is reduced to playing cards with his concierge’s small son, and a beautiful prostitute gratefully consents to a marriage with a handsome stranger. De Sica said of the actress he would make a star, “It was a revelation. Sophia was created differently, behaved differently, affected me differently than any other woman I have known. I looked at that face, those unbelieveable eyes, and saw it all as a miracle”

Yesterday, I hope you came to see The Bicycle Thief which is not only De Sica’s most famous film, but one which consistently shows up on lists of cinema classics. It is not, however, as one of my friends insisted “the saddest film ever made” –I reserve that honor for Umberto D another of De Sica’s films, and the third in his trilogy of landmark neorealist films, which began with Shoeshine.

This film is a comedy, although with serious undertones. Martin Scorcese, in his witty and enlightening documentary on Italian film, Mi Viaggi in Italia, says that in De Sica’s work laughing and crying are like two sides of a coin that can be flipped at any moment, a quality that he strives for in his own films. De Sica grew up in Naples, Florence and Rome, and was finely attuned to the differing temperaments of each city’s inhabitants. This film reflects his love for the expansive and humorous Neopolitan outlook on life. The pungent atmosphere of the city, one in which there is little of what we would consider to be the modern world, heralds a return to his early success as a comedic actor. The Gold of Naples capitalizes on De Sica’s innate sense of the theatrical. Notice in all of these stories, the views of the city from the numerous balconies, the drama of walking the streets and hearing the street vendors, and the importance of having an audience for all the dramas of daily life.

De Sica was originally an actor; a very popular actor, “the Italian Cary Grant” in fact. He was a great star of what were called the “white telephone films” in which Italian cinema attempted to recreate the glamour of Hollywood moviemaking. He modestly said, “Brides left their husbands on their wedding nights to track me down.” He had started out in accounting, and dreamed of being a bank teller, but his father insisted he abandon the profession for show business, in what Scorcese calls “surely a first in the history of the world.” De Sica made over 160 films as an actor, beginning in the silent era, and performed on stage for over 20 years. He acted in a number of English language films, in part to finance his directing projects, as well as supporting both a wife and a mistress and their families. De Sica was also chronically short of money because of his compulsive gambling, and his acting and directing for hire were often a result of this pressing need for cash. These more commercial films included It Started in Naples with Sophia Loren and Clark Gable. De Sica’s last appearance as an actor was in Andy Warhol’s Dracula in 1974.

The Gold of Naples is an anthology film, based on the short stories of Giuseppe Marotta, filmed on location and acted by a stellar cast. The author joined De Sica and his frequent collaborator Cesare Zavattini in creating the screenplay. It was “flavorful entertainment without undue compromise” (Cardullo) and the story in which De Sica himself acted, was according to his friends, virtual autobiography. Martin Scorcese says this film was often on television when he was growing up in New York City, and was enormously popular; especially De Sica’s card playing episode. 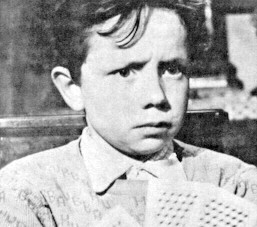 Originally, The Gold of Naples consisted of 5 filmed episodes, one of which, dealing with a child’s funeral was deleted before the film’s release (one other story was never filmed). Shown in Europe in 1954, the film did not arrive in the US until 1957. Those who prefer De Sica’s neorealistic films find this one to be a betrayal of his artistic rigor and philosophy of social activism. The neatly contained plots, the humor, the sentimentality are all considered detrimental to the seriousness that defines high art; rigid thinking that reveals the limitations of many film theoroticians. Indeed, all of the vignettes have inconclusive endings, which scenarist Cesare Zavattoni considered a vital tenant of neorealism. Rather than working entirely with non-professionals, as in The Bicycle Thief, there is a striking cast of experienced performers in the foreground. “But, everything manages to happen in this film as though De Sica had the power of endowing his nonprofessional actors with the skill of experienced performers and his established stars with the spontaneity of common people.” (Cardullo).

Toto stars in the first segment of The Gold of Naples. He was “the most popular film personality in the history of Italian cinema–as well as one of the most naturally funny individuals to ever mug before the movie camera.” (J. Hoberman). He starred in over 100 films yet has managed to remain virtually unknown in this country, with the exception of his small part in Big Deal on Madonna Street (recently remade as Welcome to Collinwood). A recent retrospective of Toto’s career (which did not include this film) has been popular in revivals across the country.

Although Silvana Magnano was a much bigger star when this film was made, today all eyes are riveted by Sophia Loren. She grew up in the outskirts of Naples, a town of a million inhabitants who spoke a unique regional dialect. Naples, like the rest of Italy, was in chaos after the war, a situation compounded by the eruption of Mt. Vesuvius in 1944. Loren began as a beauty school contestant, urged on by a mother who had won a national Garbo-look alike contest in her youth. Sophia was first crowned “Princess of the Sea” for which she won $35.00, a white linen tablecloth and napkins and 8 rolls of wallpaper. She and her mother were both extras in the MGM superproduction of Quo Vadis, which was filmed in Rome, and Loren made a modest living entering beauty contests, modelling and doing extra work. She was discovered by Carlo Ponti, who had promoted Gina Lollabrigida, among others to stardom and Loren became his protegee, and later, his wife.

Clearly, although she was an extraordinary beauty, she needed a lot of help with her acting. Ponti thought that De Sica, a friend experienced in working with non-professionals could help her. Partly because of their shared experience growing up in Naples, they hit it off instantly. De Sica said, “the outstanding quality was her impulsiveness. Neopolitans are extraverts. All her gestures and statements are always outgoing. Nothing is held inside. No internal reflection. I don’t say this only of Sophia, all we Neopolitans are the same. We improvise. We speak first and think later. We go by instinct.” 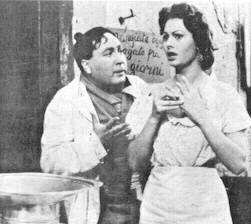 Sophia, in her turn, enjoyed filming on the streets of her youth. “From the first day De Sica became my school, my teacher, my mentor, my everything. Every day he would arrive on the set and say, ‘Ah, Sophia cara, it’s so beautiful to see you first thing in the morning, you make my day!’ I couldn’t have found anyone better to be with me in the beginning of my career” She added, “De Sica made it so easy for me. Whatever a scene required, he always did it first and showed me what he wanted. All I had to do was imitate him. You should have seen him with one hand on his hip, doing the walk for me. Then, while you are working, he stands close to the camera and acts along with you, His face lights eyes, dance, his mouth his shoulders, his arms, his whole body acts alone with you almost as if he carries you along with him. And, it becomes contagious–like he spills his emotion into you and through you back into the camera.” After this film, Carlo Ponti decided she was ready for “sexpot heaven.” (Harris). She came to the US in 1958, preceeded by a huge publicity campaign. Loren was directed by De Sica in a dramatic role in Two Women, in which she became the first actor ever to win an Oscar in a foreign language film.

The English subtitles are by Herman G. Weinberg, who titled many films in this great era of international cinema. I had lunch with Mr. Weinberg when I was in college (because my film studies professor was looking for someone to say, as I did, “Herman G. Weinberg!!”). He was an elderly man in an elderly suit, who started sentences with phrases like “Ingmar Bergman once said to me” “When I was working with Fellini” a mind boggling experience for a cinephile like myself.

Newsweek‘s critic wrote, “Once in a great while in movie-making a scene turns up that transcends the movie it occurs in and long outlives it in memory. Such a scene is in Gold of Naples. It is an episode of an infuriating card game between an elderly count who loves to gamble, but is a wretched card player, and a small boy who is an unbeatable card sharp, but is bored to death by cards. The quality of the scene is such that it seems almost certain to become at least a footnote in the history of film comedy.”