A fussy bachelor who imagines himself the last word in childcare runs afoul of the adorable Baby Peggy and is corrected by this pint-sized expert. Introduced, March 10, 2006, by the film’s star, Diana Serra Cary, the former Baby Peggy Montgomery. Live music by David Drazin.

In the 1920s there were two adored child stars, silent era precursors to that adored moppet of the 1930s, Shirley Temple. One was Jackie Coogan, whose costarring role with Charlie Chaplin in The Kid assured his place in the movie star pantheon. The other was Baby Peggy Montgomery, whose astronomical salary, million and a half yearly fan letters and variety of official licensed Baby Peggy products put her at the vanguard of both celebrity and merchandising at the beginning of the studio era.

Whereas Chaplin’s concern with his own immortality assured Coogan’s as well, Baby Peggy was a different story. She worked mostly for a small, cheapskate studio, the Century Film Corporation, churning out two-reel comedies, first in tandem with Brownie, the Wonder Dog (also a Chaplin star, in A Dog’s Life) and then as a solo. Jackie Coogan continued his career by starring in a series of classic stories in which a boy was the hero, like Oliver Twist. There were a few classics with little girls as the main character, and which lacked a female star. Independent producer Sol Lesser signed her to star in film versions of the famous novels Helen’s Babies, Captain January and Heidi, although the latter was never made. The last two became Shirley Temple hits a decade later. Baby Peggy made only nine features and two of them, Helen’s Babies and Captain January, have recently been preserved by the Library of Congress. 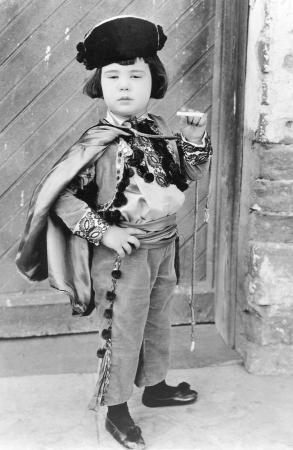 Baby Peggy specialized in film parodies, like this one of Carmen… 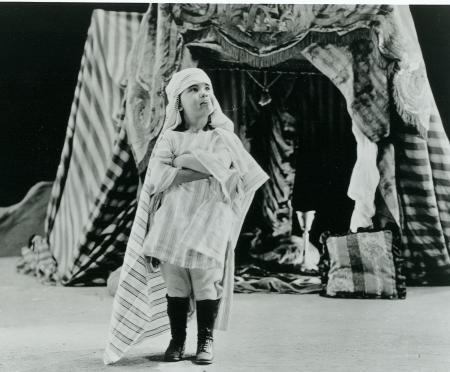 and this one of Rudolph Valentino in The Sheik.

Baby Peggy’s father, Jack Montgomery, was a real-life cowboy. With the decline of the Old West, many cowboys found themselves at the end of the cattle drive, Los Angeles. The bar where they hung out and swapped stories in the ‘teens was near one of the early movie studios, and soon they were being hired to do what was essentially their old job—only in front of a camera. For many years, these cowboys, proud to keep working on horseback and not have to take a “standing up” job, were the mainstays of the Hollywood stunt world—the riders you see making the Charge of the Light Brigade, or racing through Sherwood Forest, are cowboys.

One day in 1920, Jack’s wife, Marian, went along with a friend who worked as an extra, to pick up her wages at the studio. Marian instructed her 19-month-old daughter, Peggy Jean, to sit on a stool and wait for her while she watched the filming. Her husband, Jack, was a strict disciplinarian, and believed if you could train a horse, you could train anything. This included his own children, and he expected strict obedience from anyone within his circle. So, when little Peggy was told to sit still, that is what she did. Impressed by the 19-month-old toddler’s ability to obey instructions, director Fred Fishbach recruited her to star in a series of 2-reel (20 minute) comedies, the bread and butter of many a studio in the silent era. Jack was reluctant to leave his $7.50 day job doubling cowboy actor Tom Mix to chaperone his little daughter, but soon she was pulling down $300/month. Century comedies took one week to film, cost between $5,000 and $7,000 and each grossed about half a million dollars each, making Baby Peggy’s $75 weekly salary a remarkable investment. Her work week was six long and sometimes dangerous days, doing stunt work that no child would be subjected to in later eras. She never associated with any other children besides her older sister, Louise. One day, going late to the studio because of a hitch in the scheduled set construction, she saw a group of children playing, and asked Louise what they were doing. When told, she responded with genuine outrage, “Why aren’t those children working? Who will take care of their parents?”

Lured away from Century Studios, she signed a lucrative contract with Sol Lesser for a year, one and a half million 1920s dollars, and a 50/50 split on her films’ profits. Nationwide public appearance tours not only promoted her pictures, but products like the very first book-movie tie-in, a lavishly illustrated movie version of Captain January, along with Baby Peggy dolls and numerous product endorsements.

Many child actors are washed up at adolescence, but for Baby Peggy, the fall came much earlier, when her front teeth fell out, at six. She embarked on a vaudeville tour at $1500 a week that lasted as long as vaudeville did, but then, with no formal schooling and few prospects, her fortune, naturally, squandered by her parents and managers, stardom was over. The high life for the tiny star had consisted primarily of hard work. When her early films returned from their circuit, the economical Century Studio owners had melted the prints down to salvage the silver in the film emulsion, and many of her other films were destroyed in a studio fire, erasing most of Baby Peggy’s career from film history. It took Diana Serra Carey a long time to find a new career as a writer, a scholar of Western history, and of child performers on stage and screen, and to eventually reconcile with her childhood avatar, that adorable sprite, Baby Peggy. 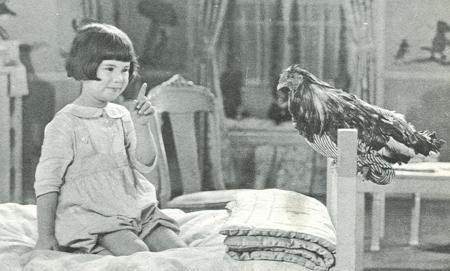 Richard Griffith, author of The Movies, a book I studied religiously as a child, called Baby Peggy “long forgotten” but he didn’t forget to include a photo of her in his book.

Diana Serra Carey is virtually the only surviving silent film star still making public appearances. Her unique insight into the lives and careers of young actors in her books Hollywood’s Children, What Ever Happened to Baby Peggy? (her autobiography) and Jackie Coogan: The World’s Boy King: A Biography of Hollywood’s Legendary Child Star make her an authority on a phenomenon often analyzed, but rarely from the inside out. Only the rare child star wants to remember those years, not of carefree fun in the studio, but grinding work and exploitation by parents and managers. She has been a friend of, and a mentor to many subsequent child stars, who have benefited from the experiences of this pioneer of film and film stardom.  When she died in 2020 at the age of 101, she was the last living silent film star.  It was a privilege to know her, however briefly. 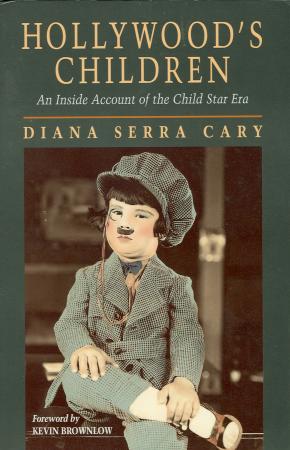 This newly restored print of Helen’s Babies made by the Library of Congress was premiered at the Pordenone Silent Film Festival in 2002 and shown there again in 2004. Baby Peggy may have been good at following direction and displaying emotions, but as you will see in Helen’s Babies, she has a real instinct for improvisation—she steals scenes from veteran Edward Everett Horton not just because she is cute, but because she is skilled. We’re so pleased to have shown this charming film, with the excitement of live music by Maestro David Drazin and the added attraction of the presence of its star.

After the enthusiastically received screening of Helen’s Babies, the elegant Ms. Cary graciously answered questions. The audience was curious about what it was like on the set of a silent film. So many of us have internalized the scenes from Singin’ in the Rain as the definitive representation of filmmaking in the 1920s. But Ms. Cary said that sets were quiet during shooting, the cry “Hold the hammers” signaled for silence amidst construction. Just because a film was silent didn’t mean you didn’t have to learn dialogue, she explained. A muffed line might not be a problem, but it was important that you were speaking proper dialogue. Most surprising was her description of the gagman’s role on the set. The most memorable scenes to me in the film are the sequences where Baby Peggy attempts to return some springy stiff collars to their circular box and tries to wipe a smudge off the nose of the sleeping Edward Everett Horton. In fact, those bits of business were supplied on the set by gagman Lewis Milestone, who would one day win an Oscar as the director of All Quiet on the Western Front. It was he who would recommend to Horton, don’t just pick up Peggy and set her on the bed, set her on your hat. The fact that such moments were the provenance of neither the director nor the scriptwriter was surprising. One question was whether she was really crying when she appeared to cry in the film. She said yes, each actor had their “crying music” which would always produce tears. For her it was “I’ll Take You Home Again, Kathleen,” “Danny Boy” and “My Buddy.” At the screening of Captain January the following day at the Sunrise Theater in Southern Pines, NC, when Baby Peggy burst into tears, David Drazin played “My Buddy” for her. After the screening, Ms. Cary said it made her cry then, too. 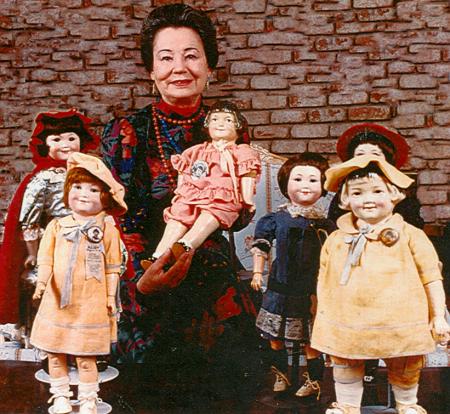 Diana Serra Cary with some of the Baby Peggy dolls sold in the 1920s during the height of her stardom.

For everything else you want to know, here is Tim Lussier’s Silents Are Golden Baby Peggy feature.

David Drazin, who played for the March 10, 2006, showing at the North Carolina Museum of Art, is a pianist and jazz archivist living in Chicago. His regular gig is with the Gene Siskel Center at the Art Institute of Chicago, but he has played in venues all over the country, and in 2003 and 2004 was invited to play at the world’s most prestigious silent film festival at Pordenone, Italy. He not only accompanied the curtain raiser, Daddy Don’t, a short silent film made with a hand-cranked camera by the Wisconsin Biograph Company at the University of Madison, Wisconsin, but he stars in it, too. In a 2005 review of David’s music for a retrospective of Yasujiro Ozu’s silent films, Chicago’s second most famous film critic, Jonathan Rosenbaum of the Chicago Reader, said, “the accompaniments of David Drazin alone are worth the price of admission.” Here is the link to the David Drazin website.

(Photos courtesy of Ms. Cary unless otherwise noted. Sources include her books as noted, as well as her Hollywood Posse).