These days, we tell our children to follow their dreams.  Not so during the Depression.  Free-spirited Johnny rubs his high society fiancée’s clan the wrong way when he says there are more important things than making money.  Grant and Hepburn’s sizzling chemistry kindle cinematic joy as they recognize each other as soul mates. Supporting eccentrics Edward Everett Horton, Jean Dixon, and Ayres as the alcoholic (secretly gay??) family heir complete the irreverent family circle. “Often underrated by comparison with The Philadelphia Story (both are based on plays by Philip Barry), but even better because its glitteringly polished surface is undermined by veins of real feeling, it is one of Cukor’s best films” (Time Out). 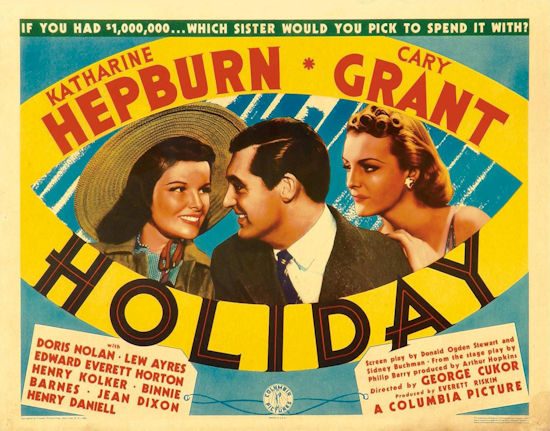 Holiday was based on a play by Philip Barry, known today primarily as the writer of this, and The Philadelphia Story, both made into films directed by George Cukor, starring Katharine Hepburn and Cary Grant.  Barry’s first published work was a story, “Tab the Cat,” when he was nine.  He went to Yale, and began writing plays, his first produced play was You and I in 1923, which reflected his fear that marriage would interfere with his artistic life.  He wrote several other plays, and then Holiday, in 1928.  Barry was inspired Hope Williams, a wayward debutante who had defied her family to act on stage.  She was “a skinny, androgynous New York society girl with close-cropped taffy-colored hair, a crooked smile, and an emphatic arm-swinging stride”  (Wikipedia).

Her understudy for the part was Katharine Hepburn.  Williams did not want her on stage, and she wasn’t, not in 229 Broadway performances.  Hepburn’s vocal coach introduced her to another footloose heiress, Laura Harding, and they became fast friends.  Hepburn was a Bohemian, with a brash manner, and after studying Williams on stage, and Harding in her private life, Hepburn perfected a character so indelible, you could no longer tell the difference between her and the real Park Avenue swells.  Filmed in 1930, and frequently revived on stage, Holiday remains one of Barry’s two greatest successes.  Remembered as the author of witty comedies, he wrote serious plays, as well, often on religious themes. 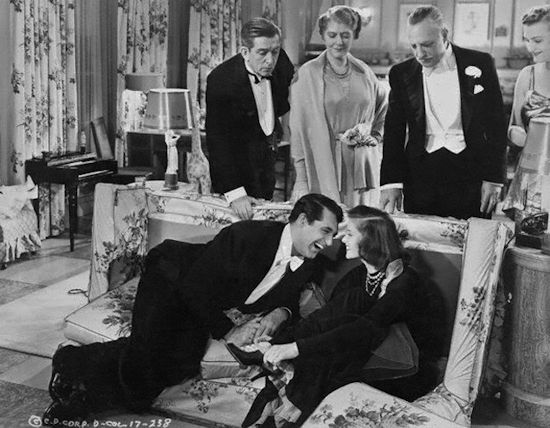 Hepburn used a scene from Holiday for her screen test for A Bill of Divorcement with director George Cukor, and he may have remembered her when it came time to cast the part.  Although Hepburn had won an Oscar for Morning Glory, her career was weathering rather a rough patch.  RKO wanted her to finish off her contract with a film called Mother Carey’s Chickens, but she bought herself out of it, and let herself be loaned to Columbia for Holiday.  Hepburn campaigned for the movie role, even though the studio preferred Irene Dunne, Joan Bennett or Ginger Rogers.  Bringing Up Baby, her last film with Cary Grant had been a critical success, but a box office failure (hard to believe!) and she had been labelled “box office poison.”  Columbia mogul Harry Cohn was persuaded to cast her in the part, partly because director George Cukor told him he was hoping to cast her as Scarlett O’Hara.  Columbia used the press agent slur as a marketing point, “Is it true what they say about Hepburn?” the ads asked. (Levy 103). 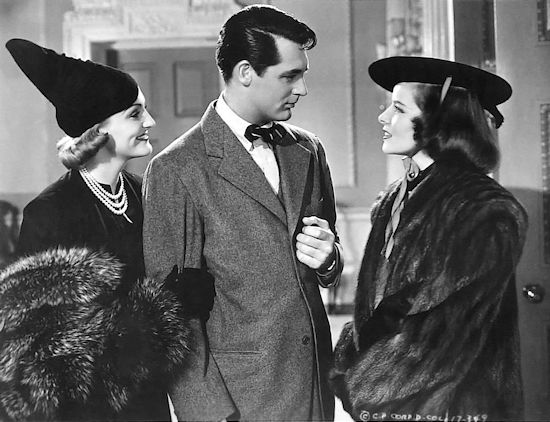 The script, by Donald Ogden Stewart and Sidney Buchman was faithful to the play, and to Barry’s dialogue.  Cukor saw both the comic and serious sides to the story, and was able to handle the swerve the characters take at the end with grace and ease.  It is, after all, a rather shadowy story of sibling rivalry disguised as breezy affection.  Hepburn and Grant have great on-screen chemistry, they are wonderful in all their films together.  Hepburn obliterated all memory of Hope Williams in the role, and now, with nobody to remember Hope Williams, the part is forever hers. Linda would become one of Hepburn’s best remembered heroines, combining her toughness, her wit along with a touching vulnerability.  Some authors insist that her reviews for the film were tepid, but We Gehring insists that her reviews were “generally glowing.”  Newsweek defended her, “Miss Hepburn’s answer: Brilliant playing in Holiday turns tables on critics” (Gehring 121). 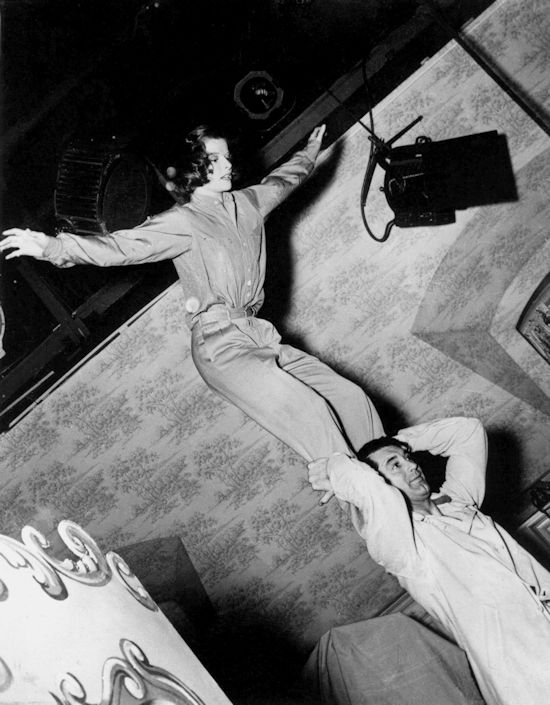 Cary Grant’s acrobatics are an unexpected delight in Holiday. Here is a rehearsal shot.

Screenwriter Donald Ogden Stewart had starred as Ned, the alcoholic Seton son, in the original Broadway production.  Cukor had wanted humorist Robert Benchley, who was somewhat typecast as an amusing, middle-aged alcoholic, for the part, but it went to Lew Ayres.  I made a rather unusual comment in my blurb for the film, proposing that part of the source of Ned’s drinking is that he is secretly gay.  But, a modern person has to wonder why this attractive young man feels so thoroughly alienated from the wealth and privilege of his class.  Is it just because he is bullied by his father into joining his father’s business?  He drinks because he is bitter, feeling himself an outsider from his family’s love of their status. Could it be something more?  Linda is tenderly protective of him, as if he has a secret that shouldn’t be revealed to the stuffy family. 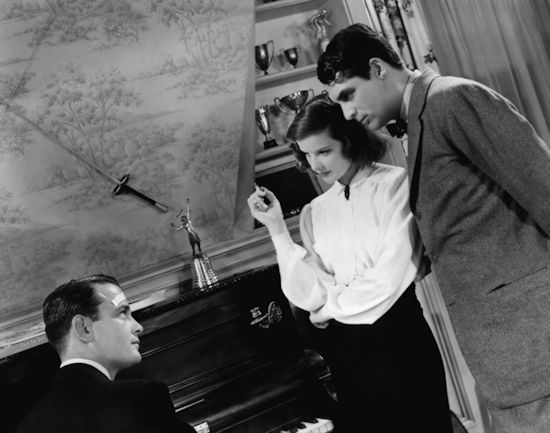 Even this posed still has an unusual angle.

The play had been written during the height of the 1920s prosperity, and Johnny’s point of view was that of an self-made man, looking into the homes of the privileged.  This was Barry’s experience, too.  He was from Rochester, NY, arriving as an outsider to the Ivy League.  By the time it was filmed the roaring 20s audience had morphed into a more cynical Depression one, who didn’t feel sorry for the rich who didn’t want to be rich.  Most of them were still smarting from an unasked for holiday from their jobs. The film was not a success, even though Barry thought it was “a brilliant and beautiful piece of work” (Levy 104).   Grant seems to have a great affinity for the role, born poor, he scrambled his way up the Hollywood social ladder to become a beloved and irreplaceable superstar.  But, in the 1930s he would now have three flops in a row, The Awful Truth, Bringing Up Baby and Holiday, arguably some of the films for which he is now much adored.  He got thousands of fan letters every week, but was feeling uncertain about his determination to free-lance as an actor, without a studio contract.  The poor showing for the film drove Hepburn out of Hollywood, and back to the New York stage, where she would begin to craft her personal comeback in Philip Barry’s The Philadelphia Story. 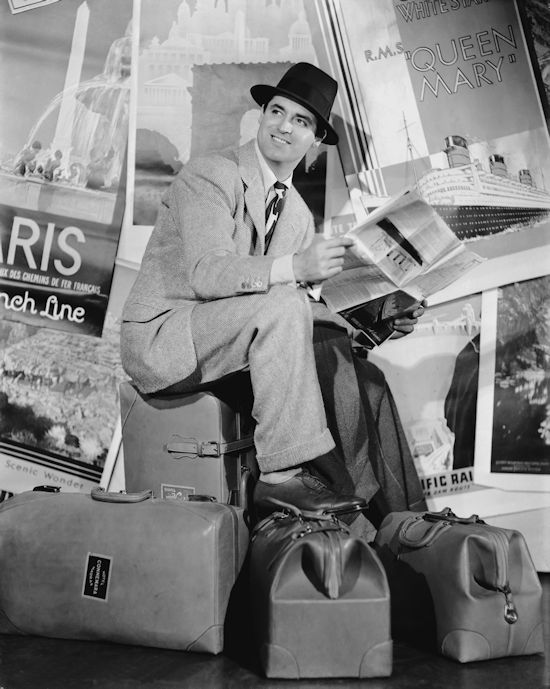 The wardrobe for the film was designed by Columbia head costume designer Robert Kalloch.  He studied and taught at what is now Parsons School of Design, joined the designer Lucile as a sketch artist, and became a couturier.  He arrived at Columbia, not as a newcomer, but with a prestigious career.  His wardrobe for Hepburn helped to create her signature on-screen style.  While Linda Seaton’s sister Julia wears rich fabrics with feminine details, Linda’s clothes are sleek and unfussy, characterized particularly by a demure, silk jersey long-sleeved evening gown.  To complement it, she wears jewels by “New York’s Society Jeweler” Paul Flato, a three strand diamond necklace, a sunburst brooch of canary diamonds and a pinky ring with three dangling diamond boules. In other scenes she wears a black enamel hand with a diamond cuff, an “initial clip in sign language” at the neck of her white blouse, while she waits with Grant for her family to return from church. 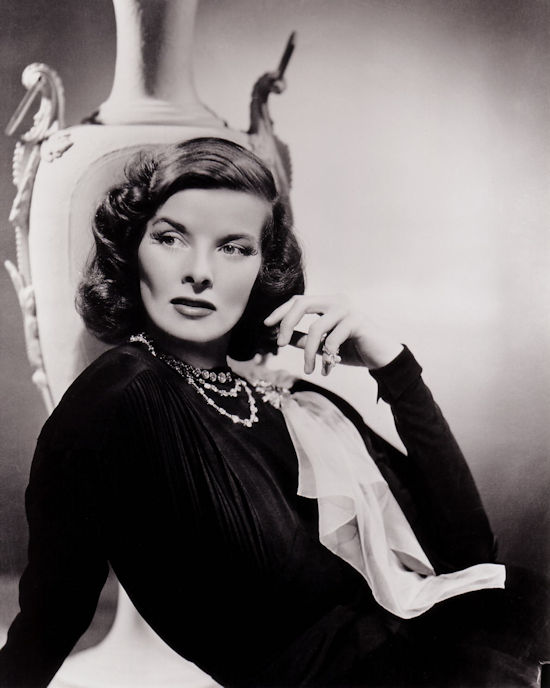 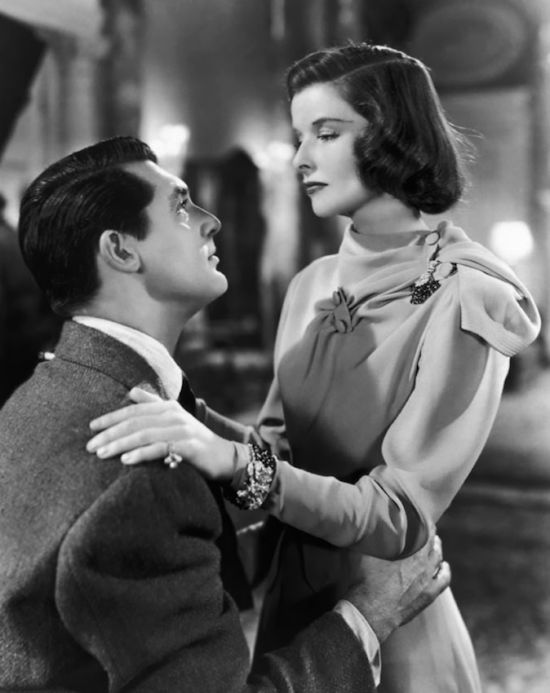 Peter Bogdanovich wrote, “One of the ineffably happy moments in my life was the afternoon of the wintery day I saw the last movie I would see in 1955 (although it was released in 1938, the year before I was born): Holiday, starring Katharine Hepburn, Cary Grant, Lew Ayres and Edward Everett Horton (whose dresser I had been just that summer) based on a play by the brilliant Philip Barry, and directed seamlessly—and superbly modulated—by George Cukor.  It was a high comedy (with a couple of “falls”) about the female black sheep of a millionaire’s family and the “radical” young man who wants to take a long holiday to find out why he’s working. After the film, as I walked home on the dark Manhattan streets, I was feeling buoyant, happier than I could ever remember, positive about the vast possibilities of life.  Over the next decade, I saw Holiday three more times, each with similar emotional reactions.  I told this to Cukor when we met in the midsixties, and I found the same sense of optimism and gallantry in him as in Holiday.  He credited the actors and the text and ‘I guess I was pretty good, too.’  He laughed.” 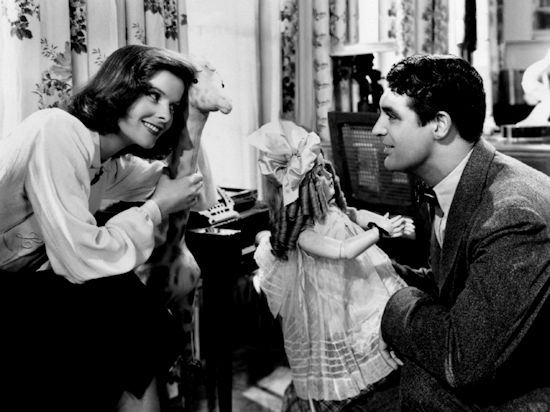 Holiday is different from the usual romantic comedy formula, in which seemingly mis-matched characters discover they are in love.  Here, the romantic couple have both idealized Julia Seaton, incorrectly granting her character a depth and amiability she doesn’t possess. Their shared love for the shallow Julia is the obstacle that needs to be overcome. Holiday is a uniquely American look at the moneyed aristocracy of Wall Street and Park Avenue.  “Barry sets up a conventional aristocracy at the beginning, tricks us into thinking that he wants Johnny to gain entrance to it, and then creates a second aristocracy that is identified not by money, but by wit, intelligence, education, culture, playfulness, liberality, flexibility and discrimination.  It’s an aristocracy of the spirit, and we know it’s worth belonging to—and that it is indeed a highly selective club—because it boasts Cary Grant and Katharine Hepburn among its members” (Vineberg 50).  I’m sure you will agree that moviegoers have spent their lives yearning to gain entry to that particular club. 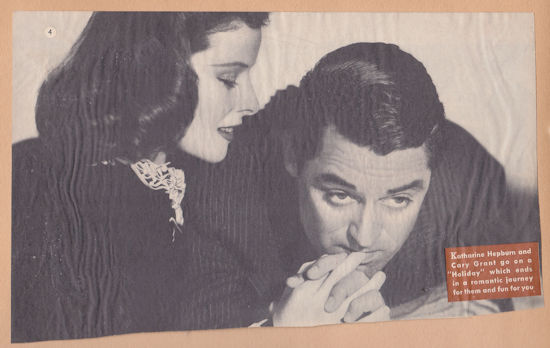 Here is a page from an anonymous movie star scrapbook in my collection. The caption says, “Katherine Hepburn and Cary Grant go on a ‘Holiday’ which ends in a romantic journey for them and fun for you.” 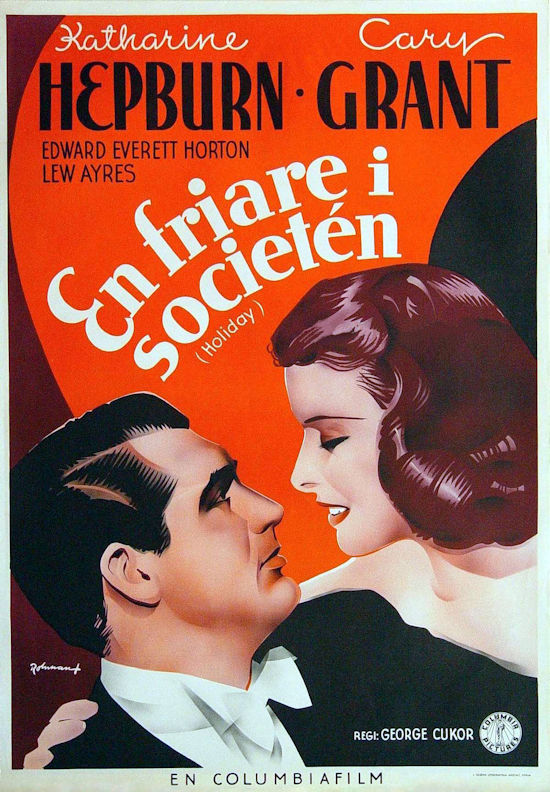 George Cukor: Master of Elegance by Emmanuel Levy, https://en.wikipedia.org/wiki/Philip_Barry, Who the Devil Made It by Peter Bogdanovich, Kate: The Woman Who Was Hepburn by William J. Mann, http://www.glamamor.com/2015/01/Holiday1938-KatharineHepburn-Kalloch/ (This link is broken). https://www.trufauxjewels.com/blog/paul-flato-jewelry-movies/?v=7516fd43adaa, https://www.jckonline.com/magazine-article/katharine-hepburn-in-diamonds-and-platinum-from-paul-flato-and-fulco-di-verdura/    Romantic vs. Screwball Comedy, Charting the Difference by Wes D. Gehring, High Comedy in American Movies by Steve Vineberg, Cary Grant by Marc Eliot