Three desperate housewives, needing cash, plot to loot the local shopping mall. The scheme is clever and believably low tech (no laser alarms) as the ladies, empowered by the stirrings of second wave feminism, harness their domestic skills to vanquish their piggish mates. Once tepidly reviewed, it’s now a cult favorite.

People often say to me, you must have seen every movie. But, no! There are many, many movies still to see. When I asked for suggestions for my “Get Rich Quick” series, this film was short listed by several audience members, including by Craig Lindsey, the film critic for the Raleigh News & Observer. I watched a number of suggested films I’d never seen, including Fun With Dick and Jane (the old version with George Segal and Jane Fonda) and The Hot Rock with Robert Redford, and felt they simply didn’t hold up. Still, all week long, people asked me “Have you SEEN this movie, I have never heard of it.” But this enjoyable little film is more interesting now, in retrospect, than it was when it was released.

I have a problem sometimes, with people who value “high art” as something more exalted than “popular art.” Serious works are all very well, but they rightly aspire to a timelessness, a deep meaning that transcends the moment. Popular art, like the film I’m showing tonight, might be considered trivial, and I won’t argue that it has the intellectual heft of Citizen Kane or The Godfather.

But, it does say something extremely interesting about the time in which it was made, in midst of the bra-burning second wave of feminism. The protagonists of this film are three women who have done exactly what society required. Perhaps, they went to college (although they are high school cheerleading friends) but, without the expectation of ever having an actual career. Then, they got married, had children, and something went horribly wrong. The men that they carefully selected for their earning and nurturing abilities turned out to be playing by a different rule book. And, although smart, attractive and capable, they find the skills they have for survival in a man’s world are useless. There is no Plan B.

Last week we saw Topkapi, in which Melina Mercouri, as Elizabeth Lipp, was a glamorous international criminal, capable of masterminding an elaborate robbery with wit, confidence and élan. Susan Saint James, Jane Curtin and Jessica Lange, beautiful and talented, are asked to be tentative, trod-upon and desperate. What a difference 15 years makes in the culture.

The talent on screen here is mostly courtesy of television. Director Robert Sheerer almost exclusively directed tv shows, writer Robert Kaufman was also a tv guy, with the exception of writing English language dialogue for the Vincent Price and Fabian movie, Dr. Goldfoot and the Girl Bombs directed in Italy by Mario Bava, and a few notable 70s films like Elliot Gould’s Getting Straight, the cop buddy film Freebie and the Bean with James Caan and Alan Arkin and Love at First Bite with George Hamilton as Count Dracula, which also featured Susan Saint James, in an Oscar-nominated performance (!).

The three leading ladies in the film tonight, although approximately the same age, arrived on screen through very different career paths.

Susan Saint James was signed by Universal to a seven year contract at the very end of the studio era. She hit it big on the glitzy tv show Fame Is The Name of the Game in 1966 with Anthony Franciosa (for which she won an Emmy) and also had a recurring role on Robert Wagner’s It Takes A Thief, Both her co-stars on these shows shared her “twilight of the studio contract players” history. From 1971-1977 she co-starred with Rock Hudson in the popular mystery series McMillan and Wife, and then co-starred with Jane Curtin on Kate and Allie from 1984-1989. No doubt her chemistry with Jane Curtin in tonight’s film helped them to be cast together on this popular sitcom, or perhaps they were teamed because Saint James is married to Saturday Night Live executive Dick Ebersol, whom she met while hosting the show in 1975. Saint James been nominated for Emmys many times, without ever winning.

This was the first film Jane Curtin did after leaving Saturday Night Live in 1980, where she was one of the original “Not Ready for Prime Time Players.” She dropped out of college to pursue a comedy career, and joined a comedy group “The Proposition.” On SNL, she often played the straight woman for the more free wheeling comics, a role that reflected her off-screen reserve; she was never a part of the notorious backstage party scene. She has had a long career in television, winning back to back Emmys for her role as the more conservative half of the divorcée team raising their children on Kate and Allie. She co-starred with John Lithgow in Third Rock from the Sun from 1996-2001. She’s appeared on screen most recently in this year’s I Love You, Man. She still works regularly; I saw a teaser for her appearance on a sitcom only last week. Interestingly, like Saint James, she is a Catholic from a Connecticut family.

Jessica Lange, however, has been a genuine movie star, from the moment she was clutched in King Kong’s paw and taken up the World Trade Center Towers in the 1976 version of the classic film. She studied mime in Paris and danced at the Opera Comique, and was working as a model when she auditioned, with many others, for Dino De Laurentiis, to play Fay Wray’s part in his new version of King Kong. But, the film was so thoroughly panned, it almost destroyed her career. She spent three years struggling, before landing a small part as the Angel of Death in All That Jazz. How to Beat the High Co$t of Living was only her third film, soon to be followed by Tootsie, Frances and The Postman Always Rings Twice with Jack Nicholson. She has had a distinguished career, and is a two time Academy Award winner (for Tootsie and Blue Sky) and just won an Emmy for her portrayal of Big Edie in the HBO film Grey Gardens.

The score was composed by Patrick Williams, who composed many movie and tv themes, his most famous being the title song for The Streets of San Francisco. He also wrote the theme song for the Mary Tyler Moore spin off, Lou Grant and scored many episodes of both shows. He was also Billy Joel’s collaborator on his hit album, “The Stranger.” Jazz players Hubert Laws (flute) and Earl Kluge (guitar) are featured along with bass player Neil Stubenhaus. The soundtrack was issued on vinyl by Columbia, but has never been on cd. It’s odd that these funky tracks accompany a story about suburban white women, but maybe the whole culture was funkier back then.

I hope you enjoy this modest, well-plotted caper film, which has a little more to say about its era than was intended. Thirty years ago–shockingly!–seems like a century in the culture. One audience member pointed out that even though the film is set largely in a shopping mall, there is no product placement! And, Jessica Lange’s “happy” ending would not be considered so today. Even the well to do people live with an interesting modesty, with an ominous line about one character going to a “senior citizens for Reagan rally” echoing as a not-so-funny joke. Melina Mercouri’s distracting laughter in Topkapi has been replaced with a more crass diversion…the one shot I wish had been edited out of the movie, if it was really meant to be on the side of the feminists. But, this film, made by men to gently tease women, was meant to be consumed at a moment of economic crisis and forgotten, like so many others. Without home video, the luxury of a perpetual reexamination of our culture through cinema would be impossible. 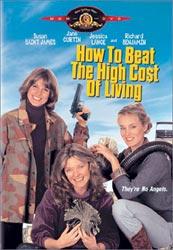 Sources include www.imbd.com, www.wikipedia.com, The Film Encyclopedia by Ephraim Katz and http://dougpayne.blogspot.com/2009/05/patrick-williams-how-to-beat-high-cost/ (May 8, 2009).