Nicole is the heir to a grand collection of forged art, courtesy of her rascally father and grandfather.  When a “Cellini” Venus is leant to an exhibition and is unexpectedly subject to examination for the gallery’s insurance, she hatches a plan with a society burglar to heist it.  Audrey is impossibly chic in her Givenchy wardrobe, O’Toole drives a yummy butter yellow Jaguar, and the whole Parisian confection (filmed in August, when the city was empty) is simply delicious 1960s glam. Venerable production designer Alexander Trauner commissioned the best art forgers in Paris to create a museum of “masterpieces.”  Love me a low-tech robbery, too, with a boomerang, a magnet and a mop bucket.

How to Steal a Million was a movie I saw and loved in a theater and pasted numerous clippings in my tween scrapbook.  I adore a caper film, and the 60s had so many delightful ones.  My favorites, like Gambit, Topkapi and this one, had a woman, not as a girlfriend, but as an actual participant, which was thrilling.  I loved Audrey Hepburn, already, thanks to Saturday Night at the Movies on tv, which introduced me to Roman Holiday and Sabrina, and I watched My Fair Lady 1 ½ times through in the theater at one sitting in 1964 (Mom was not pleased).  I loved Audrey, and her Givenchy wardrobe, in this film so much, that, in my earliest days of learning to sew, I tried to reproduce, with limited success the fashions in this film.  Tattersall check white wool coat dress?  Perfect for middle school in Cleveland, Oh, don’t you think? 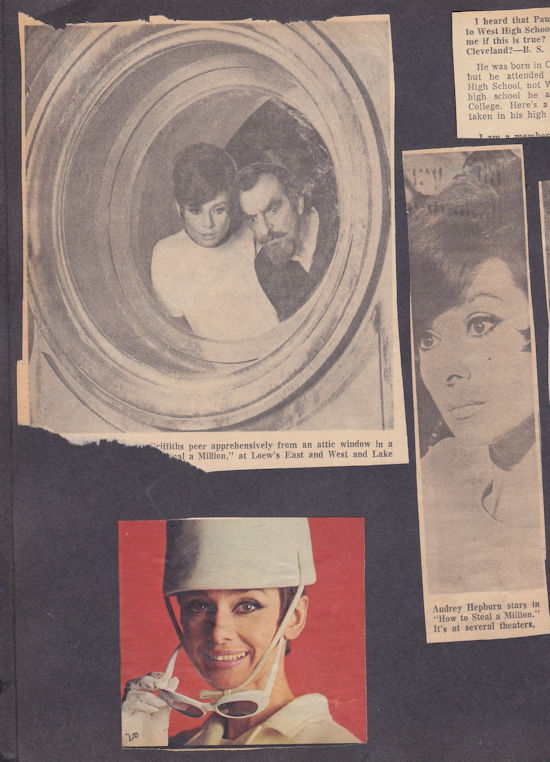 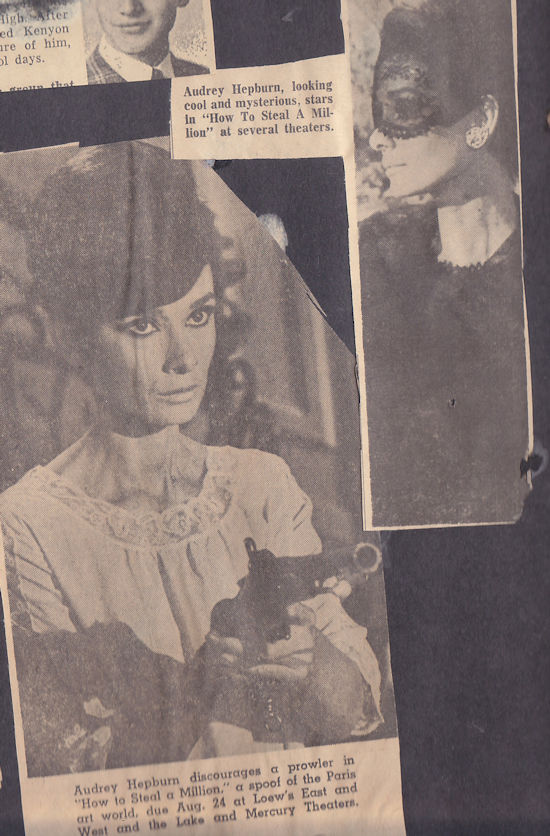 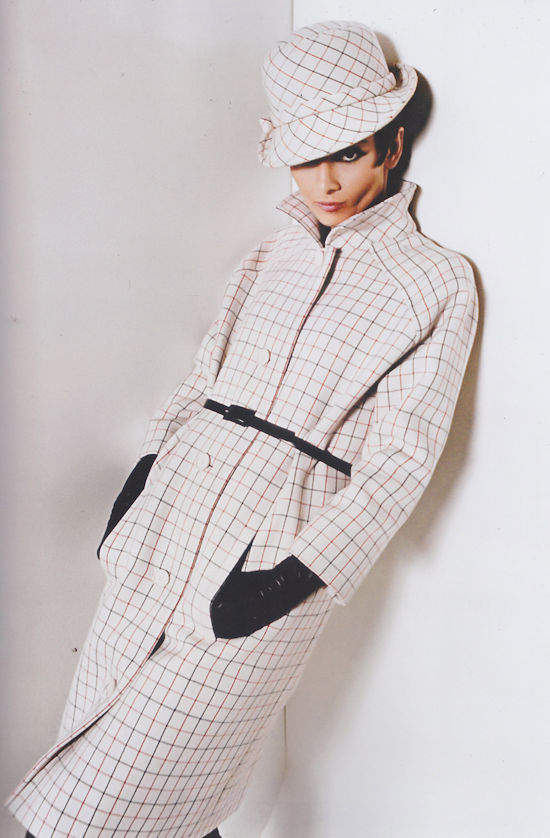 Director William Wyler had discovered Audrey Hepburn and cast her in Roman Holiday, the enchanting film which made her a star, and for which she won a Best Actress Oscar in her first leading role.  Venus Rising, (the title would change) was based on a short story by George Bradshaw and would be their third film together He also directed her in The Children’s Hour.  He had veteran Harry Kurnitz (who had once collaborated with Billy Wilder) write the script, which Wyler said, “Yielded a twitter a minute” (Madsen 380).  He was excited to be working in Paris, and shooting on a French schedule, noon to 7:30 p.m. without any breaks. 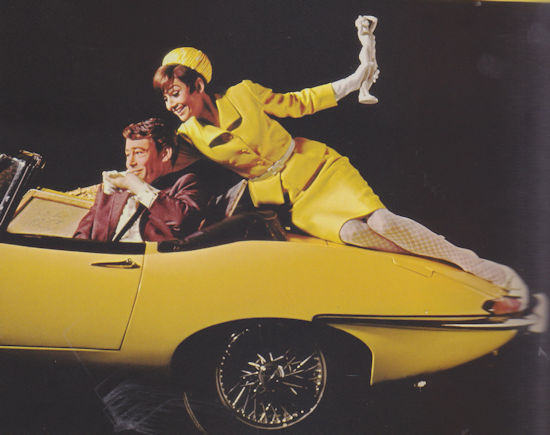 He was keen on French production designer Alexander Trauner to design the art museum which would be a major set.  Wyler worried that renting fine art for the gallery walls would strain the budget, but Trauner told him not to worry.  By guaranteeing a huge amount of money, as well as anonymity, he engaged some of the best forgers in Paris, including, rumor had it, Elymr de Hory, one subject in Orson Welles’ F for Fake.  “The paintings were not exact copies.  Where Renoir had three nudes, the fake Renoir would have two and the canvas to be of a different size.  A Trauner Cezanne was called Portrait of Madame Nemours, a Goya was titled Pilgrimage to San Isidro (a Californian’s in-joke on the U.S. Mexico border crossing at Tijuana).  The sculptures included a full sized Maillol, two Giacomettis and the film’s marble star—a twenty nine inch replica of Cellini’s Venus Rising “(Madsen 381).   They were eventually displayed at New York’s Parke Bernet Galleries, where they could be quickly authenticated as fake by their modern materials. 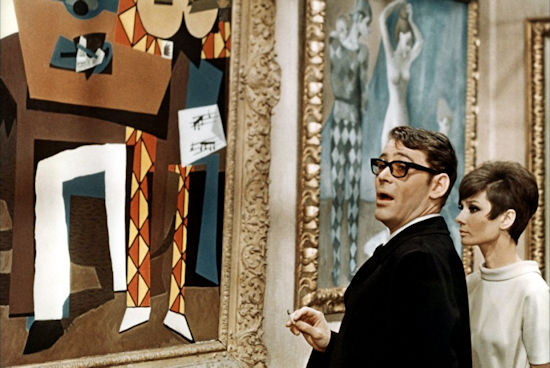 Hepburn was pleased to be filming in Paris again, and with a director of whom she was understandably fond.  She was also thrilled to be acting opposite Peter O’Toole, a starry actor in her own age group.  As much as I love Audrey Hepburn, it is so disappointing that in most of her romantic roles, she is opposite actors old enough to be her father.  Humphrey Bogart, Cary Grant, Gary Cooper, Fred Astaire, Rex Harrison, if only they weren’t so inappropriately old…but of course, in Hollywood, nobody thinks so.  Much was made of the fact that Audrey was three years older, at 36, than her 33 year old co-star, but I think it’s more than suitable.  Her salary was $1 million.  She was able to request one of her favorite cinematographers, Charles Lang, who had also photographed Charade.

The wardrobe was by her favorite, Givenchy, with an accessories assist by André Courreges, who designed her crazy hats, and gigantic sunglasses by Oliver Goldsmith. Her hair was designed by Alexandre of Paris, the style is called “Coupe Infante ‘66” (classiq.me) and her make-up was designed by Alberto De Rossi. All her jewels, real diamonds, are by Cartier. Audrey and Hubert de Givenchy made seven films together, and they had a lifelong friendship.  They met when she was looking for couture clothes for her character in Sabrina, she was 24, he was 26, and she became his design muse.  “His are the only clothes in which I am myself” she said in 1956 (Keogh). Their relationship was almost like a brother and sister, outlasting both her marriages.  He created a perfume for her, L’interdit, which she promoted with her image for free (much to the annoyance of her first husband, Mel Ferrer, who thought that was taking the friendship too far).  Givenchy designed the dress for her second wedding, her sons’ christenings, and their christening gowns, as well as other clothes for her personal wardrobe, and he was one of the executors of her will after her death from cancer in 1993.

“At the bar at the Ritz, with the veil—that’s one of the great moments in fashion in the movies” said Tim Gunn (Will 191).  With silver glitter eye shadow and the real glitter of Cartier diamonds, Audrey is breathtaking.  The incredible black lace dress recently sold for 60,000 pounds at auction, with half the proceeds going to UNICEF, the charity to which she devoted her final years. 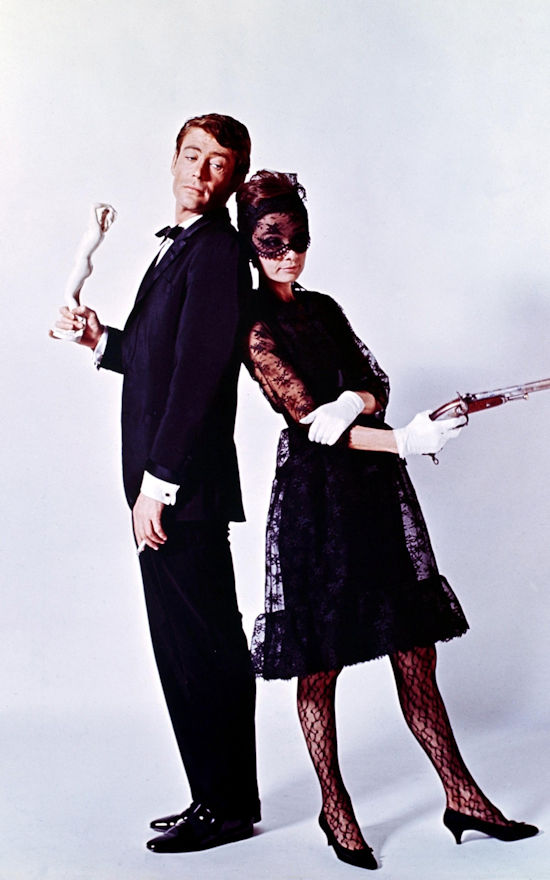 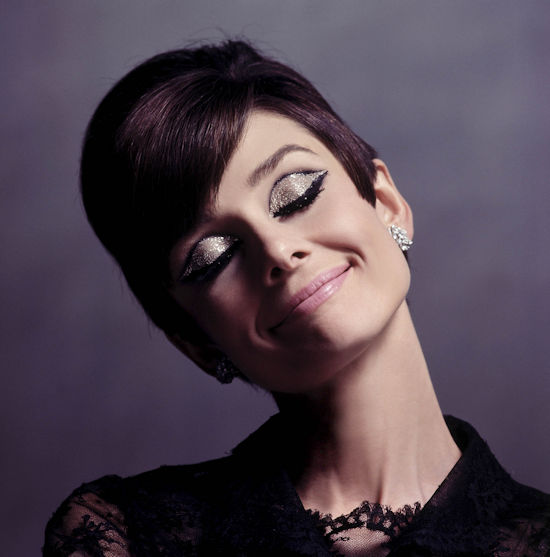 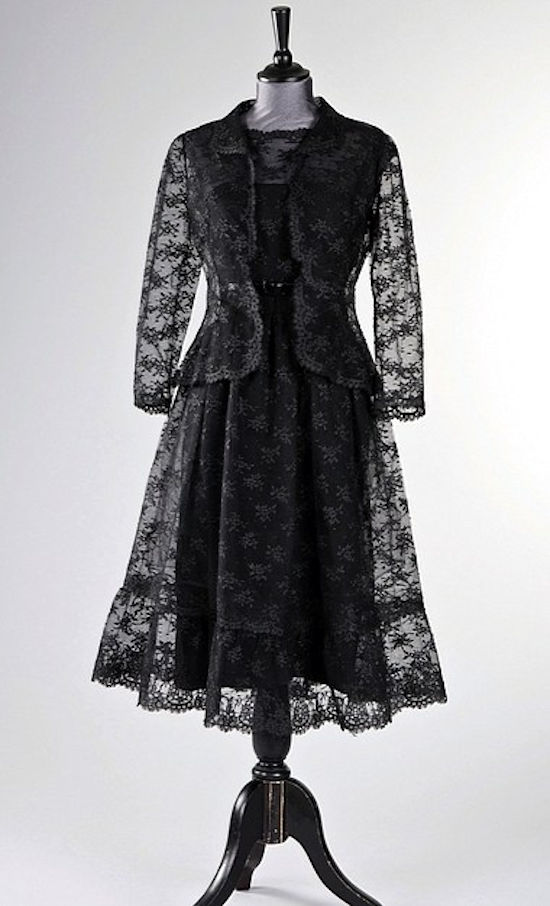 Peter O’Toole did not want to be typecast as tortured loners in serious dramas like Lawrence of Arabia and Lord Jim, feeling it would limit his career.  He welcomed the script’s elegant atmosphere, and the chance to play a “Cary Grant” sort of character, opposite a glamorous Audrey Hepburn.  Gossip mongers sought signs that the attractive co-stars were having an affair, but, in spite of the fact they got on splendidly, it likely never happened.  They found each other amusing, so much so that retakes were necessary because of their laughter, especially during the eleven days they spent filming in the confined space representing a broom closet.  “Neither of us was Herculean or Junoesque; nevertheless, it was a tight fit.  We were pretty close and we talked a lot and I found I liked her a great deal” said O’Toole (Woodward 222).  Wyler remarked, “They react on each other like laughing gas, and the trouble is they’re in almost every scene together” (Harris 215).  This certainly must contribute to the bubbly atmosphere of the film.  His quip about her Givenchy wardrobe was an ad-lib. 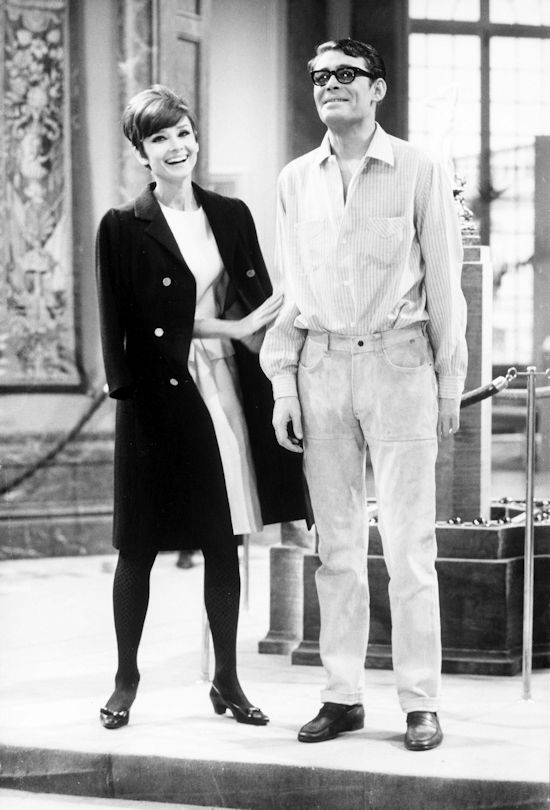 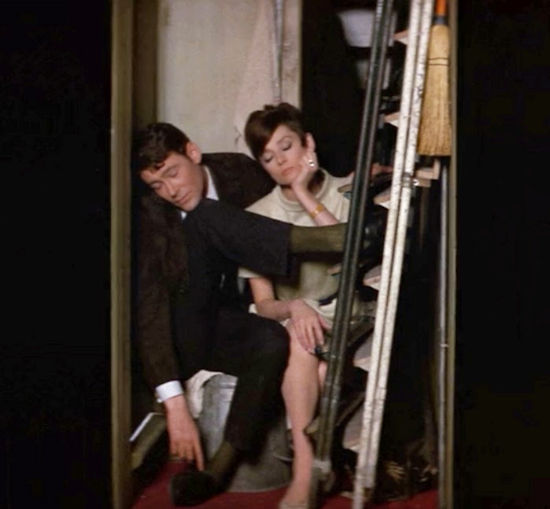 His Parisian nights were wild, as he was a serious drinker, and the late hours sometimes took a toll on his face, leading Hepburn to wonder, “what does he do with his nights?” (Sellers 158).  His memory was sharp, though.  When one scene wasn’t working after numerous rewrites, O’Toole suggested they go back to the original.  Nobody could even remember what it was, but O’Toole still knew the dialogue by heart.  “Wyler laughed and said, ‘That was good, why didn’t we use that?’ and it went back into the picture (Sellers 159). 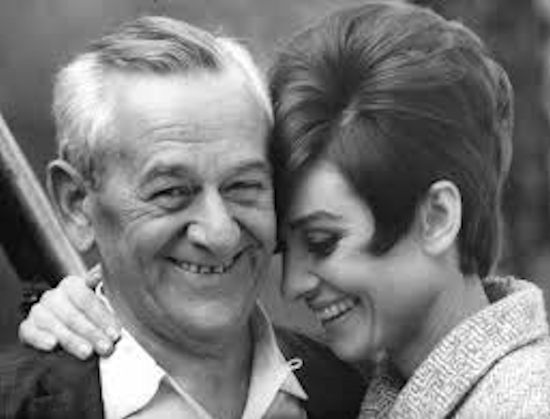 George C. Scott was originally cast to play the Eli Wallach’s role.  But, when Scott refused to be on time for the first day’s shooting, Wyler fired him while he could still be replaced.  “I think he was a bit surprised” Wyler said later (Madsen 383). Charles Boyer plays the art dealer who has hired Simon to authenticate the Bonnet Collection. Marcel Dalio, who was the manager of Rick’s Café in Casablanca has a bit part as a South American collector. Hugh Griffith got many laughs as Nicole’s mischievous father.

When the lights went down in the Carolina Theatre, I realized with a little thrill that I was seeing this film on the big screen for the first time since I was thirteen. How to Steal a Million remains a pleasure. Audrey’s captivating smile and her flirtation with Peter O’Toole are so lovely. Her elegant wardrobe is sophisticated 60s; these fashions remain the pinnacle of style. It is hard to be unhappy after seeing this delightful film.

Yet, it was not well reviewed at the time.  What is wrong with people?  More of the same, critics grumped, too much like Topkapi or Gambit, two other films I adore.  In her 1993 obituary in People Magazine, Hepburn said of her career, “People associate me with a time when movies were pleasant.  When women wore pretty dresses in films and you heard beautiful music.  I always love it when people write me and say, ‘I was having a rotten time, and I walked into a cinema, and saw one of your movies and it made such a difference’” (People, February 1, 1993, p.64).  I hope this “strawberry shortcake of a film” as Judith Crist called it on the Today show, does that for you, as well (Vermilye 188). 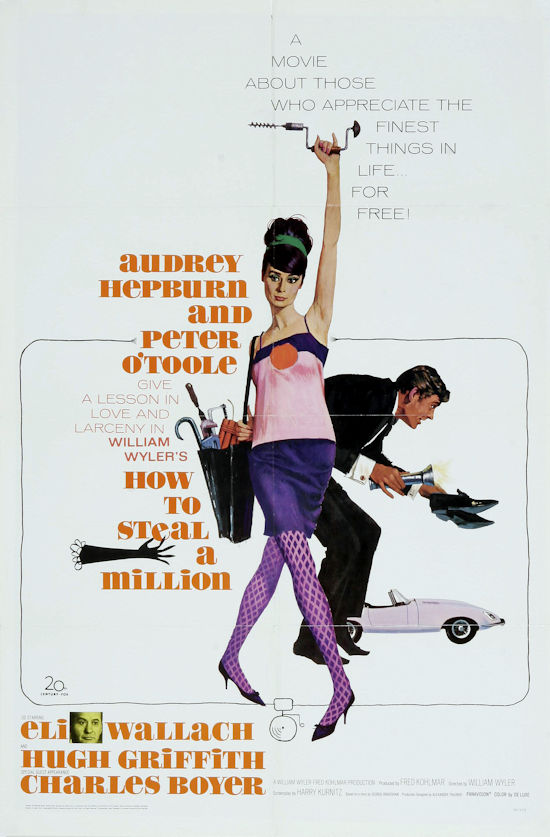