Giovanni is living La Dolce Vita in Rome, and now he’s in debt up to his eyeballs.  Reveling in the mid-century high style driving its hero to the poorhouse, Il Boom is a sharp satire of post war strivers, from DeSica, an icon of neo-realism.  “Real people caught in a surreal world, reacting in recognizable ways to a society rapidly spinning out of control makes Il Boom so vibrant, funny, and disturbing (Village Voice).

Rialto Pictures, headed by Bruce Goldstein, head programmer of Film Forum in NYC has been in the vanguard of rediscovery.  Il Boom is one of a continuing roster of pictures that, for one reason or another, was never released in the U.S.  Many others only played the big cities, which, 50 or 60 years ago, probably did not include Raleigh, N. C.  “Il Boom lacked the international star power of subsequent commedia all’italiana classics, including De Sica’s own Marriage—Italian Style (1964) with Sophia Loren and Marcello Mastrioanni,  and Il Boom never received a U.S. release, but in many ways it reflects upon and criticizes American materialist values much more than the majority of Italian imports of the era” (filmjournal.com). So, welcome to the Raleigh premier of this film.

Rome was bombed extensively during WW II, by the US, the British and the Germans.  But there had always been a life force in Rome.  “To live life alla Romana has meant different things at different times, but among those meanings has always been, surely, to live fully and sweetly, in beautiful form and happy company, with an attitude of knowing-but-not-entirely-caring, at a high rate, in plain view, steeped in confidence and elan and flair, and liable to cause jealous pangs everywhere else” (Levy xvii).  After the devastation of WW II there was “Il Boom” an economic miracle which roughly encompassed 1958-1964.  By 1962, Italy had repaid all of the billions of dollars loaned in the post-war Marshall Plan (Levy 196). The economy urbanized, high rises shot up, and people left the rural countryside in droves.  There was no longer a need for wartime heavy industry, and factories converted to consumer goods.  Vespas and Fiats appeared like mushrooms after a storm. Everyone aspired to participate in the high wages and materialistic pleasures, but not everyone could afford them, which was a boon for Italian comedy films.  Buying tickets for the movies was itself a non-essential luxury, in which people viewed and aspired to other non-essential luxuries (Gunsberg 60-61). 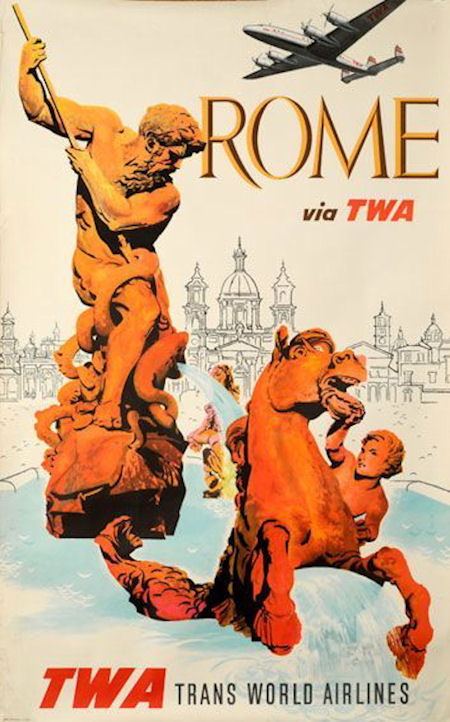 Roman Holiday in 1953 signified the great city’s rebirth on the world stage. “It made Rome look the very best place on earth to cut loose for a few days, just a few years after all the world took pity on the Romans with their stolen bicycles and handmade shoeshine boxes and pawnshops filled with bed linen and socks” (Levy 113).  By 1960, Rome was the place to be.  Tourists threw change into the Trevi Fountain, after the Hollywood romance, Three Coins in the Fountain (the theme song crooned by Frank Sinatra) became a smash. The Cinemascope photography in Three Coins... is so stunning, it made me want to jump right on a plane to 1954 Rome, although the plot made me want to tear my hair out.  Ben Hur and Cleopatra, two mega productions, filmed in the Italian capital.   In the wake of the A-listers were cut-rate actors, plunging into sword and sandal epics and cheapie Westerns and monster movies.  The outdoor spaces of the Via Veneto were clogged at all hours with Hollywood actors and Rome’s glitterati, as well as the city’s flotsam and jetsam. They were tailed by aggressive photographers, soon dubbed paparazzi.  Journalists scrawled late breaking scandals, and messengered copy to their nearby offices by speedy Vespa. Romans called the time the anni caldi, the Hot Years. 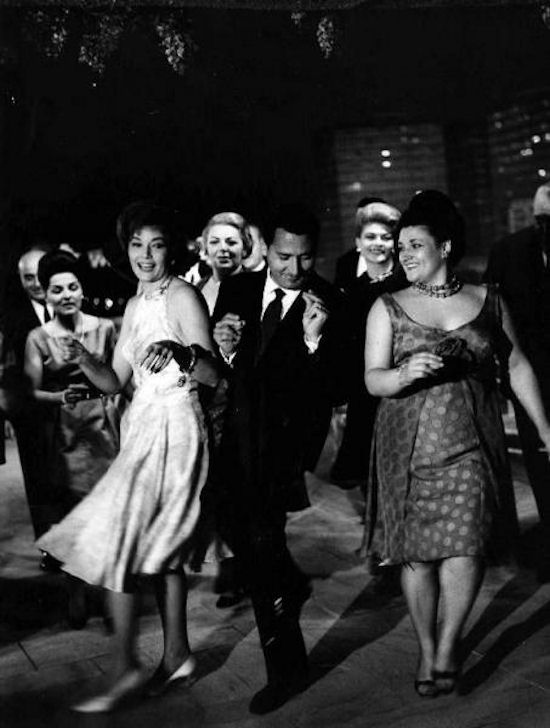 Rome’s nightlife blossomed after the death of the conservative Italian pope Pius XII.  The city became a perpetual party, frolicking on the ruins of the postwar Open City.  In 1958, Fellini decided, after many false starts, to try and describe seven days and nights in the bubbling caldron of Sex, Scandal and Catholicism that was Rome.   La Dolce Vita is the diary of that time, incorporating real life scandals, (like bombshell Anita Ekberg’s dip in the Trevi Fountain) into Fellini’s whirling imagination.  The film portrays the void beneath the gaiety, but Fellini was painting a picture, not judging a sin. 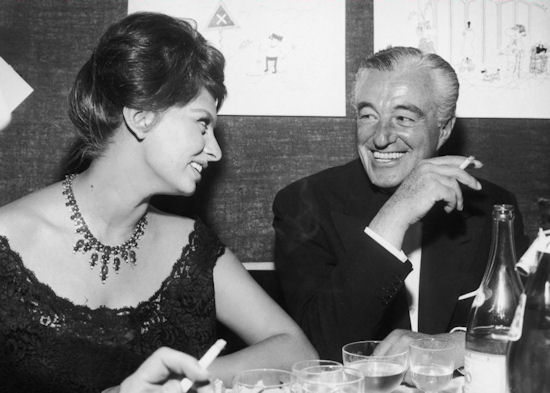 Sophia Loren and Vittorio De Sica on the town.

Il Boom is directed by Vittorio De Sica, a major neorealist director.  But first, he had been a matinee idol in the 1930s, “the Italian Cary Grant” in what were called the “white telephone films” as Italian cinema attempted to recreate the gloss of Hollywood moviemaking under Mussolini’s watchful eye—the dictator was a huge movie fan, writing gushing fan letters, and even proposing marriage to American starlet Anita Page.  (Levy 58). DeSica had started out as an accountant, but his father insisted he abandon the profession for show business, in what Martin Scorcese calls in Mi Viaggia in Italia “surely a first in the history of the world.” Screenwriter Cesare Zavattini had discovered a book he thought director De Sica would find appealing after his earlier neo-realist success, Shoeshine. Little from the source novel for The Bicycle Thief migrated to the screenplay, since the main character was a “disgruntled and supercilious artist who opines the most reactionary prejudices about the poor” (Cardullo) and who owns ANOTHER bicycle when one is stolen. De Sica’s vision synthesized two of his idols, King Vidor, whose silent film, The Crowd dealt with the universal needs and desires of the working poor, and Charlie Chaplin. Chaplin himself had grown up in bitter poverty, and films like A Dog’s Life and especially, The Kid, evoke the universality of being desperate and broke. Chaplin was a great admirer of De Sica’s as well. Appropriately, French film critic Andre Bazin concluded that “the Neapolitan charm of De Sica becomes, thanks to the cinema, the most sweeping message of love that our times have heard since Chaplin.”

De Sica’s heroes, in his great neorealist trilogy, Shoeshine, The Bicycle Thief and Umberto D are not unique, or heroic compared to other men, but told one story of countless stories. They are a trio of perhaps the saddest movies ever made.   Zavattini was his indispensable scriptwriter and collaborator for all three films. Shoeshine, like Roberto Rossellini’s groundbreaking Open City, had been a failure in Italy, where film critics and audiences alike were contemptuous of filmmakers who showed the underside of Italian society. Shoeshine won an American Oscar for Best Foreign Film (as would The Bicycle Thief) but was denounced in the Italian press as “stracci all’estero” –rags for abroad.

De Sica did not entirely abandon his Neorealistic principals when making his comedies.  In Il Boom, the fun people are having seems compulsory, and tightly linked to consumption, whether in the pleasure palaces of restaurants and parties, or using the brand name products liberally splashed across the screen.  This was an era when voluptuous female bodies became aspirational goods, in the persons of actresses like Sophia Loren, Anita Ekberg and Gina Lollobridgida called maggiorata (curvy girls).  It’s kind of hilarious that in this film, Alberto Sordi’s body is also commodified, just not the more usual, sexual part. 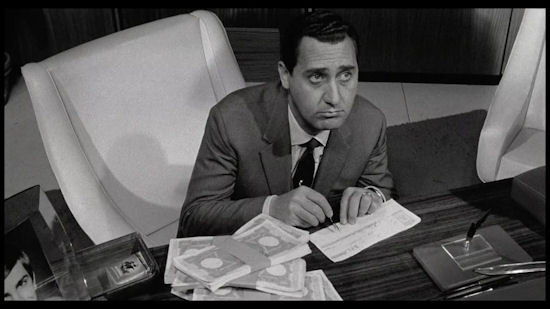 Alberto Sordi was born in Rome. At 13, he won an MGM contest by imitating Oliver Hardy, and later got a job dubbing Hardy’s voice when Laurel and Hardy’s comedies were released in Italy (Mussolini was also a big Laurel and Hardy fan). Sordi became a comedian in music halls and then legitimate theater. Sordi began acting in films in 1938, and over the course of a long and prolific career became one of Italian movies most beloved stars. He starred in a couple of early Fellini films, The White Sheik, and I Vitteloni, and often played comic characters satirizing Italian society.  During the years of Il Boom, he was a representation of the everyman Italian, a link back to DeSica’s neorealist films.  Like many Italian actors of the day, he had a few small roles in English language films but was unappreciated outside of Italy, where he was beloved.  One of his biggest hits was the 1950s comedy Un Americano a Roma, which he co-authored.  He played “Nando, a typical Roman of his time, who strove to emulate the Yanks infesting his hometown by speaking in American slang, walking like John Wayne, eating cornflakes with ketchup, even threatening to kill himself if he couldn’t get a visa to travel to the United States” (Levy 119).  The popularity of the film inspired a hit song “Tu Vuo’ Fa’ l’Americano” (“You want to act American”) sung by Sophia Loren in It Started in Naples and used unforgettably in a giddy moment in The Talented Mr. Ripley.  Sordi never married and died at the age of 82. 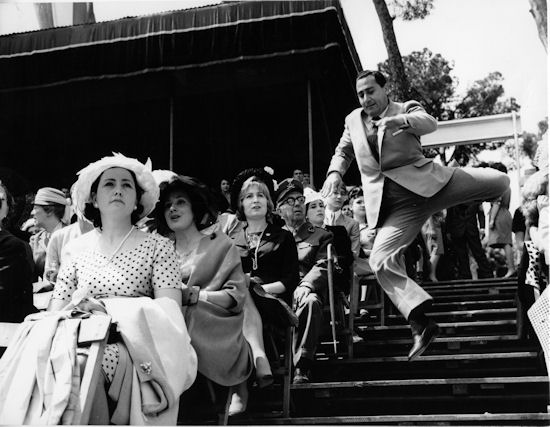 “Sordi was brilliant:  desperate, haughty, boisterous, horrified, scheming and cowering in turns.  And the situation was entirely credible: an economic upturn, an overconfident middle class, excessive reliance on credit and ruthless capitalism that would actually devour a man, starting with his eyeball” (Levy 347).

“The irreverent satire in which a man is asked to “give up his right arm” to pay off his debts and maintain his bourgeoisie way of life, feels as if it was made to address the current crisis promised by the GOP’s health care reform which has had cynical politicians suggest that people can and should give up “creature comforts” like telephones and medical visits in order to stay alive. When the film was released in 1963, it was addressing the needs that rose in Italian society due to the miraculous economic boom of the title which brought the promise of high rises and new cars, but also the voracious appetite of capitalism. In 2017 its mordant comedy verges on tragic foreshadowing as De Sica seems to have predicted what the world would turn into in the decades to come. The film questions the system of priorities that shaped Italian society all the way up to Berlusconi, but the fears at its center have become universal” (Stage Buddy.com) 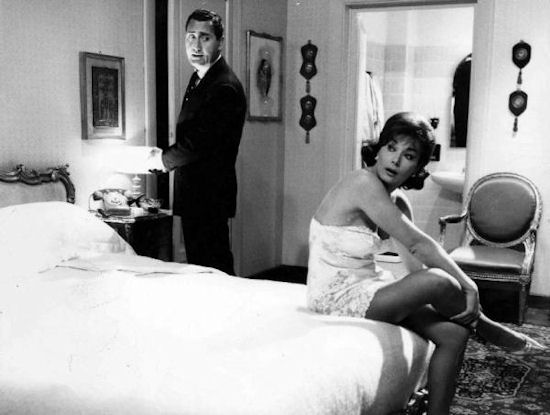 “Il Boom was written by Cesare Zavattini, the great Italian critic and screenwriter who also wrote The Bicycle Thief, Shoeshine, and Umberto D. It’s interesting to learn that the original script, written years earlier, was set in the same desperate working-class milieu as those previous films. The concept still works perfectly in a bourgeois setting, because De Sica and Zavattini nail how money and power infect almost every human interaction; they paint a portrait of a culture in which everything is transactional. It turns out that this doesn’t happen only in war-ravaged societies on the brink of collapse. Even in a time of prosperity, everyone’s out for himself…The film is also something like porn for anyone interested in interiors, whether you like sleek mid-century designs or prefer huge apartments cluttered with faux antiques. And yet there’s nothing alluring about the world the movie presents. This is not La Dolce Vita, which two years earlier fascinated viewers with its portrait of hedonistic abandon — and slowly revealed the emptiness beneath. Maybe that’s why Il Boom didn’t hit it big: It makes no attempt to seduce us; we see the spiritual corruption from the first frame… It’s that combination of qualities — real people caught in a surreal world, reacting in recognizable ways to a society rapidly spinning out of control — that makes Il Boom so vibrant, funny, and disturbing” (Village Voice). 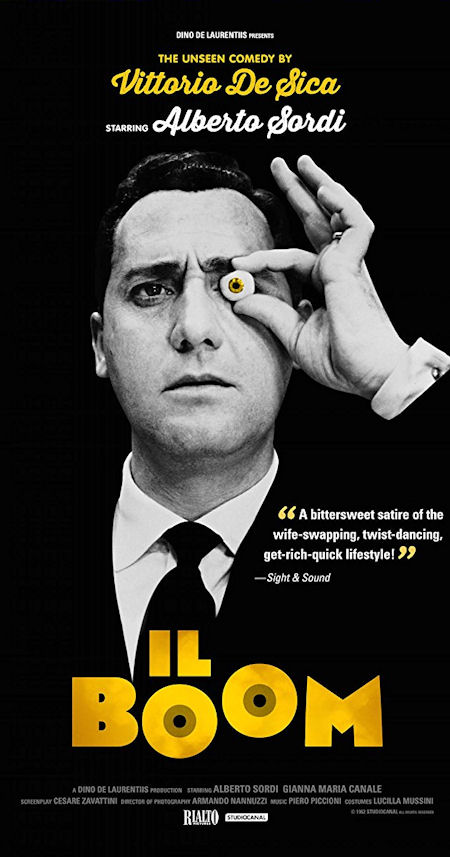