The movies have never had another auteur quite like Mae West, who as early as 1934 was being called the greatest female impersonator of all time. She not only crosses the line as far as acceptable female behavior, but crosses racial lines as well, as she bonds with her Greek chorus of black maids.  In I’m No Angel she plays Tira, the come-hither lion tamer (supposedly without a stunt double) who controls the big cats as confidently as she controls her men, even dreamboat Cary Grant.

I’m No Angel, filmed in the weeks before and after Mae West’s 40th birthday, has a powerful autobiographical undercurrent. The opening carnival scenes harken back to Mae’s vaudeville days as a “cooch dancer” and her lowdown number “They call me Sister Honky Tonk” a reminder of her affinity for black blues and black musicians. Tira the lion tamer shares Mae’s birthday, August 17. And just like Mae, her fortunes rise from a tent to a penthouse. The trial echoes the many days Mae spent defending herself against morals charges in the NY courts, after writing and appearing in a play called simply Sex. And, the lion taming scenes fulfill a fantasy born during her childhood trips to Coney Island to see a famous wild animal act, Bostock’s Lions. 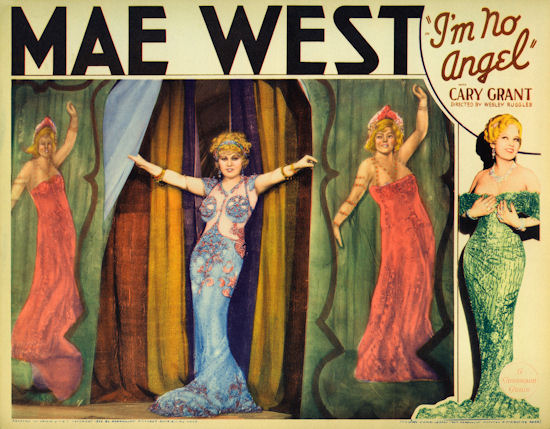 The Supreme Court had ruled in 1915 that motion pictures were not “free speech,” that they could be used for evil and that “The exhibition of motion pictures was a business pure and simple,” that the censorship of films was Constitutional.  Fearing government interference, an industry group wrote the Motion Picture Production Code in 1930, setting up a series of guidelines for filmmakers, much as movie ratings are assigned today. It was not strictly enforced until the Legion of Decency exerted pressure in 1934, and some film histories point directly at Mae West, although, of course it’s not entirely her fault. But, her wisecracking diva did drive the censors crazy. They could mark up her scripts, forbidding words like “jeez” “punk” “Lawdy” and lines like: “Tira is the only girl who has satisfied more patrons than Chesterfields,” but they could not police her intonation.

These Legion of Decency censors feared her assertiveness, as much or more than her explicitness. At the same time, one critic asked “How can a movie which satisfies a child of 12 be made morally safe for a man of 35? Thus far the censors have spent all their time protecting children against adult movies; they might better protect adults against childlike movies.”  In this comic book blockbuster age, this is certainly a complaint I would like addressed!

Mae began in vaudeville while she was still in her teens.  She had eye-catching costumes, naughty songs, and wise-cracks, some of which she wrote, some of which she collected and indexed.  Around 1917, she saw the “shimmy-shawobble”  in an African American nightclub in Chicago, and introduced it into her vaudeville act.  “Jazz suited me.  I liked the beat and the emotions.  The low husky blues, the wild shouting laments of love and pleasure—the sad bounce of lovers and jazzmen and the music of honky-tonks and hot spots” (Louvish 75).  She was not the first or the most famous dancer to do the shimmy, but it became one of her trademarks.  She was beginning to think that writing a play with herself in the lead was her best path to fame. 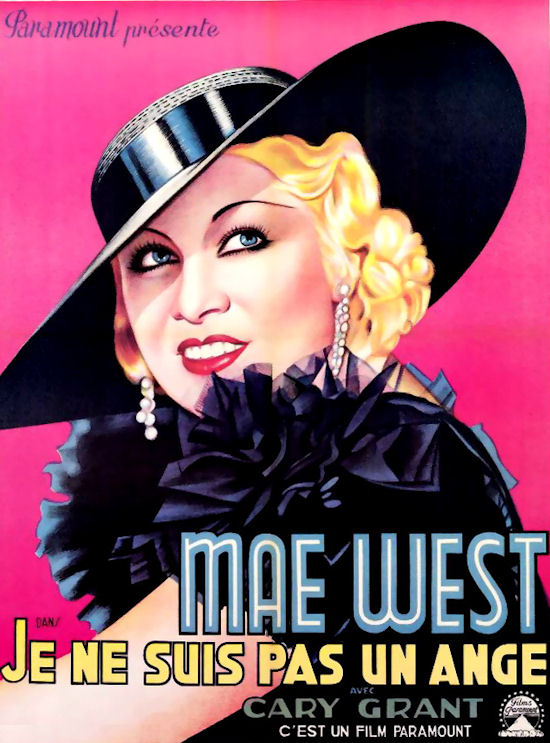 In 1926 she wrote a play called, frankly enough, Sex.  And, what was scandalous about it was not that it was about the loves of a dockside prostitute.  The scandal was that Margy Lamont refused to reform or apologize.  “Why ever since I’ve been old enough to know Sex I’ve looked at men as hunters.  They’re filled with Sex.  In the past few years, I’ve been a chattel to that Sex.  All the bad that’s in me has been put there by men.  I began to hate every one of them, hated them, used them for what I could get out of them and then laughed at them…” (Louvish 123).  The play was a hit because of Mae West’s sassy persona.  The men came to see her provocative performance, the women for her transgressive rebellion against the society that said that women are entirely to blame for sin.

The play made so much money that it funded her next one, The Drag, which revealed the homosexual subculture of the “Pansy Craze” to Broadway audiences.  Some speakeasies in Greenwich Village and the theater district catered to both a gay crowd, and to the straight people who wanted to drink and dance with them.  Although the play presented gay life as a problem needing to be solved, at the same time, a dance scene with 40 drag performers brought the house down every night, and theater goers lingered after the lengthy curtain calls to meet the actors.  Once again, it was not the text, but the performance that created the scandal.

Sex was raided and the actors and the production company were indicted for “producing an immoral show and maintaining a public nuisance” (Louvish 131).  Mae refused to close the play down, and after a jury trial she, was sentenced to 10 days in jail (two days off for good behavior).  This kind of notoriety is excellent for the box office, and after Sex closed, she wrote and starred in Diamond Lil. This play was a fantasy on Gilded Age New York, the turn of the century underworld and the colorful characters populating the Bowery saloons.  Lil is a gangster’s moll, an unrepentant good time girl, and she made Mae West a bona fide star.  She was blonde, buxom, glittering with jewels and she purrs her wisecracks, in other words, she is the character West would continue to play for the rest of her life.  Never content with her success, she wrote and staged another play on gay themes, The Pleasure Man, which would also be raided, although there was no jail this time. 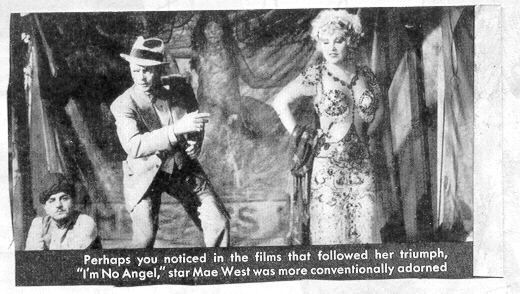 This is from my Aunt, Claire Drazin Bean’s movie star scrapbook. The photo must have been from an article about the advent of the Production Code.

After the stock market crash in 1929, Broadway revenues plummeted and Mae turned her eye to Hollywood.  Her first film was a small role in a George Raft vehicle, Night After Night.  He might even have invited her to the West Coast.   She and Raft both had connections to gangster New York Owney Madden (Raft had supposedly been a “runner” for his mob, and West, perhaps, his lover).  She played her usual character, and her two scenes were so memorable Raft said, “Mae West stole everything but the cameras” (Louvish 209).  “Motion picture actresses had always sold sex.  Mae West was the first motion picture actress to sell sex talk” (Doherty 182). But her next film would be the movie version of her most famous play; she would play the character of Diamond Lil, now called Lady Lou and the film would be titled She Done Him Wrong, to distance it from her scandalous play.  It was a huge hit, and West became Paramount’s top grossing star.

I’m No Angel was not based on any of West’s plays, which had the effect of distracting the censors.  She had already learned that she could compromise on language, and use her eyes, her voice and her hips to communicate what the censors could not discern on the page.  Mae’s pet monkey makes a brief appearance, as does her real-life maid, Libby Taylor, along with Hattie McDaniel (long before her Gone With the Wind Oscar) and Beaulah, Gertrude Howard.  Her Broadway plays had integrated casts, which was quite unusual for the day, and Mae herself seems to have had at least one affair with an African American boxer (she liked boxers).   As a heroine, she has some affinity with powerful matriarchs of black culture, and the tone of her speech mingles with her maids in a shared rebellion against the ruling class, in this case, men. In I’m No Angel kissing Cary Grant is less important than talking about kissing Cary Grant with her “home team”. Positive images of African Americans were something else that threatened the status quo.  Her attitudes were enlightened for her day, but of course are not nearly as progressive as today.  But, we can appreciate her efforts. 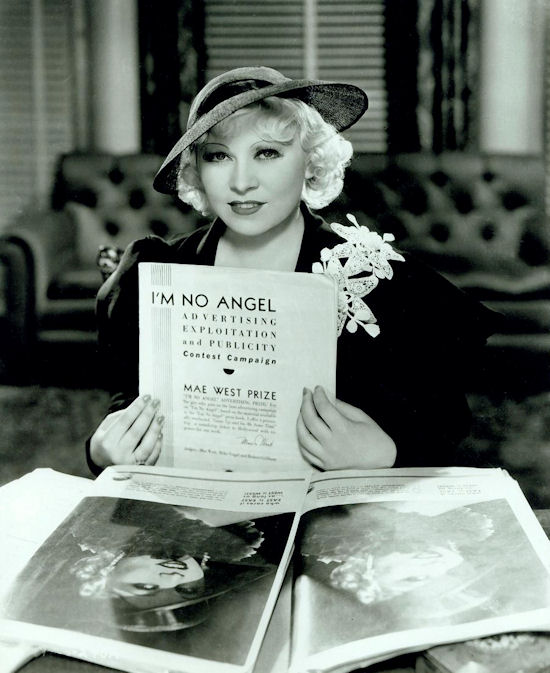 “Let nature take her course…When you sell curvaceous, gold mine Mae West, keep the copy short and quotable. People like to tell each other what Mae West said; and the whole nation is making love with Mae West nifties. Soon sweethearts will replace “you can be had” with “You fascinate me–you do,” and the box office will give them its blessing.” (Louvish 238).

Mae West always claimed to have discovered Cary Grant, which wasn’t true.  He had already appeared in several films, including opposite Marlene Dietrich in Blonde Venus.  These early leading roles in She Done Him Wrong and I’m No Angel were helpful to his career.  His performances are a little stiff, as he had not yet developed the charming persona that we associate with his star image.  That was in the future, when Leo McCarey directed him in The Awful Truth.  His role was to be straight man to her wisecracks. Pauline Kael thought that served the films well, bringing out, “a quality of refinement in him which made her physical aggression seem a playful gambit” (McCann 74). 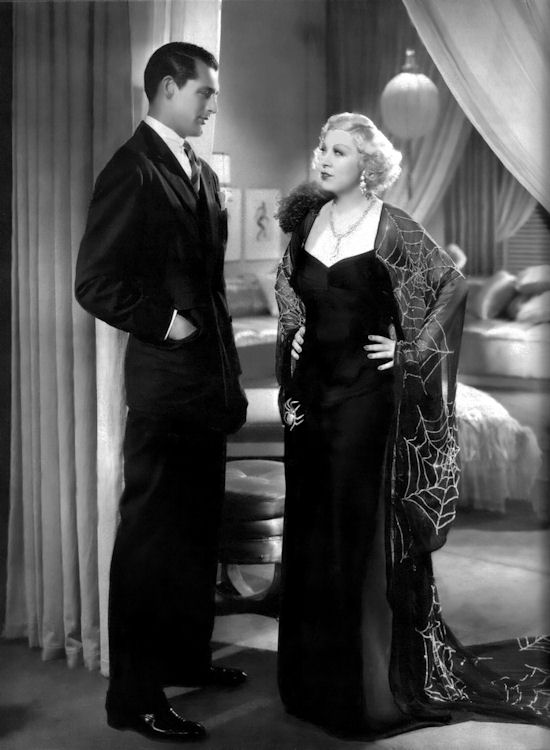 Mae blurred the line between biological and cultural femininity. She makes a spectacle of her lustful middle-aged desires in a world that values youth, where every woman is alluring and every man can be had. Her sultry persona was adapted from a famous female impersonator in vaudeville named Bert Savoy, whose catchphrase, “You MUST come over,” foreshadowed Mae’s “Come up and see me” (Leider).  There’s coded language in her films, too. When she says, “I like sophisticated men to take me out,” the meaning is: “apparently straight, but open to suggestion.” Parker Tyler, a pioneer of cinema’s sexual subtexts called her “the Mother Superior of the Faggots”. When the Production Code banned “sex perversion” they meant no gay characters, no gay subtext.

In 1934, Mae West was the 5th most popular star in the country, and earned more money than any woman in America. If she had not exactly saved Paramount from bankruptcy single handed, she had she certainly was a decisive factor.

When asked what she thought of the censors, Mae cracked: “Tell them they made me what I am today. I hope they’re satisfied.” (Doherty 187). 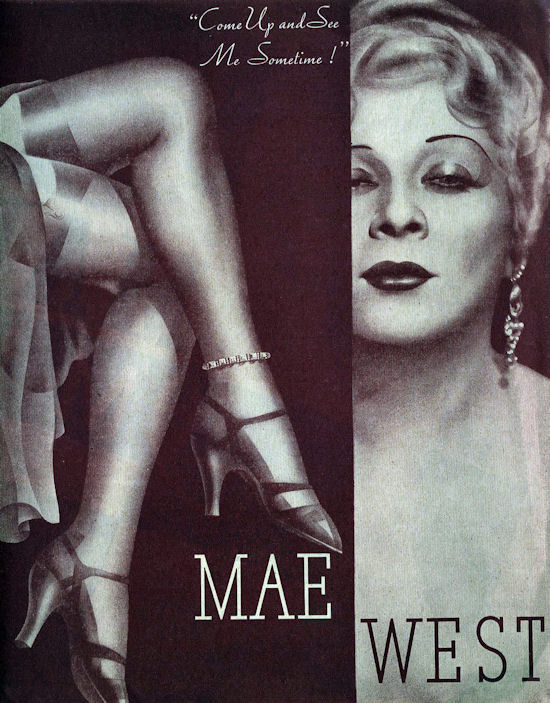 Becoming Mae West by Emily Wortis Leider, Mae West:  It Ain’t No Sin by Simon Louvish, Pre-Code Hollywood  by Thomas Daughtery, Sin in Soft Focus by Mark Viera, She Always Knew How: Mae West by Charlotte Chandler. NB: Sorry for the quotations without references, I wrote this for the first time 20 years ago!